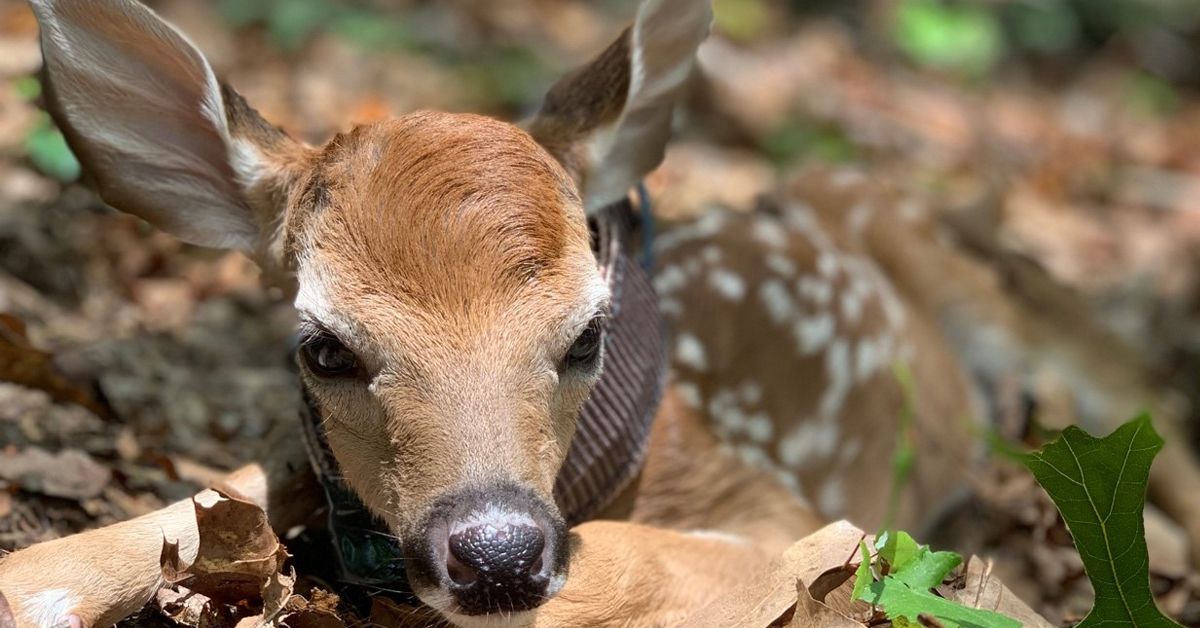 Fawns are affixed with radio collars that are made to expand as the fawn grows. The collars eventually degrade with exposure to weather, falling off of the animal over time.

The history of white-tailed deer management across the state of Virginia is a success story all its own, with conservation practices dating back to the 1730s. These efforts arose from concerns of overexploitation of these animals, and the valuable, everyday resources (i.e. venison and clothing) they provided Virginians during that time.

However, many of the early regulations on harvesting deer didn’t apply to folks residing in settlements west of the Blue Ridge Mountains, as pioneers continued to depend on the animal as a means to survive as they forged new communities within the region. As deer populations experienced vast declines into the early 1900s due to the rise of market hunting and the commercial trade of game hides, native deer herds were essentially extirpated from the entire western half of the state. However, remnant populations of Virginia’s native herd found a way to persist in Bath and Highland counties, presumably due to large patches of deer habitat scattered across rugged terrain with poor accessibility to hunters.

Elsewhere, restocking became a staple practice in white-tailed deer restoration during the early and mid-20th century. In the meantime, poaching was curtailed through stronger hunting laws and better law enforcement, combined with the decline in subsistence farming, began to bolster and improve these detached deer populations. Fast forward to the late 1980s and Appalachian counties in northwestern Virginia had some of the highest concentrations of deer anywhere in state.

Today, many of these same counties have experienced significant declines in deer numbers, especially on public lands; however, we don’t know all the reasons why. Could it be primarily attributed to an influx of predation rates due to high populations of American black bears or the rapid eastward expansion of coyote populations? Potentially.

Perhaps the phenomenon is related to poorer habitat due to aging forest and a lack of habitat manipulation practices? It could be.

How about hunting seasons and bag limits designed for the more productive private lands that may impact deer on public lands?  Maybe all of these (and other) factors are working in conjunction to acerbate the declines? The extents of these biological processes can only be measured through extensive field research, which is warranted in order to address these questions.

With a multi-year research project focusing on Appalachian carnivore ecology already underway within the same area, researchers at Virginia Tech (VT) and biologists at the Virginia Department of Wildlife Resources (DWR) saw a fitting opportunity to initiate a project focusing on deer population dynamics in Bath County, Virginia.

Hence, with funding provided by DWR through the Federal Wildlife and Sportfish Restoration program, the Virginia Appalachian Deer Study (VADS) was initiated in March 2018. Dr. Michael Cherry, Assistant Professor in the VT Department of Fish and Wildlife Conservation, serves as the lead principal investigator for the project, hiring PhD student Garrett Clevinger and MS student Gisèle Aubin to assist in research operations. Research is being conducted on three areas located within the county: Gathright Wildlife Management Area (owned and managed by DWR), Hidden Valley Recreation Area (owned and managed by the U.S. Forest Service), and Warm Springs Mountain Nature Preserve (owned and managed by The Nature Conservancy).

The three sites provide researchers with a diverse mix of habitat types and landscape variables to incorporate into analyses, with many areas actively managed using prescribed fire and various timber harvest regimes.  The primary goals of the study are two-faceted in that we aim to tackle both fine-scale and broad-scale concepts in white-tailed deer management.

In order to better understand fine-scale population characteristics, such as variations in known cause of death (e.g. predation, disease, accidents, etc.), habitat selection processes, and survival related to specific habitat characteristics, VADS has been capturing and equipping deer with GPS tacking collars. While bucks and juvenile does are ear-tagged and released, adult does are primarily targeted. 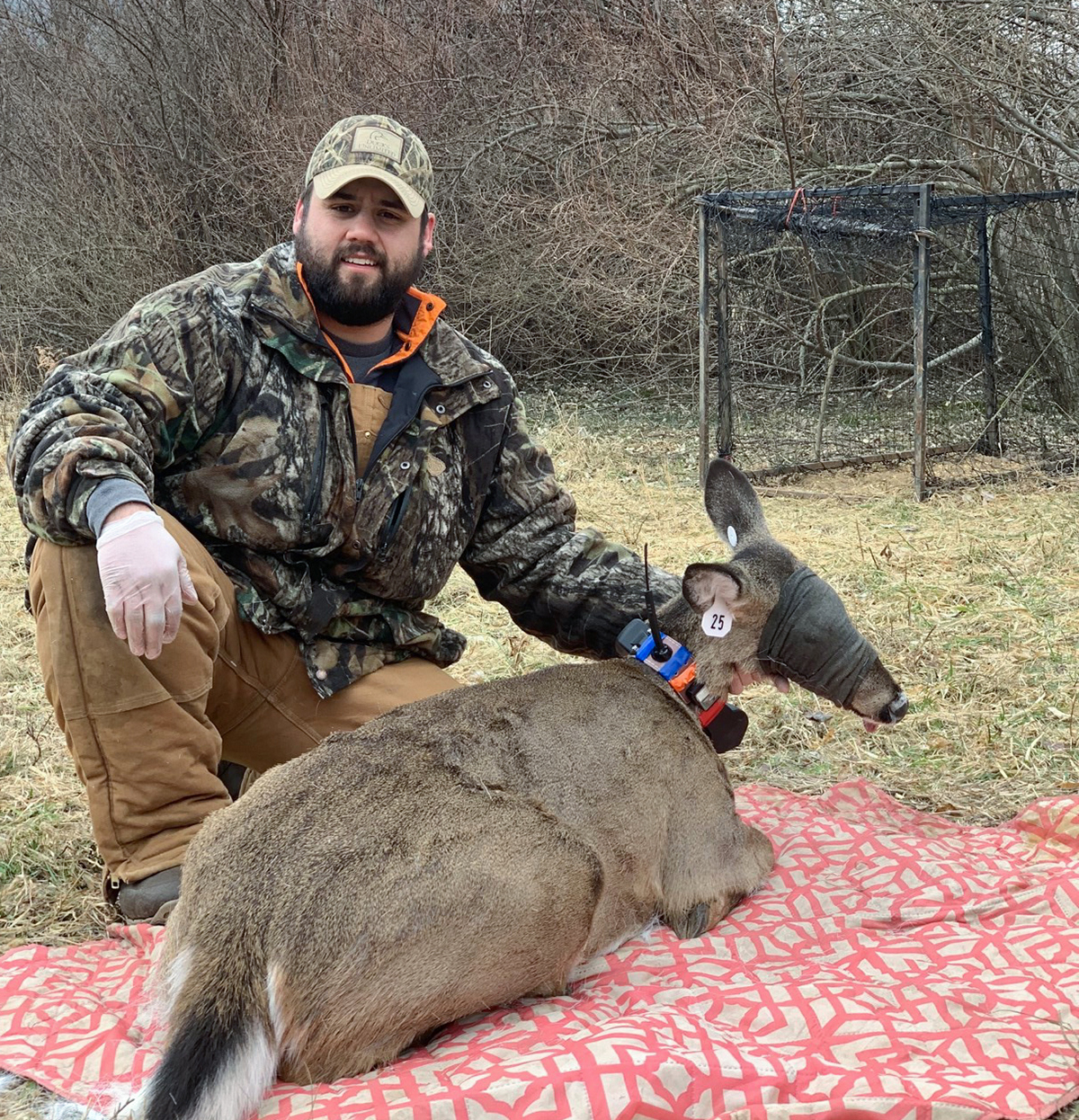 Special tracking devices are strategically implanted into pregnant females, which allow researchers to capture and collar fawns during the late spring and early summer. The vaginal implant transmitters (VITs) give off a unique radio signal (similar to what the tracking collars emit when a deer has died) that alerts research personnel that the transmitter has been expelled from the doe.

Once an expulsion signal is detected, crews will then attempt to capture the fawns from the expulsion site. Special “event timers” transmit the signal in code, which allows researchers to decipher (within 30 minutes of the drop) when the transmitter discharged from the animal (i.e. when the fawns were born).

Fawn survival will be determined by manually checking collared fawns at least three times per day for the first four weeks of life and at least once a day until 12 weeks of life. As deer are typically most susceptible to predation within the first few weeks of life, we will be able to determine variations in how most deer die in Bath County. 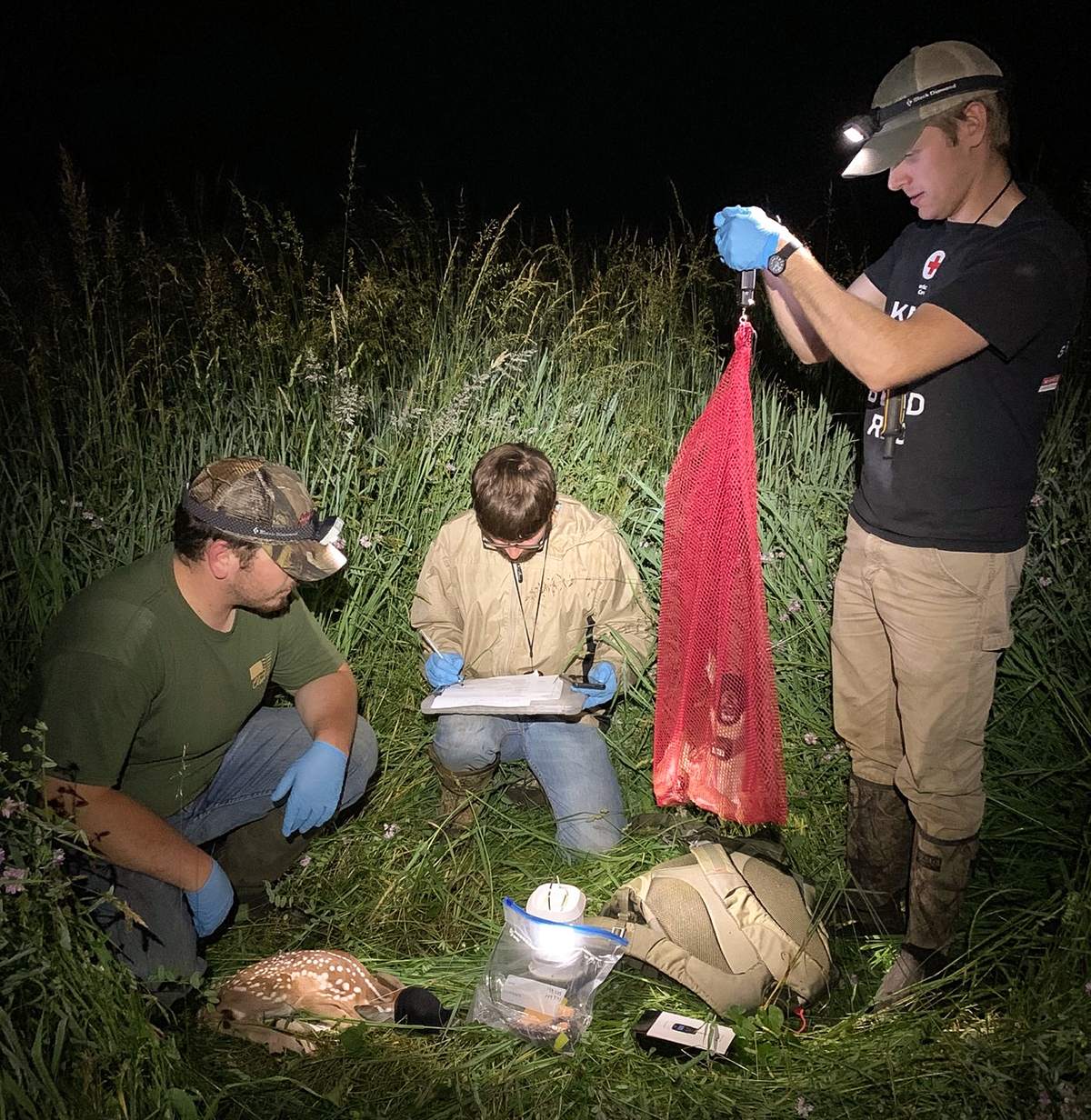 Using tracking collars specifically designed for fawns, which degrade and fall off of the animal over time, we are able to quickly investigate mortalities to better determine the actual cause of death. If the cause of death is suspected to be from predation, personnel will attempt to obtain predator-specific genetics data from the kill site by way of saliva left on the remains of the carcass, strands of hair, and/or fecal matter.

Furthermore, due to the high resolution of locations obtained from the collared does (fixes obtained every hour), we will also be able to better understand how deer are moving and selecting habitats before, during and after the fawning season. In areas that have an active rotation of habitat management practices (e.g. prescribed fire, timber management), previous research suggests that does will often select habitats having less than optimal nutritional quality as a means to provide their fawns with adequate cover from predators. For example, while freshly burned areas typically produce higher quality deer forage, they initially reduce the amount of suitable cover needed to protect fawns against predators like coyotes, which hunt best in areas with open understories having the least amount of vegetation as possible. These processes are of great importance to wildlife managers, as they provide information that serves as the basis for habitat management plans.

The VADS aims to develop a modern method for estimating key population dynamics by using motion-triggered trail cameras. By incorporating cameras into the study, we will be able to directly compare estimates obtained from real, marked individuals to those quantified from images of deer within Bath County. This will allow researchers to validate the efficiency of estimating key population drivers using the cameras, as both methods will be used simultaneously on the same deer at the same time.

While trail cameras have been used for decades as a useful tool in deer management, recent findings suggest that traditional camera-based monitoring practices may ultimately produce skewed population estimates. These biases primarily manifest themselves as a byproduct of attracting deer to camera stations using bait, as certain age/sex classes may be more or less prone to visit sites as a result.

For example, older bucks may become territorial of bait stations at cameras, often defending areas from subordinate individuals. More importantly, these traditional approaches only have the capability to estimate abundance and the area surveyed is unknown.

Furthermore, unlike traditional methods that may only use lactation data or doe/fawn ratios to get at recruitment, camera-based population monitoring allows researchers to quantify the density of recruits within a certain area, thereby providing a better understanding of the ecological traits (e.g. habitat qualities, predation risk, etc.) of each study area that may be positively or negatively associated with fawn rearing success.

Using this unbiased, camera-based monitoring approach, population estimates are derived from “capture histories” of each fawn observed within a set of camera images by using their unique spot patterns as a form of identification. Similar to traditional camera-based population monitoring methods, bucks are also individually identified in the same manner via unique antler characteristics. Combining statistics with the capture histories of individuals, researchers are able to produce survival and recruitment rates as if multiple individuals were physically captured, equipped with expensive tracking collars, and manually monitored over time.

In summary, while traditional capture studies will likely always have important applications in wildlife research (such as understanding variations in common types of mortality), these newly developed methods now allow researchers to also address questions concerning spatial variations within these population dynamics.

Beginning in May 2018, our crew strategically placed trail cameras across each of the three study areas in Bath County. At the conclusion of the 2018 camera trapping season in late September, personnel cataloged a total of 13,428 images of deer across the three study grids (Gathright WMA – 2,899, Warm Springs Mountain – 2,242, Hidden Valley Recreation Area – 8,287). Of those images, 1,500 were of spotted fawns and 2,077 were of antlered bucks.

Along with images of deer, the trail cameras also captured a total of 3,318 images of bears, 158 images of coyotes, and 70 images of bobcats. It’s important to note that some of these images could be of the same animal several times. Currently, research personnel are hard at work attempting to uniquely identify individual bucks and fawns from these datasets so that they can begin to run population models. Cameras were redeployed in May 2019 and continued to collect images in the same manner through 2020.

From January-May 2019, we were able to successfully capture a total of 46 adult deer consisting of mature bucks (i.e.  2 years), juvenile bucks (i.e.  1.5 years), mature does, and juvenile does. We equipped 21 pregnant does with GPS tracking collars and internal transmitters for the upcoming fawning season. From those, we successfully captured and collared a total of 21 fawns. Moreover, we were also able to opportunistically capture and collar a total of 14 additional fawns from June 11 and July 5 by way of transect searches through open fields and random sightings. 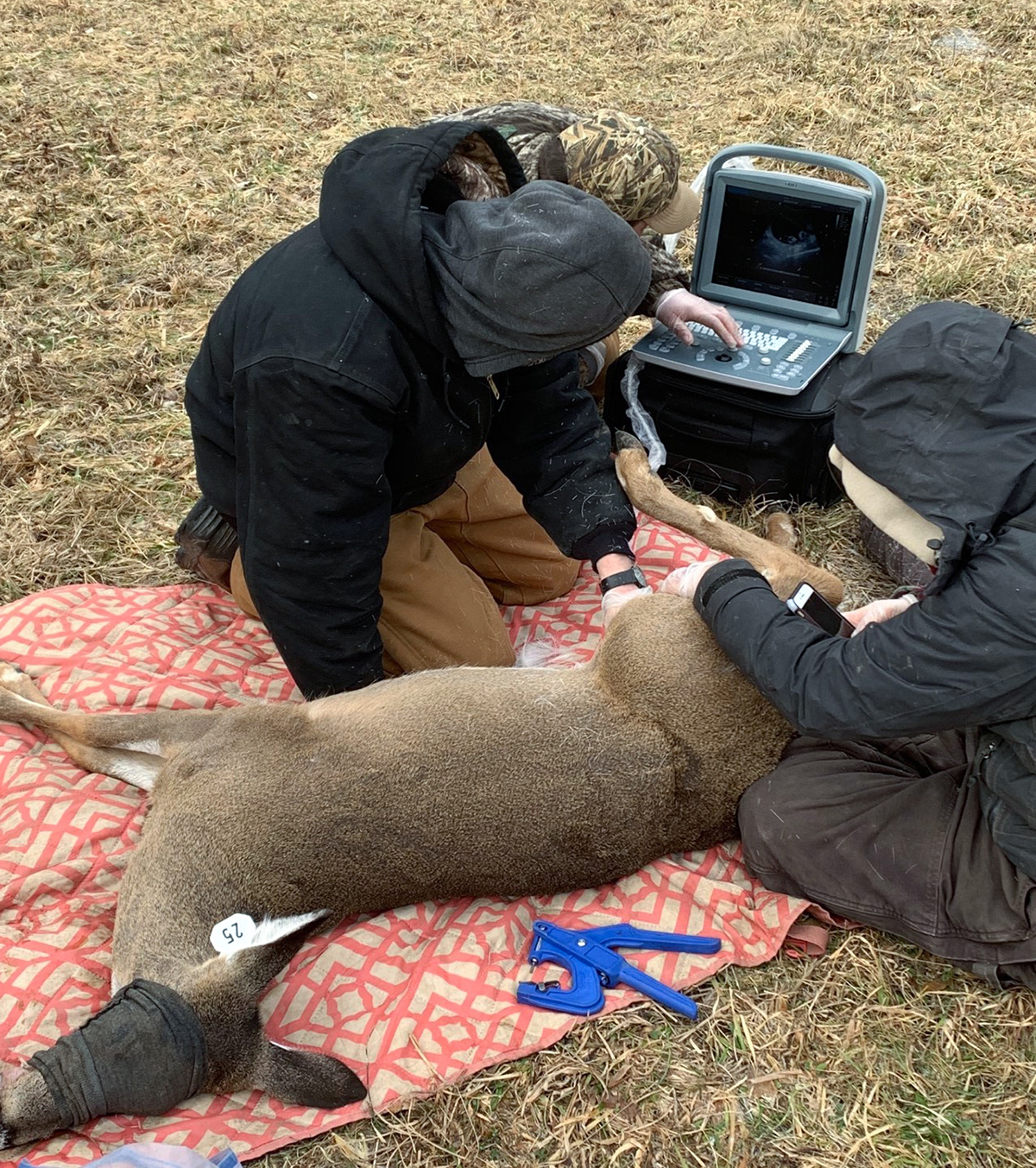 Garrett Clevinger observes for fetus presence using a portable ultrasound machine while field technicians Braiden Quinlan (left) and Abby Stone (right) assist in the work-up process. Once pregnancy is confirmed, a vaginal implant transmitter (VIT) will be implanted into the doe to aid crews in fawn capture during the summer.

Based on our sample, peak fawning for the 2019 capture season fell on June 17. To date, the field crew has investigated a total of 22 fawn mortality events, with predation suspected as the primary cause of death. The project is currently awaiting confirmation from genetics laboratories before assigning a specific predator species to each event.

As the 2019 field season came to a close, the study began to focus heavily on analyzing the data obtained from both collared deer and deer captured on trail cameras. The project will continue to employ the help of undergraduate volunteers at Virginia Tech, as tagging and organizing camera photos will be a primary task. As analyses are completed and various goals of the project are met, the results of the research will be presented to the public.

Moving forward, we aim to provide updates on the progress of the study to VDHA. In efforts to remove harvest related biases from our survival estimates, we ask readers who may be hunting this season to treat marked animals (i.e. equipped with collars or ear tags) as if they were not marked at all. In other words, please do not let these markings dictate whether or not you harvest the animal if the opportunity presents itself.

If you do happen to harvest a marked individual, please be sure to call the number provided on the collar or contact VADS research personnel at vtappdeerstudy@gmail.com. We are very appreciative of the VDHA for their generous support of this research.

Garrett Clevinger is a Virginia Tech Student working on his doctoral degrees. Garrett was one of three students to receive the 2019 VDHA Scholarship Grants.