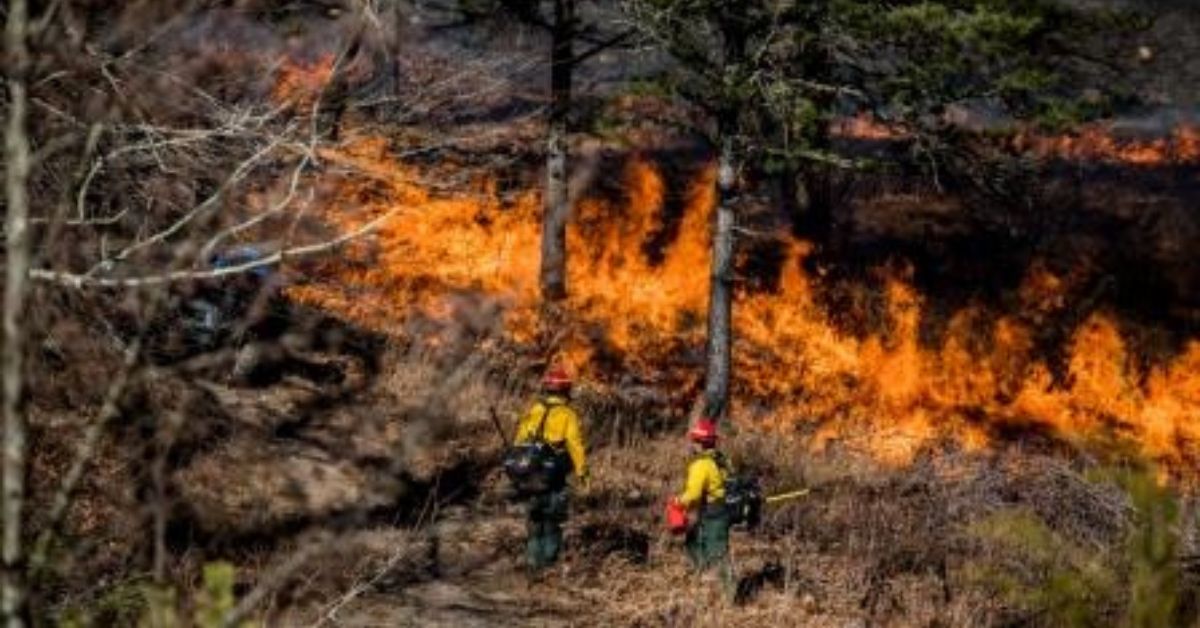 Timing a prescribed burn involves balancing the long-term reward of habitat management with the possible short-term risk of harm. Photo by Meghan Marchetti

The topic is inevitable. Every time there is a discussion about prescribed fire in Virginia, questions arise about the reasons why we burn at that specific times of the year.

Almost all of the habitat management manipulations that biologists and land managers utilize come at a cost. Many habitat management techniques will be bad for one or more species (usually on short-term scale) but will be more beneficial for other species or even the species hurt initially in the longer term. The decisions of how to best apply these management techniques really comes down to a cost-benefit analysis.

In short, what cost will we see with a management technique and what will the reward be? Is that reward greater than the cost? Biologists and land managers constantly wrestle with these decisions to make the most of the limited supply of habitat we have in our control. The decision matrix for deciding when to conduct a prescribed burn is no different and must be carefully considered.

The first and most important focus of any prescribed fire program has to be safety. As we see on the evening news, fire can have devastating impacts if not utilized properly. If we are going to use fire as a tool we have an obligation to do so safely. There is a complex equation that must be factored into the safety of a given burn that includes many factors like the amount and type of fuel and the weather conditions that are predicted. If the weather is outside of the safe parameters we cannot safely burn.

On the other end of the spectrum, there are days that would be very safe but we would not be able to get a fire to burn or to burn hot enough to provide the desired result. Similarly, we have to make sure that the smoke from our fires are not causing undue impacts to local communities; we have to make that we are not blowing smoke into roadways or population centers. We find ourselves looking for those Goldilocks type days when all conditions are right, and unfortunately those days are limited through the year. Often the ideal conditions for safe and effective prescribed burning are found during the spring and fall months.

In order to make the desired changes to the plant communities, we have to produce enough heat to kill certain plants. The time of year can greatly affect how plants will respond to these changes due to the biology of how and when plants are transferring nutrients through their stems or trunks. For example burning in the late fall and winter (often called the dormant season) will rarely kill hardwood trees or saplings. As a result, prescribed burns conducted during the dormant season tend to have higher densities of hardwood saplings and usually do not provide for a significant change in the flowering plants and grasses desired by many of the species we hope to benefit through the burning program.

By waiting until the growing season (spring or summer), more hardwood saplings are killed and as a result it encourages more grasses and flowering plants, which is good for many species such as white-tailed deer, bobwhite quail, and wild turkey. In addition spring fire can favor oaks regeneration as oaks have a number of adaptations that help them flourish following a fire.  These flowering plants greatly increase the insect abundance, which is ideal for young turkey, grouse, and quail chicks that feed almost entirely on insects and also for more succulent, and palatable forage for deer. Burning late in the growing season (September or October) can have good effects as well, but creates another issue in the loss of cover for overwinter survival. In steeper and more rugged terrain, this can also increase the amount of erosion over the winter season. Knowing the specific needs or management challenges of the species we are trying to manage helps to guide our decision on the timing of specific burns.

One of the greatest criticisms we receive over our prescribed fire program is that we often burn when ground-nesting birds are breeding. This is certainly an issue that deserves a critical discussion.  In short, yes, there are occasionally nests that are destroyed by fire. However, there are several factors that need to be considered. In smaller scale burns (less than 100 acres) the odds that a bird is nesting in a given burn unit are pretty low. As the prescribed burn unit size increases, so do the odds that nests are present. Research conducted on wild turkey throughout the Southeast has shown that very few nests are destroyed as a result of prescribed fire and that other factors are far more likely to cause nest failure.

While nests may occasionally be lost, there are many areas that do not burn or may not burn as intensively and may allow nests to survive. For example, many turkeys choose to nest near streams; due to the tree species and associated fuels found in many of these areas, fire intensity is usually limited, often remaining completely unburned and allowing for these nests to remain unharmed.  When a nest is destroyed by fire, many species such as wild turkey and bobwhite quail can re-nest in a new location and have a good chance to still successfully raise a brood of chicks. Quail for example can re-nest many times through the nesting season and often will raise multiple broods of chicks per year. Other birds are not as good at re-nesting and the long-term impact of burns for those species is not as clear. 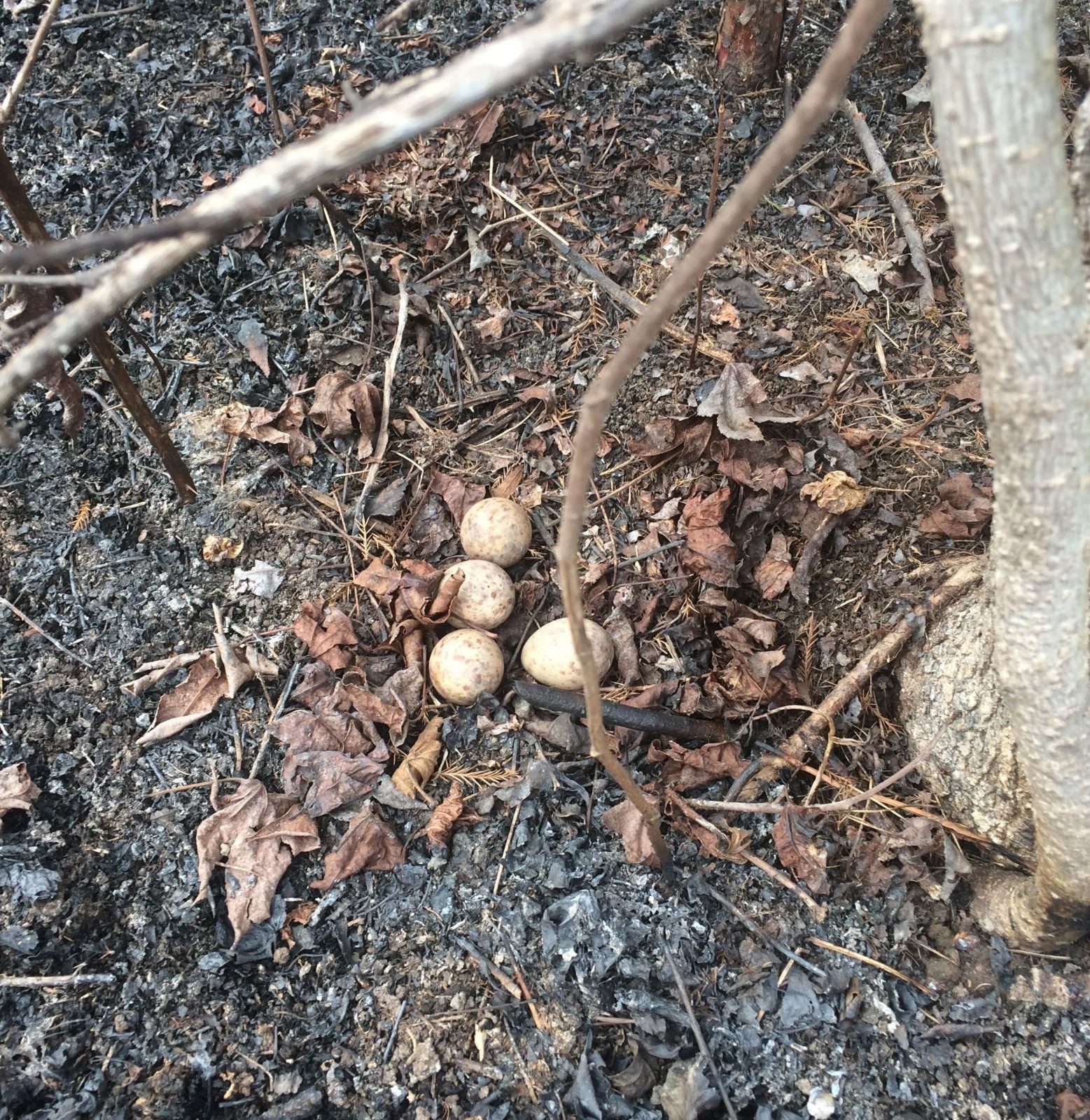 Woodcock eggs laid in a nest after a prescribed burn at the Featherfin Wildlife Management Area. This clutch of eggs successfully hatched.

There is a considerable upside to the use of prescribed fire. Areas that start off charred and black will quickly re-sprout with fresh new growth, usually in much greater abundance than before the burn.  These are often flowering plants that will attract an abundance of insects (the primary food source for growing chicks) while also providing for structure that is closer to ground level, providing greater protection of chicks as they forage on the insects.

For many of these species, increasing the brood survival is just as, if not more, important than increasing hatching success. A failed nest may cost one year’s loss of productivity in an area, but if that area lacks adequate brood-rearing cover to begin with, that brood of chicks may just as easily be lost to predation, exposure, or malnutrition after hatching. By enhancing the vegetative structure and diversity we can provide a greater chance of chick survival not just for that year, but for several years after the burn. In fact many species of shrubs and bushes produce more fruit two to five years after a prescribed fire. This allows the hen to remain in a smaller home range, which further reduces the chances of chicks being exposed to the threat of predation. This increased nutrition also allows the hen to enter winter in improved physical condition, which is a considerable factor in future nesting success. The short-term losses that might occur from a burn will be minor compared to the gains in productivity and survival that we expect after a properly executed prescribed fire.

As we use fire, we are continually learning how to be more effective in applying it appropriately. We have a constant watch on the latest research on how our management will affect wildlife. The absolute last thing we want to do is further hurt wildlife that may already be struggling to survive. As that research continues to teach us, we will be tweaking our programs through time. The changes may be small, but we are committed to making sure we are doing it right.

As a last thought to leave you with for the day, #goodfire was present here in North America before the early indigenous ancestors carried it across the Bering Land Bridge. The indigenous people embraced the use of fire for many purposes and learned to use it to advantage the landscape, the wildlife, and themselves. Unfortunately much of that knowledge has been lost through history, so we are having to relearn how to use fire and to do so in a much more complex world. Our wildlife evolved with and around fire, it is an important tool for the management of these species, and the lack of fire on our landscape is contributing to more species declines than the use of fire.