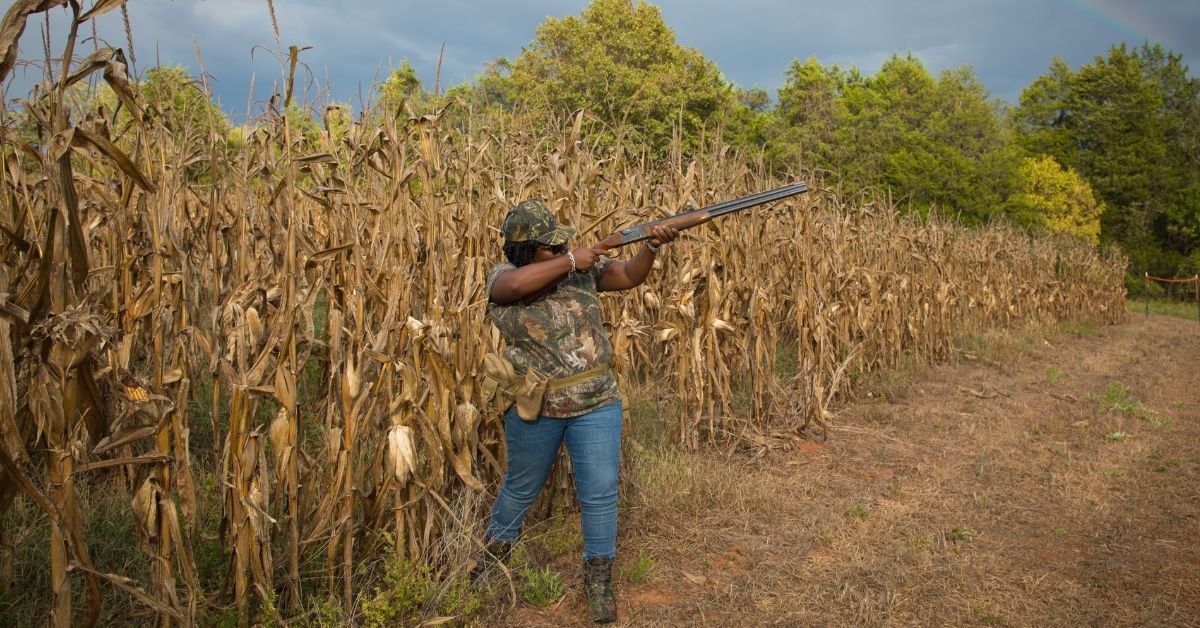 Tracking the swift gray bird as it swerves and dives through the azure sky, you squeeze the trigger. A puff of feathers floats softly through the air. The first dove of the season is in the bag!

Oil up your shotguns, gather your shells, and shoot a few practice rounds. On September 4, dove hunting is here! While mourning doves can be hunted during several different seasons lasting into January, for most Virginia sportsmen, this gamebird is particularly appealing because it offers some of the first wing-shooting of the year.

To help you score on more doves and enjoy the hunt more, here are some tips for harvesting this intriguing gray gamebird that swoops magically through autumn skies with its powerful wings and long, pointed tail.

● Make sure you have your current hunting license either on you or stored in your GoOutdoorsVA app. Be sure you know the bag limits, season dates, and hours.

● Pre-scout before the season opens. Spend at least a couple of afternoons scouting before dove season opens if possible. Stay back far enough that the doves aren’t alarmed by you or the vehicle and simply watch, using both your naked eyes and binoculars. You’ll see most flying activity from 2 or 3 p.m. onward. Try to figure out what routes the birds are using flying into fields and pick out several prime ambush points.

● Focus on the right stand locations. When choosing a site for a dove stand, search for spots that are different than the surrounding habitat. Look for a lone tree sticking up along a fence row, a point of unplowed weedy land jutting into a cultivated field, the corner of a field where it adjoins woods, a dip or gap in an otherwise straight line of treetops. Take your stand close to these spots and you should enjoy steady shooting. 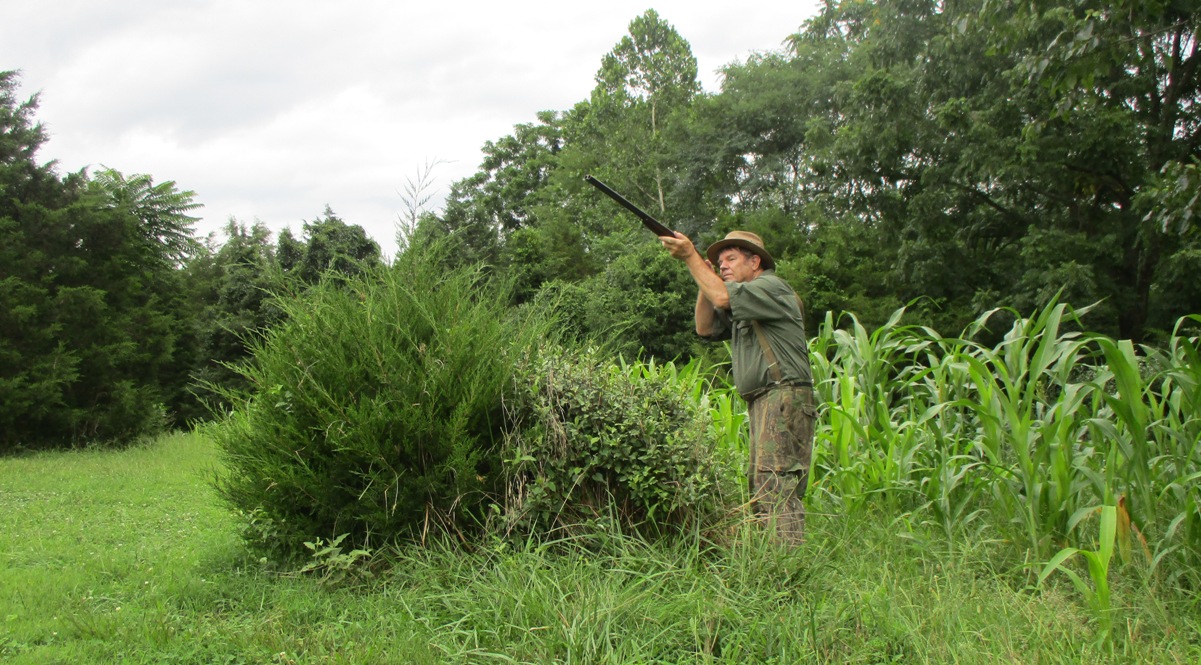 Finding the right spot can help you have a successful day dove hunting. Photo by Gerald Almy

● Choose the right load. Doves are strong enough to fly hundreds of miles on migrations, but they’re actually small-bodied birds weighing just a few ounces. Because of this, early season doves are brought down easily with a light load of #8 shot—if you aim straight! For late seasons and stronger birds, go with size 7 ½ shot in heavier high brass loads.

● Use the right gauge. Dove guns can range from $100 single shots to $5,000 European side-by-sides with ornate gold engravings. More than cost, what matters is that the gun feels comfortable to the shooter and fits correctly. Any gauge from 12 to 20 works fine. Only expert shots should use a 28 gauge or a .410 because of the smaller number of pellets.

Often those light guns are given to youngsters with good intentions, but they make it supremely difficult for a novice who is just learning shooting skills to connect successfully on his or her quarry. Stick with a 16 or 20 gauge if you have a young or small-framed hunter you are introducing to the sport. The “kick” from these guns is very modest. Most average-sized hunters will be happiest with the 12 gauge.

● Select the optimum choke. There is no single best choke for dove hunting. In some situations a wide-open skeet bore is good if birds are coming to a water hole or passing 15 to 25 yards from your position. For a more typical situation of pass-shooting birds at random distances, go with improved, modified, or—in a double—a combination of those two chokes.

● Wear camo or drab clothing and avoid movement. Blaze orange has its place in hunting, but not dove hunting. These birds see color and will flare when they detect bright-hued clothing that sticks out from its surroundings. A tan or olive-colored outfit is just as good as camouflage. 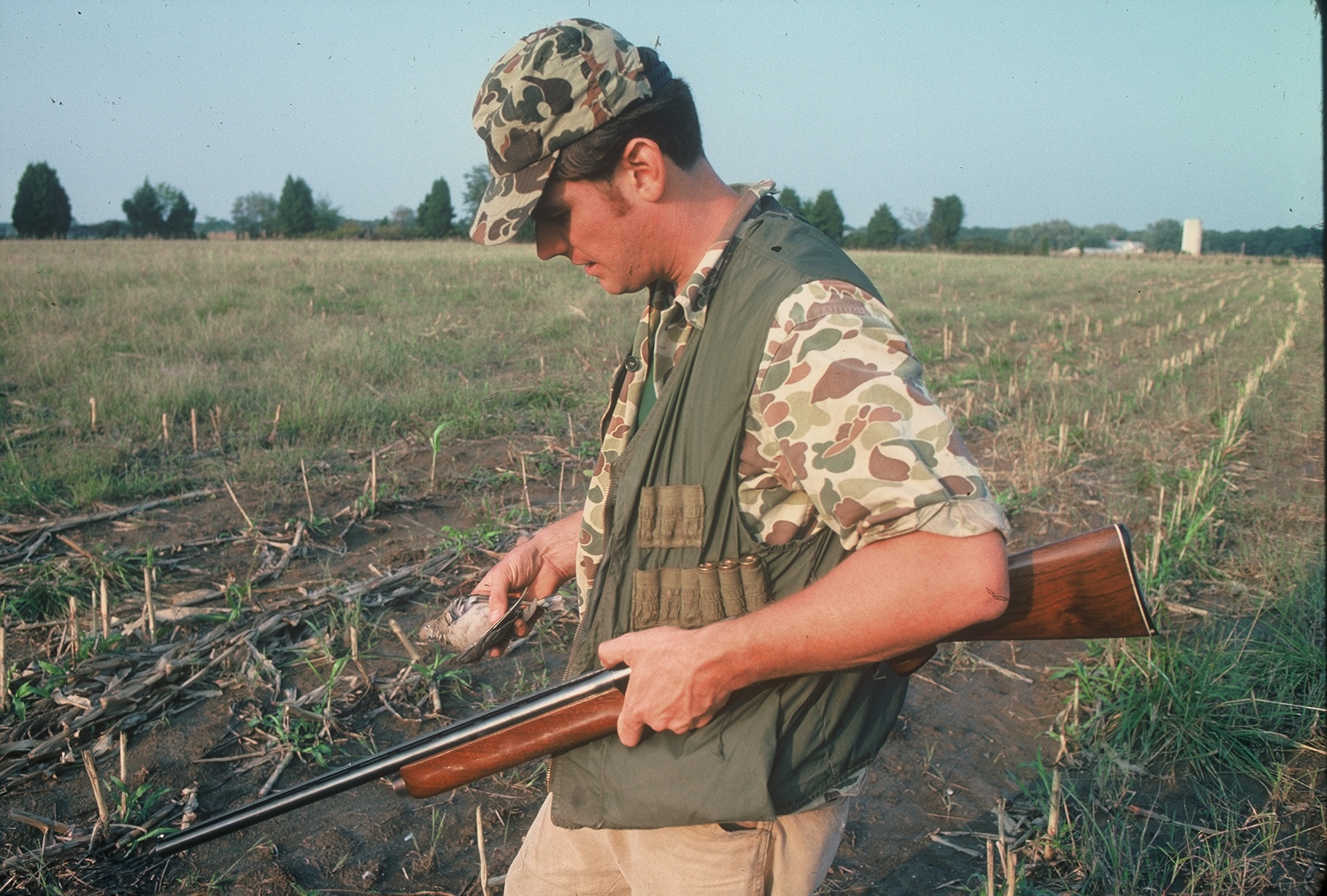 Dove hunting attire is all about blending in. Photo by Gerald Almy

● Avoid moving when a single bird or flock is in view. After they’ve been exposed to a bit of shooting pressure, doves become particularly wary and will flare if a hunter moves around while on stand.

● Hunt early and hunt late. The first few days of the season are usually most productive for hot-barrel dove shooting. The birds have not been shot at much and they often fly close, presenting easy shots. Another reason to be in the field during these early days is that lots of other hunters are out. That tends to keep the birds moving from field to field, giving you more shooting opportunities.

● Locate the food. Good crop fields for doves include cut corn, peanuts, millet, sorghum, milo, and sunflowers. Weed seeds such as thistle and croton are also favored by these birds. Find what the doves are currently eating and where it’s available—that’s your key to steady shooting. 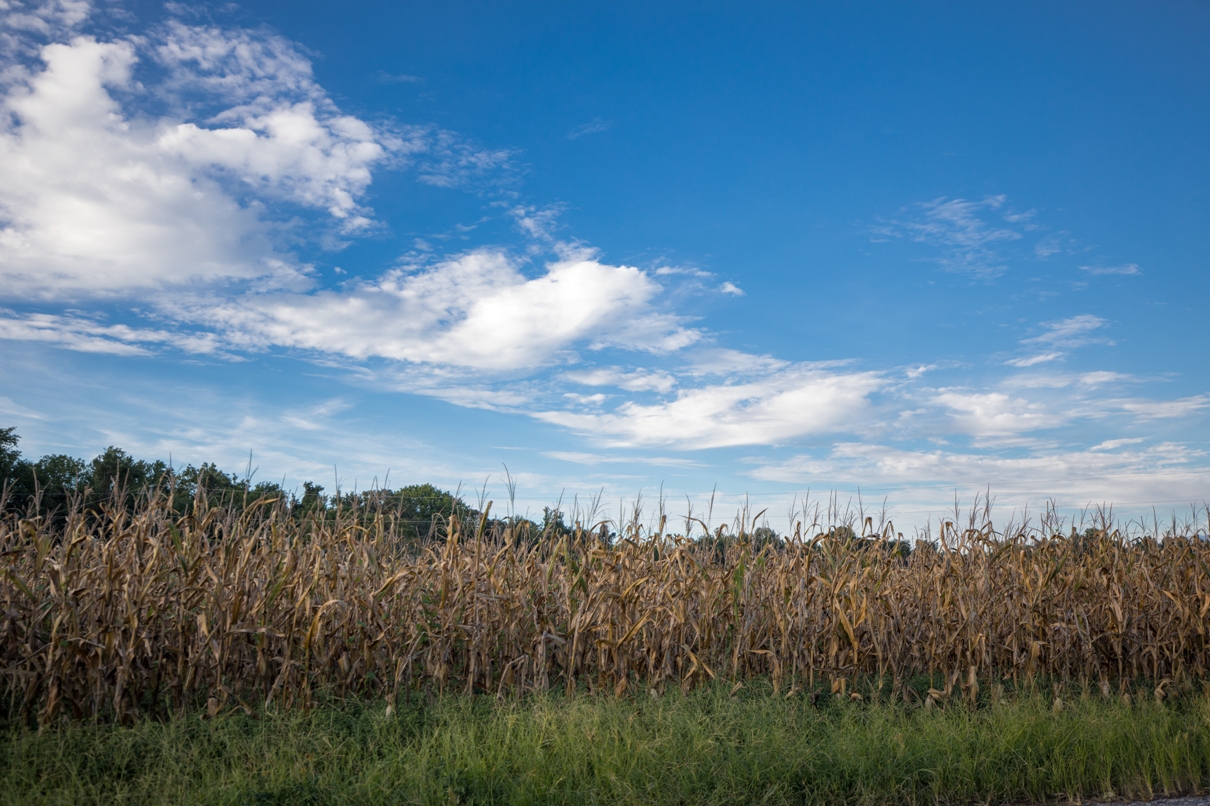 Finding where the birds are eating is the key to finding doves. Photo by Meghan Marchetti/DWR

● Don’t stash your dove gun away after the opener, though. That’s a big mistake. By scouting, you can find fields with lots of birds that have settled down and have little competition for them. The late season can also be good as birds move through Virginia from northern states.

● Bring the right stuff. Gear for a dove hunt should include ear plugs, sunscreen, insect repellent, a hat with a brim to keep the sun out of your eyes, snacks, cold drinks or water, a cooler with ice, binoculars to track dove movements, and shooting glasses or polarizing sunglasses. Decoys are an optional item you can add to the list.

● Avoid low-angle shots. This is vital for safety during a dove hunt. A low-angle shot could send your pellets towards another hunter’s position. Pass up those birds. There will be plenty of others.

● Don’t stop your swing. This is one of the most common mistakes in shooting doves. Pull up on the bird, keep your cheek down tight to the stock and fire as the barrel covers and starts to swing past the quarry. BUT KEEP SWINGING. If you don’t, you’ll surely send a wad of pellets flying through the air behind the quarry. Doves are fast!

● Avoid shooting at waterholes. You can hunt a water hole or pond currently being used by doves and enjoy fast and easy shooting. But if you want the birds to keep using it, set up instead on the main flyway they use approaching it and pass-shoot. That way they won’t associate the pond with danger and avoid it. No need to burn out a good spot with just one afternoon’s shoot.

● Carry a seat. When dove hunting, a small fold-up stool with a compartment built in beneath the seat is a handy item to have. You can put extra shells, sunglasses, a drink, sandwiches and energy bars in the compartment and use the seat to reduce the strain on your legs and back throughout the long afternoon. Alternately, you can take a large plastic paint bucket and camouflage it. Carry your gear in it for the hike in and out and use it as a seat during the hunt.

● Watch for flurries of dove activity. Some hunters think all the best shooting will occur in the final hour or two of daylight. That’s not always the case. Often throughout the afternoon there will be “flurries” of dove activity when several groups of birds fly in and out of fields for 10 or 15 minutes, followed by a lull in activity. Be ready when those waves of flights occur and you’ll be well on your way towards a limit even before the last afternoon crescendo of action takes place.

● Don’t raise your gun too soon. If you do this, you lose the natural swinging motion that makes wing-shooting a fluid, rhythmic activity of raising the gun, aiming, and firing. Another problem with raising your gun too soon is that the birds might see your movement and flare out of range or swerve, making for a more difficult shot. Wait until the dove is just about into shooting range, meaning 40 yards or less, and then raise the shotgun in one smooth motion, firing as the barrel tracks ahead of the target. 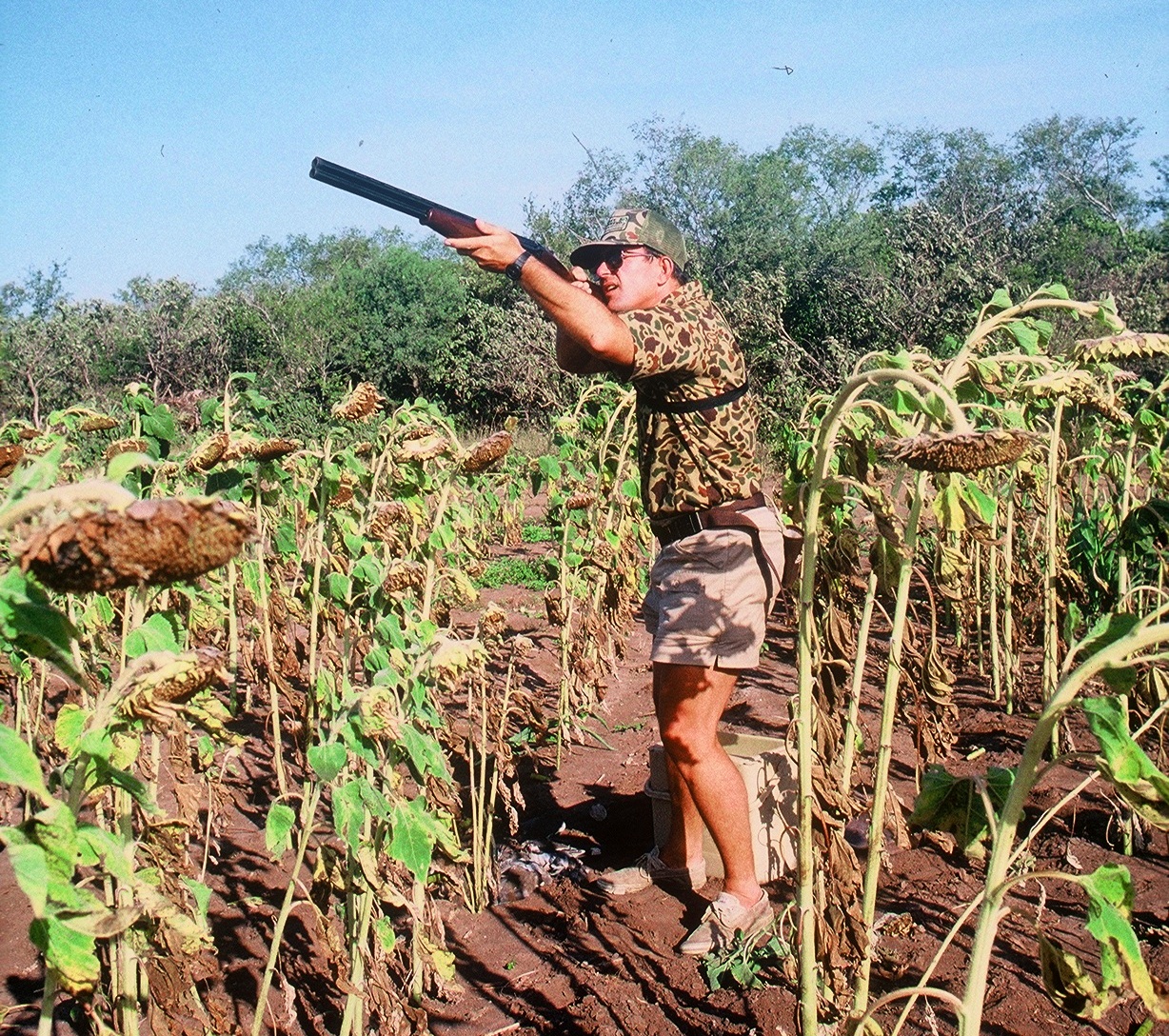 Wait until the dove is in shooting range, and keep swinging as you shoot. Photo by Gerald Almy

● Take care of your bounty. Dove hunting often takes place in hot weather, making spoilage of the game a concern. Don’t pile doves up in the back of a hunting vest. Instead, lay them out in a shady area spread out so their body heat can dissipate. Alternately, you can carry a cooler with ice and put them in that.

● Retrieve downed birds quickly. When doves are flying fast and furious, it’s tempting to try to bag several before you go pick them up. That’s usually a mistake, unless the ground cover is extremely low and open. Doves are well camouflaged and easy to lose. You need to mark exactly where the quarry fell and walk directly towards it after shooting. It only takes a few minutes to retrieve a bird, and doves are too tasty to waste. Of course, if you have a well-trained retriever he’ll solve this problem for you!

● Keep your options open. Instead of figuring you’ll hunt one spot, try to have two or three possible hunting locations lined up in advance. That way if one field has other hunters on it, or the birds just aren’t flying well there, you can quickly have an alternative site to turn to.

● Take cover. You don’t need to build a blind, but try to locate a bit of natural cover to sit or stand next to. Find a cedar, fence post, brushy point or uncut row of corn or sorghum to hunker next to. You don’t have to hide yourself as well as you would to lure in a flock of wary ducks, but standing out in the open is a sure way to make doves flare out of range.

Keep these pointers in mind and you should have the makings for a delicious dinner at the end of the day, as well as plenty of exciting memories of the elusive “gray ghost” to tide you over until your next hunt.