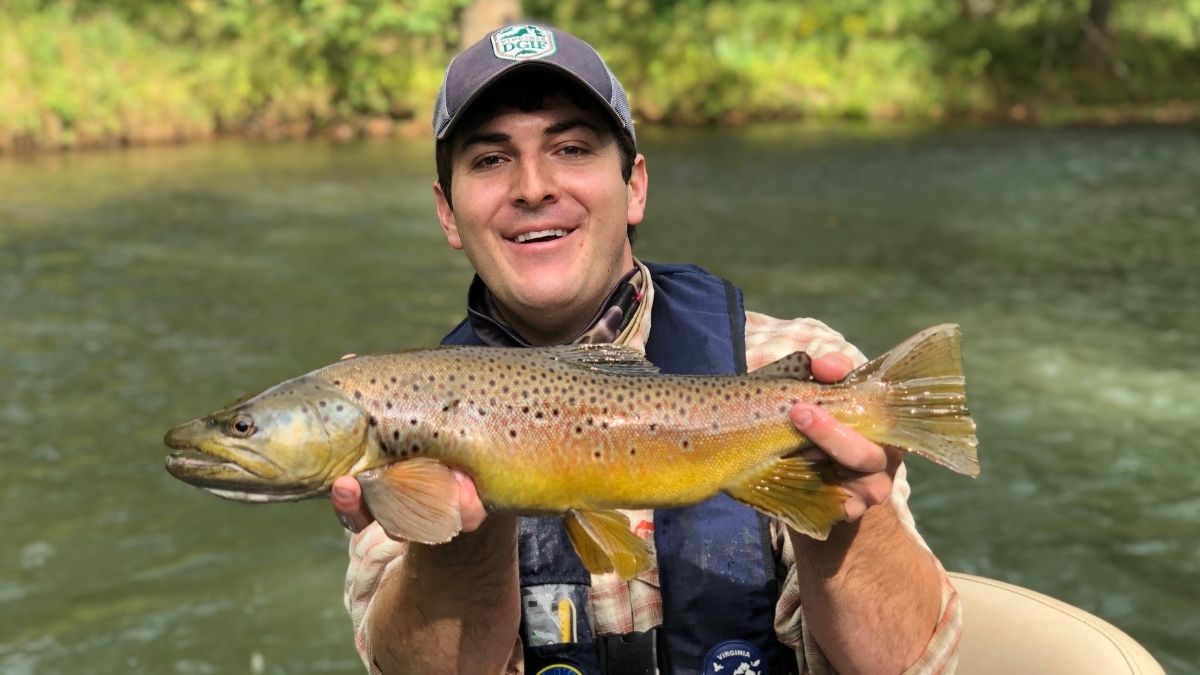 The author with a Virginia brown trout starting to show spawning colors. Streamer fishing from a raft or drift boat is a great way to cover water on the Smith and Jackson River tailwaters.

Fall is without a doubt my favorite season in Virginia. Cooler temperatures at night combined with warm afternoons make for especially pleasant days on the water. The trout and the trees seem synchronized, both turning shades of yellow, orange, and red at about the same time. And if you like streamer fishing for brown trout, there is no better time of the year.

For me, the pre-spawn streamer fishing is the name of the game when it comes to fly fishing for brown trout in the fall. Sure, we all have our preferred methods of catching trout, and it’s hard to beat casting dry flies to rising trout during a dense mayfly hatch. Seeing a fish sipping mayflies and then gently and delicately presenting your pattern to the fish is in a way poetic.

However, I would argue that seeing a big aggressive pre-spawn brown trout chase down a six-inch articulated streamer to savagely inhale the fly in front of you will take your adrenaline rush to a new level. It’s triggering this predatory instinct in a big brown trout that’s so addicting to us streamer advocates. These big browns are the apex predator on our trout rivers, and streamer fishing gives us a chance to witness this predatory behavior in action. All it takes is one good day and you’ll soon see the addiction to aggressive heavy leaders and big flies verse the long light delicate approach that often is the name of the dry fly game. 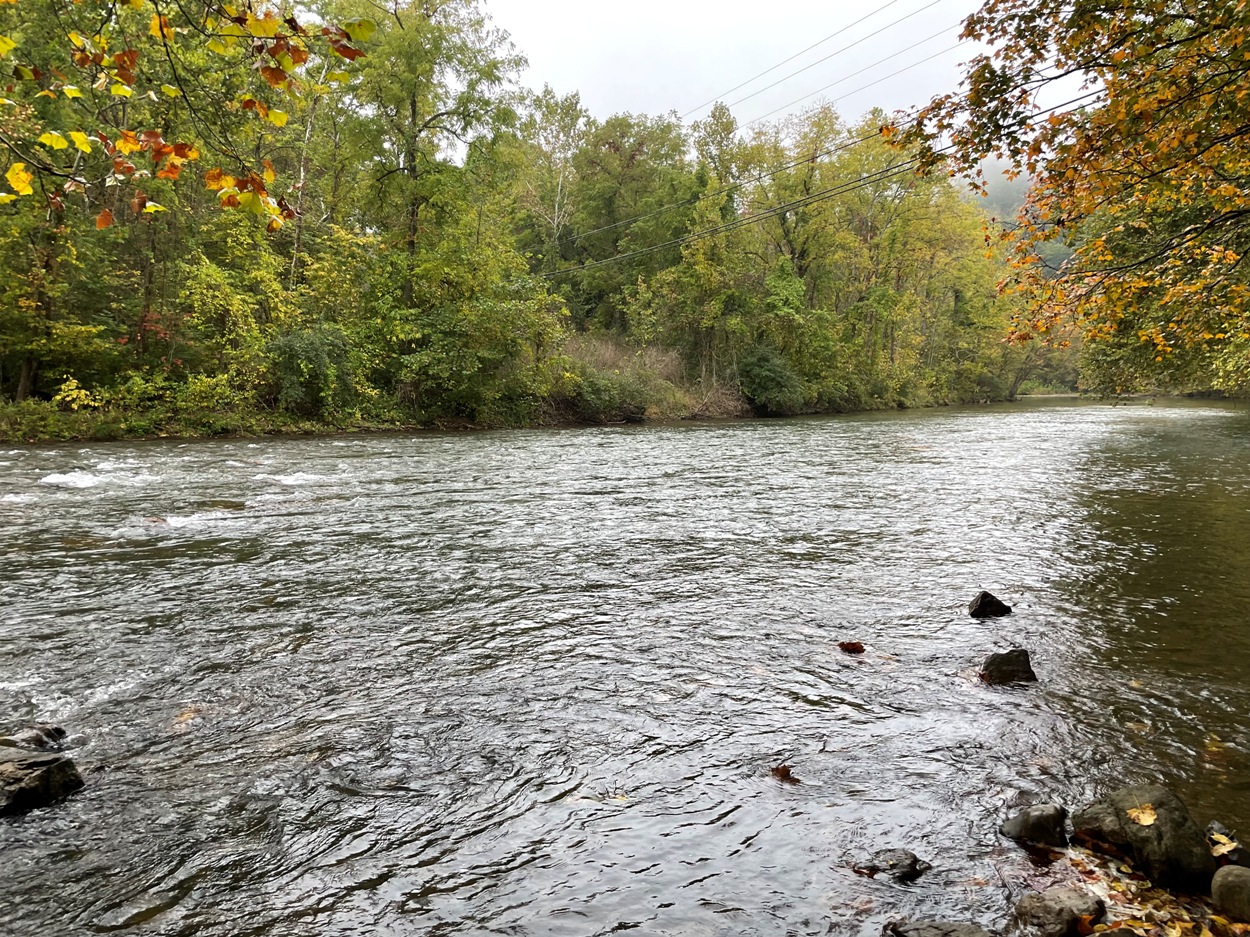 However, it’s the pre-spawn window before the trout actively spawn when streamer fishing can be at its finest. I’ve found that this window typically falls in the late September to mid-November zone in Virginia.

This is all done in an effort to impress the ladies and attract a female to spawn with. Large, reproductively mature male brown trout will sometimes develop a hook jaw, or kype, during spawning season that will stick with them the rest of their lives. Bottom line is brown trout, and particularly male browns, get very territorial and aggressive during this time of the year. The fish compete among each other for the best spawning habitat and the best mate as females prepare to dig their redds. Some days during pre-spawn it almost feels like the fish are angry, chasing anything that swims into their zone.

It’s also important to keep in mind that brown trout are piscivorous, meaning they primarily feed upon other fish. Sure, they will eat aquatic and terrestrial insects, even as adults, but studies have shown that they become more piscivorous at a younger age and smaller size than rainbow trout. The brown trout’s diet, matched with their aggressive pre-spawn behavior, is the perfect combination for the fly angler that is a streamer advocate. Aggressively fishing big streamers can be incredibly effective during this time of the year.

The size rod and reel you want to be fishing with depends on the size of the stream or river you are fishing. For fall streamer fishing on our larger rivers, we are typically fishing with 9- to 10-foot fly rods in the 6 to 7 weight range. My favorite streamer rod is a stout 9-foot,  9-inch, 6-weight that has enough backbone to throw big flies on a sinking line, but enough tip sensitivity to give when fighting fish.

If you are fishing a small to medium-size stream where a big fish is 12 to 13 inches, you may consider fishing with a 7.5- to 9-foot, 4- to 5-weight fly rod. Floating lines, sink tips, and sinking lines are all applicable based on the size of the waterbody and depth of water you are fishing. For fishing deep holes in higher flows on larger tailwaters like the Jackson or the Smith, I may consider fishing a 250-grain full sinking line to get down to the fish in heavy current. On smaller rivers and streams where the deep holes are only 4 or 5 feet deep, I will most likely be fine with a floating line or maybe a sink tip.

For leaders it’s important to stay heavy. The fish are not going to be inspecting your fly like they would in a flat slow pool during a hatch. Streamer fishing is often fast and furious—the fish have just a second or two to decide if they want to commit to the fly or not.

I typically fish with 0x to 2x when stripping streamers. I’ll fish a 9-foot leader when I’m fishing with a floating line to allow the fly to sink to deeper depths in the better holes. If I am fishing with a sink tip or sinking line, I will fish a significantly shorter leader in the 3- to 5-foot range so my fly stays down towards the bottom where the sinking line will take it.

Heavier leaders not only help to turn over the bigger streamers I throw in the fall but are also smart when targeting larger fish.  When that big brown inhales your fly you will be happy you have him on 0x as opposed to 3x or 4x. 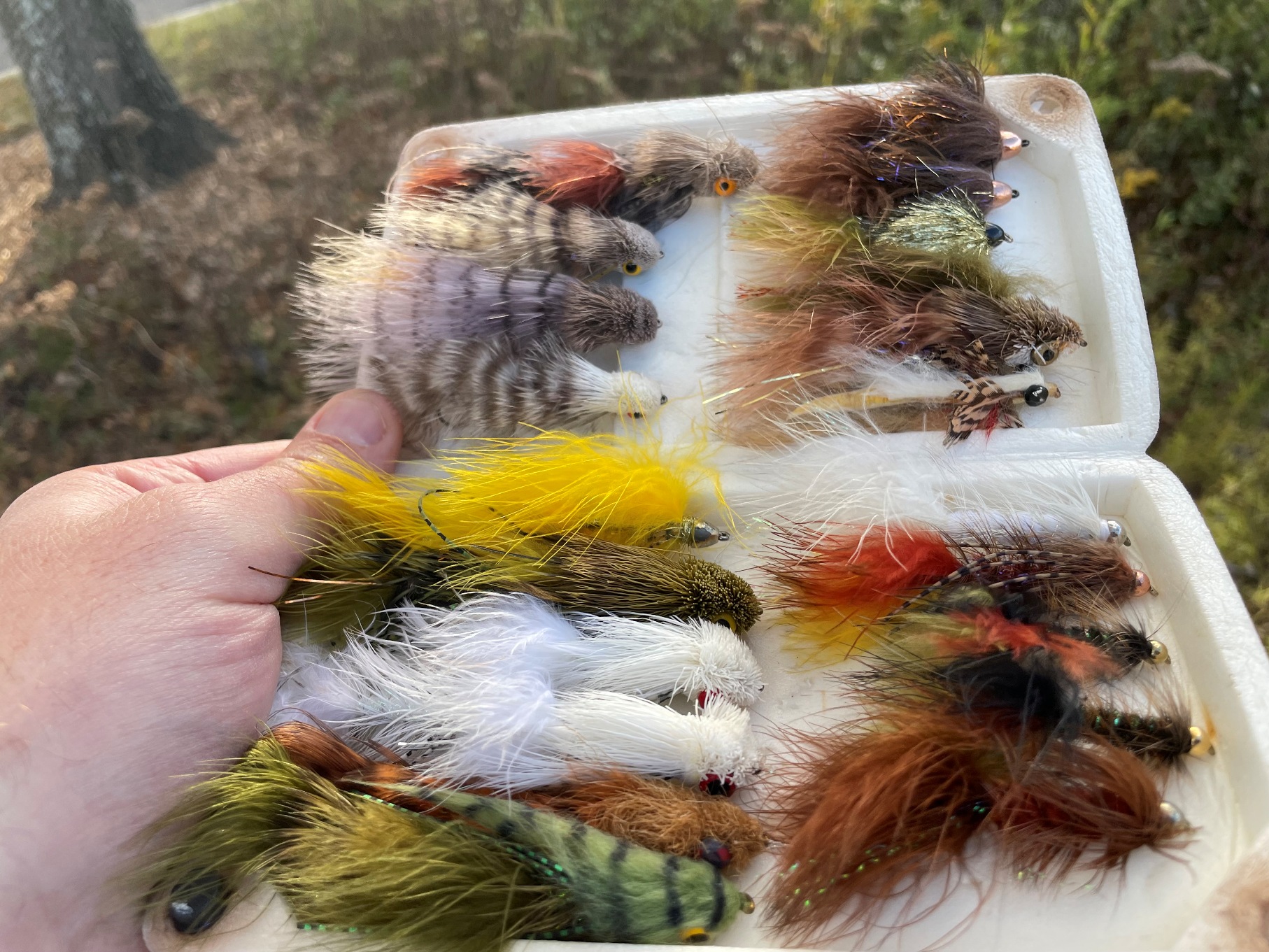 Having a variety of articulated and non-articulated streamers in different sizes and colors is critical. Being able to switch flies until you find a size or color the fish want is key to effective streamer fishing.

I often let the river conditions and the fish, more importantly, help me decide which fly will produce on any given day. As a good general rule of thumb, if the water is off-color and stained from recent rains, a darker fly will stand out better. In these conditions, I like throwing streamers in black, dark brown, and olive.

If I am fishing clear water I will often do the opposite and try streamers in tan, white, vanilla, and yellow. You can certainly catch fish on bright days with dark streamers and on dark days with light colored streamers, but this generally is a good tip to follow.

I fish both articulated and non-articulated streamers when fishing for brown trout in the fall. You can’t go wrong with a large beadhead or conehead woolly bugger in sizes 2 through 6 depending on the size of fish you are chasing and the size of the water you are fishing. Woolly buggers come in a variety of different styles and color combos to get creative with.

I will scale up my fly size when searching for bigger trout as often it can be beneficial to present a meaty presentation to a big fish.

Rabbit-strip patterns like zonkers and zuddler minnows are also classics. One of my favorite non-articulated fall streamers is the Beldar rubber leg. This conehead woolly bugger style streamer is bulky and pushes lots of water. The colored saddle hackle is palmered between rubber legs, adding extra material to push through the water. The fly comes in a variety of different sizes and colors, and it’s no doubt a big fish pattern.

Articulated streamers have become more and more popular over the past couple decades in the fly fishing arena. Articulated streamers are also a good technique to weed out the smaller fish. Let’s face it, when you’re fishing a 5- to 6-inch-long pattern, you really aren’t going for numbers of fish anymore anyway.  It’s a go big or go home mentality, and if you want a big fish you have to be persistent with your approach and sometimes downright stubborn.

Putting It All Together

I try to cover lots of water and search the best looking spots with a big fly that will be a real meal for a fish. Look for areas where a big fish can exert as little energy as possible to get as much food as possible. Soft water behind exposed boulders where a big fish doesn’t have to fight heavy current yet has a constant buffet line of food coming by in the current seams are great places to prospect.

Drop-offs and shelves can be great holding areas in both riffles and pools. Steep banks with log jams and woody debris can be great big fish holding areas. When fishing big articulated streamers, keep in mind that a successful day on the water might only be a couple or a few fish, but they might be better-sized fish with one that’s particularly memorable. 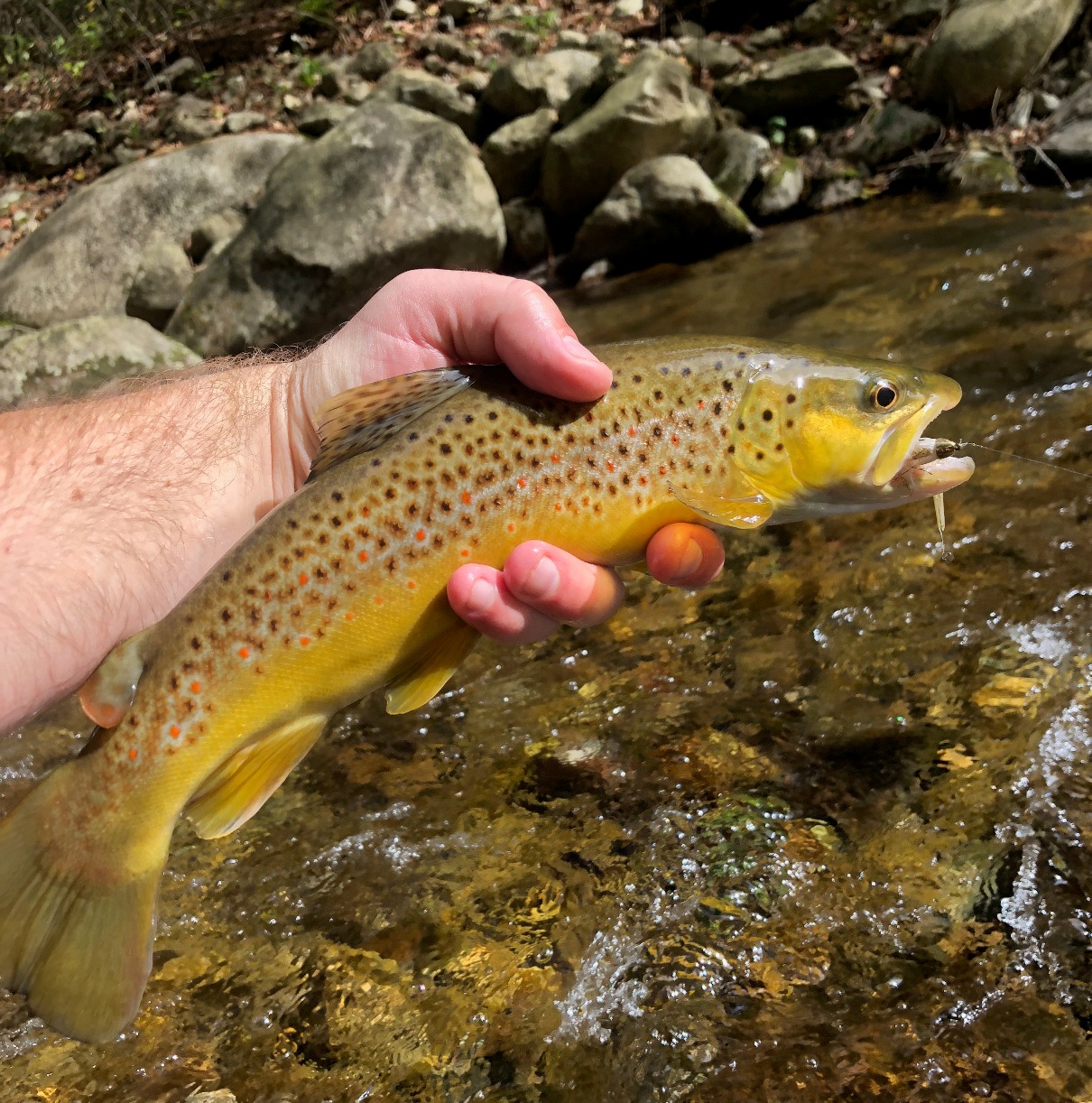 A streamer fooled this 14-inch brown trout in the middle of October on a higher elevation Virginia river. Size is relative and on smaller water fish like this are considered trophies.

There may be some days that you get blanked but being persistent and putting in time on the water is the only way to get rewarded with a trophy specimen.

Articulated streamers will sometimes provide more action than non-articulated streamers as they have two hooks that are jointed together, making the fly swim in a lifelike manner. I usually tie on a big articulated streamer when I am on the hunt for a big brown and willing to put in the effort of going for one or maybe two fish for the day. Some of my favorite patterns include Charlie Craven’s Double Gonga and Kelly Galloup’s Peanut Envy. Both of these western fly tyers have developed proven big fish patterns that produce all across the country. Many of these articulated minnow imitations are tied with deer hair and marabou or wool and marabou.

As far as presentation is concerned, I often quarter my casts upstream and strip the fly back at a diagonal angle downstream. Casting perpendicular to the bank and stripping the fly across the current can also produce strikes. In bigger water, you can work downriver casting and swinging streamers as well.

During pre-spawn, you can usually get away with a relatively aggressive and fast strip. However, let the fish tell you how fast to strip the fly. If you aren’t having much action, consider slowing down your presentation or pausing longer between strips. As water temperatures cool it can be beneficial to slow your strips down and bottom bounce your flies lower in the water column. That technique usually works all winter, for that matter.

As far as opportunities go to target brown trout in Virginia, we are blessed with an abundance of trout water and anglers can take their pick of fishing for either wild, stream-bred fish or stocked fish. 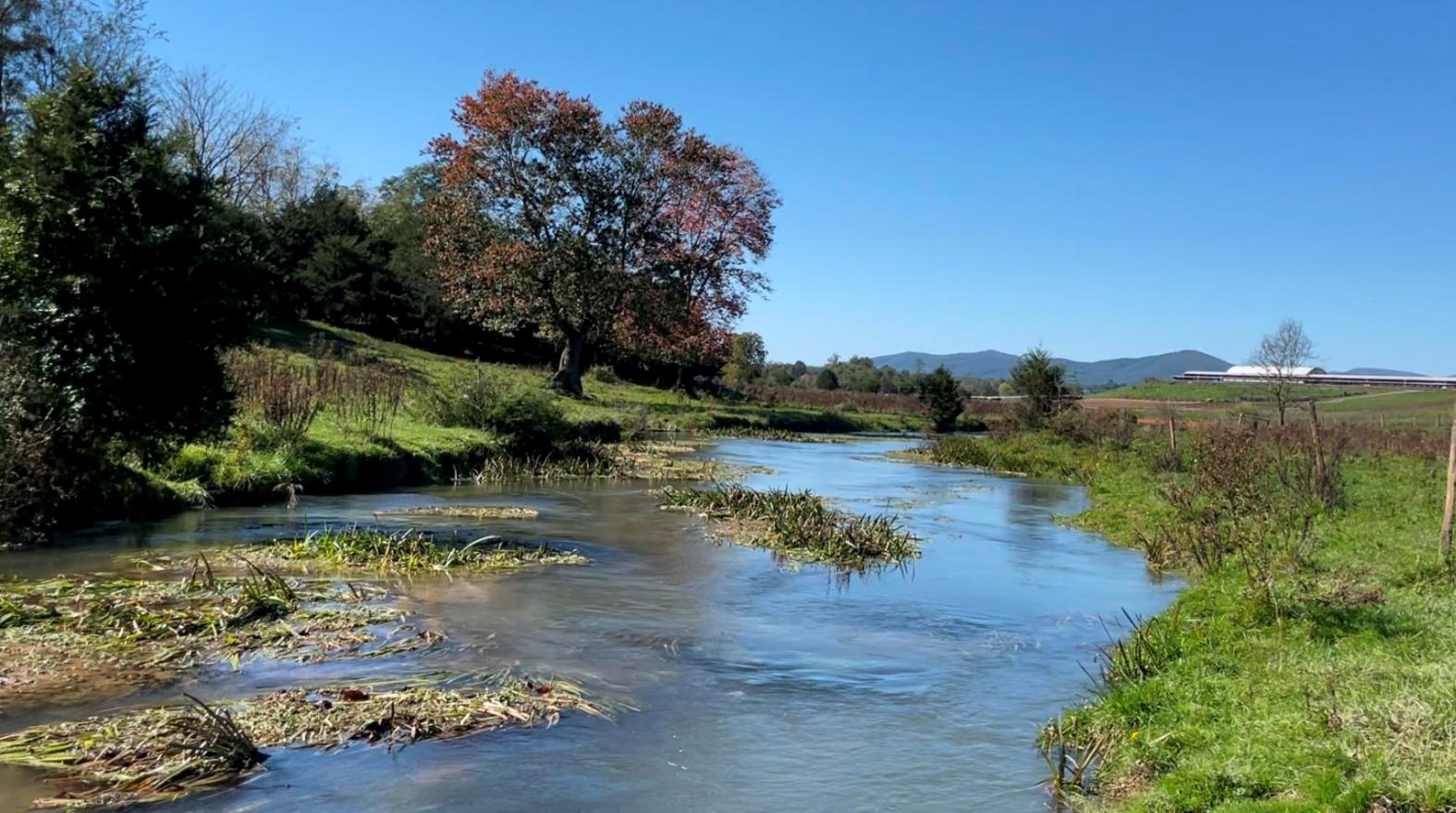 Mossy Creek in the Shenandoah Valley is one of Virginia’s best brown trout waters.

A few of the more popular waters to target brown trout in the fall include Mossy Creek, a limestone spring creek in the Shenandoah Valley known for its big wary brown trout, and the South River in Waynesboro, a freestone river with limestone influence that has some respectable sized holdover browns.

The Jackson and the Smith rivers tailwaters provide opportunities for anglers to float or wade fish for trophy-sized wild, stream-bred brown trout. The South Fork Holston River in the southwestern portion of the state is known for its large, trophy-sized brown trout and is a favorite in the area.

These are just a few of the many opportunities across the state to get started chasing fall brown trout. So grab some heavy leaders and a few of your favorite streamers and spend some time outside during one of the most beautiful times of the year.