Unmistakeable! A Painted Bunting in Virginia 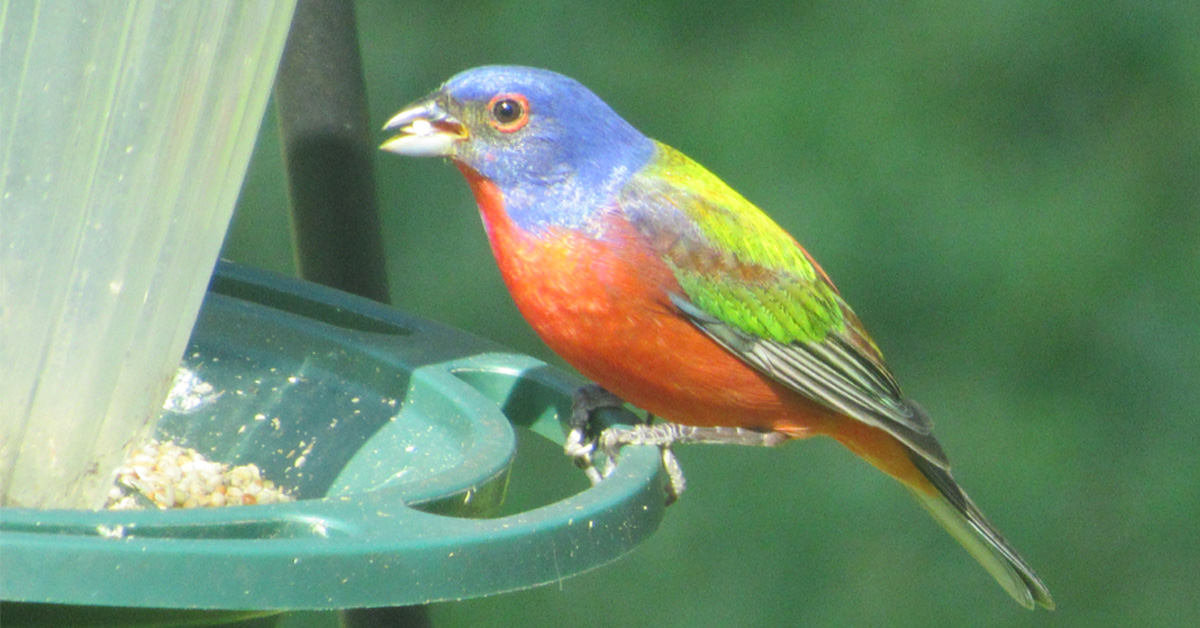 The painted bunting at the author's feeder.

“Come see, come see, it’s got a blue head! Quick!” my wife frantically called from the hallway. Linda, usually subdued—and often prone to understatement—was hyped and stammering. What has she seen? I quickly headed down the hallway. Still stammering, I heard Linda say, “Camera!” as I joined her at the master bath window, overlooking a couple of our bird feeders.

Woah! There on the feeder was an unmistakable painted bunting. No wonder Linda was stammering with such excitement. The bird did have blue head, but oh, so much more. Ridiculously colored and dressed for a party, a Mardi Gras party! Alive with color!

The painted bunting is a very rare winter visitor to central and western Virginia. Although occurring much more frequently in Virginia’s Tidewater or Coastal Plain regions—principally as a winter visitor—this flamboyantly colored bird is still considered rare, creating a lot of excitement anytime it visits a bird feeder.

The male painted bunting is so gaudily colored that it challenges description. Almost identical in size to its cousin, the indigo bunting, the bird is about 5 ½” inches long from beak to tip of tail. The multicolored bird has a blue-violet head, a lime-green back that transitions to a bright, but darker green on its upper wings, with a bright red throat, belly and rump. The darker tail and primary wing feathers are tinged with red and green. A bright red eye ring stands out against the head’s blue background. The adult female’s coloration is drab in comparison, yet could be described as a lovely pale green.

Many consider the painted bunting to be the most vividly colored North American songbird. Surely, the little finch-like bird’s outlandish dress would seem more appropriate for New Guinea—alongside the bird of paradise—rather than in Virginia. Interestingly, the painted bunting is in the same family, Cardinalidae, as a number of conspicuously colored birds such as our bright red, northern cardinal, the blue grosbeak, and the scarlet tanager.

Although recorded visits are rare across most of Virginia, the reality is that painted buntings could be seen here almost any month of the year. A review of the Cornell Lab of Ornithology’s eBird site shows that Virginia’s painted bunting sightings include submitted reports for every month of the year except August. The preponderance of sightings occur during the winter months, December through March. These winter sightings center in the Coastal Plain areas of Virginia Beach, Chesapeake, Portsmouth, and Norfolk. Most of the Northern Virginia, Alexandria, and Fairfax sightings have also happened in the winter—as did the northern valley sightings near Staunton and Harrisonburg, including Augusta and Rockingham counties. There are only two painted bunting sightings in the southwestern mountain area, in the city of Salem in the 1970s. These reports likely involved the same bird. During data collection for the Second Virginia Breeding Bird Atlas, there was a breeding-season sighting of a painted bunting on the Eastern Shore.

Ironically, the week before, Linda and I had talked about the low odds of seeing a painted bunting. A bird had been reported a few days before in eastern Virginia, and we noted that although it would be exciting to have one show up, the odds of that happening were almost non-existent. But a week later, it happened! Off and on that day, “our” painted bunting kept re-appearing at the feeder, feasting on millet. The next morning, he was gone, but a friend reported seeing a painting bunting at his feeder that morning, four miles due east of Appomattox. I am convinced that a painting bunting could show up almost anywhere in Virginia. Keep some millet in your feeder, and keep your camera handy. You will not need your bird book for identification. The painted bunting is unmistakable!