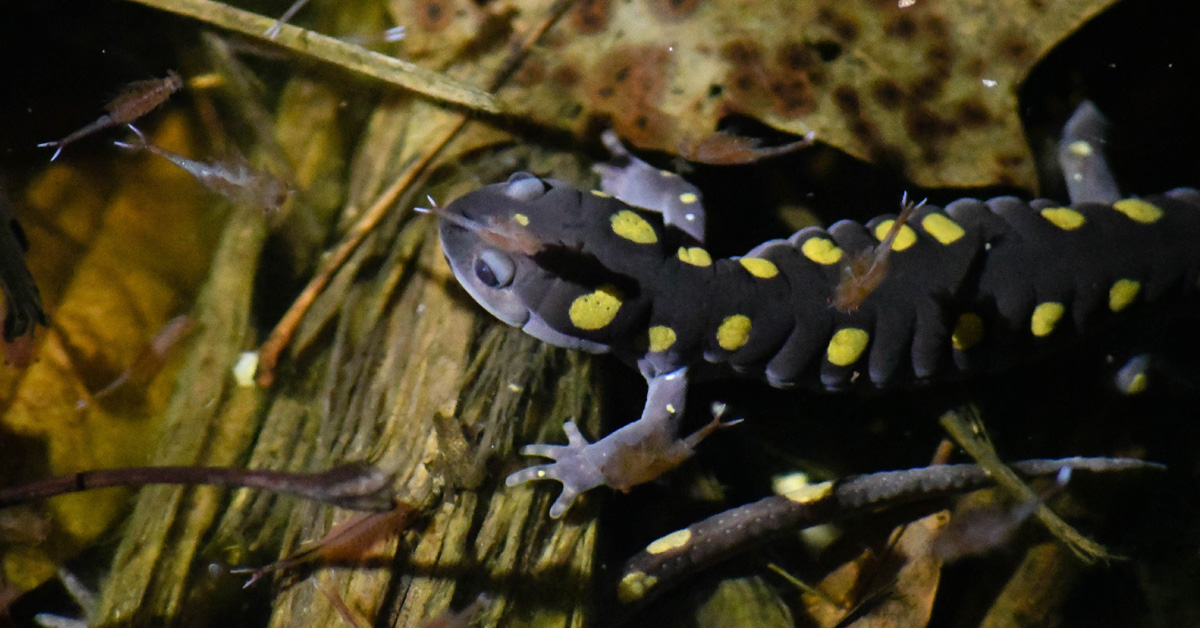 An adult spotted salamander looks for a mate in a southwest Virginia vernal pool amongst scores of fairy shrimp.

A few hours earlier, the small parking lot adjacent to the river would have been packed with vehicles from several surrounding states plastered with fly fishing stickers, but when we arrived, it was empty. The sun had been down for several hours, and had there been a moon, it would’ve been impossible to detect. A thick layer of clouds hung over the landscape, robbing it of even a shade of light, save for the converging headlights of a few traveling naturalists.

As the headlights parked and faded into darkness, Lisa Benish of the Blue Ridge Discovery Center (BRDC) pulled two spare headlamps from her truck and distributed them to those without. Despite our proximity to fantastic fishing, our cohort of associates of the Smyth County-based non-profit didn’t make the trek for trout, but to observe one of the first rites of spring occurring under the cover of darkness.

The air was abuzz, and in the least threatening way in several months. There was no howling wind, no dull crunching of frozen ground under boots, just the soothing sounds of spring—the rushing of a swollen river, a warm rain pattering damp ground, puddling the crosshatched blacktop, and ricocheting through the branches of a still-dormant hardwood forest. It was late February, but after a week of warming, the night had no teeth.

Not far off, opposite the access road from the river, the dull roar of a familiar sound penetrated the white noise of moving water—spring peepers (Pseudacris crucifer), one of the first and most audial harbingers of spring, and a confirmation that we were in the right place and at the right time. Cameras carried expectantly, headlamps searching in a scattered, slow march, we made our way towards the chorus of frogs.

In late winter, peepers congregate near water to mingle and breed. Their presence betrayed the location of a vernal pool located just off the road, which, during much of the year, might appear to be little more than a puddle to motorists passing by. These seasonal wetlands are often small, holding water only during the wet months and sometimes drying up completely during the summer and fall. However, during the spring, they play host to the breeding rituals and life history events of several interesting creatures.

One such creature was the reason for our slow, careful searching as we approached the vernal pool. When the first warm rain falls in late winter, they make their way from subterranean burrows on the fringes of hardwood forests to vernal pools to breed. We needed to tread carefully to avoid stepping on one.

Still several feet from the edge of the pool, a headlight beam caught an individual en route, dark eyes glistening—a positive sign. A quick glance at the pool revealed more. Silent, but striking, hundreds of spotted salamanders (Ambystoma maculatum) wriggled around woody debris, flooded grass, and each other in the night. They’re large salamanders, reaching lengths of six to 10 inches, with milky black backs studded with brilliant, yellow spots, and bellies tapering to gray by way of purple, making them easy to spot. All were gathered to partake in one of the most important nights of their year.

After they’ve courted mates, bred, and laid eggs in the pool, the adults migrate back to their terrestrial homes, leaving the larvae to hatch and mature. As larvae, spotted salamanders have external gills for breathing in their aquatic homes, but develop lungs and strong legs as juveniles, and take to land. If their birthplace dries up before this development, a whole generation may be lost.

The focused beam of my headlamp, after several minutes of watching globs of salamanders, began to attract yet another fascinating, vernal pool-dwelling creature—small crustaceans, called fairy shrimp (Branchinecta lynchi). At just a centimeter or two in length, fairy shrimp are delicate beings, but their anatomy is otherworldly. Eleven pairs of legs extend from their long bodies, which they use to breathe and swim upside down with a backstroke. They’re filter feeders that feed on bacteria, zooplankton, and detritus and are endemic to vernal pools, meaning they don’t live anywhere else. 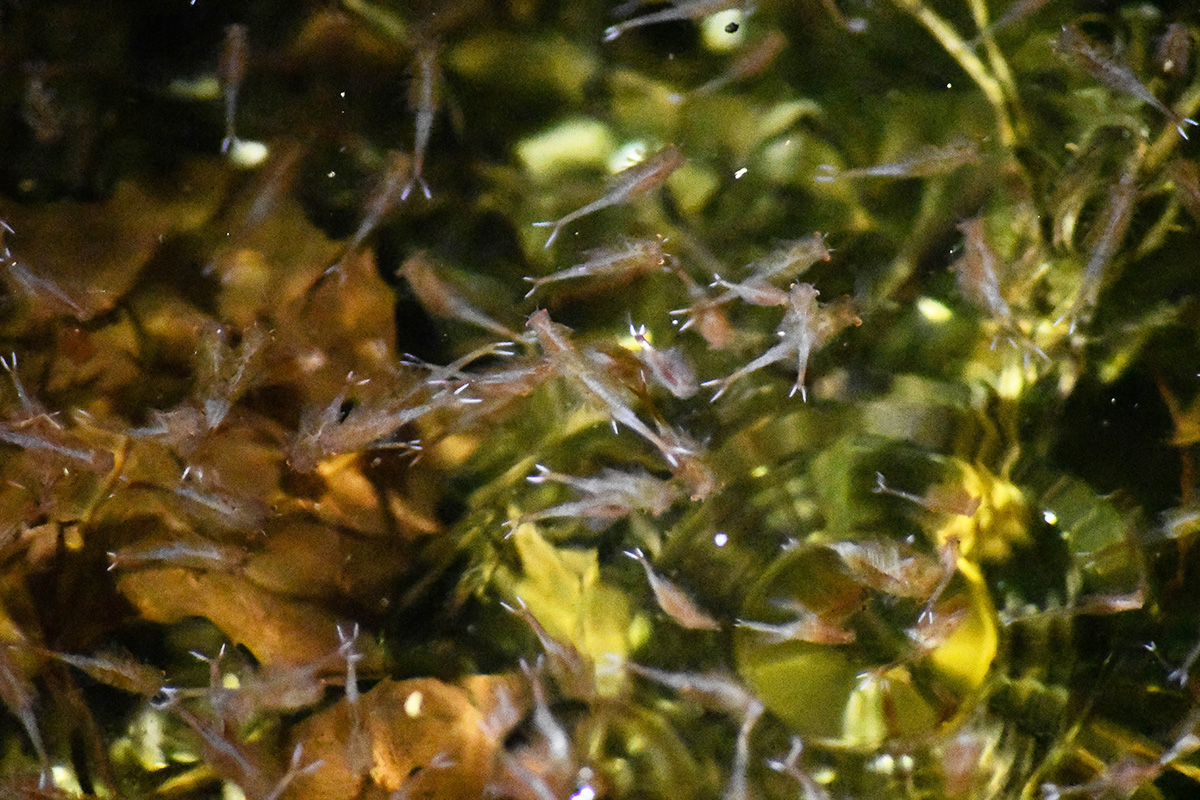 A pod of fairy shrimp preparing to mate at the conclusion of a staggeringly short life cycle.

When the warm, late-winter rains filled this vernal pool, the cysts, or latent eggs, of the fairy shrimp hatched. The life stage progression of these young fairy shrimp is astoundingly rapid. Hatching, several molts, breeding, and egg laying can all happen in just a few weeks, allowing the adults to mate before their short lives come to an end in the summer when the vernal pool dries up. The cysts produced by the female will then be embedded in the mud, patiently awaiting another life cycle sprint the following year. Watching such a foreign creature swim about such a small pool, it’s hard to imagine how they manage to perpetuate, but nature—and life—finds a way.

The jewels of the vernal pool are hard to look away from. But my senses eventually zoomed out and became overloaded with the cacophony of frog singing, once more. Despite their volume and obvious strength of population, their small size and propensity for camouflage means that spring peepers are often overlooked. At just about an inch in length, they are small tree frogs, drab in color—tan, brown, with a darker X pattern on their backs. For minutes I scanned crumples of dead grass and standing cattail stalks, shadows from my headlamp likely hiding several frogs from view. Eventually, a dark pupil betrayed a lone individual, frozen and muted by my light. 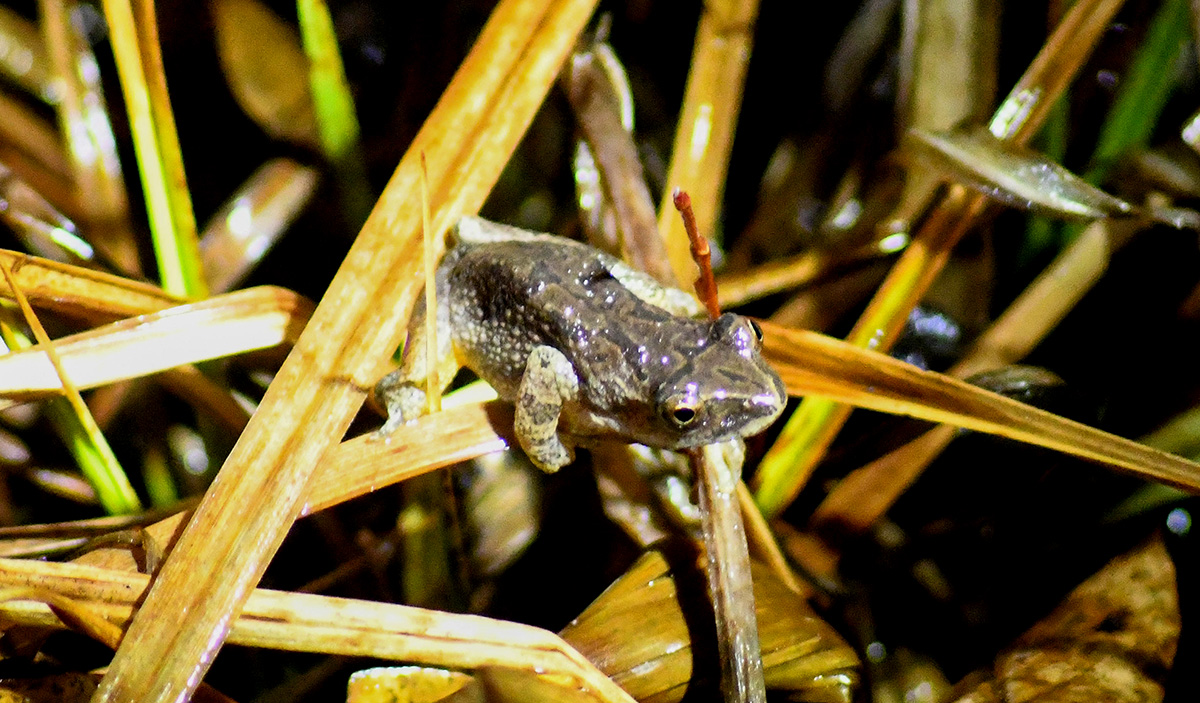 Small compared to their vocal presence, spring peepers are drab in color and rarely seen.

The peepers’ choral accompaniment is (visually) more obvious, largely due to their size. The wood frogs (Lithobates sylvaticus) are much larger—two to three times the size of a peeper. Their presence was given away by a slightly deeper, quacking croak, and confirmed easily with a quick visual scan. They also were using the vernal pool to breed, as evidenced by the pairs of frogs stacked on top of one another across the pool, some actively producing clusters of eggs. 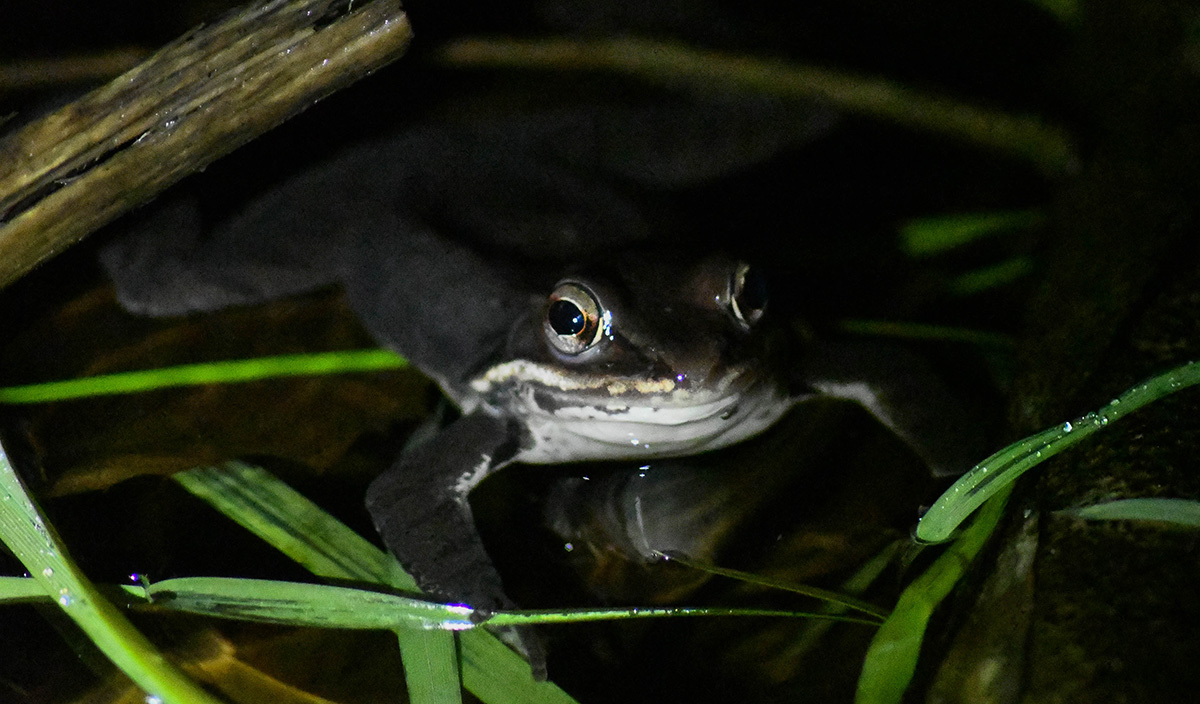 A lone wood frog hiding from the spotlight of searching naturalists.

It occurred to me in listening that the inspiration and heart in the song of these frogs, in addition to the drive to mate, may be in celebration of the arrival of warmer weather, as the name of the spring peeper implies. Unlike their community members that weather winter in the ground or as unhatched eggs, wood frogs and peepers alike have a unique adaptation—an antifreeze-like compound in their blood that allows the space between their cells to freeze while their cells remain functional. They may spend months in this frozen state, only to thaw and reanimate come spring.

All at once, the bulk of our clan of wandering headlamps converged on the hand of Aaron Floyd, BRDC’s Executive Director. Certainly a minority amongst the vernal pool goings-on, a marbled salamander (Ambystoma opacum) had emerged in the dark. Rarely seen, marbled salamanders are widespread in the Southeast, but are largely nocturnal and spend most of their time underground. They, unlike most mole salamanders, breed in vernal pools in the fall, and are much more likely to be spotted then. 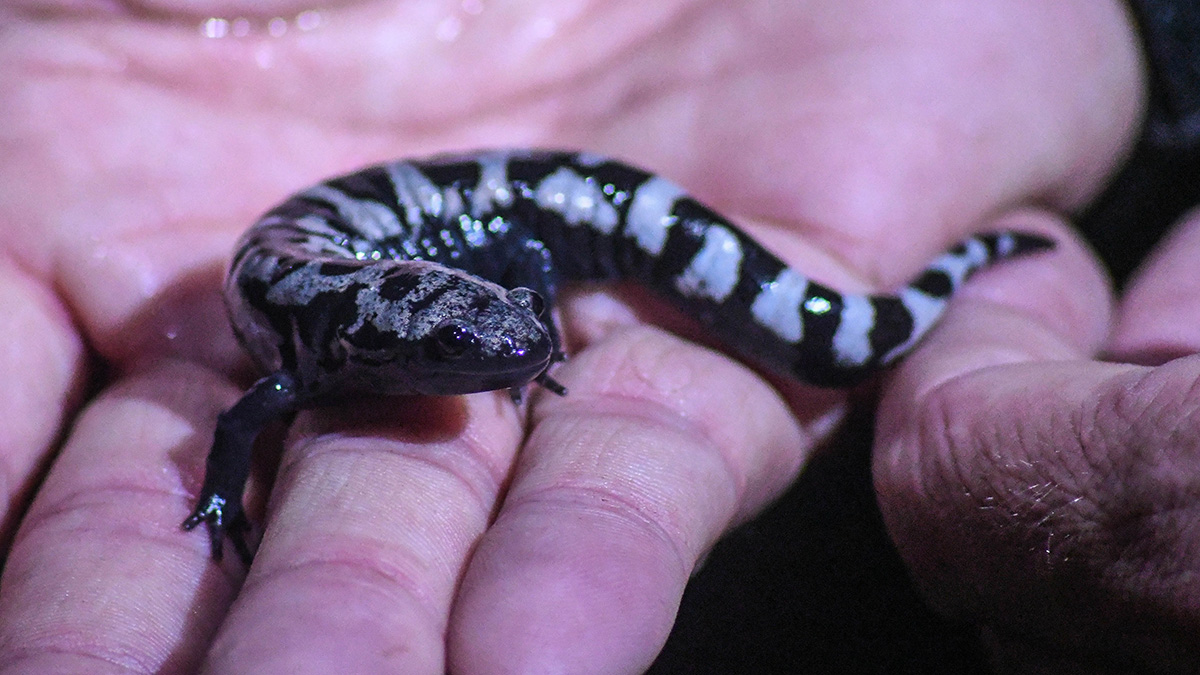 Marbled salamanders, though not spring breeders, do use vernal pools for reproduction and are largely nocturnal.

For the first time in over an hour, a car drove by. The chorus of frogs went silent as headlights danced over the surface of the vernal pool, flooded it with light, and then vanished—the motorist likely without a clue as to the scale of wonder and natural beauty transpiring just feet from the asphalt.