A Woodcock Egg in the Woods 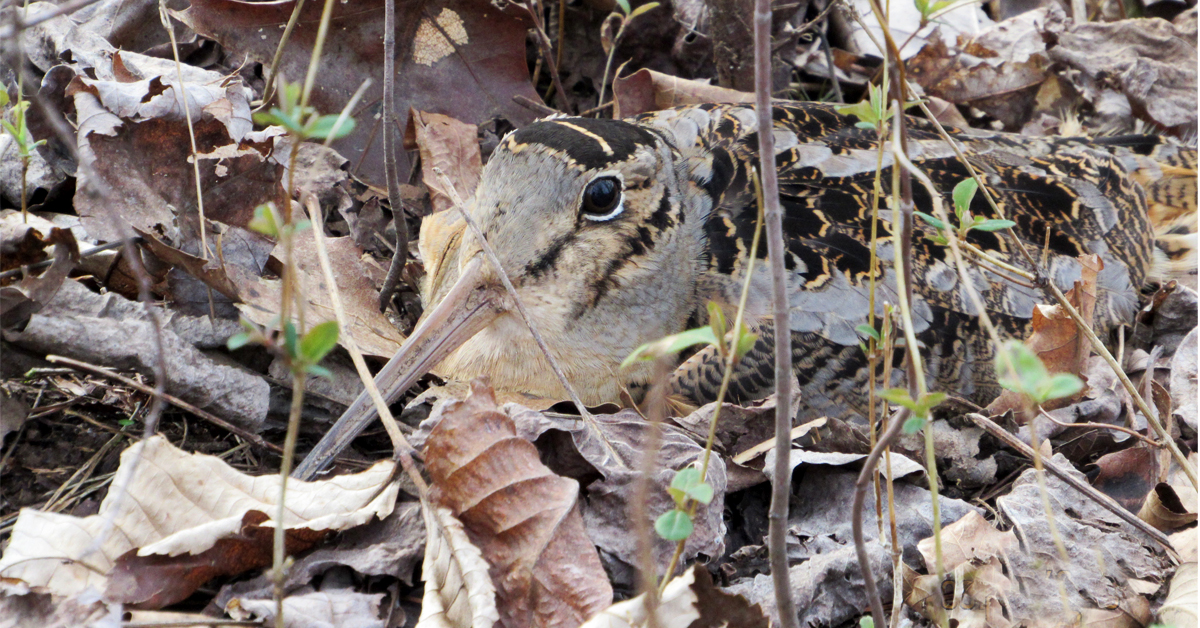 The woodcock on her nest.

One day in late February 2019, I was driving west on I-64 with my young English setter Patches. We were traveling to West Virginia to grouse hunt the last couple days of the season. My daughter Jody called me in-transit. “Daddy, you are not going to believe this. Parker just found a quail egg over in the woods,” she said.

“Jody, I don’t think Parker has found a quail egg—it’s way too early for quail to be nesting and laying eggs. It’s probably a woodcock egg. That’s the only ground-nesting bird that I know that would be laying here in February. Yep, I’ll bet you that Parker has found a woodcock egg. Wow! That’s a little surprising in Bedford County, this early in the year. That Parker, he can find anything, can’t he?”

She told me that Parker wanted to keep the eggs and incubate them and raise the chicks, but I told her that wasn’t a good idea.

“Like all birds, Mother Woodcock has to turn her eggs every day, while she is sitting,” I told her. “And she knows just how much to turn them. Otherwise, the chicks will be deformed. Then you have the whole issue of feeding a woodcock chick—that’s all a little too much for us, but the birds are programmed to do it all, very naturally.”

I told her to have Parker take the egg back to the woods and place it as close as possible to the exact spot where he picked it up. A woodcock nest in nothing more than a slight depression in the leaves. The little hen woodcock may be just starting her nest and Parker may have found the very first egg that she has laid. Woodcock normally lay a clutch of four eggs, before they start sitting. If he could put the egg back very close to where he found it, the little hen would probably finish laying her full clutch right beside the first one.

What a neat find by Parker! Great timing, too. Here I was on a beautiful late winter day, heading out to bird hunt and I get notice that the youngest grandson has found a woodcock egg. More power to the woodcock!

Soon, Jody called back and told me that when Parker took the egg back into the woods, he found three more eggs in the spot. He returned the one egg and left the four eggs.

I told her, “Great job, Parker! So she has a full clutch of eggs—if she is not already sitting, she will be starting any time. Maybe something—even Parker unknowingly—flushed the woodcock off her nest, and in flushing, the bird accidentally rolled that one egg away from the others. I have seen wild turkeys do that—and it might explain why he found the one egg by itself. But do me a favor, Jody. Send Parker back over to the woods immediately and get a picture of the woodcock eggs before the bird returns.” 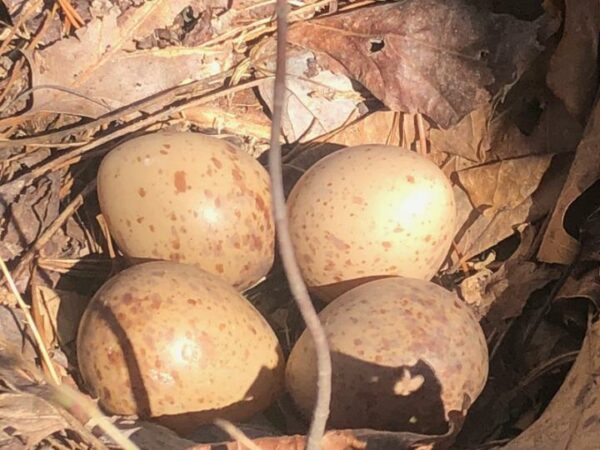 Those phone conversations with my daughter were the beginning of a grand little adventure of my 10-year old grandson Parker and a winter woodcock nest. The following day, Parker found the woodcock sitting on her nest, full-time. Was she already incubating, when he found the first egg? That seemed likely, but maybe not.

Woodcock may well be the most amorous and romantic of all birds. Much has been written about the male’s spring breeding display and “sky dance.” Yet I have seen very little acknowledgement about the woodcock’s courtship display on its southward migration—or even more pronounced—on the bird’s wintering grounds. Nonetheless, beginning in the late fall evenings at dusk, woodcock males will often spiral upward several hundred from the ground—twittering and chirping—then dropping downward to an open area on the ground, sometimes concluding with their classic nasal “peenting” call that so melts the females’ hearts.

Although the late fall and winter activity is not as vigorous as their spring breeding display, the little males are at least semi-serious about it all and it appears that they simply can’t help themselves. The first time I observed this flight activity in mid-December, I thought it was just a matter of untimely spring fever. But after seeing it over and over, I realized the male woodcock were reasonably serious with their twittering, chirping courtship display. The little males are apparently ready to mate anytime—they are just waiting for the females to decide that such activity is a respectable idea. Like so much in the outdoor world, the females dictate the timing and the outcome.

Woodcock nesting in Virginia is nothing new. In mid-May 1971, I found my first woodcock brood on the Appomattox-Buckingham State Forest. Since that time, I have regularly found woodcock nests in the Virginia Piedmont. Most of the foresters I worked with knew of my woodcock interests and would pass on their field observations. 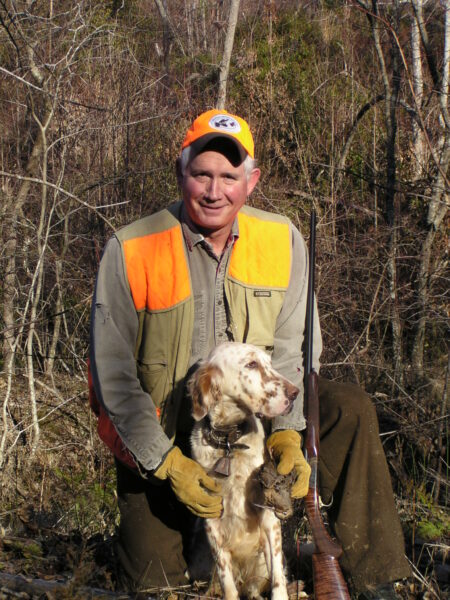 The author and English setter Gracie with a Christmas Day woodcock.

From my central Virginia files, I have over a dozen documented woodcock nests and broods—many occurring very early in February and March. Some of the more surprising instances include a full-clutch nest of four eggs, found on February 15 in the City of Lynchburg. Also on February 15, a brood of chicks was found on the ground in a Cumberland County bottomland: that means the hen would have started her nest in late January!

On March 14, one of my cohorts observed a woodcock hen followed by four chicks in the middle of Route 24 on a dry ridgetop near Vera in Appomattox County. Most surprising was a March 25 nest on a dry ridgetop in Amherst County. That nest was in a recent clear-cut and the hen had absolutely no overhead cover of any type. Except for her well-camouflaged body against a dead-leaf background, the bird was essentially nesting on bare ground. That is so out of character for a bird that loves thick, brushy, briar and vine-infested cover. No problem: the woodcock successfully hatched that brood with no cover at all. Nature is so fascinating!

While Virginia’s Coastal Plain is the more common location for wintering woodcock, a surprising number of birds winter every year in our southern Virginia Piedmont counties. The Piedmont birds are more transient in nature. For more than 10 years now, I have had wintering males here at my Appomattox County home, virtually in the backyard. When arctic air masses or heavy snows move in, the woodcock move out, apparently going either south or east. However in a week or so, when weather moderates a little, the wintering males will return.

Although woodcock hunters and biologists associate woodcock with wet bottomland areas, wintering birds are often found in higher, drier locations—cutover ridgetops and pine plantations included. Naturally—since the males are flying, displaying and singing in these areas—winter woodcock nests are also found in some surprising places. And so it was with Parker’s nest. It was on the north side of a dry ridge. The area had a timber harvest a few years earlier, leaving a scattered overstory of large yellow poplar trees, with briars, brush and young trees growing up underneath.

Parker began checking the nest daily to see if the eggs had hatched. We took close-up pictures of the woodcock, but were careful not to disturb her otherwise. How long would the woodcock sit on her eggs before they hatched? I sent a biologist friend a note, asking that question. He replied that the research literature indicated a woodcock incubation period of 19-22 days.

Later on in the spring, during the first week of June, I got a call from Jody. “Daddy, you are not going to believe this, but I know you’ll be excited about it—Parker came in from outside and says he just heard five different quail, all whistling ‘Bob-White.’ ”

“Well Jody, coming from Parker, I do believe it. As scarce as quail are, that is exciting!” I replied. “Wow, I hope all those whistling birds find mates. Who knows? Before long, maybe you’ll call me and say, ‘Daddy, Parker just found a real quail egg over in the woods.’ ”