Lowhead dams are deceptively dangerous. The public should exercise extreme caution when in the vicinity of such dams. Virginia has several lowhead dams on rivers throughout the state. Over the years, houseboats, fishing vessels, powerboats, sailboats, PWC, kayaks, and canoes have all fallen victim to lowhead dams

Lowhead dams may range from a 25-foot drop-off to a mere six-inch drop-off. Some dams are very wide and others not wide at all. Interestingly, the characteristics of moving water are the same regardless of the size of the dam. Part of the deception is that most people would associate danger with a dam having a significant drop off and fast-flowing water but fail to realize the danger is as great with a two- or three-foot dam face and a moderate flow of water. The dam design, depth, volume and velocity of water combine to determine the risk to boaters.

Danger lurks above and below the dam. Water flowing over a drop forms a hole or hydraulic at the base which can trap objects washing over the drop. Backwash or recirculating current is formed below the dam. Once swept over the dam, a victim becomes trapped and is forced underwater, pushed away from the dam, then circulated to the top. The circulating motion then repeats the cycle over and over again as the individual is drawn back against the base of the dam. 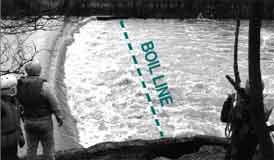 It is nearly impossible to escape the strength of the hydraulic when trapped. The best thing to do if in this situation is to tuck the chin down, draw the knees up to the chest with arms wrapped around them. Hopefully, conditions will be such that the current will push the victim along the bed of the river until swept beyond the boil line and released by the hydraulic.

If attempting a rescue of a trapped person, always wear a lifejacket. Throw a line from shore to the person in danger. Untrained rescuers should never approach the hydraulic in a boat. Call for help if possible.

Thanks to the Ohio DNR Division of Watercraft for provided content.

Get more information from Virginia Department of Conservation & Recreation.