A Decade of Fish Disease and Mortality Investigations

The summer of 2015 illustrated the remarkable ability of a smallmouth bass population to rebound following a fish mortality event. The rebound, although not fully, was contributed to successful year of spawning in 2010. The most recent mortality event occurred in the spring of 2014 when a few anglers and concerned citizens reported small numbers of dead and diseased smallmouth bass in the Shenandoah River. DWR verified that there were a relatively high percentage (30%) of smallmouth bass and redbreast sunfish with lesions and other abnormalities on the South Fork Shenandoah River from Port Republic to Front Royal. DWR also sampled throughout the North Fork Shenandoah River and observed fish with the same abnormalities, but the percentage was slightly lower.

Although the James River Watershed experienced similar mortality events in the past it seems things have been fairly quiet recently. Angler reports of dead or diseased fish on the Cowpasture, Jackson and upper James River have been almost non-existent over the last four years.

Impacts from the 2014 mortality/disease events in the Shenandoah River watershed were fairly heavy for that spring and summer. However, DWR sampled the fish community in the fall of 2014 and found an abundance of 9 to 11 inch smallmouth bass and a lot of very young bass as well. Based on the most recent 2015 fall sampling, the 9 to 11 inch group of smallmouth grew to 11 to 13 inches during the summer of 2015 and barring any disease outbreaks in 2016 the fish are expected to reach the 13 to 15 inch range by August of 2016. Additionally, a successful spawning year in 2012 will bring another group of 9 to 11 inch smallmouth bass for anglers to enjoy in 2016. Better days are ahead for bass anglers in the Shenandoah River basin.

It is common for a few fish in a population to exhibit some type of abnormality such as lesions, dark patches of skin, raised bumps, loss of scales, split/eroded fins or discolored/eroded gills (see photos at the bottom of this page). Historically in the Shenandoah River watershed when 20% or more of the fish in a population are exhibiting one or multiple abnormalities of this type it becomes more of a concern. Chronic spring-time fish mortality and disease events have occurred in the Shenandoah River over the last decade, and were present in the upper James River from 2007-2010. These episodes have not been uniform in location or severity. Adult smallmouth bass, redbreast sunfish and rock bass have been the primary fish affected. However, several additional species have also been inflicted. Affected fish typically exhibit open sores or “lesions” on the sides of their bodies and some dead and dying fish have no visibly external abnormalities.

Determining the cause of these mortality/disease events has proven to be extremely difficult. Scientists have and continue to conduct in-depth studies on fish health, pathogens, water quality, contaminant exposure and toxins released by bacteria (blue-green algae). Current studies are focusing on endocrine disrupters, bacterial toxins (blue-green algae), and water quality impacts. The fact that these events have occurred in multiple watersheds that differ in many ways has added to the complexity of understanding the primary cause.

Fish health investigations to date have included: histopathology (Figure 2), parasitology, bacteriology, virology, and blood and liver analysis (Figure 3). This information has been collected from the affected rivers, and also from a few “reference” rivers where these mortality/disease events have not been occurring. Fish health samples have been analyzed by several Universities, the United States Fish and Wildlife Service’s Northeast Fish Health Lab, and the United States Geological Society’s Eastern Fish Health Lab. While researchers have collected a plethora of fish health data, linking the disease and mortality episodes to a single cause has been elusive. Detailed research findings are described in the Virginia Tech University final report “Investigation Into Smallmouth Bass Mortality in Virginia’s Rivers” (Orth et al. 2009) (PDF). 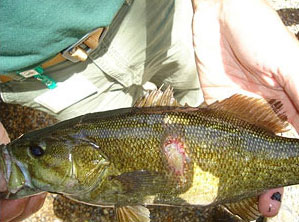 From the research and monitoring conducted to date, there has not been any conclusive evidence that water quality variables or chemical contaminants are directly responsible for these fish mortality/disease events (Figure 4). Contaminant levels were measured in the rivers affected as well as a few rivers where these fish mortality/disease events are not occurring. Contaminant levels were measured at both base-flow and during runoff events (Figure 5). However it must be noted that not every possible chemical compound was measured, and that the toxic concentration to fish of many chemical compounds are unknown. It is also not well understood how some chemical compounds could “interact” with one another and become toxic to fish. More research is needed in this area to determine if multiple stressors may be occurring at the same time to impact the health of these fish. Detailed findings from water quality and contaminant monitoring projects can be obtained from the Virginia Department of Environmental Quality’s Valley Region Office.

Some chemical compounds and heavy metals have been shown to suppress the immune system and influence development of certain aquatic organisms. These contaminants are referred to as “endocrine disruptors”. Natural and synthetic forms of the hormone estrogen also fit into this category. Estrogenic activity was measured in water samples taken throughout the Shenandoah River and its tributaries at levels that may cause biological effects in fish. Although they are most likely not health, there has been no definitive or conclusive evidence that these chemicals are negatively affecting the immune system of fish in the Shenandoah River and contributing to the mortality/disease events. Researchers with the United States Geological Survey are still actively engaged in understanding how certain contaminants may influence the immune system of fish. This research includes fish taken from Virginia rivers as well as other rivers in the Chesapeake Bay Watershed. DWR continues to work with these scientists by providing fish samples.

During the spring of 2015 DWR began collecting smallmouth bass livers throughout the South Fork Shenandoah River to test for microcystin presence. Microcystin exists in the aquatic environment when blue-green algae (cyanobacteria) are present. Blue-green algae toxins have been shown to be lethal to fish, humans, livestock and pets. Most blue-green algae thrive in aquatic systems with a high ratio of phosphorus to nitrogen and appropriate flow and temperature. Given favorable environmental factors blue-green algae may displace non-toxic algae. When water temperatures increase certain blue-green algae begin to die-off. This causes the cell wall of the algae to burst and release toxins into the water column. Again, this is probably not the root cause of the fish mortality events. However, coupled with other stressors it may be one of the major factors contributing to these events. In 2015 smallmouth bass liver microcystin levels were relatively low. There were also very few fish with lesions and little to no reports of fish mortality events. DWR plans to collect samples each spring until another fish mortality event occurs to determine if there is a spike of microcystin levels in smallmouth bass livers. 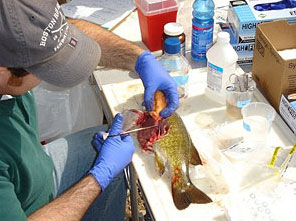 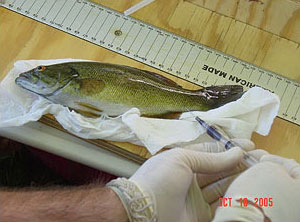 In the past DWR and USGS focused on a particular biological pathogen as a possible cause of the disease/mortality episodes. Smallmouth bass, redbreast sunfish and rock bass were collected before, during and after the April/May mortality period from different rivers and analyzed for the presence of pathogenic bacteria from 2008 to 2012. The pathogenic bacterium Aeromonas salmonicida was present and typically the most abundant on fish sampled during the fish kill period. This bacterium was not present on fish in the Maury River during the fish kill period and there have not been any fish kill issues or reports in the Maury River of this type. A. salmonicida was not present on fish before or after the fish kill period. Although this bacterium is present and has the ability to greatly impact fish health we are not aware of why it may be impacting the fish population. A. salmonicida is present in multiple aquatic systems around the world. The simple presence usually doesn’t cause such impacts on bass and sunfish populations. It most commonly causes disease in trout and salmon. Environmental factors such as temperature, flow and eutrophication may also play a role in its ability to flourish. The bacteria is considered a “cold-water” fish pathogen since it cannot survive water temperatures > 74° F. USGS researchers have identified that coldwater tributaries entering the river and large springs upwelling in the river are “reservoirs” of this bacteria where it can survive year-round. A. salmonicida is a very virulent bacterium that may influence populations with only its presence. However, if any additional environmental, behavioral or chemical stress is added to the population while A. salmonicida is present in the river then it would have a higher probability of having a detrimental impact on the population. Although it seems A. salmonicida may be a major contributor to the mortality/disease events we now ask, why has it only impacted the fishery during the last decade and what may be stressing the population to let A. salmonicida thrive?

While scientists conclude that they may never be able to determine where specifically this bacteria came from nor when it may have been introduced into these rivers, learning more about this pathogen could lead to understanding the root cause of the problem. Additional questions that researchers hope to answer concerning this bacterium include: 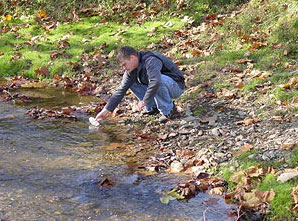 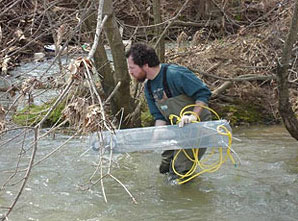 Figure 5. Placing a passive chemical sampler in the river.

Researchers also have looked to aquatic insects as a possible way to understand the cause of the problem in the Shenandoah River Watershed. The Entomology Department at Virginia Tech was contracted by DWR in 2006 to conduct a comprehensive evaluation of the aquatic macroinvertebrates in the Shenandoah River Watershed. Unfortunately, the study did not detect the cause of the fish mortality and disease problems. However, the main finding was that the Shenandoah River’s aquatic insect community is indicative of a agricultural based watershed, is more vibrant than the New River in Virginia and the Susquehanna River in Pennsylvania, and is more diverse and healthy than it was back in the 1960’s. (Shenandoah Macroinvertebrate Study Report (PDF)) 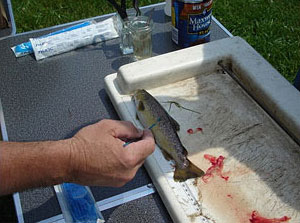 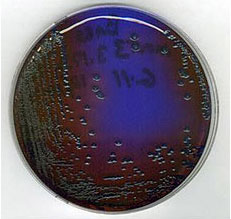 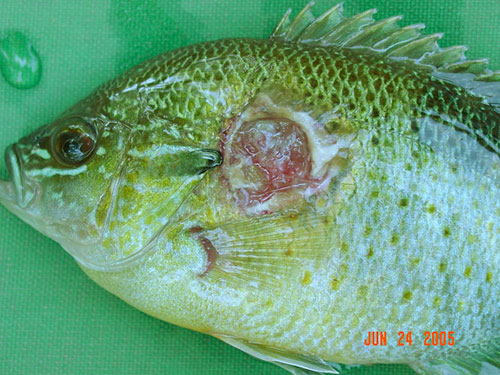 Bacterial lesion on a redbreast sunfish. 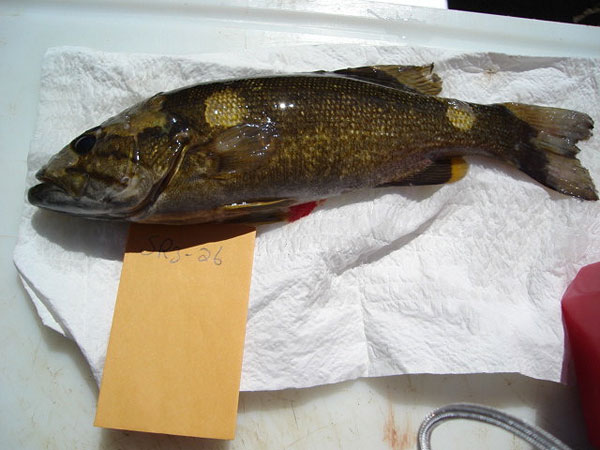 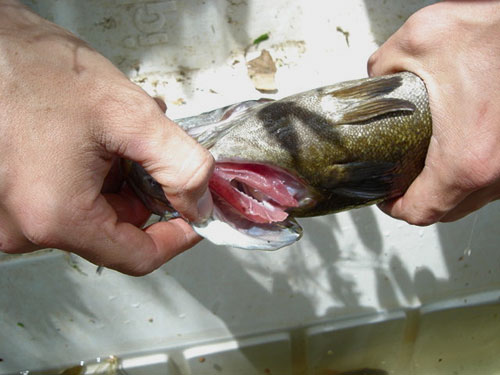 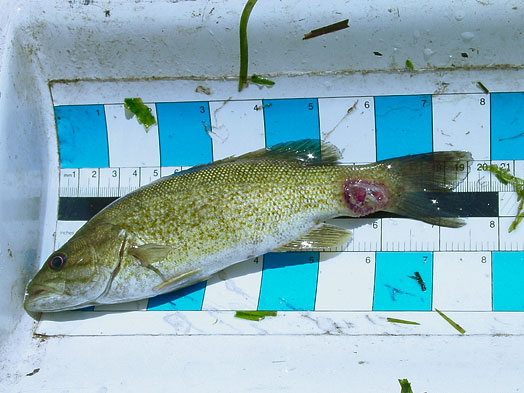 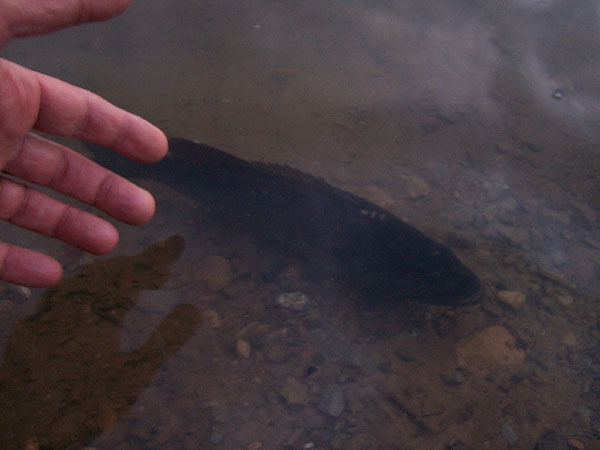 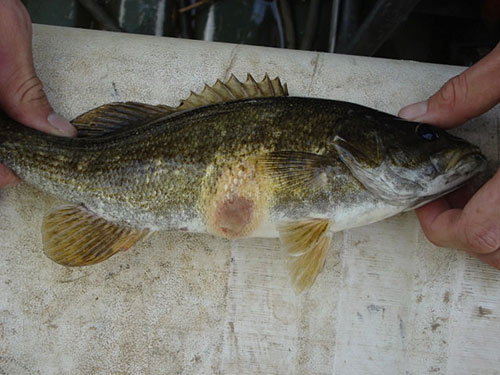 Smallmouth bass with lesion and fungus. 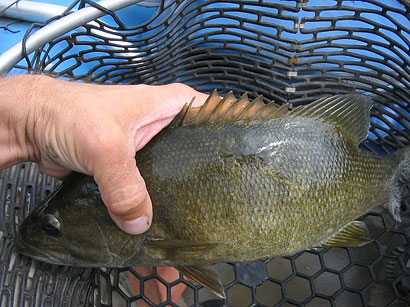 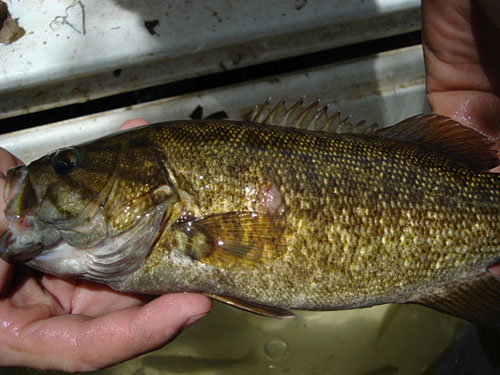 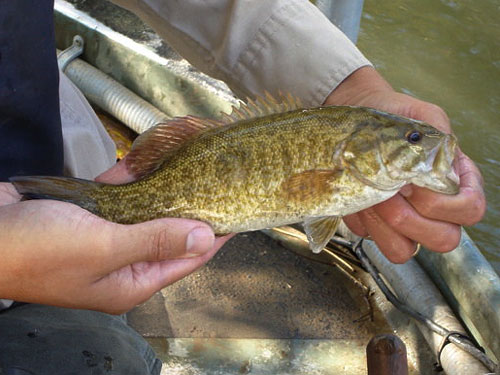 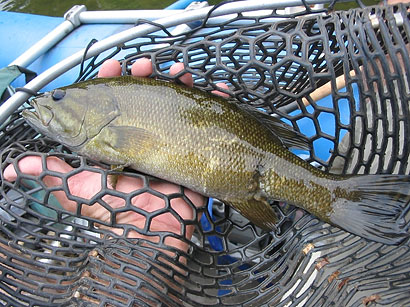 Smallmouth bass with healed lesion in late summer (near tail of the fish). 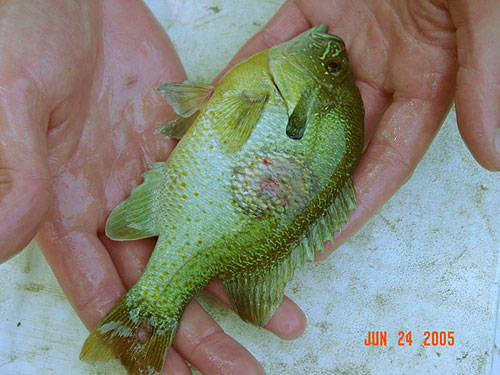 Redbreast sunfish with circular lesion (in the early stages).