The northern pinesnake (Pituophis melanoleucus melanoleucus) is a large, stout-bodied, non-venomous snake. Adult size ranges from 48 to 66 inches (122-168 cm) long. The largest specimen is nearly 7 feet. In Virginia, maximum known length is 65 inches (167.8 cm). It has irregular black to dark brown blotches on a white, cream, yellow, or light gray background body color. The belly is white, cream, or yellow and patternless, with dark spots on the sides. Juveniles are patterned as adults but have black markings on a white body. No data are available on hatchlings from Virginia. Both male and female pinesnakes appear similar. 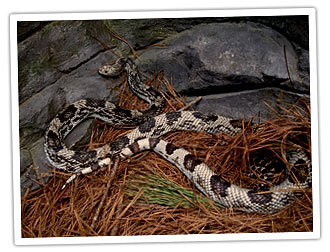 The northern pinesnake ranges fairly continuously in Alabama, Georgia and South Carolina, but only have scattered occurrences in Tennessee, southern Kentucky, western Virginia, and New Jersey. They are believed to be extirpated from West Virginia and Maryland.

In Virginia, they have been verified in Augusta, Bath, Botetourt, and Craig counties. Unverified records are known from Giles to Shenandoah counties.

The pinesnake is a secretive, burrowing species. They spend much of their time in abandoned animal burrows or burrows of their own construction dug under old stumps or similar cover. To construct a burrow, pinesnakes use their heads to loosen the soil and push it back. They then use their coiled bodies and tails to shift the sand further backward and out of the burrow. They spend winters in deep underground burrows and summers in shallower underground dens.

The full activity season for this species in Virginia is unknown. In other states, observations have been noted from April-October. Pinesnakes are primarily diurnal, though they may become more nocturnal in the hot summer months.

When cornered, a pinesnake will coil its body, hiss loudly, vibrate its tail, and strike rapidly. This is all an act to intimidate its predators. The hissing sound is accomplished by inflating its lung and moving air across a flap (epiglottis) in its mouth.

Females normally dig massive burrows in which to deposit their eggs. These “nesting” burrows can be over 10 feet long and over 2 feet deep. A pinesnake burrow is truly an impressive sight, with the sand pile excavated by the female being sometimes 2 or 3 feet across! The northern pinesnake mates in spring after coming out of winter hibernation. Approximately 3–27 cream to white eggs, 2–4¼” (50–109 mm) long, are laid in burrows several inches beneath the surface in sandy soil or below large rocks or logs. The eggs hatch in 64–79 days, and young are 9–20 inches long at hatching. The presence of old egg shell fragments indicates that some burrows are used repeatedly for several years. Reproduction has not been observed in Virginia.

In addition to being a Species of Concern in Virginia, the northern pinesnake is also listed as Tier I species in Virginia’s Wildlife Action Plan, indicating that it is at critically low levels and an extremely high risk of extirpation. In other states, habitat destruction is the primary reason for its decline. Most Virginia records are on U.S. Forest Service land, which may protect the species. Other factors such as road mortality, illegal collecting (for the pet trade), persecution and killing of snakes, and predation by cats and dogs may also contribute to its rare status.

Before any conservation or management can take place, the first step is to determine locations of the species. Unfortunately, most observations go unreported because few realize the uniqueness of this species. The Virginia Department of Game and Inland Fisheries (VDGIF) is working with hunters, wildlife watchers, and other outdoor enthusiasts to find and report their pinesnake sighting.