Usually undertaken by an adult pair, nesting activities are shared by both sexes. Even incubation by the male is common. In a recent nesting study in Virginia, males incubated 25 percent of all clutches.

A single nesting cycle requires 47-55 days, beginning with nest site selection and nest construction. Nests are constructed on the ground in a slight depression. Construction material is typically leaves and stems of grasses and forbs. Pine needles will also serve this purpose. Nest sites are usually where a clump of grass or other suitable vegetation forms a canopy to hide the incubating bird and the eggs. Broomsedge with bare ground often serves this function. Mentioned earlier, broomsedge invaded by tall fescue loses its suitability for nesting as well as most other activities. Nests are frequently located within 50 feet of an edge or opening having bare ground, where the nesting bird can easily reach to forage or join its mate when off the nest.

Eggs (the clutch) are laid at a rate of one a day. Much of the variability in the number of days required for nesting is due to clutch size. Clutches usually range from 10 to 15 eggs, but may go as high as 20. Typically the number of eggs per clutch declines with each subsequent nesting effort. During the Virginia nesting study, clutches averaged 13 eggs, ranging from nine to 19. Incubation requires 23 days. 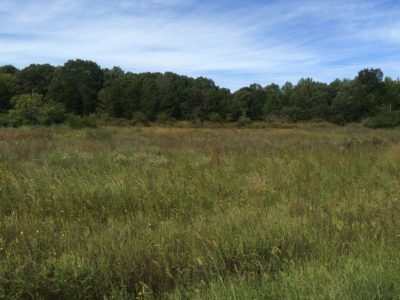 Native warm season grass plantings can augment nesting cover in areas where it is lacking. Percentage of grass cover need not exceed 30% to 40% of the vegetation. Using a light seeding mix of 3 to 5 lbs of short growing native grasses like little bluestem along with a few native legumes and wildflowers works well. Consult your private lands wildlife biologist for more help.

The persistence of bobwhite hens, trying to be ultimately successful, has resulted in quail having one of the longest nesting seasons of all birds. Nesting activity begins in April and often extends into September; occasionally, even October. When nests are destroyed or abandoned before incubation is complete, hens frequently renest. Some hens, following laying, leave incubation to the male and will undertake a second nesting. This, “double clutching,” also accounts for some nests still being active during late-summer.

The management implications of season length are clear: Suitable nesting cover must be available from April through September. Many attempts will fail. The greatest chance for nest success lies in the availability of season-long cover for second or third efforts.

Preferred nesting cover includes a mix of erect grasses, forbs and scattered shrubs or brambles at a moderate density and height. Idle land nearing or in the old field stage, provides the cover most frequently used for nesting. Unimproved pastures (moderately grazed), filter strips, and the edges of crop fields, woods and roadways often contain the mix and density of plants quail seek for nesting. Old fields and areas with similar characteristics will continue to be used for nesting as long as a diversity of herbaceous plants dominate and the ground surface is not uniformly covered with a dense mat of vegetation. No-till row crops are sometimes used for late-season nesting.

When considering the availability of nesting cover, look for old field conditions with scattered clumps of broomsedge or other native grasses. These grasses can be good indicators of potential nesting cover, but other conditions must be considered as well. A frequent mistake is to assume that “grassland”, regardless of its condition, will be selected for nesting. Although grasses are frequently used for nest construction and provide the nest canopy, a monolithic stand of densely growing grass, even broomsedge, is not desirable nesting cover. Neither are recently fallowed fields, though valuable in so many ways. These seldom have adequate grasses present.