Horsepen Lake is a 19-acre impoundment located entirely within the Horsepen Wildlife Management Area in Buckingham County, Virginia. The lake is one of several department-owned lakes created in the 1930’s.

The lake underwent repairs on the riser tower after the lake developed serious leaks in 2001. The impoundment was refilled and restocked in 2002. Since the lake reopened fishing has been consistently good with a number of quality fisheries available to anglers.

The Virginia Department of Wildlife Resources (DWR) requires an Access Permit for visitors to department-owned Wildlife Management Areas (WMAs) and public fishing lakes, who are age 17 and older, unless they possess a valid Virginia hunting, freshwater fishing, or trapping license, or a current Virginia boat registration. Learn more about the Access Permit.

To reach Horsepen Lake, travel Route 60 to Buckingham then follow State Route 638 south to the lake. Signs are posted on route 638 directing anglers to the lake.Map 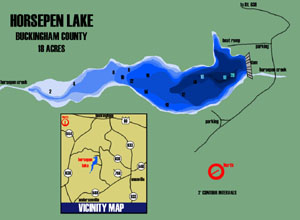 The largemouth bass population at Horsepen Lake is managed with the goal of producing a trophy fishery. This is done using trophy regulations that restrict harvest to one fish 22 inches or greater a day. The lake boasts above average catch rates with high number of bass between 11-16 inches and fair numbers of bass up to and over 20 inches. Target shallow flats and drains with soft plastics and moving baits around the spawn (April-May). During the remainder of the year fallen trees and woody cover off the bank can be productive. Skipping baits under the Azaleas and Button Bush that line the majority of the lake can be productive for smaller fish throughout the year.

Black Crappie have become prevalent in Horsepen Lake. Generally, Crappie are an undesirable species in ponds and small lakes. However, high angler harvest has helped to create a quality fishery with fish up to and over 12 inches present. Anglers are strongly encouraged to harvest crappie from the lake.

Horsepen Lake has a single lane boat ramp and a gravel parking lot. Bank fishing access is limited to the lower section of the lake near the pavilion. Several fish attractors have been constructed for both bank and boat fishermen. These include hinge trees, brush piles and various other structures scattered throughout the lake to concentrate fish.