Lake Chesdin is a 3,100-acre water supply reservoir on the Chesterfield-Dinwiddie County line administered by the Appomattox River Water Authority. Lake Chesdin is a very productive lake that offers excellent largemouth bass fishing, good crappie fishing (both black and white) in spring and fall, and a great channel catfish fishery. Recent walleye and striped bass stockings have provided anglers with additional fishing opportunities. The abundant forage base, primarily in the form of gizzard shad, provides great bounty for various predator species to prey upon.

From Richmond, take I-95 South to the Temple Ave exit in Colonial Heights, then turn left at light onto Temple Ave Westbound, turn left onto U.S. 1/301 South, follow approximately 1 mile turn right onto Dupuy Ave follow Dupuy Ave to light at Rt. 36. Turn right onto Rt. 36 West/River Road and follow through Matoaca to the private boat ramp on the North shore at Seven Springs Marina.

Follow the above directions to Rt. 36, then turn left on Rt. 600 in Matoaca (Pickett Ave turning into Ferndale Road), turn right onto Rt.601 (River Road), turn onto Rt. 776 for the public boat landings or continue on Rt. 601 and follow signs to the private ramps at Whippernock (Rt. 623) Map and Lake Chesdin Campground on the south shore of the reservoir. Routes 601 and 623 can also be reached via U.S. Route 460, West of Petersburg.

Historically, Lake Chesdin has been considered an excellent bass fishing lake. It can also be one of the more difficult lakes in Region 1 to fish. The abundance of gizzard shad along with a stunted bluegill population provides bass with plenty of forage to stack on weight. It is not uncommon to have a 20-inch bass from Lake Chesdin weigh in at 5.5 to 6 pounds. Anglers reported catching their fair share of bass in the 6 to 8-pound range during the 2018 fishing season, with the largest bass of 11 lbs. 2 oz. bringing additional excitement. An electrofishing survey is conducted on Lake Chesdin every spring to assess the fishery. The 2019 survey was conducted on May 8th. A total of 174 largemouth bass were collected for a catch rate (CPUE) of 116 fish/hr. The CPUE showed a decline from the 2018 survey (CPUE = 142 fish/hr). The catch of preferred-sized bass (≥ 15”) was 54 fish/hr, which also showed a decline from the record 2017 CPUE-P of 71 fish/hr. Lake Chesdin has been the #1 bass fishery in Region 1 for CPUE of preferred-sized bass these last few years. The timing of any electrofishing survey has a major impact on the CPUE as Lake Chesdin is typically surveyed toward the first week of May. The size structure of the bass population still remains in great shape with an abundance of bass in the 15 to 20-inch size range. Relative weight data continues to be favorable as collected bass showed good body composition.

Lake Chesdin has been known in the past for its crappie fishery. The crappie population within Lake Chesdin consists of both black crappie and white crappie. The vast majority of the black crappie are small and average in the 8 to 9.5-inch range. There is a certain proportion of the black crappie population that manages to break away from the bottleneck and reach impressive citation sizes (≥ 2 pounds). These larger crappie are able to focus their attention on the juvenile gizzard shad that are extremely abundant during the summer and fall months. Some dedicated crappie anglers were able to catch some extremely impressive crappie from the lake during the early spring of 2019. They weighed in trophy crappie from 3 lbs. 5 oz. to 3 lbs. 12 oz. to break the big crappie pot at Whippernock Marina. Based on the photos of these fish, it appeared that they were a hybrid between black and white crappie. These trophy fish are surely eating their fair share of gizzard shad. White crappie are not nearly as abundance as their cousin the black crappie. Higher concentrations of white crappie are usually found toward the upper third of the lake in the more riverine section that is typically more turbid. Anglers are encouraged to harvest their legal limit of black crappie to assist in thinning out the stockpile of stunted fish that exists.

Lake Chesdin has an abundance of bluegill, but similar to most reservoirs with a healthy gizzard shad population, the bluegill population leaves something to be desired. The majority of collected bluegill over the last few years have been in the 3 to 6-inch range, with very few fish ever making it past 7 inches in total length. Lake Chesdin has a decent population of redear sunfish with fish typically being caught in the 7 to 10-inch range. Some redear sunfish have been pushing close to 11 inches in length.

Lake Chesdin has historically been stocked with walleye fingerlings when DGIF hatcheries had a surplus of fish available. This staggered stocking approach never really allowed for a strong population to be established. The years of 2013 through 2015 were extremely kind to Lake Chesdin as walleye and saugeye were stocked in 2013 and 2014. Hatchery staff were able to provide roughly 150,000 walleye fingerlings in 2015. The walleye and saugeye fingerlings were stocked in a pelagic manner by boat to allow for greater dispersal of the fish to roughly 30 locations each year toward the eastern half of the lake. The 2013-year class of saugeye did extremely well with fish pushing upwards of 7 pounds by the fall of 2017. Bass anglers have been able to catch a decent number of walleye and saugeye on deep diving crankbaits and the occasional soft plastic bait. The saugeye from the 2014 stocking should continue to provide some action and from all indications the 2015 stocking of walleye has yielded some fast growing fish. Some walleye and saugeye managed to survive getting washed over the dam during high flow events to provide a quality angling experience in the Appomattox River below the lake. Do to limitations in hatchery production, the lake did not receive any walleye or saugeye fingerlings during 2016 – 2018. On a positive note, Lake Chesdin was stocked with 89,000 saugeye fingerlings in May 2019. It will take a few years for these fish to provide anglers with excitement. Walleye and Saugeye have a creel limit of 5/person/day in aggregate with a minimum size limit of 18 inches.

Lake Chesdin has never been known for its striped bass fishery, although an occasional large fish is caught. This species is stocked annually at a rate of 25 striped bass fingerlings/acre (N = 77,500). Late fall gill net surveys have been a chore as finding a representative sample of the population has been next to impossible with very few fish caught each year. The few striped bass that manage to grace our gill nets are in great shape with extremely high relative weight values. Though they are elusive, striped bass do support a small fishery in the lake that a few die-hard anglers will try their luck on. In the spring, some striped bass have migrated up the Appomattox River on a spawning run, providing some unique angling opportunities upstream as far as the Farmville area.

Lake Chesdin has a strong channel catfish population with excellent eating-size fish from 2-4 pounds being extremely common. Anglers can catch a decent number of channel catfish in the 5 to 7-pound range when conditions are favorable. Collected channel catfish are typically very fat and healthy looking. Anglers are encouraged to take advantage of this under-utilized resource. Recent DGIF surveys have shown an increasing abundance of flathead catfish in the lake. Collected flathead catfish have been in good physical condition with the majority of fish in the 8 to 12-pound range. Flathead catfish will forage heavily upon the stunted bluegill population. The fishery has a limited abundance of blue catfish that might surprise and angler from time to time. The fishery has an abundance of white catfish, with most fish small and in the 8 to 11-inch range. Lake Chesdin has some better than average brown bullhead with most fish found in the 10 to 13-inch range. Brown Bullhead are scrappy fighting fish that might provide decent action when the other catfish species are tight lipped. Anglers are cautioned to always watch out for the pectoral and dorsal spines when handling catfish.

White perch is another under-utilized species. They have become more abundant in Lake Chesdin during the last 10 to 15 years, probably at the expense of the bluegill and crappie populations. White perch are common everywhere in the lake, and they are easy to catch on night crawler pieces or red wigglers. If you want to try catching them on artificial bait, use small 1/16-oz, lead-head twister-tail or tube jig, because they have small mouths. A variety of black crappie jigs and soft plastics will also be productive for white perch. The majority of collected white perch have been on the small side with fish typically in the 6 to 8-inch range. If you catch a white perch in the 10 to 11-inch range, consider yourself a white perch wizard. If you’ve never eaten white perch, try them, they are delicious! You might have to fillet a bunch of them, but white perch make great fish burgers.

The 2019 electrofishing survey of Lake Chesdin provided, once again, the highest catch rate of preferred-sized largemouth bass (≥ 15 inches) for all public impoundments sampled in Region 1, District 1. Anglers are encouraged to try their luck fishing for largemouth bass during the summer months in the 12 to 18 feet of water range as fish will school up and chase after gizzard shad. Some topwater action may occur when bass rise to the surface to ambush schools of juvenile shad. Lake Chesdin will typically have a thermocline set up during the summer at around 19 to 20 feet down in the water column. The water willow is a great place for finding bass during the months of March through May. Lake Chesdin has a surprising number of large male bass in the 18 to 22-inch size range that can be found guarding their spawning beds in the water willow pockets. Anglers that find Lake Chesdin difficult to fish should keep trying various lure presentations and patterns until they find something that works.

Lake Chesdin has a public boat ramp and fishing pier located just upstream of the dam (see the map and directions section). There is a large parking lot, porta-john, and a very nice launching pier with a boat ramp on either side of it.

There are also three fee ramps around the lake that have a variety of facilities including concessions, rental boats, picnic tables, etc.

The 2019 electrofishing survey of Lake Chesdin provided, once again, the highest catch rate of preferred-sized largemouth bass (≥ 15 inches) for all public impoundments sampled in Region 1, District 1. Anglers are encouraged to try their luck fishing for largemouth bass during the summer months in the 12 to 18 feet of water range as fish will school up and chase after gizzard shad. Some topwater action may occur when bass rise to the surface to ambush schools of juvenile shad. Lake Chesdin will typically have a thermocline set up during the summer at around 19 to 20 feet down in the water column. The water willow is a great place for finding bass during the months of March through May. Lake Chesdin has a surprising number of large male bass in the 18 to 22-inch size range that can be found guarding their spawning beds in the water willow pockets. Anglers that find Lake Chesdin difficult to fish should keep trying various lure presentations and patterns until they find something that works. 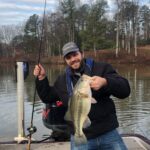 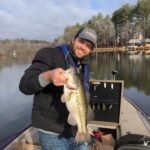 Winter is a great time of the year to target big largemouth bass on Lake Chesdin.

Additional information may be requested from: