Up in the Alleghany Highlands, nestled into a canyon once called Kincaid Gorge, lies Gathright Dam. This massive earthen structure backs up the Jackson River for over 12 miles, forming Lake Moomaw. A U. S. Army Corps of Engineers project, Lake Moomaw was constructed for downstream flow augmentation (water quality), flood control, and recreation. The idea for a lake above the City of Covington was hatched just after World War II, but the project was not completed until the early 1980’s. The backwater of the Jackson River flooded acres of bottomland once owned by Thomas Gathright. The project was pushed forward by Covington businessman Benjamin Moomaw, after which the lake was named.

Lake Moomaw is the second largest impoundment in western Virginia. It covers 2,530 surface acres and has a maximum depth of 152 feet. The impoundment is “drawn down” between 10-15 feet annually, beginning slowly in June and reaching its lowest level usually by September. There are 43 miles of undeveloped, wooded shoreline.

Before it was completed, fisheries biologists determined that Lake Moomaw had the potential for a “two-story” sport fishery. This simply means that the reservoir would be deep enough for both warm water fish (bass, catfish, sunfish, crappie) and coldwater fish (trout). With this in mind, the lake was stocked with thousands of largemouth bass, bluegill, redear sunfish, and channel catfish in 1980. The Jackson River was already home to wild populations of smallmouth bass, rock bass, and chain pickerel, so it was understood that these species would acclimate to their new surroundings. Black crappie and yellow perch were later additions to the fishery.

Lake Moomaw is also known for its trout fishery. A layer of cold, oxygenated water lies 15 feet below the surface. It is in this zone that stocked rainbow, brown, and brook trout thrive. Alewives, members of the herring family, were stocked in the early 1980’s in order to establish a plentiful food base for both trout and other predators. These small, silvery fish are truly the “backbone” of the lake’s sport fishery. They are abundant, ubiquitous, and, seemingly the prey of choice for trophy fish that are caught from Lake Moomaw.

Alewives are members of the herring family and are, literally, the backbone of the lake’s sport fishery. Transplanted from Smith Mountain Lake and Flanangan Lake in the early 1980’s, the alewife has thrived in the clear, deep waters of Lake Moomaw. Alewives are a schooling fish, occupying the open waters of the lake. They grow up to 7 inches, but average 4-5 inches long. The alewife is the classic prey species for open water predators such as trout, walleye, and striped bass. In Moomaw, the alewife is the perfect link in the food chain between the microscopic plankton and the lunker brown and rainbow trout. In fact, almost all of the predacious fish species in the lake utilize alewives in their diet. Although they have a reputation for large “die-offs” during long periods of cold weather, alewives have done extremely well at this mountain reservoir.

Brown and rainbow trout have been stocked annually since the early days of the lake. Brown trout have done extremely well, and it is not uncommon to catch brown trout in the 3-5 pound range. They are especially active in late winter and early spring, when they can be found in 15-20 feet of water engorging on alewives. Rainbow trout come in two varieties: McConaughy and Eagle Lake. Biologists determined that a “lake-run” strain of rainbow trout would thrive in Lake Moomaw as well as the Jackson River above the lake. As it turns out, the McConaughy rainbow has done very well in this system. Large silvery rainbows can be caught during late winter through spring in the Jackson River as far as Highland County. Those that remain, or return, to the lake can be found in trophy proportions. Eagle Lake rainbow trout have been mixed into the stocking plan. Eagle Lakes appear to be less migratory and can devote most of their life gaining weight in the deep waters of the reservoir. Brook trout have been periodically stocked to add variety to the coldwater fishery. Trout can be caught at Lake Moomaw at least three different ways: trolling, still fishing with live bait (alewives or shiners), or “jump fishing” when they are active slurping insects or surface running alewives. Neither a trout license nor National Forest Stamp is required.
Black bass

Two types of black bass — smallmouth bass and largemouth bass – currently occupy the waters of Lake Moomaw. Smallmouth bass, present in the river before the lake was formed, have thrived along the rocky shorelines and steep cliffs (particularly above McClintic Point and around Coles Point). Smallmouths can be found deep (25 ft.) in the lake during summer and winter, and moving along the shallows in spring and fall, searching out food and spawning habitat. Largemouth bass prefer the numerous shallow flats in the lake’s center, particularly around Greenwood Point, the swimming beach, and the islands. Try plugging or jigging around weedy areas, old roadbeds, and grass beds in 8-10 feet of water for best largemouth bass results.

Yellow perch are “the new kids on the block” at Lake Moomaw. Actually, they were introduced with a load of stocked fish in the 1980’s, but it took a full decade before numbers of trophy size yellow perch became the norm. The state record yellow perch was caught, then surpassed, then caught again at Lake Moomaw in 1999 (2 lb, 7 oz). Yellow perch are often taken using techniques and lures that commonly work for black bass in the spring. However, late winter yellow perch fishing (either through the ice or drifting minnows in 10 feet of water) at Moomaw can provide a much-needed remedy for cabin fever.

Black crappie, bluegill, and redear sunfish are the big three panfish species in Lake Moomaw. To a lesser degree, pumpkinseed, rock bass, and redbreast sunfish, make up the remaining component of this popular sport fish group at the lake. Black crappie have done extremely well. The initial stockings of stunted black crappie from Rural Retreat Lake in the early 1980’s have produced generations of 2 pound fish over the years. Black crappie are notorious for having boom-and-bust years, but crappie fishing has been consistent. Hinge trees and brush shelters that work well for bass also benefit the crappie. As with yellow perch, crappie fishing at Moomaw is at its best during the waning weeks of cold weather using live bait. Once a school is located, it is not uncommon to witness stringers of quality size fish. Bluegill and redear sunfish have been coming on strong during the 1990’s. To witness large bluegill at the lake, take a quiet stroll out on a boat ramp at one of the landings. In the shadows, schools of fat gills lazily swim about, eager to take a worm. Redear sunfish lie in slightly deeper waters, but are found tight against the shore in May. One pound redears have been taken from Lake Moomaw, from time to time. Rock bass, pumpkinseed, and redbreast sunfish can be quite large, but their numbers are somewhat depressed.

Lake Moomaw boasts two types of catfish species: channel catfish and yellow bullheads. Channel catfish have done very well since they were introduced in the early days of the lake. Stumps at the edge of the river channel, as well as old muskrat holes serve as habitat and spawning areas for this popular game fish. Channel catfish in excess of 20 pounds have been caught on cut bait and live bait, but 10-15 pounders are caught more frequently. Bullheads were abundant in a couple of farm ponds prior to the lake being filled, hence they were introduced “accidentally”. Yellow bullheads do very well in the shallow flats around mid-lake. They provide good recreation for young fishermen and are a preferred food fish among some of the angling community.

This small member of the pike family haunted the cool waters of the Jackson River prior to lake construction. Once the waters rose, the chain pickerel adapted quickly, and large (4-5 pound) “pike” were caught with consistency. Chain pickerel love the shallow, weedy areas around mid-lake and Greenwood Point. They hit with the ferocity of their larger cousins, the northern pike and the muskellunge. Surface plugs provide the best action in early spring, but pickerel can be take year round with plastic bodied jigs. 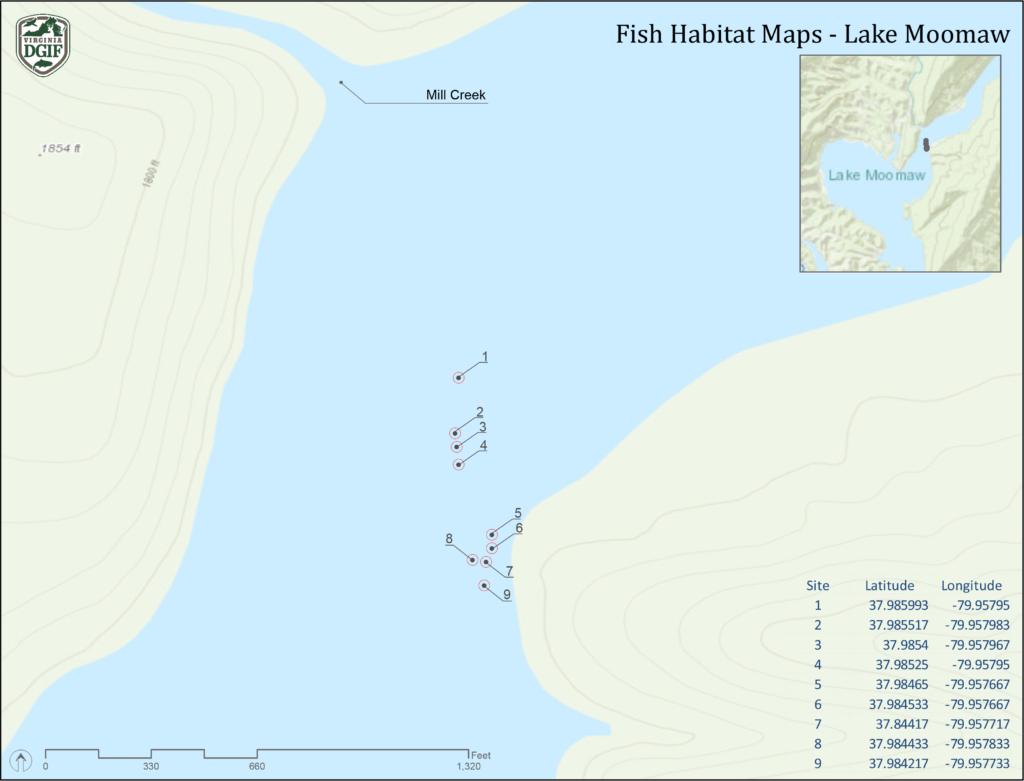 Two trout per day with a minimum size limit of 16 inches. Anglers are cautioned to handle undersized trout with care to avoid delayed mortality.
Neither a trout license nor National Forest Stamp is required.

Five bass in aggregate can be creeled daily. Bass under 12 inches long must be released immediately.

There is no size limit on black crappie and rock bass at Lake Moomaw, but only 25 per angler may be taken daily of each species.

There is no size limit for bluegill, redear sunfish, redbreast sunfish, and pumpkinseed. However, only 50 in aggregate may be creeled daily per angler.

There is no size limit for either channel catfish or yellow bullhead. Anglers may take 20 of each species per day.

There is no size limit for chain pickerel and 5 may be taken daily.

Unlimited horsepower: there are no boat motor restrictions for Lake Moomaw.

Improving sport fish habitat in Lake Moomaw is a two-prong approach. First, coldwater habitat for trout is critical during late summer/early fall. Regulations require that certain downstream water levels and temperatures must be met. Lake Moomaw has 9 portals, distributed vertically along the outlet tower, that enables the U.S. Army Corps of Engineers to meet downstream water quality requirements. Until 1993, the Corps released water nearest the 600F. portal or near the surface. The result was diminished trout habitat (600F. maximum, 5 parts per millions dissolved oxygen). Water from the lake is now mixed before being released below into the Jackson River. Warm, oxygenated water from the surface is blended with cold, anoxic water from deep in the lake, and the result is a more stable band of trout habitat around 30 feet under the surface during late summer. When trout are stressed, then tend to eat less and eventually lose weight. As long as water quality requirements are met, the mixed release method seems to benefit trout in the lake the best.

The other method of fish habitat improvement in Lake Moomaw is adding shallow water structure for species such as black bass, crappie, catfish, and sunfish. During late summer, when the lake is often drawn down 10 feet or more, anglers can easily spot most of this fish cover. The Department and the U. S. Forest Service have cooperated with local bass clubs, the Izaak Walton League of America, the Boy Scouts, and other citizen volunteers over the years to enhance littoral (shoreline) fish habitat. They types of habitat that have been installed over the years have been quite varied, but both agencies now focus on placing natural materials (brush, trees, logs, and rock) into Lake Moomaw. Also, buttonbush has been planted on some of the barren flats to mixed success. In 2001, around 250 white pine Christmas trees were sunk in the upper lake to attract bass and crappie. Future plans are to continue with brush attractors, as well as hinge trees that are cut and felled from the bank.

The only fish family that is stocked annually in the lake is trout. Approximately 35,000 McConaughy and 35,000 brown trout finglerlings are stocked each year. Fingerlings switch to natural food quickly and reach quality size in a couple of years.

Neither a trout license nor National Forest Stamp is required.

Unlimited horsepower: there are no boat motor restrictions for Lake Moomaw.

Neither a trout license nor National Forest Stamp is required.