Few could argue that the Commonwealth of Virginia has not had a profound and lasting effect on the formation of the United States of America, having provided many of its greatest leaders, and unfortunately, hosting some of its fiercest battles. The Battle for Virginia Loop zigzags its way across these battlefields where many Americans lost their lives and where the will of the Confederates was finally broken by the Union forces. These rolling hills, having long since recovered from their battle scars, buried the dead and silenced the cannons, now provide great pastoral beauty and a safe haven for wildlife. The battlefields host families of eastern bluebirds and the occasional displaying American woodcock. The rivers and reservoirs host flocks of mallards and American black duck, and the woods ring anew with the sound of birdsong each spring. Chase down the faint rustling in the leaves to reveal an eastern box turtle or marvel at the splendor of an eastern tiger swallowtail as it flutters between blossoms. Listen for the whispers of the ghosts of America and remember those that came before you. 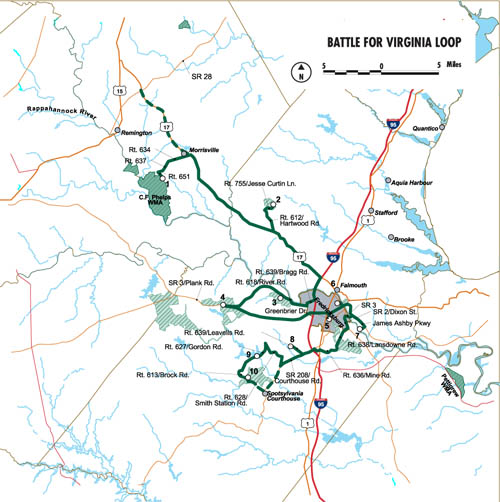