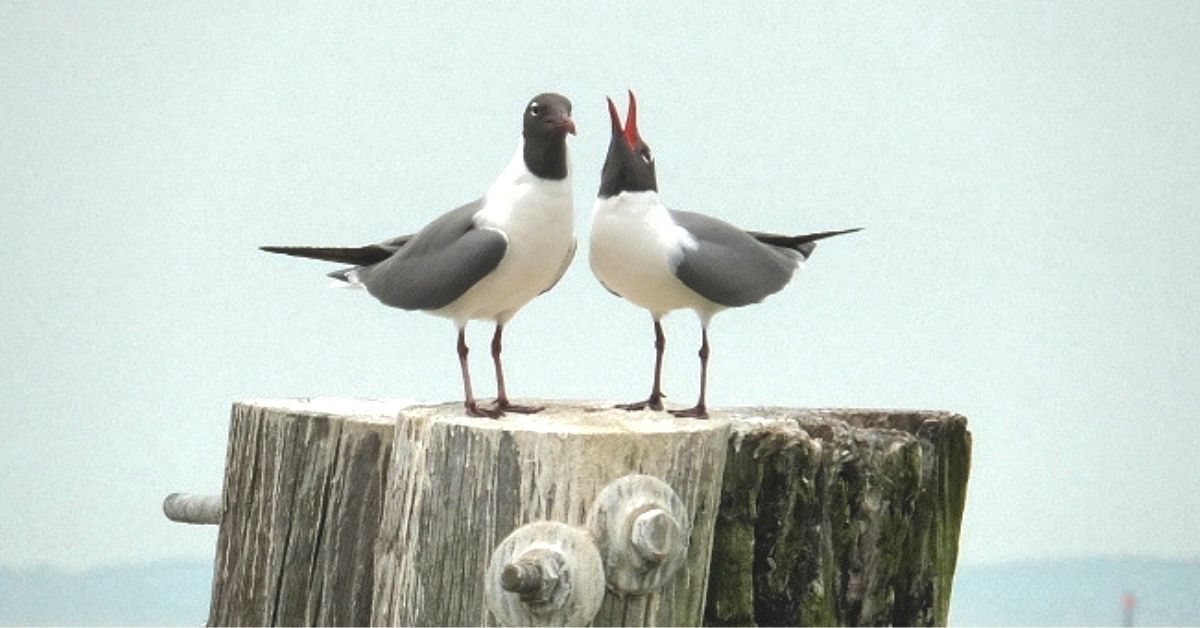 Heading to Virginia’s coast this summer? While you relax on the shore, take a moment to check out the birds. They’re not all just seagulls; there is actually a wide variety of fascinating bird species that spend their lives at sea or along coastlines. This group of birds is known broadly as seabirds. Seabirds include gulls, terns, pelicans, cormorants, and numerous other birds that are well adapted to marine life.

Thirteen seabird species breed in Virginia with the largest single breeding colony being located in Hampton at the newly created habitat complex of Fort Wool and three adjacent barges. The Fort Wool complex is an incredibly important conservation area for Virginia’s seabirds. It is the Commonwealth’s seabird epicenter of sorts with eight species of seabird breeding there, five of which are listed as Species of Greatest Conservation Need in the Virginia Wildlife Action Plan. These include royal tern, common tern, the state-threatened gull-billed tern, laughing gull, and black skimmer. 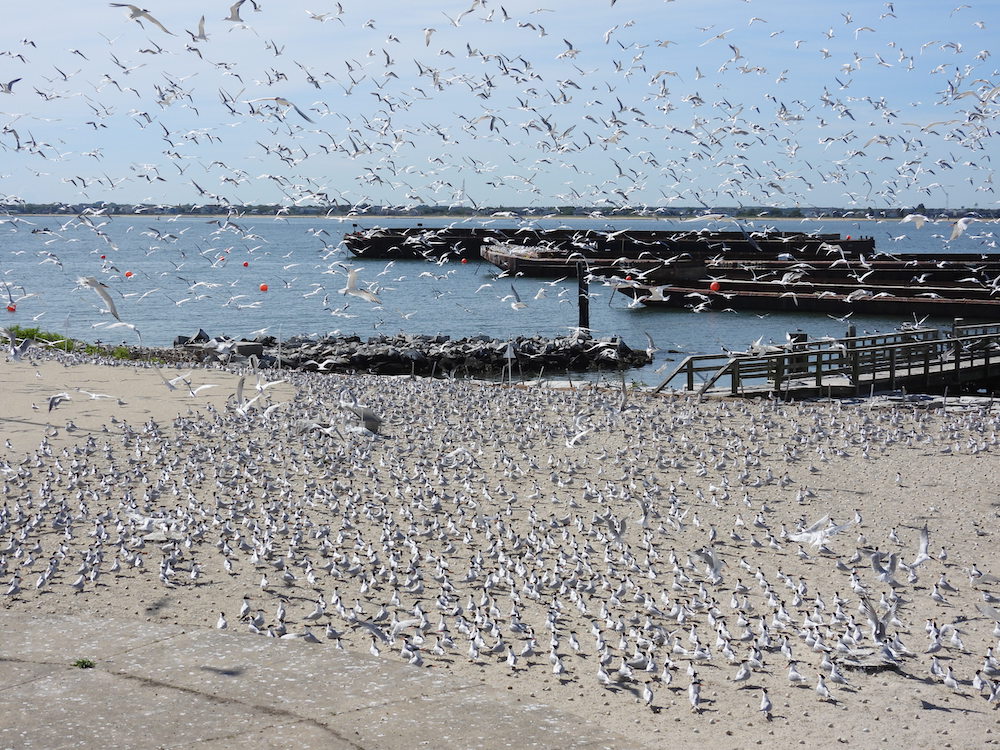 The seabird colony at the Fort Wool complex. Photo by Meagan Thomas/DWR

It is a particularly vital habitat for royal terns and sandwich terns, supporting 80% and 100% of Virginia’s breeding populations, respectively. Remarkably, this same group of birds had previously nested on an artificial island that’s part of the Hampton Roads Bridge-Tunnel, but relocated to the Fort Wool complex in 2020 following the governor’s mandate to provide temporary nesting habitat for seabirds displaced by the bridge-tunnel’s expansion project. (Learn all about this incredible conservation story.)

A Habitat that Extends Far Beyond Fort Wool

All of these seabird species are fish eaters that depend on the healthy waters of Virginia’s larger coastal landscape to find food to eat and feed their young. Some also eat insects, crustaceans, or other aquatic invertebrates. The birds travel around the surrounding waters of Fort Wool on surprisingly distant foraging forays to find their prey, including west up the James River, north up the Chesapeake Bay, and southward along the Atlantic coastline. 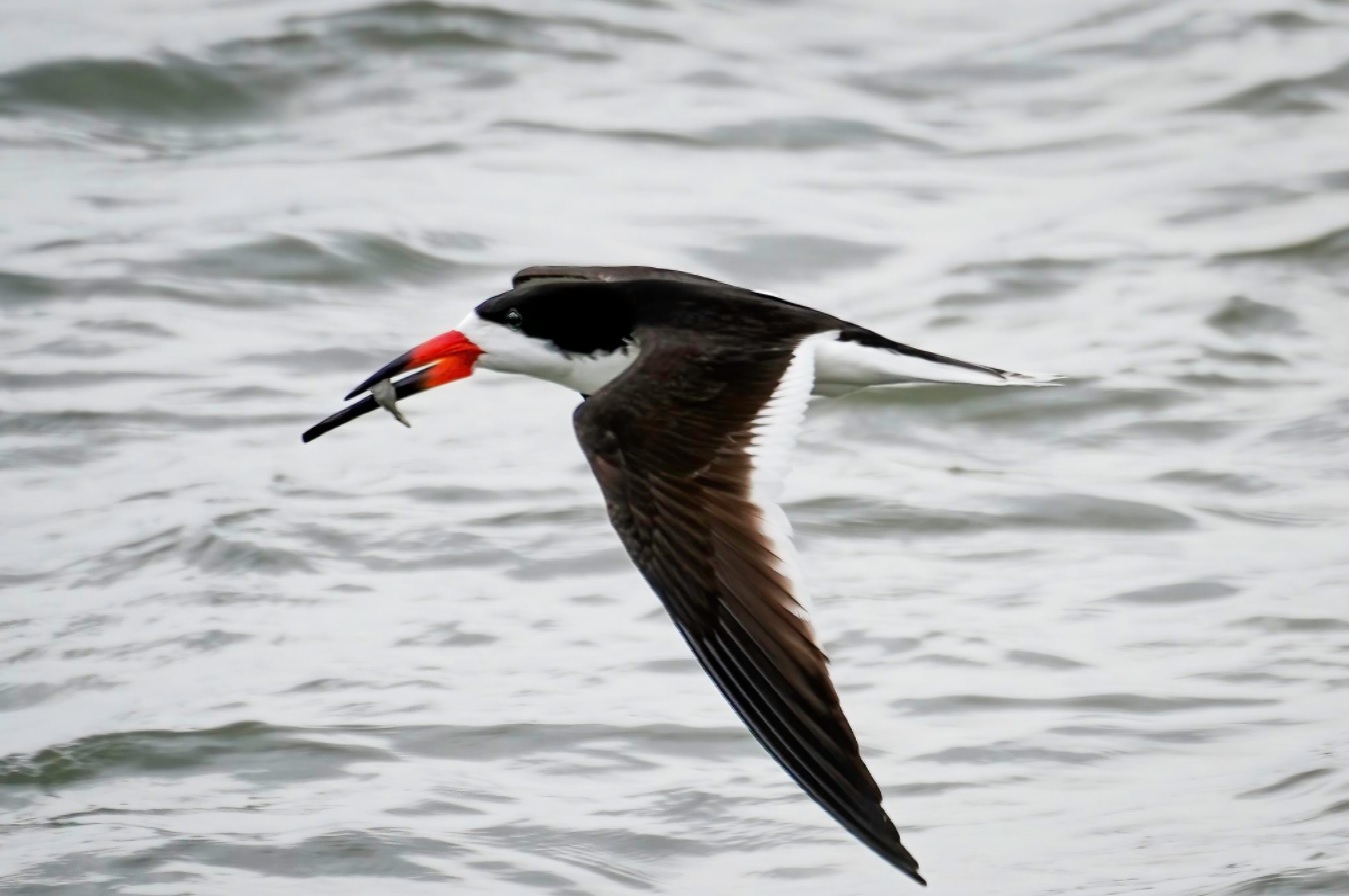 Get to Know Your Seabirds

An easy way to discern whether a seabird is a gull, a tern, or another species is to observe them feeding. Terns are often seen flying with their heads pointed down and they dramatically plunge-dive from the air to catch fish or crustaceans below the water’s surface.

Gulls do not plunge-dive, but instead feed in varied ways. They may tumble down from the air to catch food close to the water’s surface, or while floating they may dip their head under to catch food. They also scavenge on land for nearly any food that is easy to grab and eat.

A unique feeder, black skimmers get their name from their foraging style of flying low over the water with their mouth agape, “skimming” their lower bill through the water’s surface until they feel a fish.

Here are some more tips on how to identify and further distinguish the eight seabird species breeding at the Fort Wool complex. (Note the ID tips below focus on adult birds in their summer breeding plumage. Most of these species have different coloration and patterns in the non-breeding season and as juveniles.) 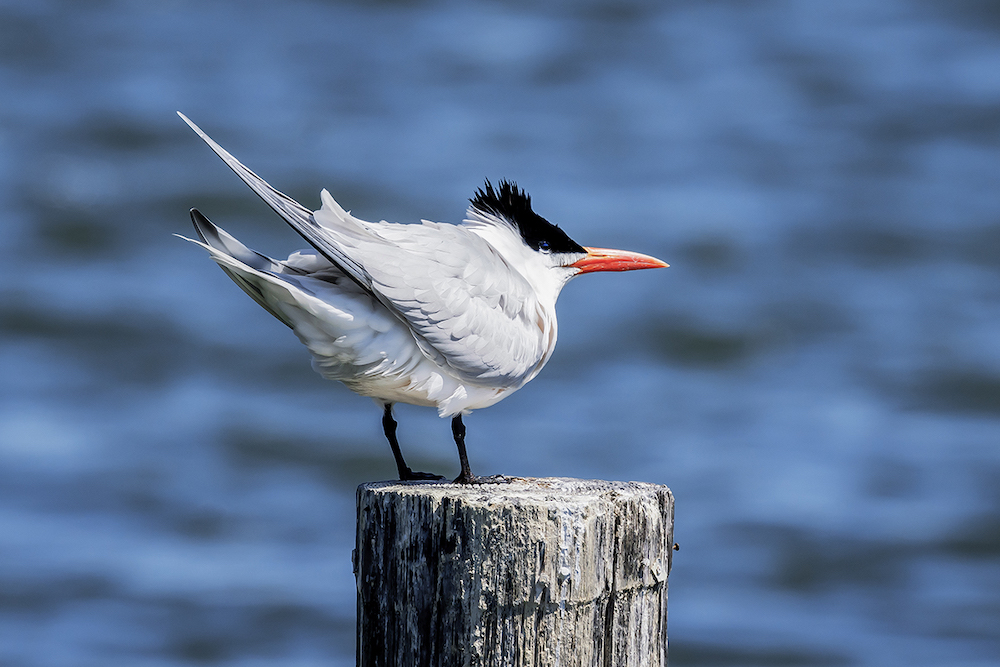 Royal Terns are about the size of a crow with long, pointed wings and a long, deeply forked tail. They have a shaggy black cap on their head and black legs. Their bill is large, bright orange, and dagger-like. 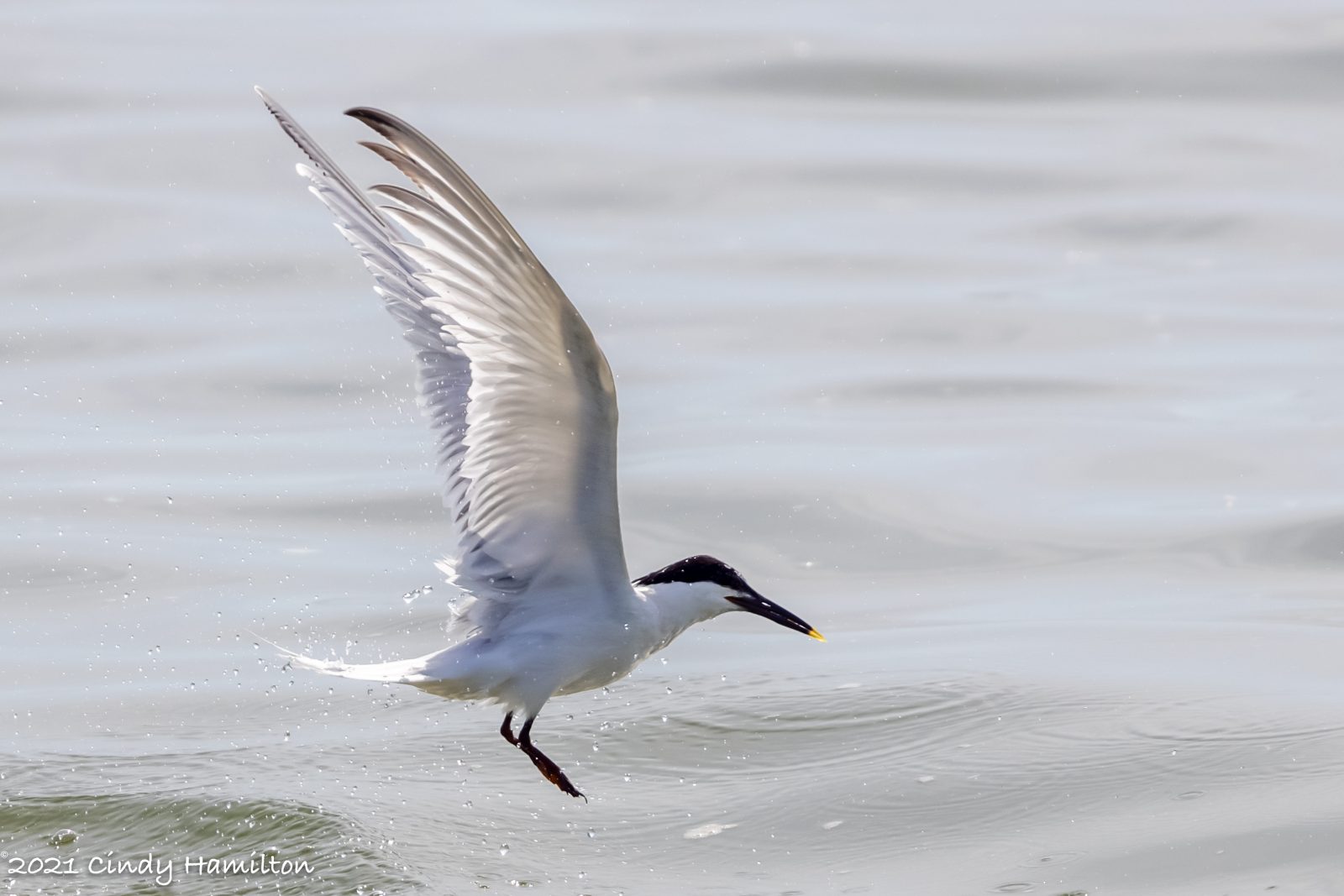 Like royal terns, but a little smaller, Sandwich Terns also have a black cap on their head with a shaggy crest. What really distinguishes them from the royal is their bill, which is long and black with a pale tip. 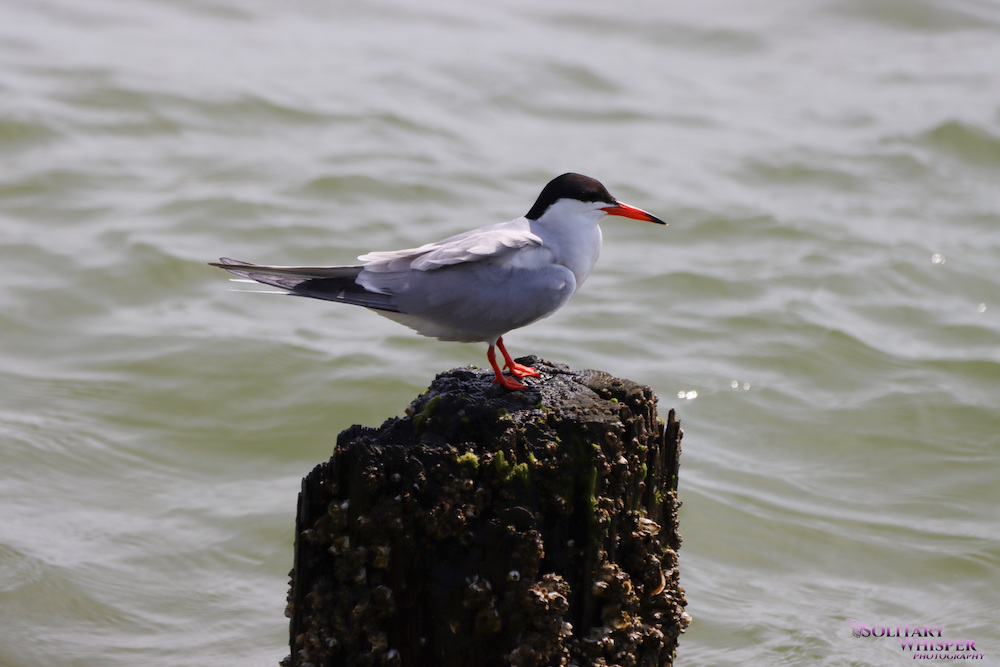 Much smaller than royal and sandwich terns, Common Terns are between the size of a robin and a crow. They have a deeply forked tail; a black cap on their head; a long, slender reddish-orange (and sometimes black-tipped) bill; and reddish-orange legs. 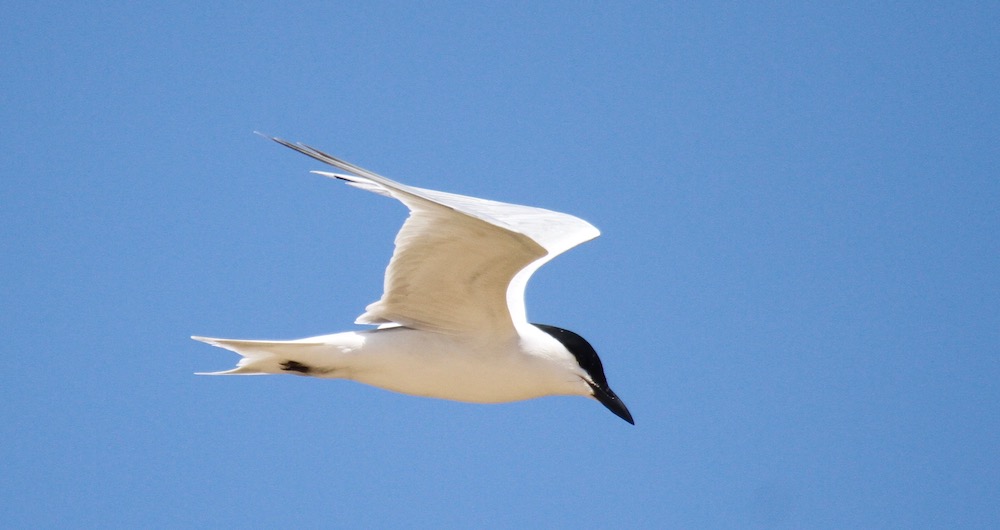 The state threatened Gull-billed Tern is less common to see than other terns. They are similar in size to the common tern and have a black cap on their head, but their body is stocky with a short, notched tail. They have a thick black bill and black legs. 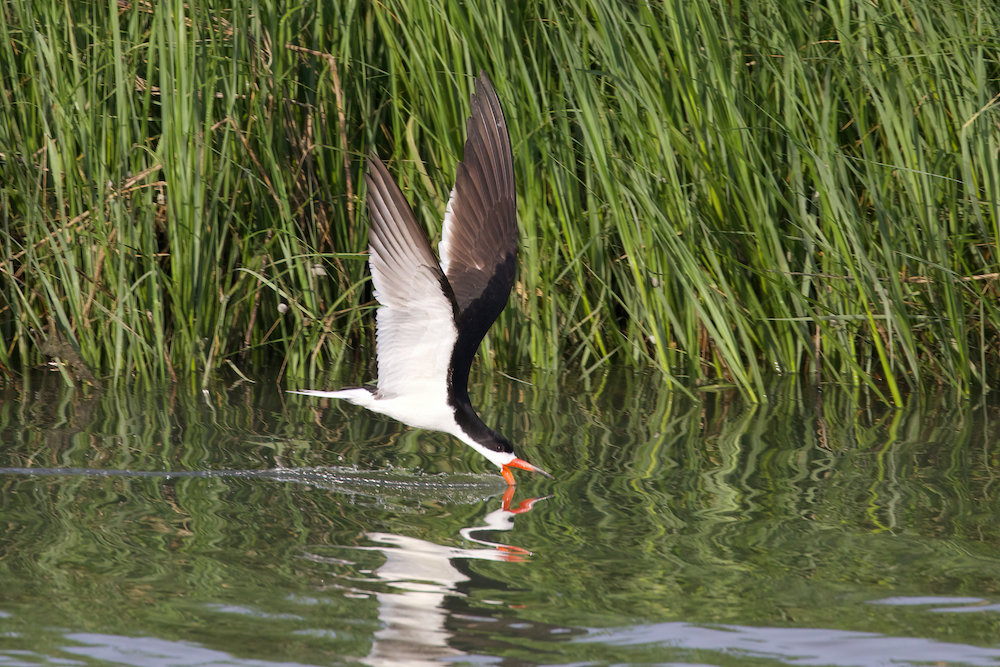 Black on top and white underneath, the striking Black Skimmer looks like it is wearing a tuxedo. They are about the size of a crow and have a disproportionately large, long orange and black bill. Their legs are orange. Your best bet to spot them is primarily at dawn and dusk, when they are most actively foraging. 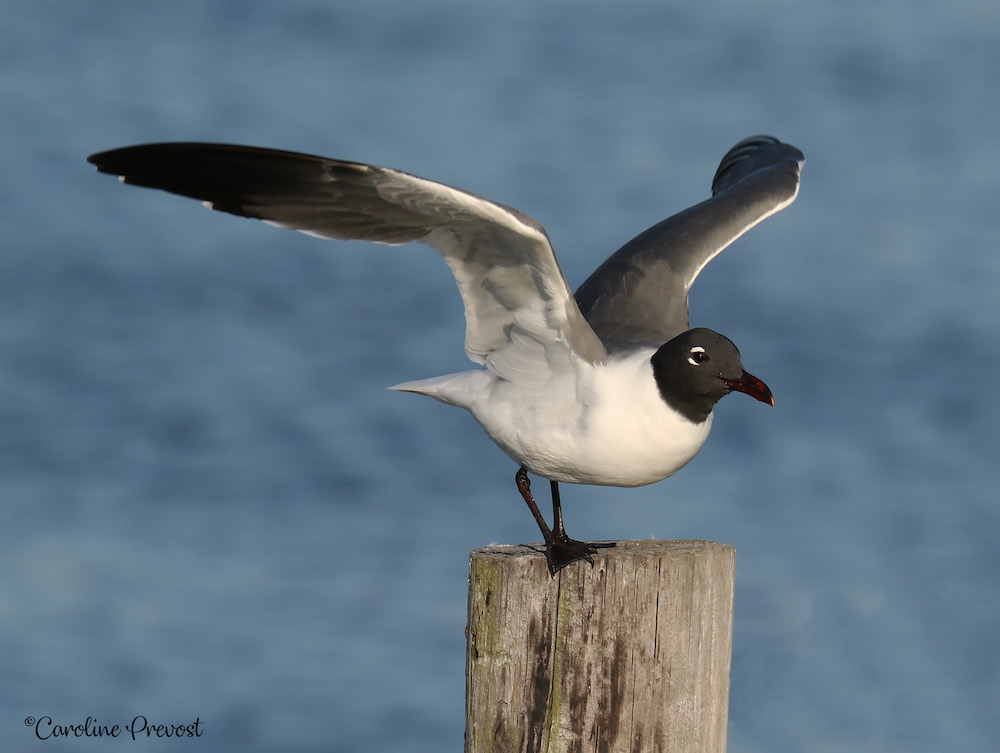 Laughing Gulls are medium-sized gulls (about the size of a crow) and sport a dramatic black-hooded head with small white markings around their eyes and a red bill. Their back is grey. 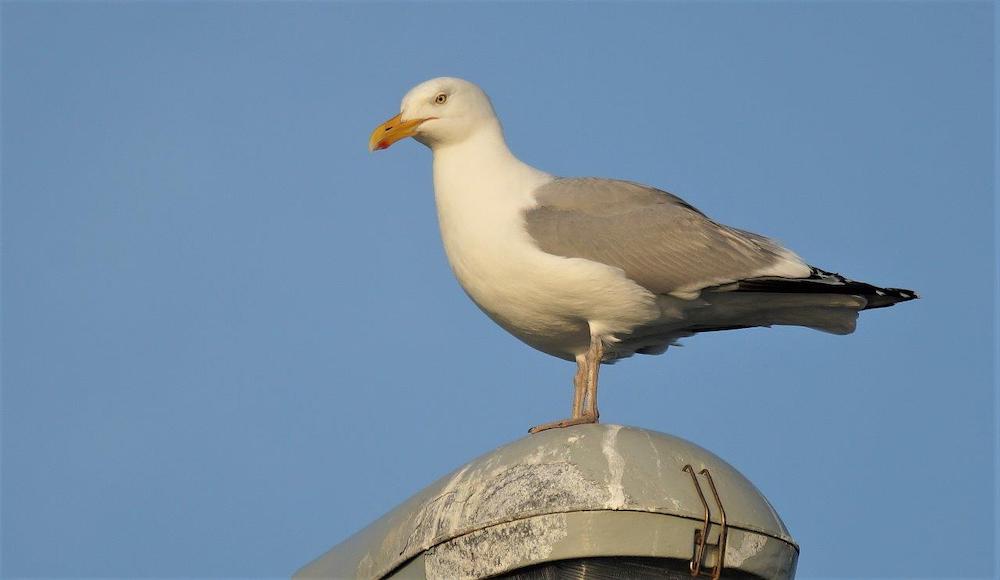 Herring Gulls are one of our most common gulls in Virginia. They are larger than a Laughing Gull and have a pale grey back and wings. Their slim yellow bill has a red spot near the tip. Their legs are pale. 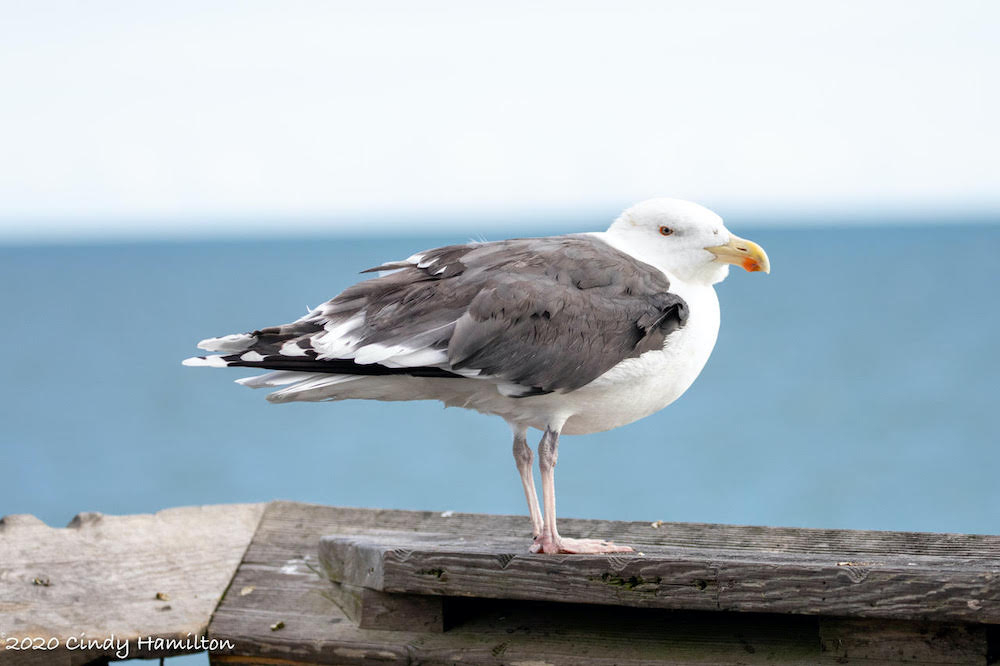 Great Black-backed Gulls are the largest gulls in the world, so they literally stand out from the crowd. They are stout bodied and as their name suggests, they have a black back. Like Herring Gulls, their bill is yellow with a red spot near the tip, but their bill is bulbous in appearance rather than slim. Their legs are pink.

Where to “Sea” these Birds This Summer

Anxious to get out and “sea” these birds in action? Your best bet is to catch a glimpse of them while they are out foraging. The Fort Wool complex itself and the surrounding waters are off limits to visit in order to protect the nesting birds, but there are many accessible areas that provide good views of them while foraging. Fort Wool is really just their home base, so you may observe them along several areas of Virginia’s coastal waters. 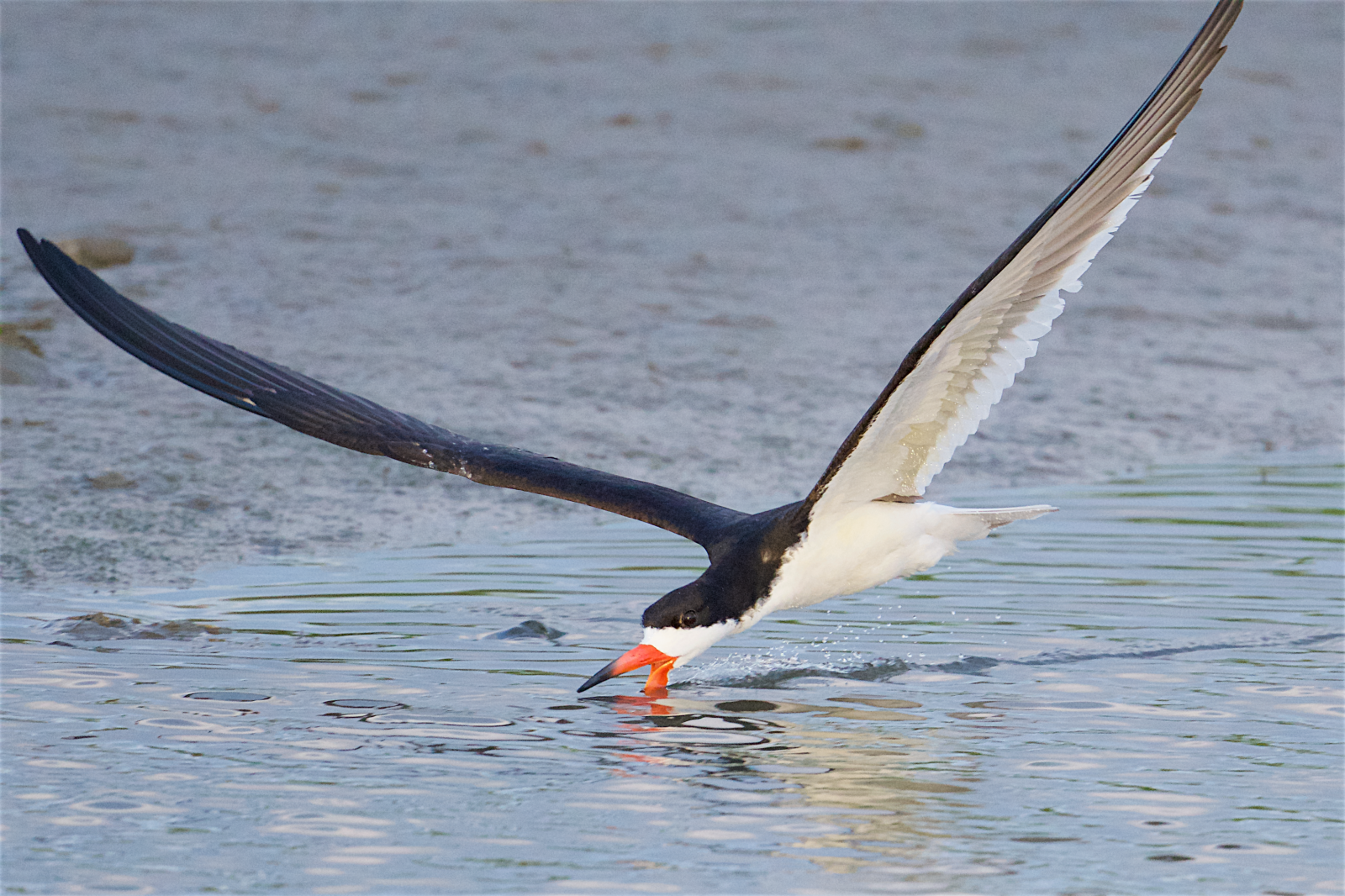 Here is a list of the top spots to see them, most of which are designated sites on the Virginia Bird & Wildlife Trail. To get the best look at the birds, bring binoculars or a spotting scope, if you have one. For all of the beaches, go birding early to beat the crowds or just try your luck while you relax on the shore.

Hampton and Newport News Area – Closest to the breeding colony, this area is where you are most likely to see the greatest number of Fort Wool’s breeding species

Jamestown and Yorktown Area – A little further out and upriver from the Fort Wool complex, but you will still have an excellent chance of seeing its royal terns here as well as laughing gulls and other general seabird species.

While You’re At It, Help Us Keep Track of the Fort Wool Seabirds

If you happen to spot one of the Fort Wool species wearing a leg band, we want to know! You can submit your band sightings via a form on the DWR website. Photos showing the band are helpful when possible. Your observation will help us keep track of the breeding birds at the Fort Wool complex.