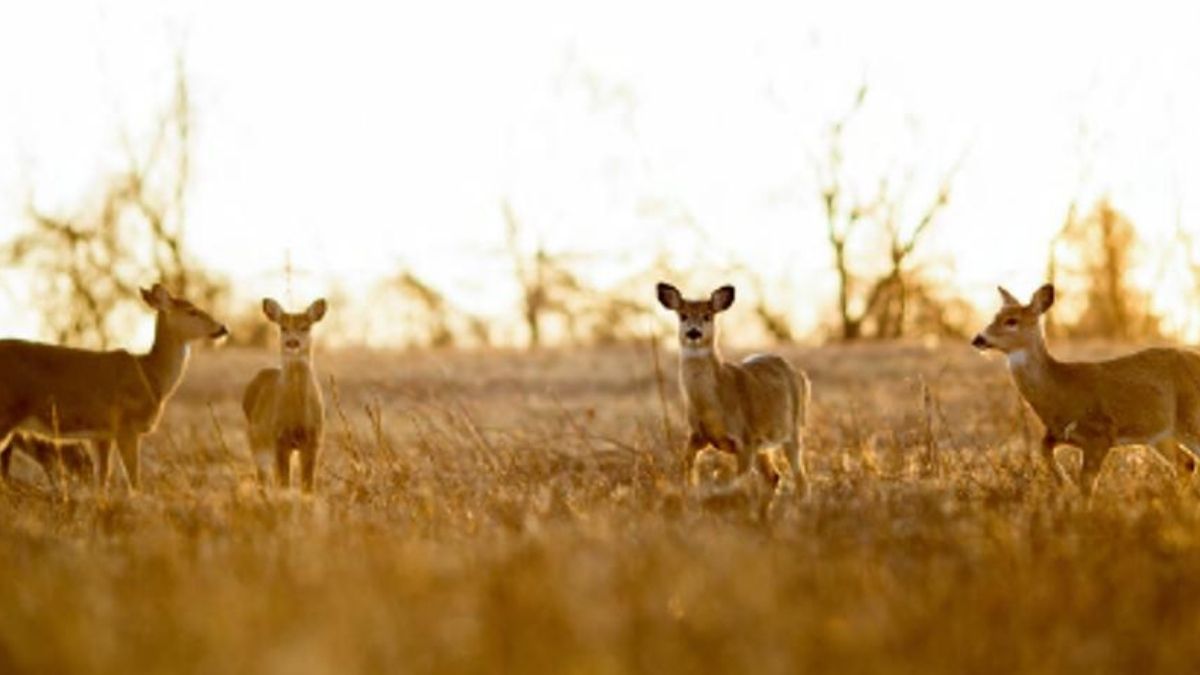 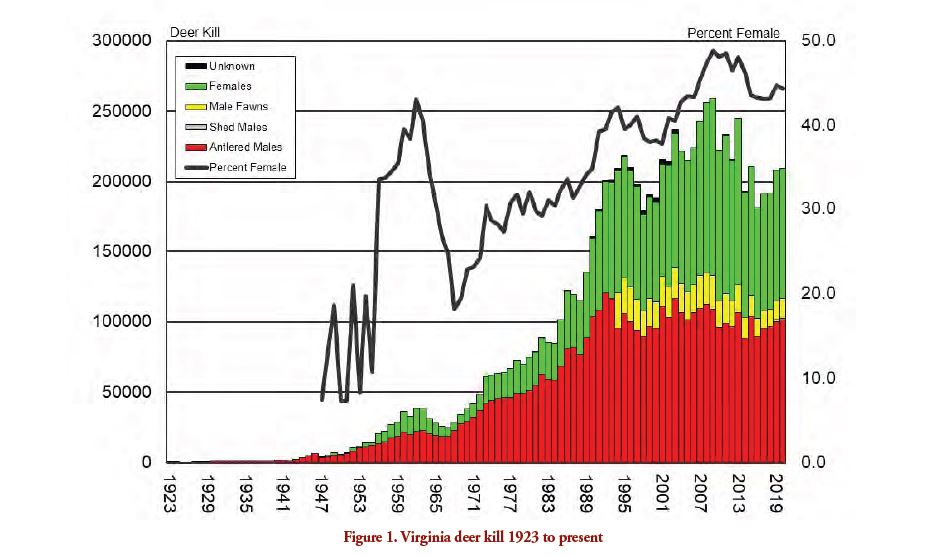 The numbers above do not include deer taken on out-of- season deer kill permits or those deer hit and killed by vehicles. Deer hunters who would like to know the annual deer kill totals by county dating back to 1947, including the county-specific 2020 totals, can find them on the Department’s website.

Deer regulations in Virginia are evaluated and amended on a biennial basis. This was a regulation year, hence there are a lot of new deer regulation changes for fall 2021 including:

Probably the biggest change for fall 2021 will be that the Department has transitioned completely to electronic reporting and will no longer distribute paper check books. Check stations that desire to do so can continue to offer electronic reporting services to hunters. All hunters (including those who are not required to purchase a license) who harvest a deer will need to report their harvest by using the GoOutdoorsVA mobile app eNotch harvest reporting system (free through the app store), logging onto the GoOutdoorsVA internet harvest reporting system, or calling (866-GOT-GAME).

The Department recognizes the values and traditions associated with game check stations and is exceptionally grateful to check station operators for their decades of service collecting data that have supported restoration of our deer, bear, and turkey populations; however, factors such as hunter convenience, efficiency of capturing data, and cost of distribution and collection of check books have driven the shift to electronic harvest reporting.

The Department remains committed to a harvest reporting system that is convenient to hunters, obtains reliable data, and maintains the public’s trust in this information of critical importance to sound deer management.

Last fall, DWR received 54 late summer and early fall HD calls from 30 counties involving 199 deer. These are not “big” numbers in terms of calls, counties, or deer. Based on the call data, HD activity was documented in Albemarle and Augusta (Deerfield Valley area) and in Fluvanna and Cumberland. The Cumberland (to the north) and Fluvanna (to the south) calls tended to be along the James River.

In April when the Department received the fall 2020 DMAP data, it clearly indicated a bigger HD year in fall 2020 than previously thought based on the low number of late summer/early fall HD calls and reports. East of the Blue Ridge, approximately 6% of the 11,500 deer examined by DMAP cooperators showed splitting or sloughing hooves on two or more feet indicative of having had HD in fall 2020. This 6% is a big number. In a typical year, approximately 1-2% of deer have splitting and sloughing hooves. In quiet years, that figure is less than or equal to 1%. HD occurs every year in Virginia at some low level.

One unique thing about fall 2020 was how warm it was. The first killing frost in Bedford County did not occur until November 17 or 18. This is about two to three weeks later than normal. Several of the HD reports received were later in the deer season and were reports of deer walking around like their feet were sore. Due to the warmer than normal fall, there may have been some later than normal HD activity.

Lastly, the best predictor for HD activity is summer drought, but this is not a perfect predictor. Many parts of Virginia had the wettest year in history in 2020.

Based on past experience, HD has the potential to have a major effect on deer herds in eastern Virginia. For more information on HD refer to the DWR website. 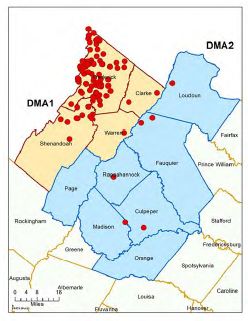 First detected in fall 2009 near the community of Gore in Frederick County on the West Virginia state border, CWD has been moving east across Frederick County and south for a decade and has now become established in the northern half of Shenandoah County. In fall 2018, CWD was detected east of I-81 for the first time. In fall 2019, two CWD deer were found in Clarke County and in fall 2020, a CWD deer was found in Warren County for the first time.

Second, in fall 2018 CWD was discovered for the first time in Culpeper County using a pilot statewide taxidermist-supported CWD surveillance strategy. To address this situation in fall 2019, a new DMA2 was established that included all of Culpeper, Madison, and Orange counties. Then, with the discovery of CWD in a taxidermist-sampled deer in the northwestern corner of Fauquier County in fall 2019, DMA2 was expanded to include seven counties: Culpeper, Fauquier, Loudoun, Madison, Orange, Page, and Rappahannock. In fall 2020, additional CWD detections were made in DMA2 in Fauquier (1), Loudoun (1), Madison (1), and Rappahannock (1) counties. Hopefully, all of the CWD detections in DMA2 represent deer that have dispersed out of DMA1.

Third, and when you think it cannot get any worse, in fall 2020 CWD was detected in a taxidermist-sampled deer from southern Montgomery County. For fall 2021, a new DMA3 will consist of Floyd, Montgomery, and Pulaski counties.

In addition to the three DMAs noted above, the Department continues to conduct annual statewide CWD surveillance using a taxidermist-supported surveillance strategy. Adult males are the sex and age class most likely to have CWD, so a taxidermist- supported approach is an efficient surveillance method. In fall 2020, approximately 2,600 samples from hunter-harvested deer were submitted by participating taxidermists. The Montgomery County CWD-positive deer was sampled as part of this effort.

In the western Frederick and northern Shenandoah area, clinically sick CWD deer (e.g., starving, staggering, with neurological symptoms) are now being found and reported. To date, four clinical CWD deer have been found. Please remember to report deer that appear sick with the following symptoms (starving, staggering, obvious neurological symptoms) from anywhere in Virginia to the Virginia Wildlife Helpline at (855) 571-9003.

Lastly, please note that mandatory CWD sampling is currently scheduled for the opening day of the firearms deer season on Saturday, November 13 2021 in Madison, Orange, and Shenandoah counties and in Floyd, Montgomery, and Pulaski counties. See the annual hunting digest for more details.

For more information on CWD go to DWR’s website.

Just over a decade ago, the Department hit the deer herds hard on private lands over much of the Tidewater region with liberal seasons and regulations. These regulations combined with three HD events in 2012, 2014 (big) and 2016 resulted in a significant decline in the Tidewater deer herd.

Since that time, regulations have been made more conservative in some areas, and deer herds and deer kill numbers across most of the Tidewater region have been recovering. If HD is not a big player in fall 2021, stable deer herds are expected across most of the Tidewater Region. Continued high human population growth rates, crop damage, and deer-vehicle collisions remain important deer management issues in Tidewater.

HD hit the southeastern half of the Southern Piedmont like a sledgehammer in fall 2014, but deer populations have recovered over the last five to six years.

Just like in Tidewater, HD can play a major role in the Southern Piedmont. As long as there is not another big HD event in this area in fall 2021, deer herds over most of this region should be relatively stable.

This is the one region where the Department continues to maintain long-term very liberal deer seasons. The female deer kill level has been fairly high in this region for well over a decade. Over most of the Northern Piedmont, the Department continues to try reducing the deer population (see Figure 3), especially in Northern Virginia (Arlington, Fairfax, Loudoun, and Prince William counties) and now also in the CWD Disease Management Area(s). NOVA currently has the longest and most liberal deer season in the United States, running eight months in length with nearly six months of firearms deer hunting and with no daily or season bag limit on antlerless deer (with purchase of bonus permits). For the most part, the ultra-liberal NOVA deer seasons have been successful in controlling deer numbers.

West of the Blue Ridge Mountains

Deer management in western Virginia has been about the same for the past couple of decades and remains two very different deer management situations.

First, deer herds on private lands over most of western Virginia have been fairly stable over the past two-plus decades (with the exception of Alleghany, Bath, and Highland counties). The last major deer management event west of the Blue Ridge that affected both private and public land was a winter mortality event back in the winter of 2010 due to deep and persistent snow. Stable deer herds are expected for the foreseeable future on private lands west of the Blue Ridge.

Second, with the obvious exception of CWD in the northern Shenandoah Valley and now Montgomery County, the biggest challenge in deer management in western Virginia over the past 20 to 30 years has been, and continues to be, the public land deer management situation. Over the past 25 plus years there has been an approximately 40% decline in the number of deer hunters on western public lands and a corresponding 66% decline in the deer kill. To address this decline, the number of either-sex deer hunting days on western public lands has been reduced significantly over the past decade or more to very conservative levels. These changes have been successful in reducing the female deer kill. The decline in the western public land deer kill has been halted, but the deer population has not recovered, to date. Regrettably, a marked improvement is not expected.

HD does not traditionally play a major role in deer management west of the Blue Ridge.

So what is the forecast for the fall 2021 deer season? A major increase or decrease in the statewide deer kill total is not expected. Over the past 29 years, the statewide annual deer kill has ranged from about 179,000 to 259,000 and averaged about 213,600.

Please support the Virginia Hunters for the Hungry program, do not feed the deer, and, most importantly, be safe.

Matt Knox is the deer project leader with the Virginia Department of Wildlife Resources.