A Year in the Life of a Cow Elk 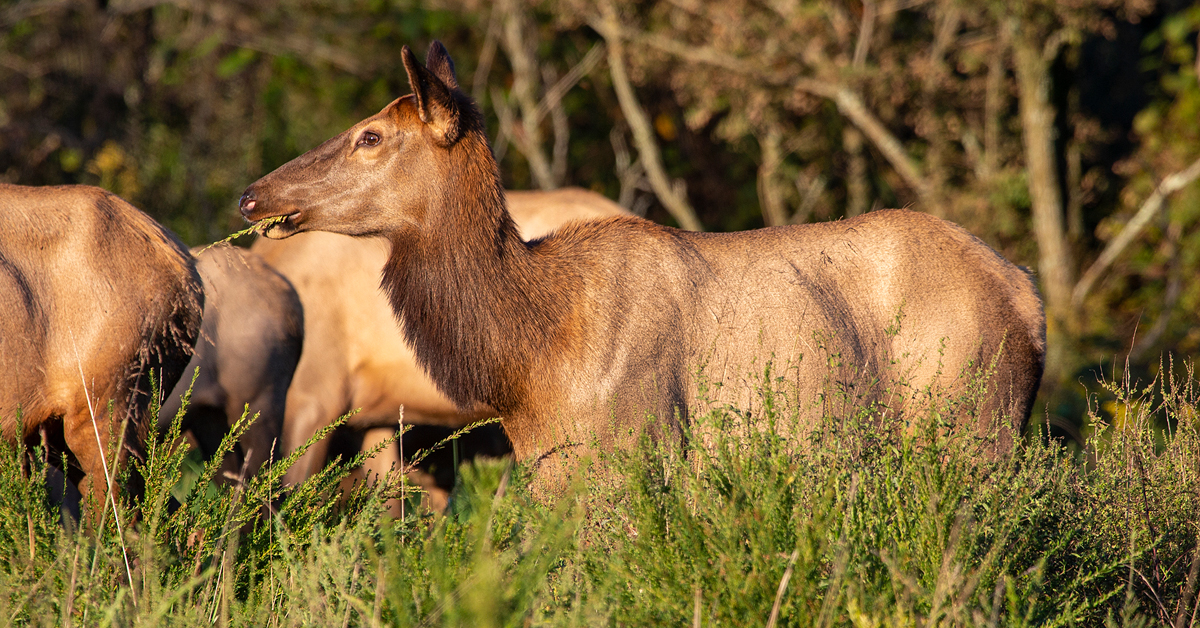 In the winter of 2013 a cow elk, her calf and the rest of her herd walked ever so cautiously into a corral. The elk had been living on the restored coal mined lands of Kentucky and had grown healthy and strong thanks to ample water and lush vegetation on these reclaimed lands. The walls of the corral were 10′ tall and covered in dark cloth, but in the center was a large pile of alfalfa hay. The treat was too tempting and they all went in. As the herd ate, one of the group tripped a wire and the door shut tight. Now captured, this herd was destined for a new home: Virginia.

Each of the 75 animals that were transported from Kentucky to Virginia as part of the Virginia Department of Game and Inland Fisheries’ elk restoration program received an extensive health examination, spent 45 to 90 days in quarantine, and were fitted with unique ear-tags and radio collars. The animals captured in Kentucky in 2013 were the last cohort destined for Virginia. Each animal received a unique color/ear-tag and our cow received blue ear-tags with the number 446. She was, and still is, an essential part of Virginia’s elk restoration program.  Adult cows are not only highly successful at getting pregnant, but as they mature, they become more adept at caring for and protecting their offspring to ensure recruitment into the herd.

Cow 446 was transported to Virginia in early spring where she spent two weeks in an acclamation pen getting used to the sounds and smells of her new Virginia home. After two weeks, she was released from the pen, but it remained there and open, allowing her to return for food and cover as she started to explore the coalfields of Virginia, and explore she must! As spring warmed into summer, cow 446 needed to find a secluded and shady area to give birth.

Calves are generally born between late May and mid-June. The timing of calving coincides with an abundance of vegetation on the landscape. Her calf was one of the first born in Virginia in more than 40 years. As 446 produced milk for her calf, she also had to try to gain the weight she lost through the last winter. It was the most energetically demanding time in her life, but with the high quality of forage available at the Virginia elk restoration zone, she found it easy to do so without needing to travel far.

Spring transitioned into summer and warmer temperatures restricted cow 446 and her calf to feeding in the early mornings and evening hours. Her calf was weaned off her milk around 110 days and then she really started to bulk up. This time of year she also sheds her pale, coarse winter coat; she now sports a rich, reddish tan coat of short hair.

By mid-summer, 446 returned to a “nursery group” with other cows and their calves.  Together, they can keep more eyes on the alert for predators. A young calf is the most vulnerable life stage for any elk; in Virginia, black bears, coyotes and even bobcats may take a calf for a meal. Fortunately for calves, elk mothers are some of the most protective of their offspring. The nursery groups will spend as much of the cool hours of the day as possible in open fields foraging on grasses and other nutritious plants. While elk are generalist, meaning they will eat a wide variety of plants, they are also selective by choosing the best available plants as well as the most nutritious and tender portions of the plants. 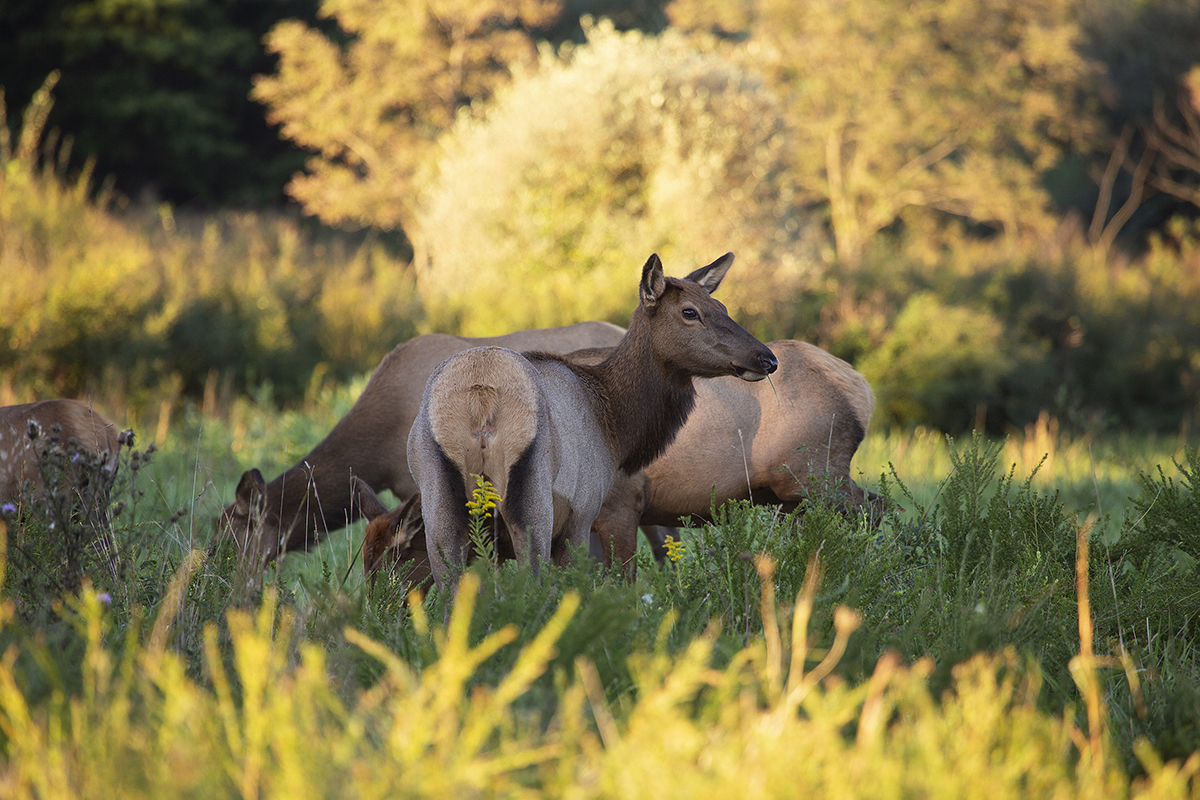 As the days of summer started to shorten, cow 446 and her calf together gained several hundred pounds. A young bull noticed her and her fellow cows. He tried to serenade them with a high-pitched bugle, but he is too early, and he is far from the top bull in the region. Bulls shed their velvet in August and, with hard antler, begin to aggressively rut for breeding opportunities with females. Cows will start to stay in the open for more hours of the day to feed and will begin to form groups of females called “harems” which are led by, and protected by a single dominant bull.

As the cows’ cycle neared breeding time, the young bulls have learned a few lessons from their dominant counterparts and some even show signs of physical injury. By the end of September and into October, most of the females have joined a harem with a dominant bull and have started their transition back into the thick warm coat of winter.

Cow 446, as a mature adult, has a 95 percent chance of conceiving another calf and will have a gestation of 255 or so days. Her calf will not breed until at least her second fall but will need to learn to care for her young; it likely takes several years before she has high recruitment success.

As the fall colors fade away, the grasses and forbs die back and there is little forage for the elk. Cow 446 and her cow harem eat what green they can find and mix in some acorns and twigs. Luckily though, an elk’s metabolism changes with the seasons and by reducing movements they can survive easily on fat reserves and what they can forage from under the light snowfall. In Virginia, the weather is mild enough that elk do not need to migrate and can live year-round in the same home range areas. 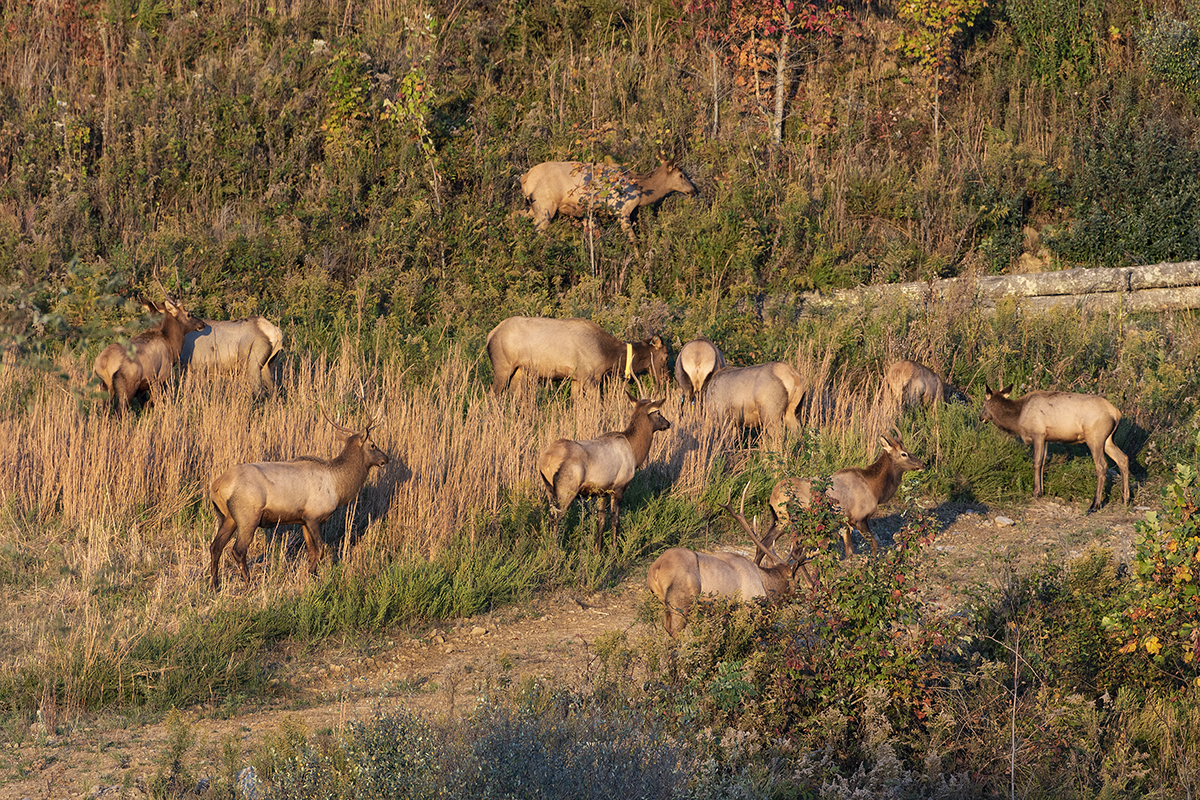 By the time this cow’s calf is nearly a year old, she will be nearly 300 lbs.—both fast enough and large enough that she will have no wild predators. There are still dangers in Virginia, cars and trains could kill her with just a glancing blow. By staying with her mother for at least another year she had a better chance of surviving as well as learning some of these dangers. With any luck she and cow 446 will live into their high teens and produce a native-born Virginia elk every year.

While bulls are still around, they will have shed their antlers by April and will start to form bachelor groups. The bachelor groups remain more secluded than cow calf groups and spend much of the day in dense cover. Late winter is the last that cow 446 sees of any males until the rut starts to pick up again in the fall. Bulls begin to grow antlers immediately after shedding the last year’s and within four short months can grow several hundred inches of bone.

For three years cow 446 wore a radio collar from her release into Virginia, providing data about home range and habitat use, her calving habitat selection, and survival. In 2017 the collar broke off as it was scheduled to and was collected by DGIF biologists. 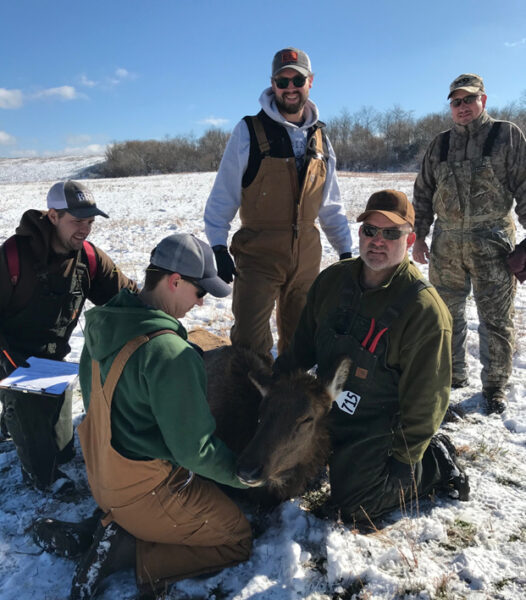 The cow elk with DGIF biologists and her new #715 tag. Photo by David Kalb

In the winter of 2019, biologists once again captured cow 446, this time with a dart gun. During her capture, biologists concluded that she was still in great health. The drug sedated her for just a few minutes and then she was back up and moving with the elk in her herd. As she rejoined the harem, cow 446 had a new collar, and new ear tags! She is now known as cow 715 and her new collar should provide DGIF biologists with another four years of data.

Find out more about DGIF’s elk restoration project. Did you know you can watch for the elk herd live on Elk Cam? Another great read is “The Reigning King of the Southwest.”