The Reigning King of the Southwest 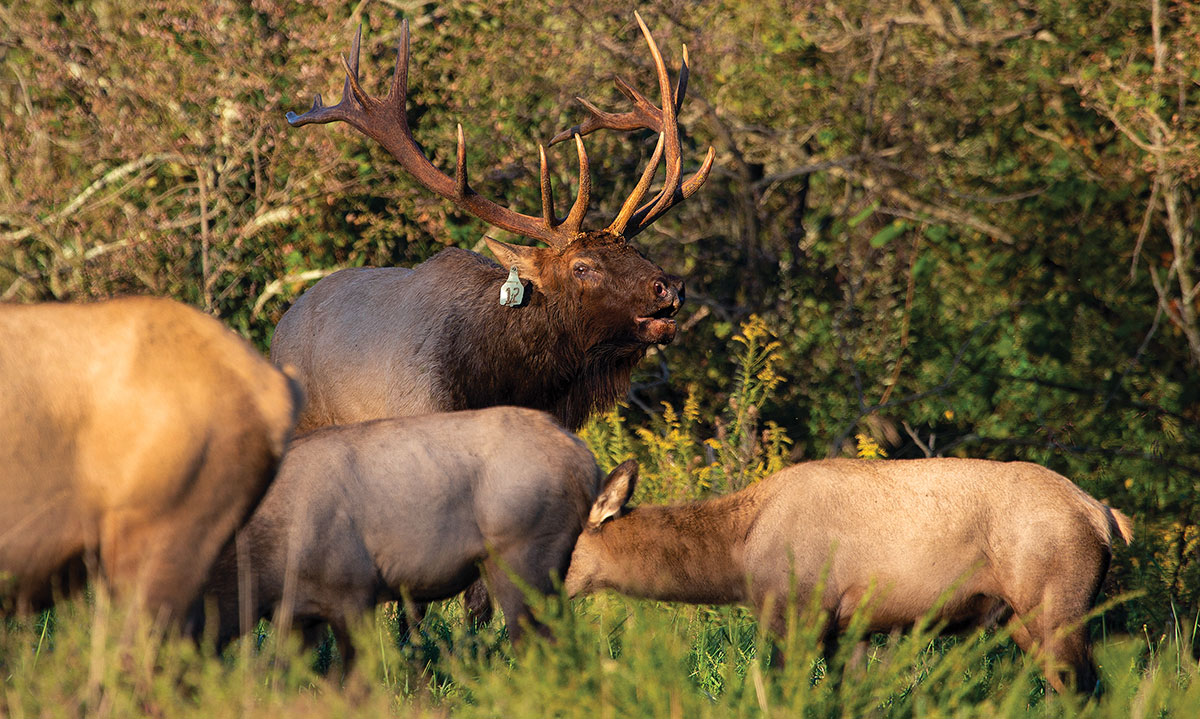 More than any other species that has inhabited Virginia, elk tend to inspire an awe that leaves us breathless. The crowning antlers of a mature bull moving through a harem of cows creates little doubt about who is in charge. You can feel the sound of his bugle echoing through the valley. Guests that I take to tour the original elk release site in southwest Virginia always have their phones at hand, rapidly capturing the moments, forgetting about time and work.

Many Americans would agree that we are losing our connection with nature and that it is an unfortunate occurrence. A 2018 survey conducted by Keller and colleagues of over 12,000 people nation­wide found that 87 percent of Americans believe an understanding of nature is as important as reading, writing, and math, and that being outdoors is vital for both physical and mental health. These same participants are spending only six to nine hours a week outdoors, compared to some 13 to 19 hours in front of a television or other digital device.

To this I say: Bring your kids, friends, and family, and come see and hear the elk! You will likely find yourself loving the experience, immersed in southwest Virginia’s wonderland. 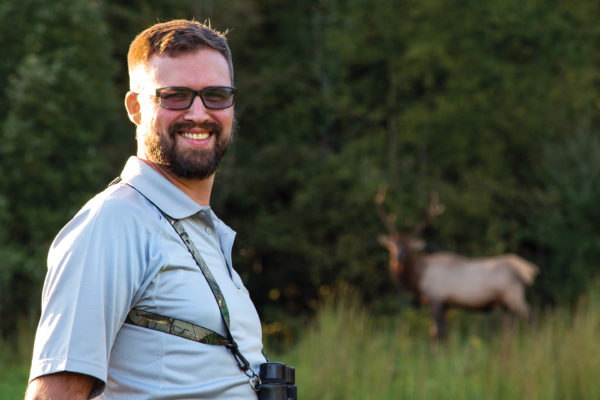 For three years, David Kalb has been working for DGIF overseeing the growing elk herd.

The big bull we are watching today is amazing to observe, as he is showing off for his mates. He is constantly circling to keep them close as they eat. He will tend to his females daily, ensuring he passes on his genes. When necessary, he will defend them aggressively against other bulls that may want to intrude. This impressive an­imal will lose about 20 percent of his body weight from September to November, because during this time of year mating success is more important than eating. To make it through the season, this elk will need to manage his energy reserves effectively.

The goals of Virginia’s Elk Management Plan directly reflect the Department’s (DGIF) mission to conserve wildlife, connect people to wildlife, and protect against wildlife-re­lated conflicts. As a newly restored species, elk will require some specific and unique care for their conservation.

They have an unparalleled ability to connect people to wildlife. Elk bugling, for example, draws a great deal of attention! Unfortunately, elk also have the potential to cause conflicts with humans if they are not managed properly, and the DGIF will be vigilant in trying to mitigate and prevent such conflicts. 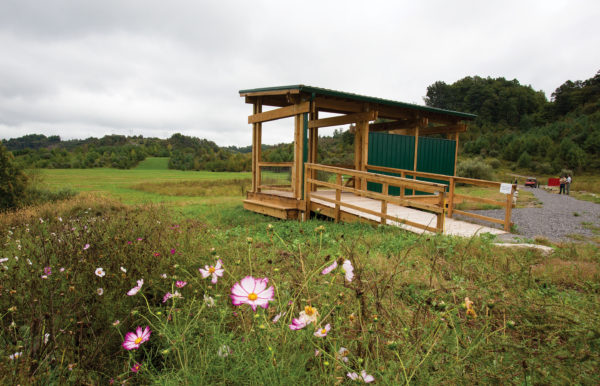 Public areas like this one offer comfortable and accessible viewing platforms to observe elk and other wildlife. Construction and materials for these structures were donated by local Rocky Mountain Elk Foundation members, volunteers, and Noah Horn Well Drilling.

Elk viewing and related tourism activity associated with wildlife watching are hopeful outcomes of the elk resto­ration that took place four years ago. In Virginia’s most southwestern counties, where coal was once king, there is a need and a hope for an additional eco­nomic boost. Previous elk restorations throughout states east of the Mississippi River from Pennsylvania to Wisconsin, and south through the Great Smoky Mountains, have become destination sites for tourists because of growing elk herds. Folks who desired a trip west to hear one of nature’s greatest mating pleas are now able to make a day trip within their own state or a neighboring one.

To facilitate these opportunities, Vir­ginia now has public viewing platforms established on the Spearhead ATV Trail at Poplar Gap Park in Vansant. These platforms overlook unique habitat in far southwest Virginia: open fields. Early suc­cessional habitats have historically been a rare commodity, but due to reclamation efforts on previous coal mining sites, the elk now have exactly what they need to thrive.

For those who cannot travel to the far reaches of Virginia, the Department has been working with several sponsors to es­tablish a live broadcast of some hotspots within the elk range. The public can access the broadcast anytime from the Department’s website. Because of the quality of this restored landscape, other wildlife such as black bear, white-tailed deer, turkey, and small game are prevalent in these areas as well.

I know that by the end of the mating season our bull will look tired and sluggish, but right now he is slick and muscular, a lean 900 pounds—the new king of his domain. Herd health has been, and still is, a critical component of elk management. The DGIF tests each elk it can sample for diseases that could be detrimental to cattle and other wildlife. This process will continue as hunting season begins within the Elk Management Zone (EMZ) of Buchanan, Dickenson, and Wise counties. While elk can be harvested on a license holder’s deer tag outside of these counties, no one has done so in over four years. Several people have passed on an opportunity, while others have tried in vain to find an elk within the neighboring counties of Lee, Scott, Russell, and Tazewell.

Elk hunting is, of course, a highly anticipated goal of the restoration plan. Unlike Virginia’s previous efforts of the early 1900s, we will be patient. Planning an open hunting season for a properly designed harvest regime, at the proper time, when our elk herd is large enough to handle additional mortality, will ensure that future sportsmen can enjoy this pur­suit. If you are lucky enough to harvest an elk, your reward will be 200 or more pounds of low-fat, high-protein, organic meat with a sweeter and more delicate taste compared to traditional white-tailed venison (elk meat is still venison in name). The work of cutting and packing an elk out of the woods exemplifies the truest definition of earning your meal.

Restoration is not all positive, how­ever. There are also some costs. Elk have the potential to cause vehicle collisions more severe than deer strikes. Elk can damage agricultural crops as well, destroy gardens and fences, consume stored hay, and potentially transmit diseases if an out­break occurs. The Department is taking this program slowly so we can learn about how Virginia elk interact with residents and how we, as an agency, can foresee and help mitigate conflicts. Generally, we’ve had few issues reported—primarily because of an abundance of habitat work where the elk currently reside.

Despite being native to Virginia, there is still a lot that we do not know about these charismatic creatures. Many questions still need answers. As DGIF focuses on addressing the opportuni­ties and challenges associated with elk restoration, we plan to learn as much as possible to ensure the future is positive both for the animals and for the people who call southwest Virginia home.

Each time I observe these animals, it is hard for me to believe that a 900-pound bull and 25 cows can disappear like the mist that rolls through the valley as the morning sun rises. In the past, I have tried to keep up with the herd to take one last picture, but my attempt is useless. The animals are native to these hills and instinctively cover the terrain effortlessly.

Those of us at the release site this morning give the elk privacy to continue their day in the shade until the cool evening hours, but we are not quiet. With the animals out of sight, the conversation returns to a normal volume and centers on our gracious hosts, the bull elk and his harem that have shared a glimpse of their majestic fall ritual with us. As we leave, the bull bugles one last time, fueling a new outdoor passion for all within earshot. No doubt, his natural charisma will lure us to return to the outdoors to witness that magnificence once again.