Adding to the K9 Capabilities 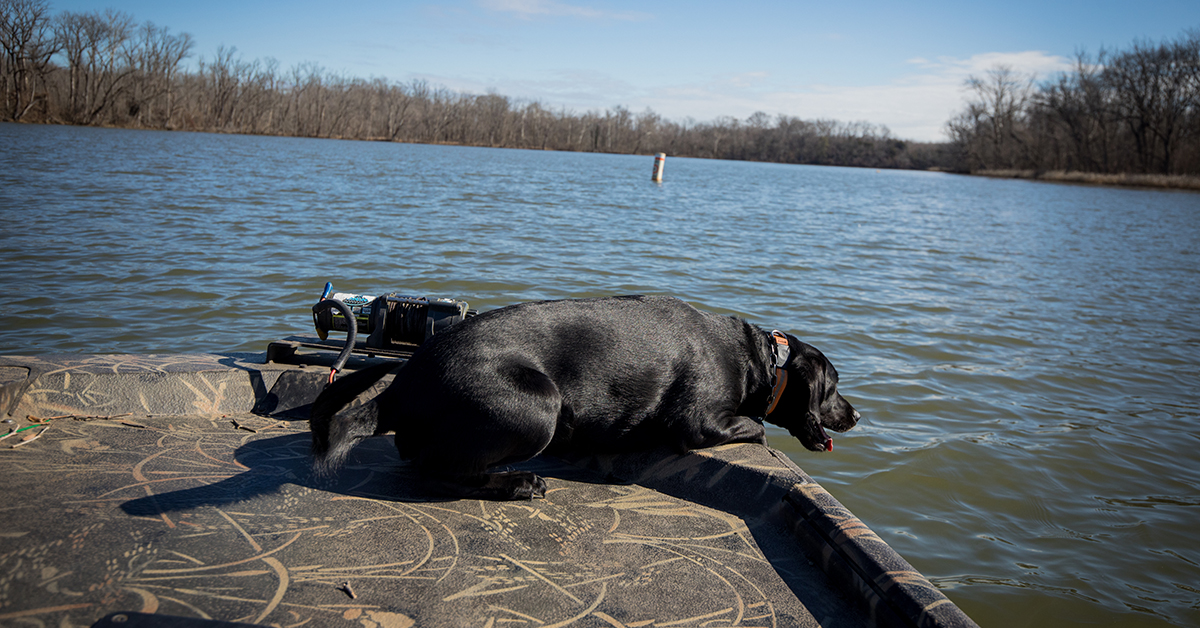 K9 Bailey working on scenting over the water.

Given that DWR CPOS are the lead agency for investigating fatal boating accidents, adding human remain detection to the K9 capabilities made sense. “We really saw a need for it,” said Billings. “There aren’t many law enforcement agencies across the Commonwealth that have human remains detection dogs. We’re going to specialize on the water portion of it, due to our responsibility and our enforcement in boat accident investigation. In responding to boat accident fatalities with a K9 trained in human remains detection, we can speed up the process of finding victims and having closure for the families. It will also facilitate things for the officer who is investigating. We’re normally the first ones on the scene, and this is also a great tool to offer to search and rescue, to Virginia Marine Resources Commission (VMRC), or other state, local, or federal agencies.” 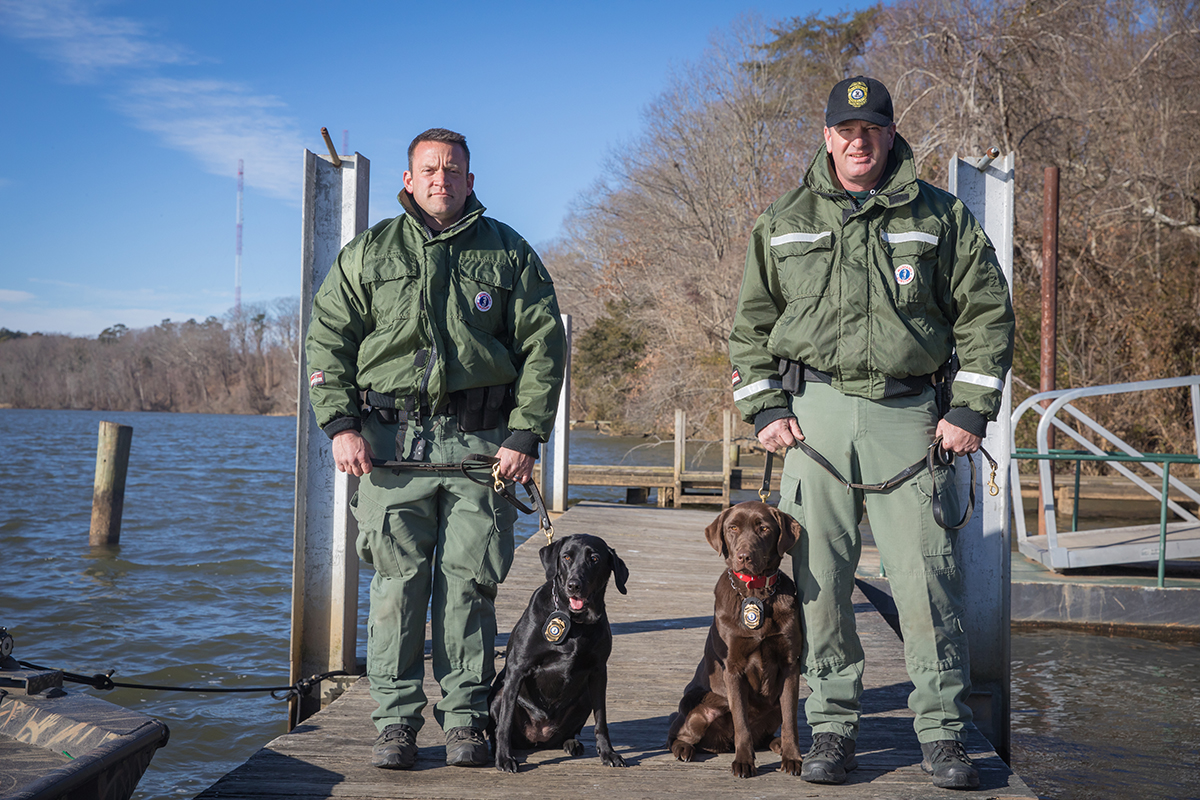 The majority of human remains detection dogs in the state at the moment are handled by volunteers through search and rescue groups. Having a state agency with HRD-trained dogs available on call 24/7 is a benefit in terms of response time and capability. “The ability to respond immediately is a benefit,” said Nina Cipriani, an experienced K9 trainer and K9 search-and-rescue volunteer who has been assisting Billings and Patrillo with training. “Being on the water is what they do, and we get a lot of water calls in the summer, so it only makes sense for an agency that’s already at most of the waterways to have this capability. I think what they’ll provide the state is going to be an exemplary resource.”

DWR currently has nine K9 dog-handler pairs working throughout the state. Patrillo’s partner, K9 Bailey, is a veteran of the program, while Billings’ partner K9 Molly completed her K9 training and certification in 2020, taking over for Billings’ now-retired K9 partner, Josie. Both dogs have solid article-search training and are able to find guns, shell casings, and wildlife remains adeptly.

Billings and Patrillo have been meeting on a regular basis to train their dogs in the advanced human remains detection skills. HRD dogs need to train and be certified in three disciplines—on land, buried on land, and in water. K9s Molly and Bailey will work toward their on-land and buried-on-land certification, but Billings and Patrillo are currently focusing on in-water training primarily. 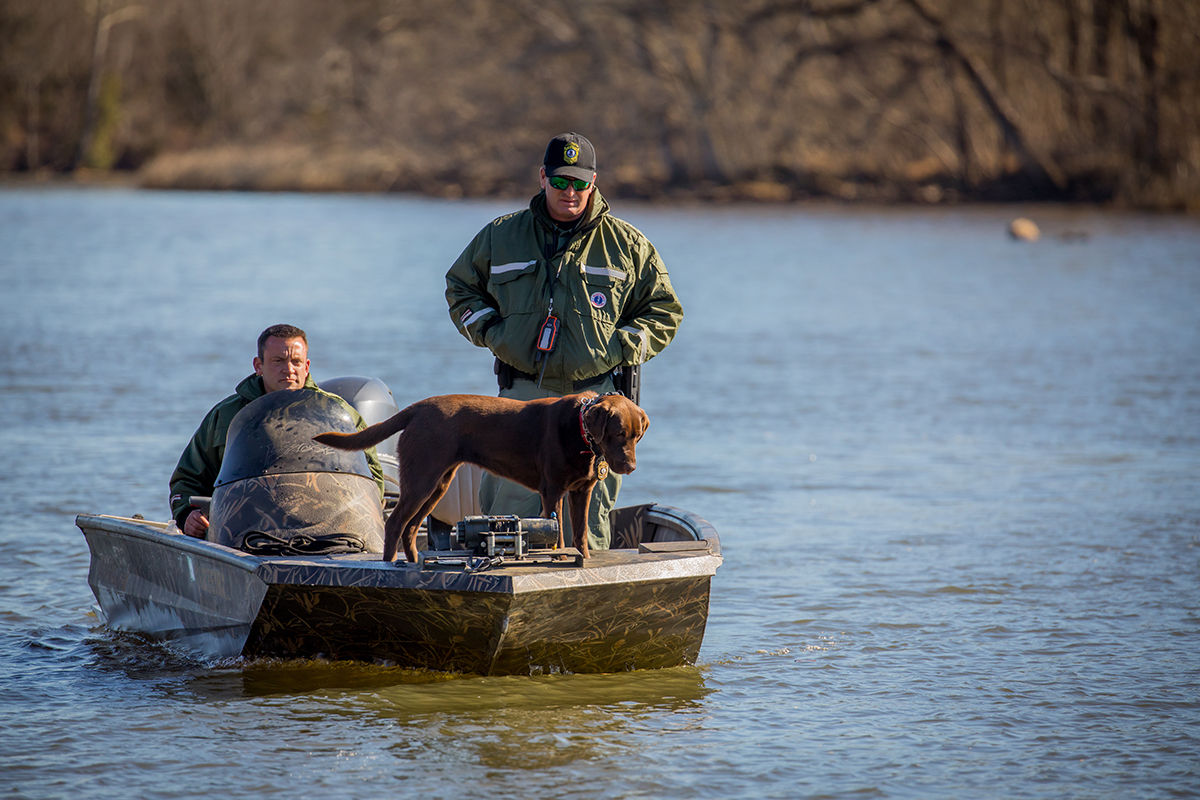 K9 Molly works at scenting over the water as her handler, Senior CPO Wes Billings (right) looks on and CPO James Patrillo drives the boat.

“We’re setting remains under the water, sometimes 20 feet deep,” Billings said. “We’re suspending remains odor up in a water column that’s eight feet under the surface. It’s amazing that you can put a dog on a boat and they can smell that.” The dogs stand or crouch in the bow of the boat, smelling the water as the boat slowly proceeds. When they sense human remains scent, they alert. K9 Molly lies down and looks at Billings; K9 Bailey barks. 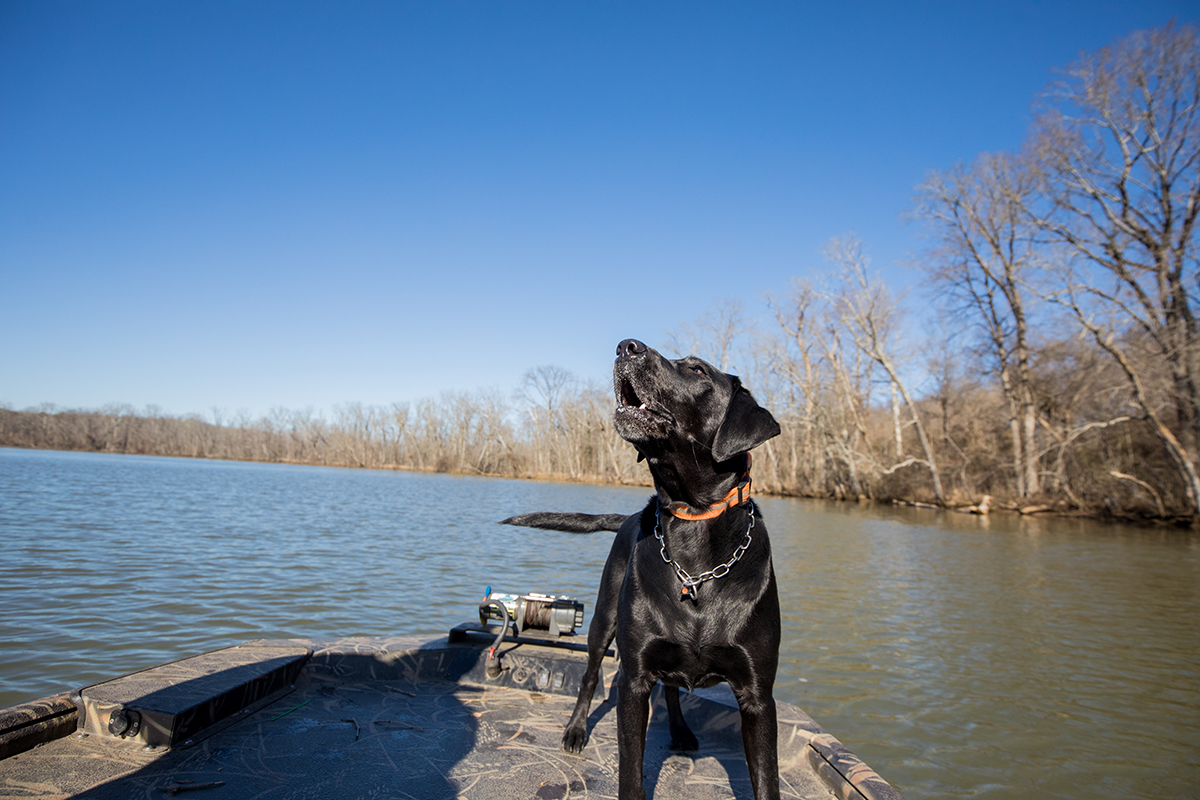 K9 Bailey alerting to scent in the water.

“We’re teaching the dog to go against everything they’ve learned before, because if we’re looking for a gun, we want the dog to go to the gun and show us exactly where the gun is,” Billings said. “If there’s a body 20 feet under the water, the dog can’t go to the body, so the dog has to get to the strongest odor it can find, then show us where that is. At that point, we start triangulating those points with a GPS—marking places where the dog shows interest—until we can narrow it down to a six-to-20-foot area.”

The work of scenting over water is strenuous, so ideally Bailey and Molly can work as a team, with one dog working while the other dog rests. Billings noted that the teams are hoping to have a boat dedicated to the HRD work, with a trolling motor and advanced sonar and GPS capability. “[Patrillo] and I will eventually respond to calls together, so one of us can drive the boat and that dog can rest while the other dog works, and we’ll switch back and forth,” Billings said. 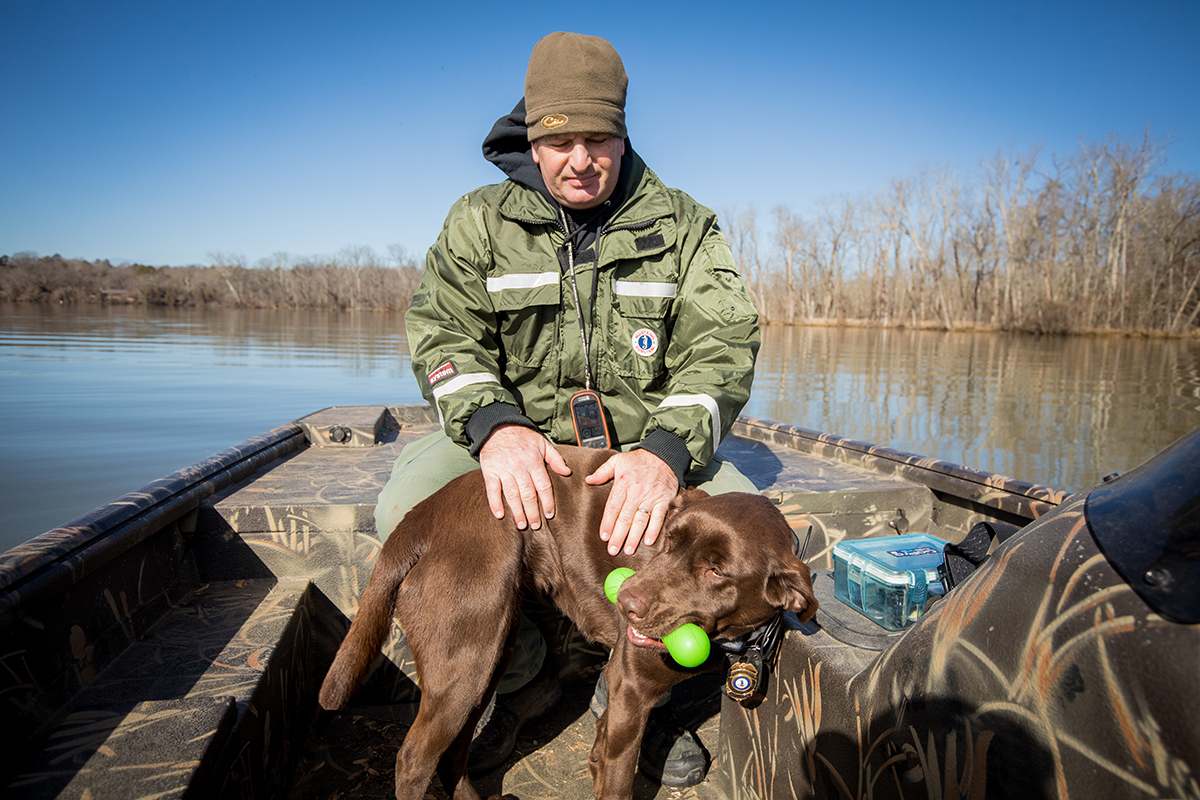 After the K9s finish their scenting work successfully, they get rewarded with play, just as they do for their usual article searches.

Cipriani has been impressed with the skills and dedication Patrillo and Billings have shown. “They’re so receptive to any type of training. Those guys are so dedicated to their dogs,” she said. “You can have a good dog and a good handler, but a great team happens when the handler understands the strengths and weaknesses of their dog, and that’s what makes [Billings and Patrillo] above average. They know what they do best, they know what their strengths and weaknesses are, and they can work their dogs to be able to do their best.

“Something that has impressed me about DWR,” Cipriani continued, “is that they recognize that these K9s are crucial. DWR is placing a lot of resources into their K9 teams, and having well-trained K9s and handlers peppered throughout the state is definitely a major benefit to the agency and to the people of Virginia.”

If you’re interested in helping to support the K9s of DWR—Molly, Bailey, Avery, Lily, Bruno, Grace, Reese, and Waylon—you can make a tax-deductible donation to the program through the Ward Burton Wildlife Foundation’s fund. Your donation will go toward veterinary care, training, and equipment needs for the K9s. 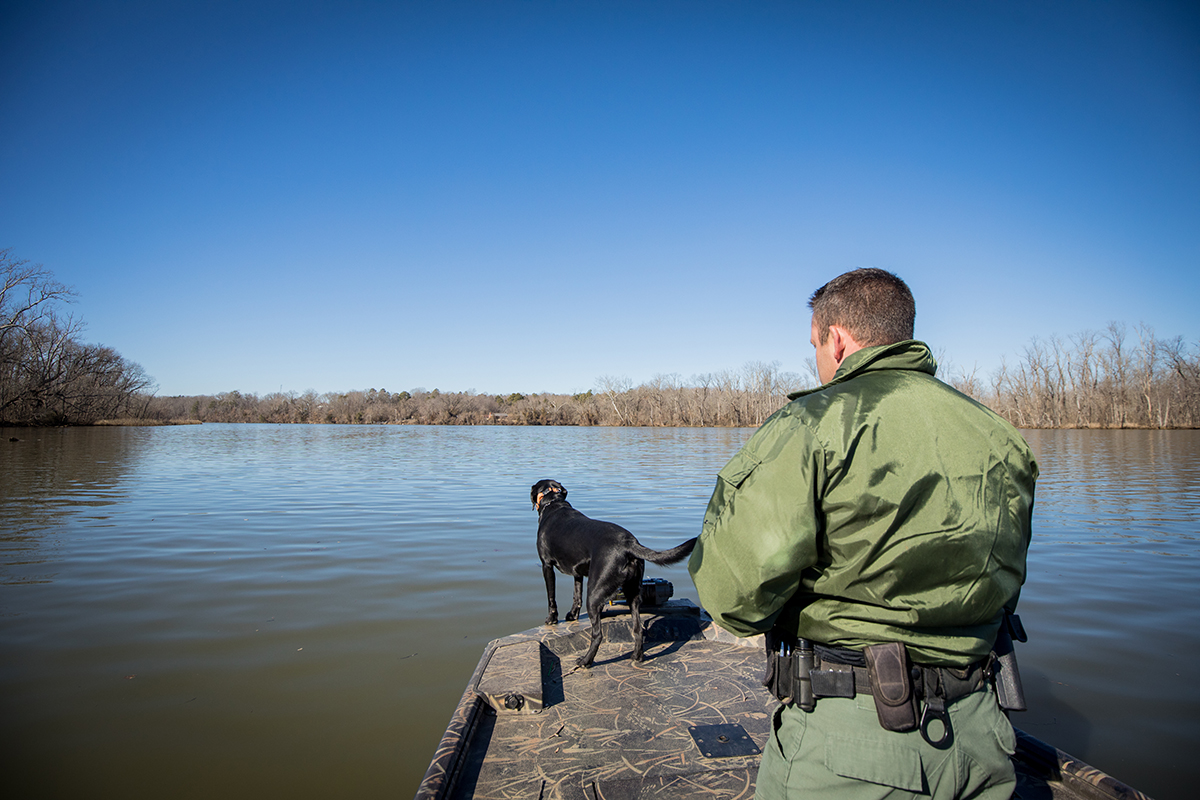 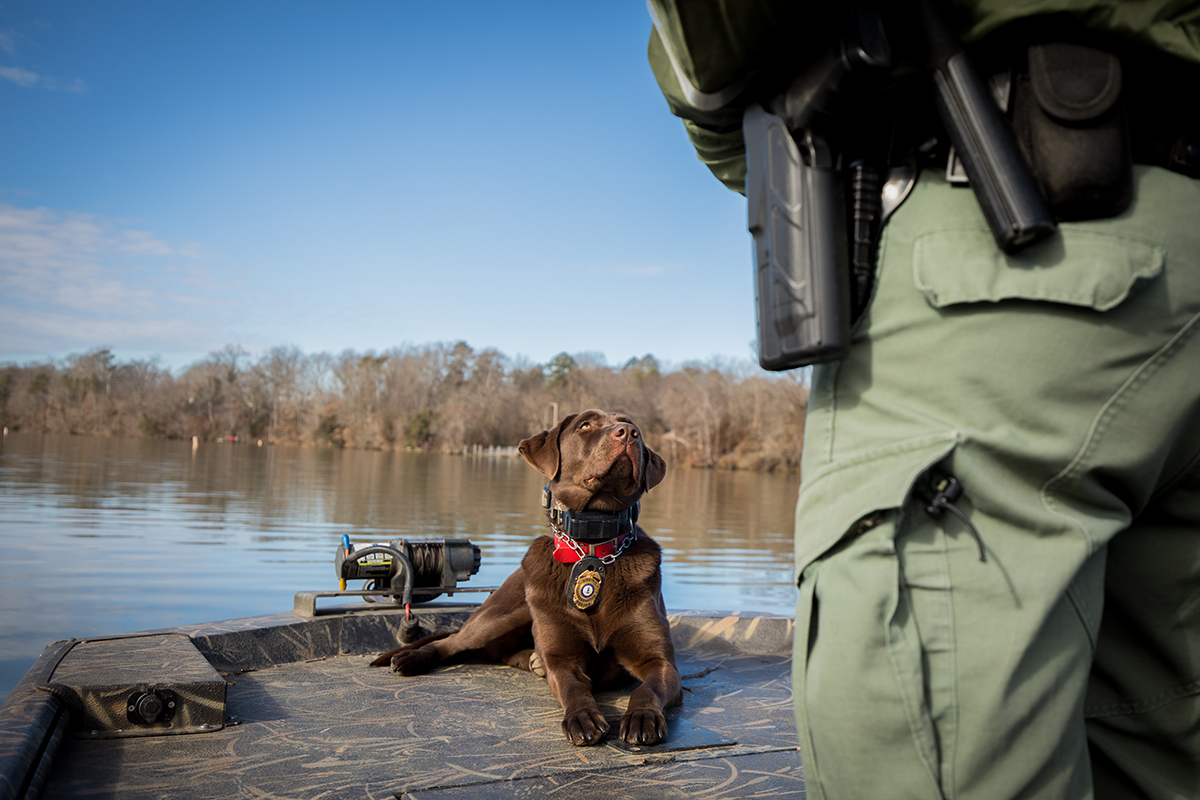 K9 Molly alerts to scent by lying down and looking at handler Senior CPO Wes Billings. 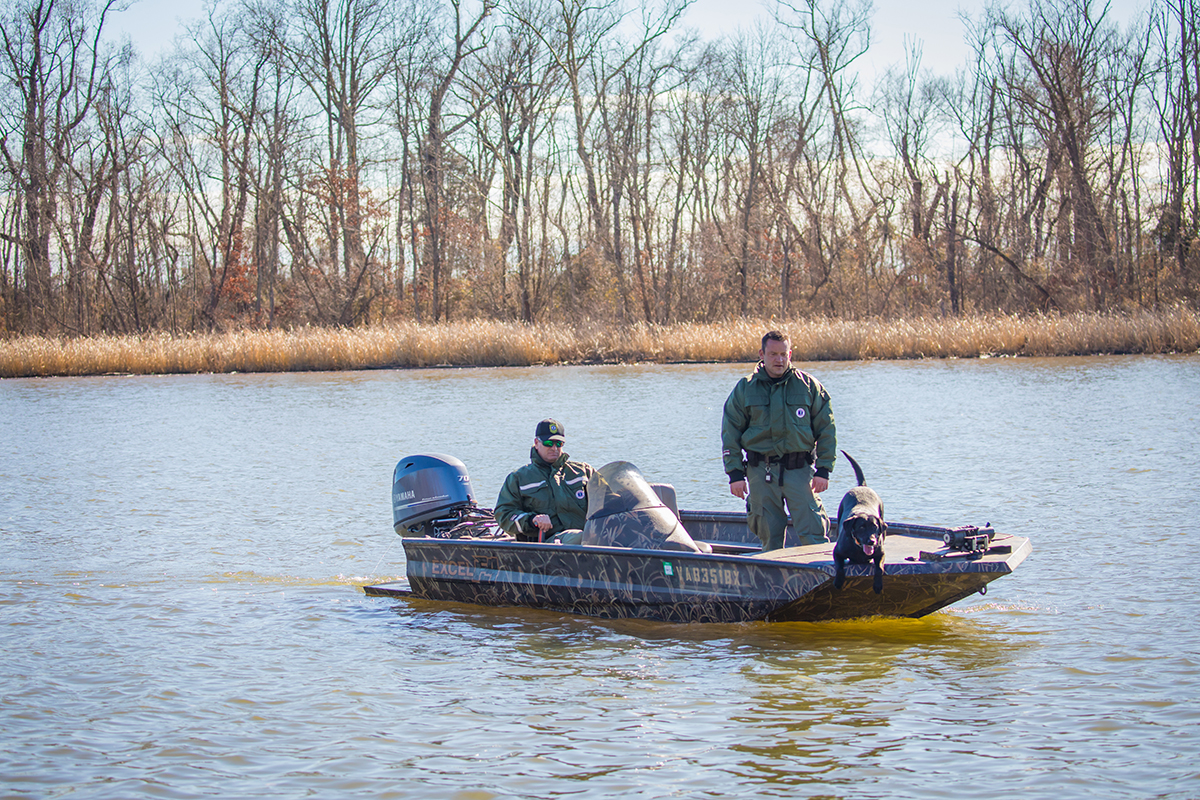