Amy Barr Enjoys the Art of the Hunt 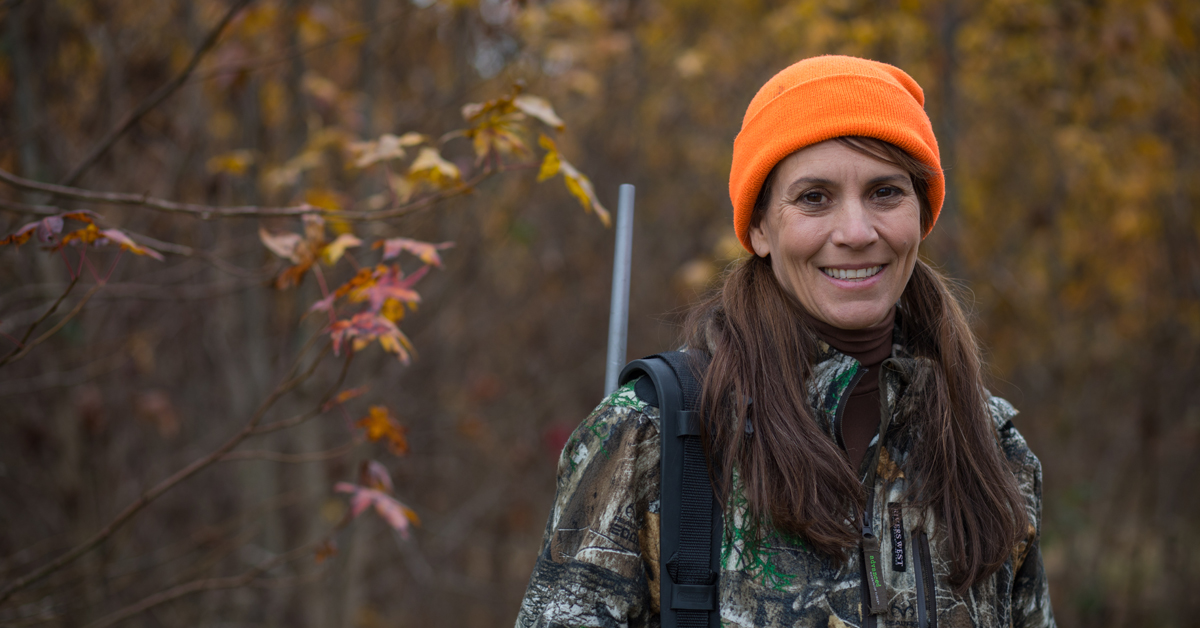 Amy Barr ready for a hunt.

“I like to walk in the dark,” Amy Barr says with a smile in her voice. “I like to see how quiet I can be.”

The stars wheeling in their nightly compass may well signify that this hunter is on the right path. The circle is a sacred symbol to Native Americans, and for Barr, an artist who lives and breathes primitive art, this new day, this quiet, this sky, are good.

Later in the brightening morning, after the world wakes up, when dew drops from burnt-orange leaves up high in the treetops, a big eight-point buck wanders in close. The artist could not have imagined or painted a more perfect scene. Finger on the trigger, Barr completes the circle of the hunt, one she describes as “the journey of a lifetime.”

Returning to her rustic home overlooking the Appomattox River, the landscape is different. Her world is a whirlwind—her son has soccer practice and her daughter, dance. There are half-finished oil canvasses propped on stands in the art studio that require finishing touches, chickens and goats to tend to in the yard, and classes to prepare for her job as an art teacher. In her scarce “free” time, Barr keeps a forge for blacksmithing, and is exploring the art of working molten metal on her anvil. She’s into waterskiing and mountain biking, among other sports. She throws herself into each activity with amazing energy. 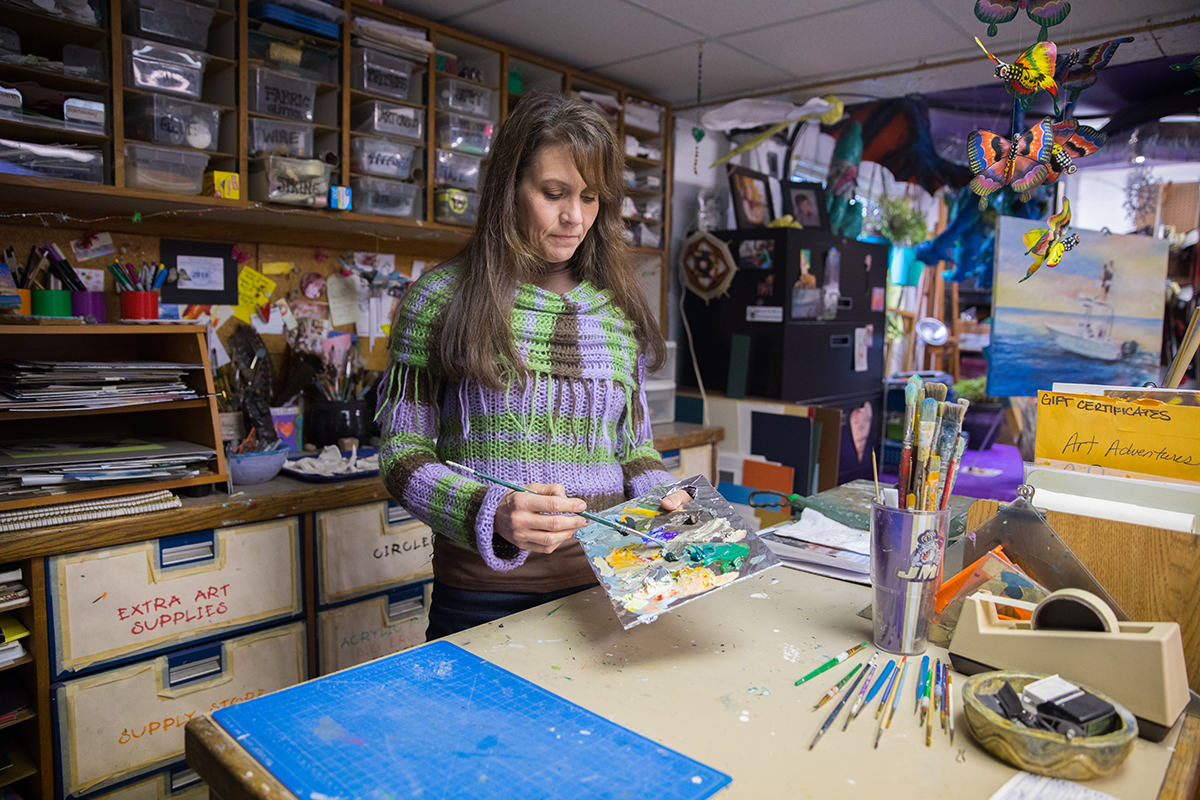 Amy Barr prepares to work on a painting in her studio.

“I’m a busy person. If I sit for more than two minutes, it’s like I’ve got to get up and do something,” she says. But this artist, business owner, and single mom long ago found the perfect counter balance for a busy life.

“The world drops away from me,” Barr said. “It all just melts away. There’s something magical that happens to me when I’m in the woods. I can sit for hours—hours!—and not move.”

A few years ago at the age of 40, Barr decided it was time to delve further into her passion for self-reliant living. She decided to teach herself how to hunt. Her interest in primitive lore and local food sourcing, as well as her love of the outdoors all seemed to be leading her to it. It was something she’d always had the desire to try. But growing up without hunters in her family, there would be hurdles to overcome. At the time, she recalled, “I didn’t know the difference between a rifle and a shotgun.”

In need of guidance, she turned to life-long hunter Judge Charlton, who agreed to mentor her. He taught Barr the fundamentals of firearms, how to chamber a round, and to sharpen her skills in order to dispatch an animal with precision and accuracy. In the field, he stepped in when she needed help, but both Barr and Charlton agreed she would learn best by experiencing the hunt on her own.

Dave Warren, also a seasoned hunter, helped polish her shotgun shooting skills with hours of practice on the skeet field. Other sportsmen also offered advice and welcomed the new-comer into the hunting community. Having knowledgeable, ethical hunters in her corner was essential, but Barr wasn’t afraid to jump into her new passion alone.

Charlton was hunting nearby and had just killed a deer himself. True to his word and teaching style, he used his deer to instruct Barr, who field dressed and then butchered her first deer that day. She was fascinated with the process, and hooked on hunting.

Getting that first deer was the culmination of “hours upon hours” learning to track, shoot, and be safe in the woods. Barr spent days watching mannerisms and learning patterns of deer and other wildlife before ever carrying a gun afield. Her kids enjoyed getting up close and personal with nature by learning to follow deer tracks alongside mom in their wooded backyard. They sat with her on wildlife watching trips and joined her on hunts.

What was her biggest impediment as a beginning hunter? Not having warm gear. She spent a few uncomfortably cold mornings before finding appropriate clothing for Virginia’s unpredictable weather.

Having put in the time to become an accomplished, ethical hunter, over the years she would go on to harvest more deer, and branch out into duck and turkey hunting. She says being successful and get-ting game is great, but hunting has given her something else, something that completes her as a person.

“I sit in the absolute quiet, surrounded by nature. And for me, nature is art,” Barr said. “It’s perfect stillness. No meditation, no yoga, compares to sitting in the woods. And that floors my girlfriends because that’s not how hunting is normally explained when someone is talking about getting their big buck.” 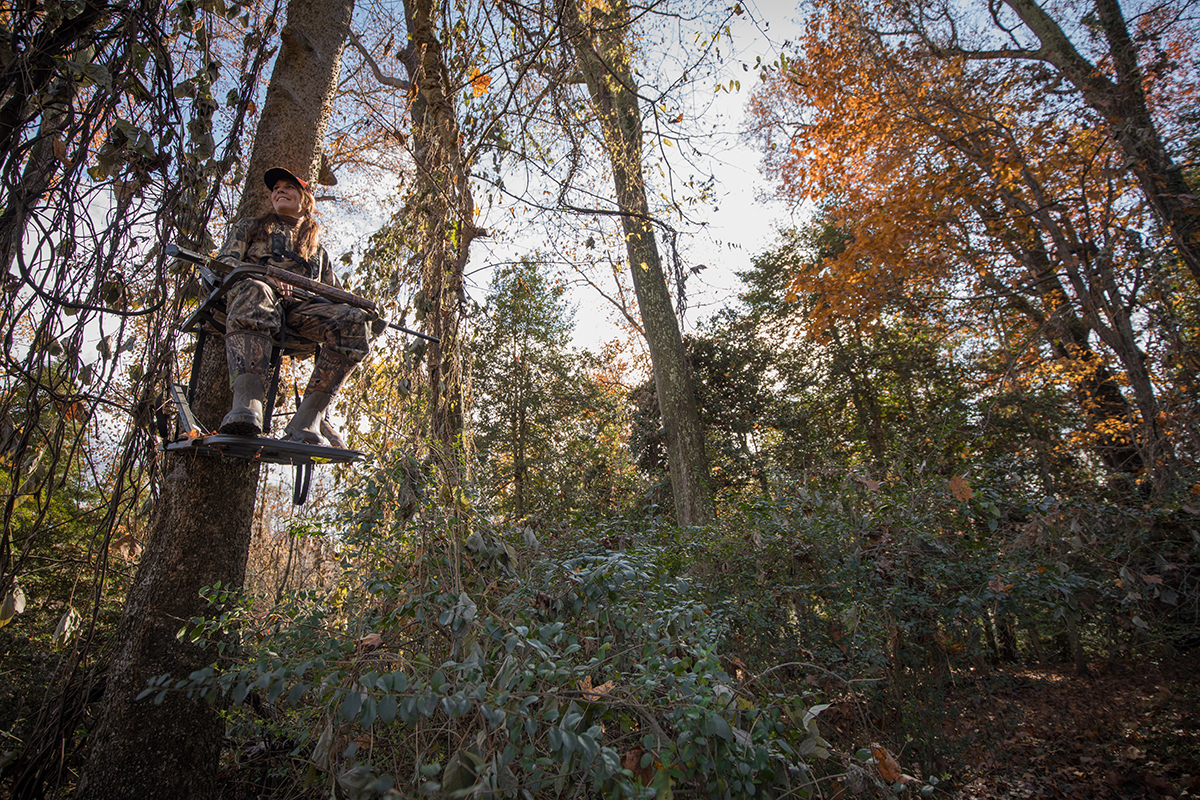 Amy Barr watches for deer from a tree stand.

Women in the Woods

Barr says her friends don’t understand hunting, “because they came from and are still in the same background I was—they can’t imagine taking an animal.” But she says talking to them creates curiosity and intrigue about the experience.

Barr wishes she “could give them the gift of perfect stillness,” that she experiences in nature, something she believes has great appeal, and is almost “a secret” that only those that hunt know about. She believes more women, in particular, would be drawn to hunting if they knew more about the new world of quiet she discovered in the woods.

It’s no secret that for the past decade, the number of women hunters has been growing. Barr approves of the trend, saying there’s no reason for women to be hesitant about hunting if they have the desire to try it.

“A generation ago there was this stigma about what a man does, and what a women does, but that’s changing,” she said. “I think women are finding their own place in the woods and families are getting out and doing it together, finding joy in that companionship. There’s no difference between men and women in hunting. Women have every bit the skill that a man has. And if you’re drawn to it, you can do it.”

The healthy, lean venison is the number one reason Barr wanted to try hunting. Both she and her children love it, and it fits in with her locavore ethic of having a big garden, getting fresh eggs from her hens, and foraging for wild edibles. When she takes an animal, she uses as much of it as possible, including the hide and sinew for traditional Native American art projects. Knowing where the venison came from and getting it herself is what it’s all about for her.

“When I go to the grocery store, pay for stuff, bring it home and cook it—that doesn’t hold a candle to tracking, finding, harvesting and then bringing wild game home and putting it on the table,” she said. “My kids announce, ‘This is the deer that mom shot!’ There is a huge sense of pride.” It’s evident that Barr’s journey to become a hunter, one she describes as a “full-hearted experience,” has changed her life, and given her a great sense of fulfillment.

“I love being in the woods,” she said. “I have a desire to stay connected, to be connected to not just the earth but also every-thing around me. That’s the draw for me. And hunting is just a part of that. Hunting is what completes the circle and brings it all together.”

Ron Messina is the video production manager for the Department of Wildlife Resources and an avid hunter.