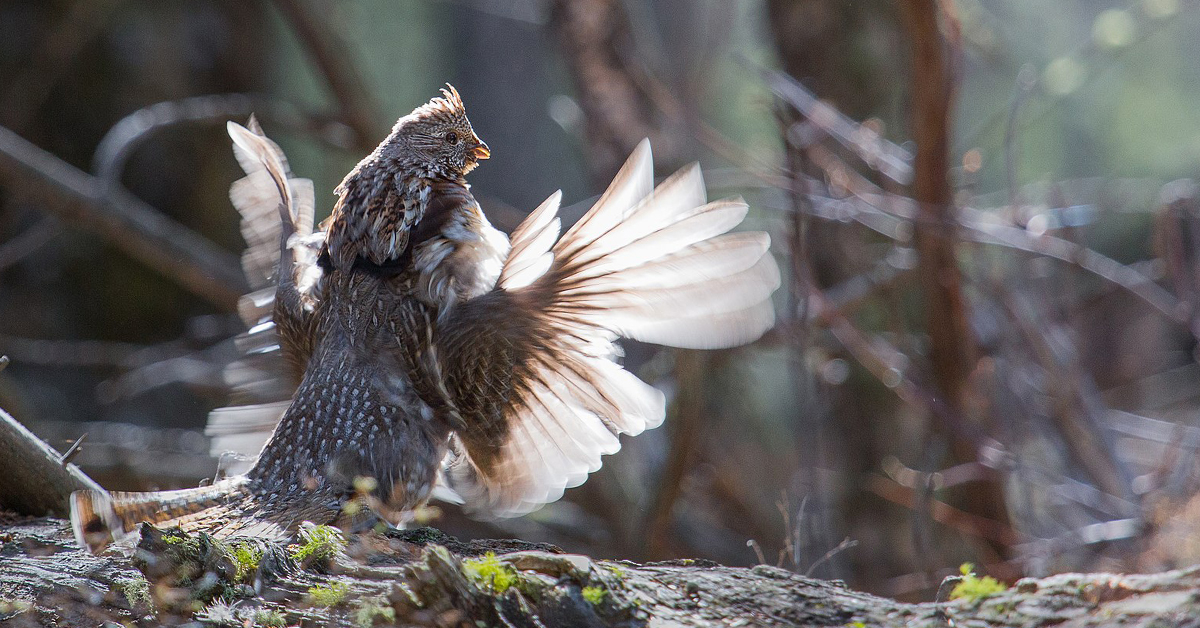 Experienced upland hunters consider the ruffed grouse the most challenging game bird of all. From years of pursuing this beautiful brown, russet and black bird, I can vouch for that. If there’s a way a grouse can flush just when you don’t expect it, get a tree between you and the shot pattern, or veer up, left, right, or down as you squeeze the trigger, this amazing bird will do it.

And that’s not to mention living in some of the roughest, steepest, briar-infested mountain country imaginable—almost as if to challenge our fitness, stamina, and will to pursue it. But when all the hours of walking, flushes heard but not seen, and missed shots culminate in the successful harvest of a grouse, the hard effort will seem worthwhile. And even on those days when you trek tired and sore-legged back to the truck without a bulge in your game pouch, the thrill of pursuing this wary bird that seems to symbolize wildness will still bring a warm glow of satisfaction.

One of the best ways to improve your odds of at least occasionally bagging a grouse is to avoid making mistakes. I feel well qualified to write on this topic. Over many years of chasing grouse in Virginia’s foothills and mountains I have probably made every mistake possible, some of them many times over.

But gradually I began to learn from those mistakes. And as I did, I saw my flushing and bagging rates go up and also my enjoyment of the sport.

I could list countless mistakes I’ve made and seen other grouse hunters make. But these 14 are some of the most common and harmful errors you can commit. Thankfully, most are easy to correct. Being aware of these potential pitfalls ahead of time is often the only help you need avoid making them.

1. Using an inappropriate firearm. This is somewhat subjective, but many grouse hunters use guns that are way too heavy. They also carry guns with barrels too long. Avoid those two mistakes by choosing a lightweight, short-barreled double, semi-autoloader, or pump for your grouse hunting.Heavy guns weigh you down on the long hikes through the hills and mountainous habitat where grouse live. They are also harder to mount quickly and swing on a fast-departing bird when you only have seconds to find the target and fire. Six-and-a-half pounds should be the top weight. Lighter is better still.A long barrel is also a detriment when working through thick, briar-filled cover where grouse like to hang out. It can easily get caught on saplings and vines when you try to mount and fire.

Carry a lightweight 12-28 gauge shotgun in any action you please with a short barrel, for easy swinging in thick cover. I like a side-by-side double, but autoloaders, over-and-under shotguns, and pumps are also good choices.

Avoid a single shot if possible. Sometimes you’ll miss with your first shot but the grouse will still be in range if you had a second shell available. On other occasions two grouse may flush and you won’t have a follow-up shot available for the other bird.

2. Installing the wrong choke. The thick cover these birds inhabit most of the time means shots will be short range—sometimes as close as 10-15 yards, often 20-25 yards.Open or skeet is the best choice for these shots. At times improved cylinder will be okay if the cover is more open, but very rarely will a modified be a good choice. Open patterns also help those of us with modest shooting skills connect more often with their wider patterns.

3. Selecting the wrong shot size. You can also help your success rate by using a small pellet size. That allows more shot to be packed in each shell, meaning a denser pattern.Grouse are fairly easy to bring down with size 8 pellets for early hunting, 7 ½ for late season. If you’re hunting unusually open terrain or it’s late in the season and grouse are flushing far out, 6s can occasionally be a good choice.

4. Moving too fast. It’s natural to want to cover a lot of ground as you search for grouse. But the fact is, you’ll probably walk past a lot of birds if you use that approach. You’ll also become tired more quickly and won’t be able to hunt as long. Fast-moving hunters also tend to blow right past good cover instead of walking it out thoroughly.

The ruffed grouse knows it blends into the leaf-strewn forest habitat and does not like to fly unless it has to. It would much rather sit tight and let you saunter past than fly. If you walk slower, it will unnerve grouse more and make birds flush that would otherwise just hunker down and wait until you’re gone. 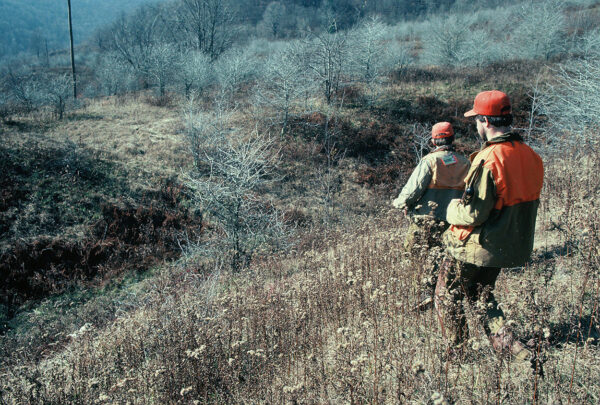 Work slowly so you don’t walk right past ruffed grouse.

5. Not pausing as you work through cover. Besides walking slowly, it’s also important to pause often. This is not just to catch your breath, but also a strategic tactic. A sudden halt in your progress seems to make a grouse feel a predator has spotted him and is about to attack. His immediate reaction is to flush.

This strategy is so effective you’ll flush almost twice as many birds by stopping often in good cover as you will if you simply walk through it. This approach also lets you raise the gun to port arms and be ready if a bird rockets out. Just be sure you stop in a spot where you can swing the gun freely if a bird flushes, and make the pause near a prime log or brush pile that might hold a bird or two.

6. Hunting near parking areas and roads. The logic is clear here. Those are the areas that get hunted the hardest. There are likely fewer birds there because some have been harvested, and those present will also be warier. Hike in a quarter to half-mile or more, and then begin hunting. You’ll likely find more grouse and they won’t be as skittish.

7. Hunting the wrong type of habitat. Usually Virginia’s woodlands consist of two types of cover—open mature forest and thick cover areas that have seen timber either harvested or knocked down by storms. If a section of woods looks park-like and a nice place to take a walk, it’s not grouse cover. Look for the exact opposite—thick, tangled, crowded with saplings and briars and grapevines. Look for greenbrier, rhododendron, and laurel with lots of blowdowns and dense cover.

8. Not pinpointing the grouse’s food. Thick habitat also often has the foods a grouse prefers, but also look for items such as grapes, honeysuckle, ferns, greenbrier, and small acorns. Dogwoods, alder, blackberry, viburnum, sumac, plum, birch, and hawthorn are also favored. Old abandoned orchards are famous for attracting birds and were favorite spots of the old-time grouse writers such as Frank Woolner. Focus on ridges early, later in the season, more protected hollows and stream bottoms. 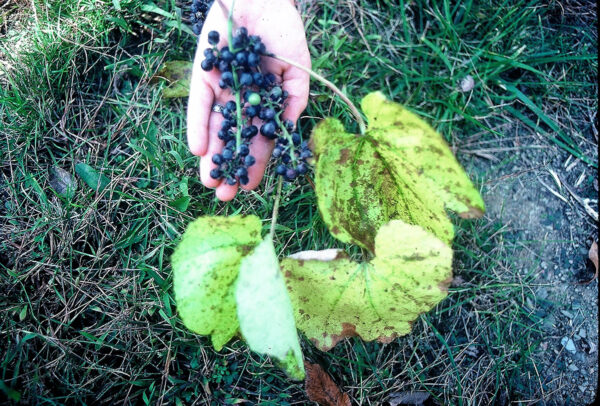 Look for food ruffed grouse like to help choose where to hunt.

9. Using a fast, wide-ranging bird dog. Dogs can be a great aid when pursuing grouse, but a far-ranging animal will likely jump more grouse out of range than it points. Choose a slow-working, perhaps older dog that will stay in sight most of the time and obey your commands well.

10. Hunting in windy areas. Grouse don’t like wind. It masks the sounds of approaching predators. In winter it also robs their body heat. I like to concentrate on hollows, dips, lee sides of ridges. When the wind is especially blustery, drop down even farther into valleys and bottoms.

11. Not shooting fast enough. This takes a bit of practice. When a grouse thunders out with a roar under your feet, it’s hard to pull yourself together and get a quick shot off. But if you don’t shoot quickly, you’ll likely watch your quarry disappear behind brush or a tree trunk in a split second. Raise the gun, cover the bird, and pull forward as you slap the trigger. Make it one quick, fluid motion.

12. Not preparing for a second or third grouse. Often you’ll find several grouse together. If you miss, or if you connect and have marked the spot where the first bird fell carefully, be ready to try for a second grouse.

13. Not watching where birds fly. If you don’t get a shot or miss, pay careful attention to where the bird flies. Often you can re-flush it by following up. It may just cruise over a rise and settle down in the next deadfall or brush pile. Following up is also wise because sometimes you will hit a grouse and not realize it and find the bird 80 or 100 yards out. A grouse is too precious a resource to waste.

14. Not bringing a companion. Try to enlist a fellow grouse nut or even a newcomer to the sport to join you. It’s a more productive way to push birds with two or even three people working spread out through cover. Friends can also be helpful in finding downed birds and it’s safer, in the unfortunate event you slip or injure yourself.

Finally, it’s just more enjoyable to share the woods with a companion who also appreciates the unique appeal of this sport and can share both the frustrations and rewards of pursuing this beautiful, challenging game bird.

Also make sure to read “A New Mindset for the 21st Century Bird Hunter” by DWR Small Game Project Co-Leader Marc Puckett in the September/October 2020 issue of Virginia Wildlife magazine.

Gerald Almy lives in the Shenandoah Valley but travels widely for his work as a full-time outdoor writer. He is currently a columnist for Sports Afield and a contributing editor for Field & Stream.