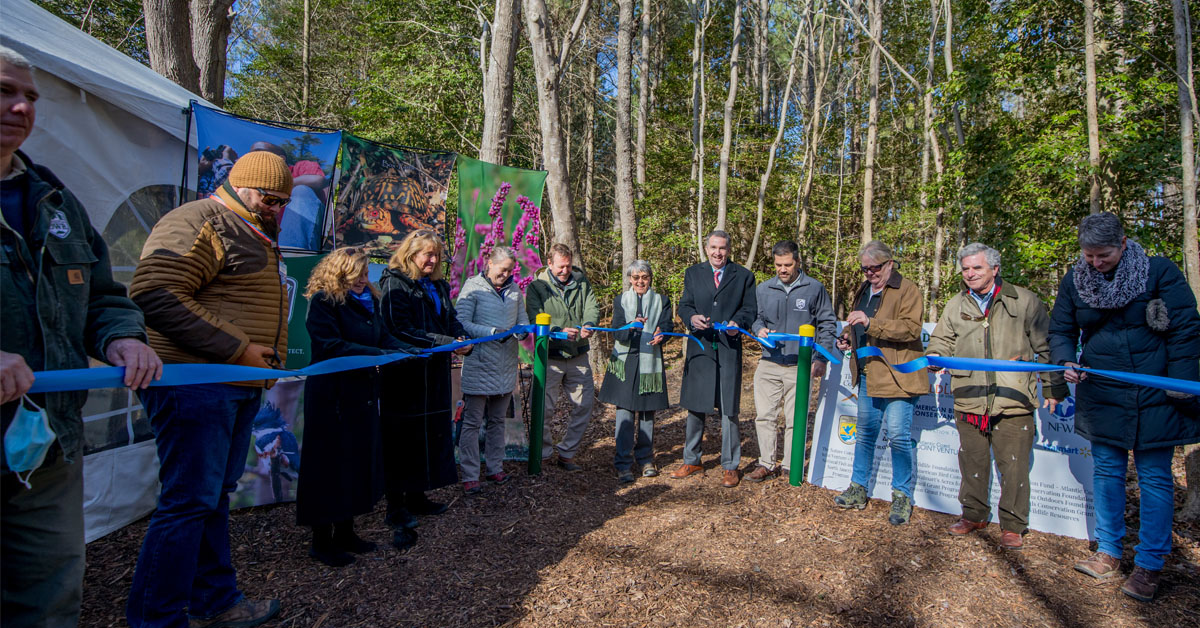 The Virginia Department of Wildlife Resources (DWR) is purchasing land on the Eastern Shore of Virginia as one of the most significant conservation efforts it has ever undertaken there. When completed, this initiative will greatly improve habitat for wildlife, provide highly desirable public access on more than 8,600 acres, and support coastal resiliency. More than 60 priority at-risk wildlife species will benefit from this work, along with hundreds of other species of wildlife and plants found on these parcels. The addition of these 8,654 acres in 65 unique parcels will not only create a conservation corridor through Accomack County into Northampton County to provide habitat for wildlife now and into the future, but will also create extensive opportunities for wildlife-dependent recreation, such as wildlife viewing and hunting.

The majority of acreage is located in Accomack County, with a small portion (two tracts totaling less than 100 acres) located in Northampton County. The purchase will expand the existing Doe Creek Wildlife Management Area (WMA) and also add other parcels of public access to DWR’s more than 225,000 acres of public land. 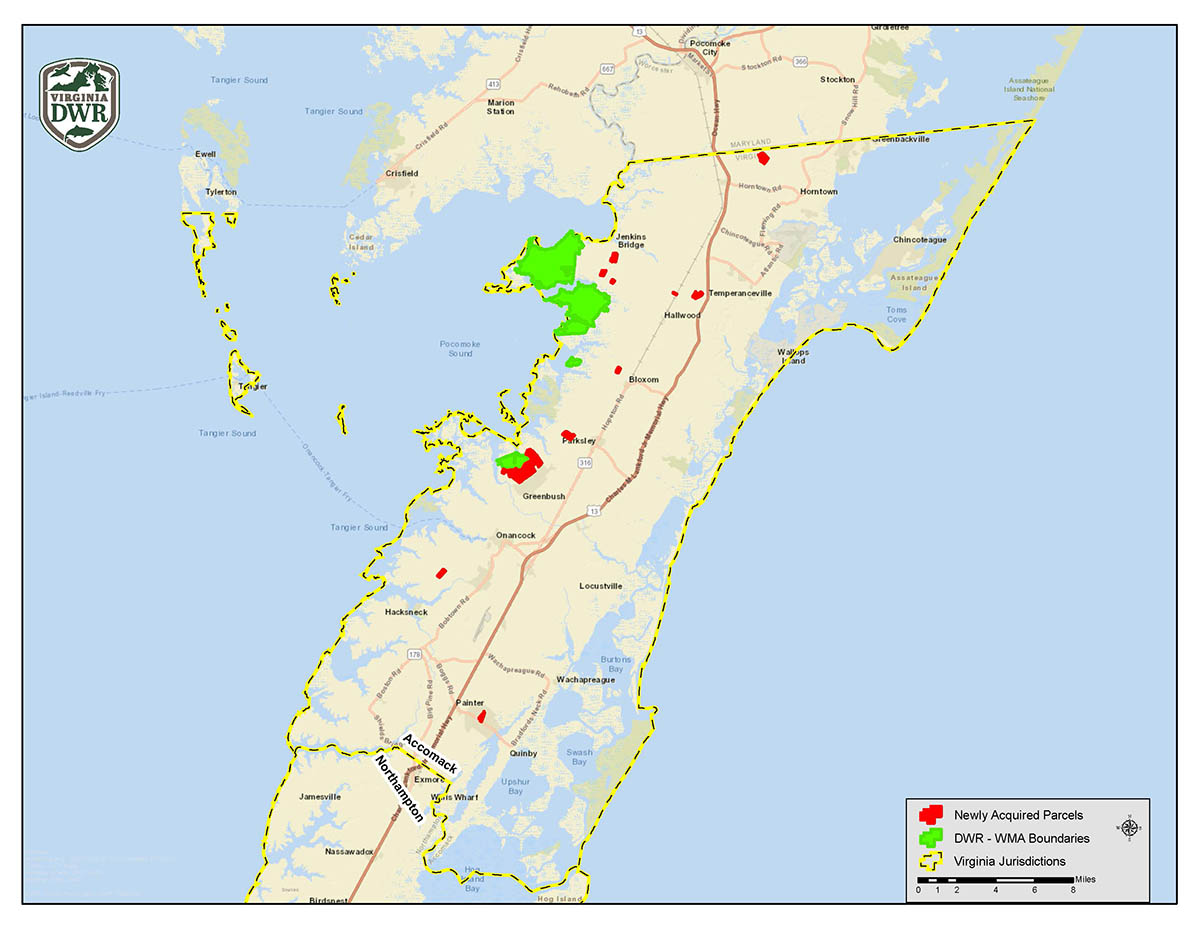 More than seven million birds travel the Delmarva Peninsula during fall migration periods each year, but current research identifies a severe lack of food resources available to these migrants in the Virginia portion of the Peninsula of their journeys. Strategic habitat management by the DWR would include the introduction of native species of trees and shrubs that produce food sources—such as acorns, nuts, and berries—to help offset this lack of resources throughout Accomack and Northampton counties. Forest management will be an important component of the overall habitat management framework. Dr. Bryan Watts, Director of the Center for Conservation Biology and noted ornithologist, has affirmed that, with strategic management, the DWR could double the amount of food resources available to migratory birds on Virginia’s Eastern Shore.

Some parcels are located on the fringe of existing marshes, providing areas for marsh migration during sea level rise, while others are on higher land that will not be impacted for centuries.  Some parcels will be managed strategically to support imperiled species like the Eastern black rail or saltmarsh sparrow.

The newly acquired parcels will be added to the DWR’s Virginia Bird and Wildlife Trail. The properties provide quality habitat for many upland game species, including white-tailed deer, wild turkey, northern bobwhite, and American woodcock. At present, public-land recreational hunting on the Eastern Shore is limited; this acquisition would provide substantial new opportunities for hunters. DWR management of the areas would increase habitat values tremendously for wildlife simply by varying harvesting densities and timings, as well as by introducing managed fire regimens.

New recreational opportunities will be available to over 2 million people who live within a 60-mile radius of Doe Creek WMA and the other parcels that are part of this effort. DWR looks forward to opportunities to collaborate with local, regional and state tourism entities to promote this significant, new public access.  Many of these parcels also occur in areas of moderate social vulnerability and will provide outdoor recreational resources to underserved communities in Accomack County. DWR anticipates opening the properties after completing necessary infrastructure work. 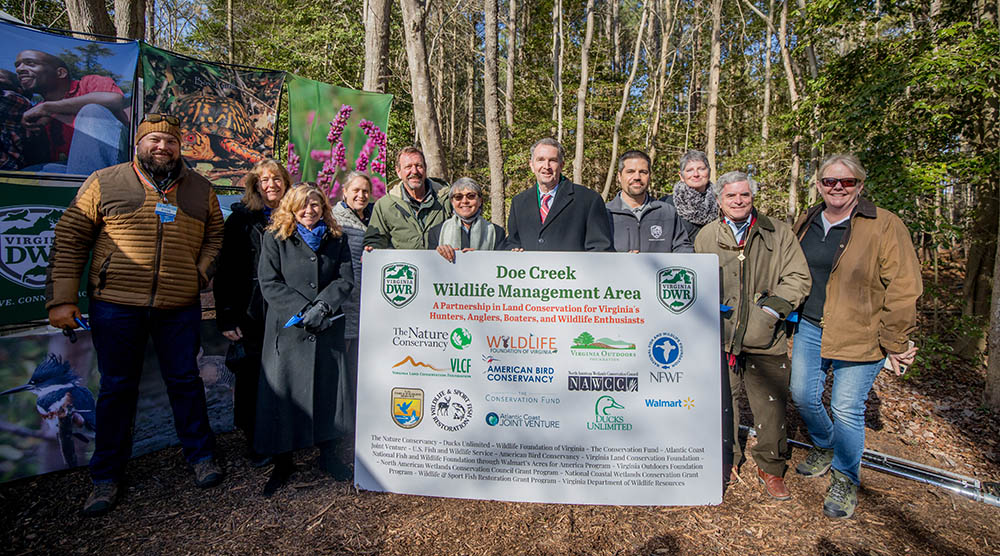