Falconry Gives a Front Row View of Nature at Work

The ancient art of hunting with raptors requires dedication and passion for the sport and the birds. 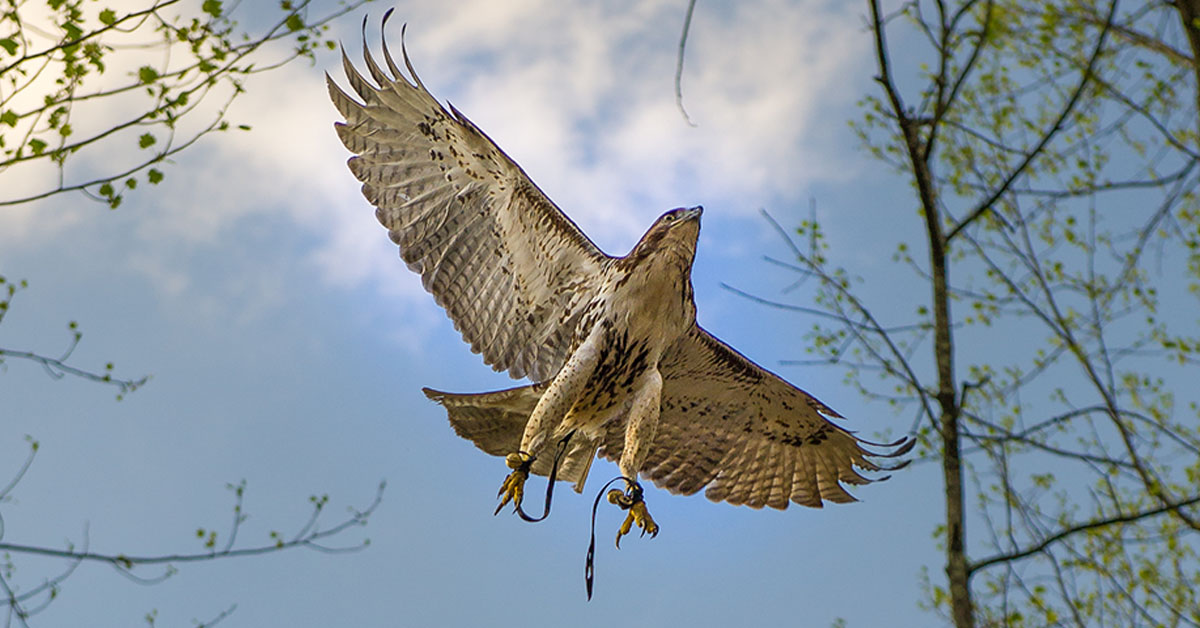 A juvenile red-tailed hawk takes to the sky after release from its keeper to hunt for prey. Photo by Joe Mikus

As the soft leather hood is pulled off, the red-tailed hawk blinks and shakes out its feathers. Perched on a thick leather glove covering its handler’s hand, the bird has a regal, almost mystical air about it. It’s an overcast, cold day in February as the handler walks to the edge of a crop field, searching out habitat likely to be harboring a rabbit. A fellow falconer follows with a long, wooden stick.

In a good spot at a stand of trees and thick brush, the handler releases the leather jesses, or straps, that he’s been holding between his gloved fingers and swings his hand into the air, launching the hawk. The raptor’s wings beat the air with a series of muffled whomps as it springs off the glove and ascends into the gray sky, cruising around the field’s edge before settling into a tree above a dense thicket. Bells attached to the red-tailed hawk’s legs jingle as it makes short flights from one leafless branch to another.

Whistles and calls ring out from the handler on the ground, directing the bird. Crashing noises come from the thicket as the other man beats the brush with his stick, looking to scare up a rabbit or squirrel. Then suddenly, silently, the bird dives down into a tangle of branches and strikes, fixing its talons into a rabbit. On the ground, it tents it wings over the prey, a protective process called mantling, and begins to feed.

Falconry, the sport of hunting small prey with raptors, has been practiced for thousands of years. It’s technically hunting, as a quarry is harvested, but it’s the only kind of hunting where man uses a wild animal to hunt another wild animal. While some hunters use dogs to help them find prey, falconers are the ones locating the prey and facilitating the kill for the bird. 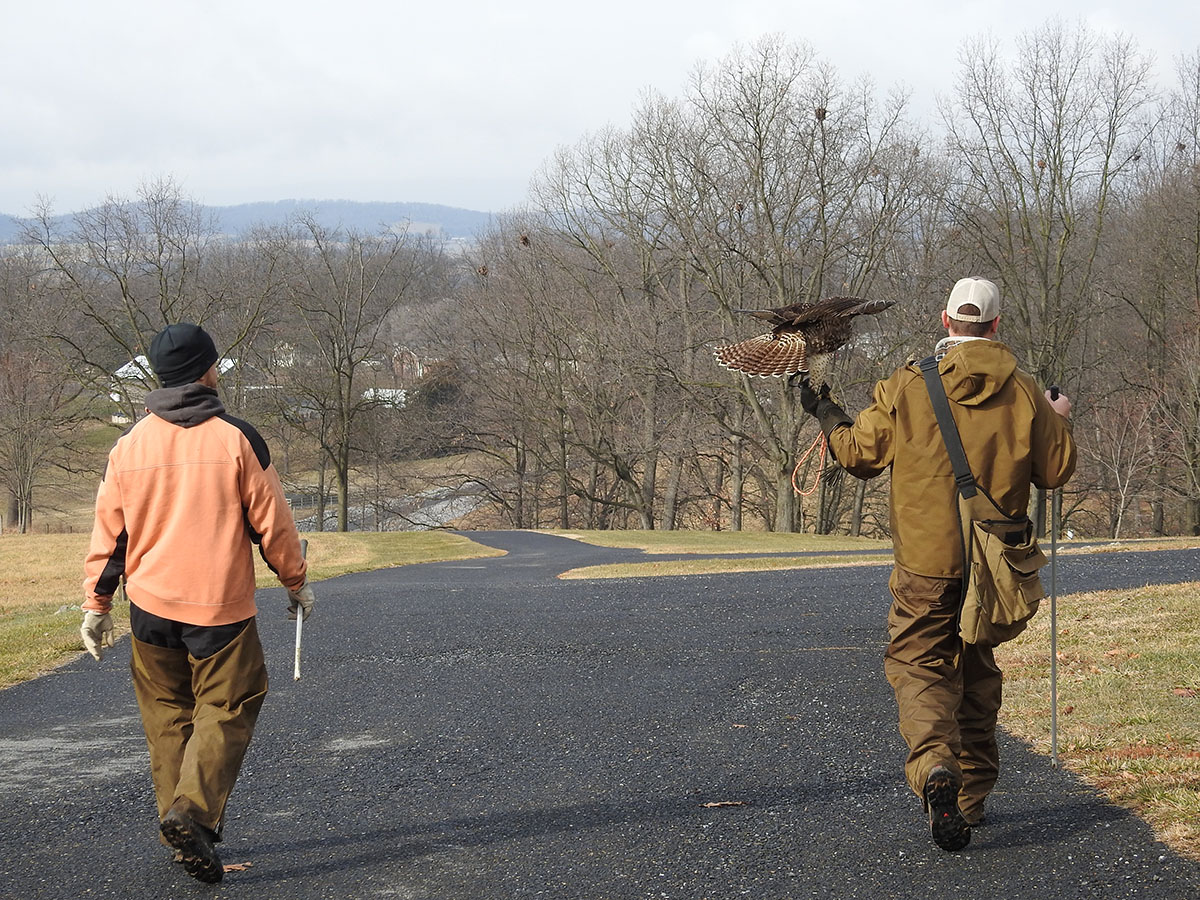 A falconer with a juvenile red-tailed hawk and a fellow falconer setting out for a hunting session. Photo courtesy of Gene Stevans

“For me, it’s as close to being a participant in nature as you can be. Falconry gives us this opportunity to go out there and watch a natural predator do what they do naturally, and be that close to it. We’re interacting with our birds, we’re trying to direct them, but ultimately, they’re just doing what they’re born to do, and we’re just sitting there watching it,” said falconer Isaac Nichols.

What some might not realize is that falconry is also wildlife conservation. Statistic show that many raptors don’t survive their first year in the wild. Falconers capture wild raptors in their first year of life in the fall, train and hunt with them through the winter, and then usually release them back into the wild in the spring. The Virginia falconry season is October 1 – March 31. Those months that a bird is used for falconry aren’t just about the sport—they also give that young raptor a much better chance at survival in the wild once it’s released.

“It doesn’t matter what size it is, that bird’s chances of survival increase if it gets through the first year of its life,” said Gene Stevans, president of the Virginia Falconers Association. “It doesn’t have a lot of experience, so it can freeze or starve to death or be killed by predators like foxes, possums, or raccoons. Although it’s a business relationship between the raptor and falconer, we offer a safer opportunity to help that bird become a better hunter, gain experience, and get through its first hard winter. When we send it back into the wild in the spring, it has a year of experience under its belt.” 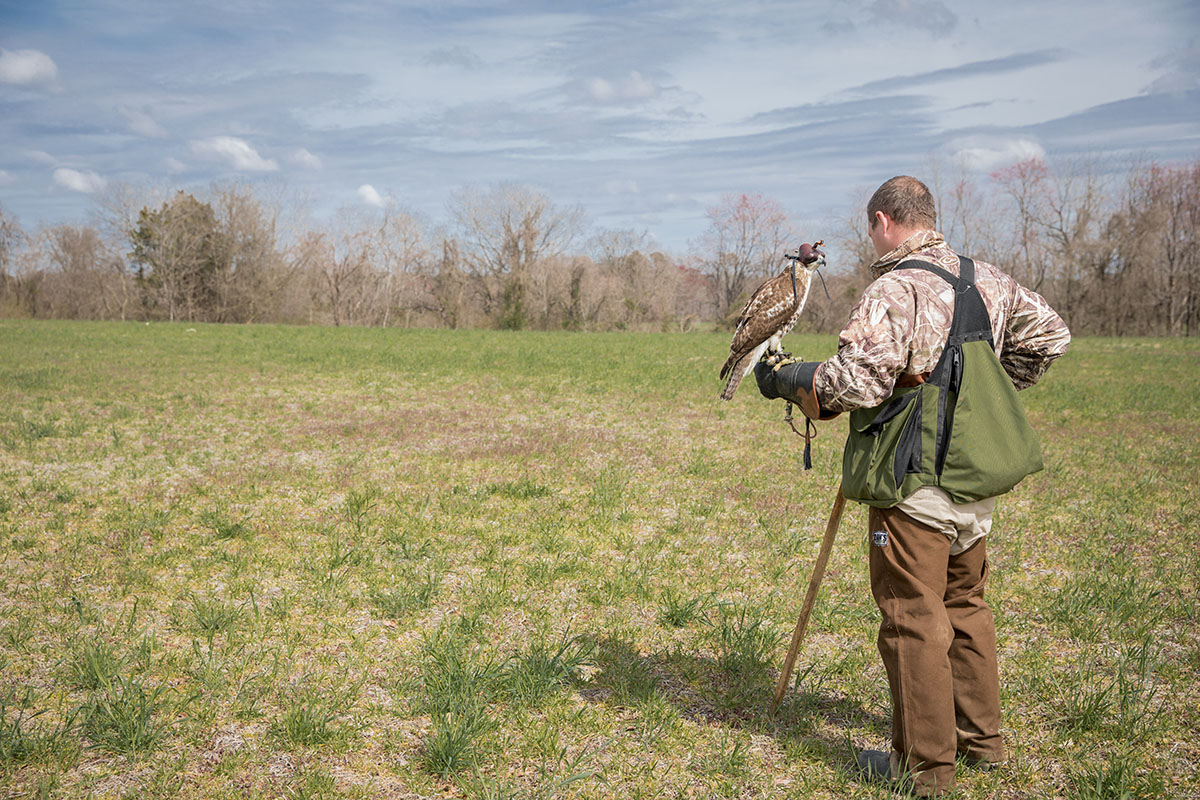 The falconer prepares to remove the bird’s hood before release to hunt. Photo by Meghan Marchetti/DWR

It is possible to keep a bird, or “inter-mew” it, for multiple seasons for various reasons, but most falconers appreciate the conservation aspect of the release. “A lot of us enjoy the aspect of giving back to the species,” said Nichols. “We like to see them have a greater chance of going on and surviving and adding to the population.” Indeed, falconers played a role in the revitalization of the peregrine falcon population in Virginia.

While most falconers trap native, wild raptors to help them through their first year, falconers can also purchase domestically bred birds, including birds not native to North America.

What species of raptor a falconer uses depends on their personal preference and on the game that’s available to them. If a falconer has permission to hunt on properties with healthy populations of squirrels and rabbits, they might choose to hunt with a red-tailed hawk, Cooper’s hawk, or goshawk. A falconer in a region with sparrows, pigeons, doves, or ducks might choose to fly a kestrel, sharp-shinned hawk, Cooper’s hawk, merlin falcon, or peregrine falcon.

There are currently 98 licensed falconers in Virginia. It’s a sport tightly regulated by the U.S. Fish and Wildlife Service (USFWS) and the Virginia Department of Wildlife Resources (DWR), with Apprentice, General, and Master Falconer levels of permitting. Apprentice falconers must be over the age of 12 and are required to complete a two-year apprenticeship with a Master or General Falconer. In that time, the Master Falconer teaches about the husbandry and training of raptors held for falconry, relevant wildlife laws and regulations, what species of raptor is appropriate.

Before a permit is approved, a DWR representative inspects the aspiring falconer’s equipment and housing for the bird (called a mews). DWR regulations are quite specific about adequate housing, requirement, and care, and falconers must file forms to report on the take, transfer, and loss of birds. In addition, the apprentice applicant must answer 80% of questions correctly on a supervised, 105-question exam, complete a hunter education course, and hold a valid Virginia hunting license.

Once an Apprentice Falconer has completed two years of apprenticeship with General or Master Falconer, they may apply to be a General Falconer with a letter of recommendation from their mentor. To progress from General to Master Falconer requires practicing falconry at the General level for at least five years. 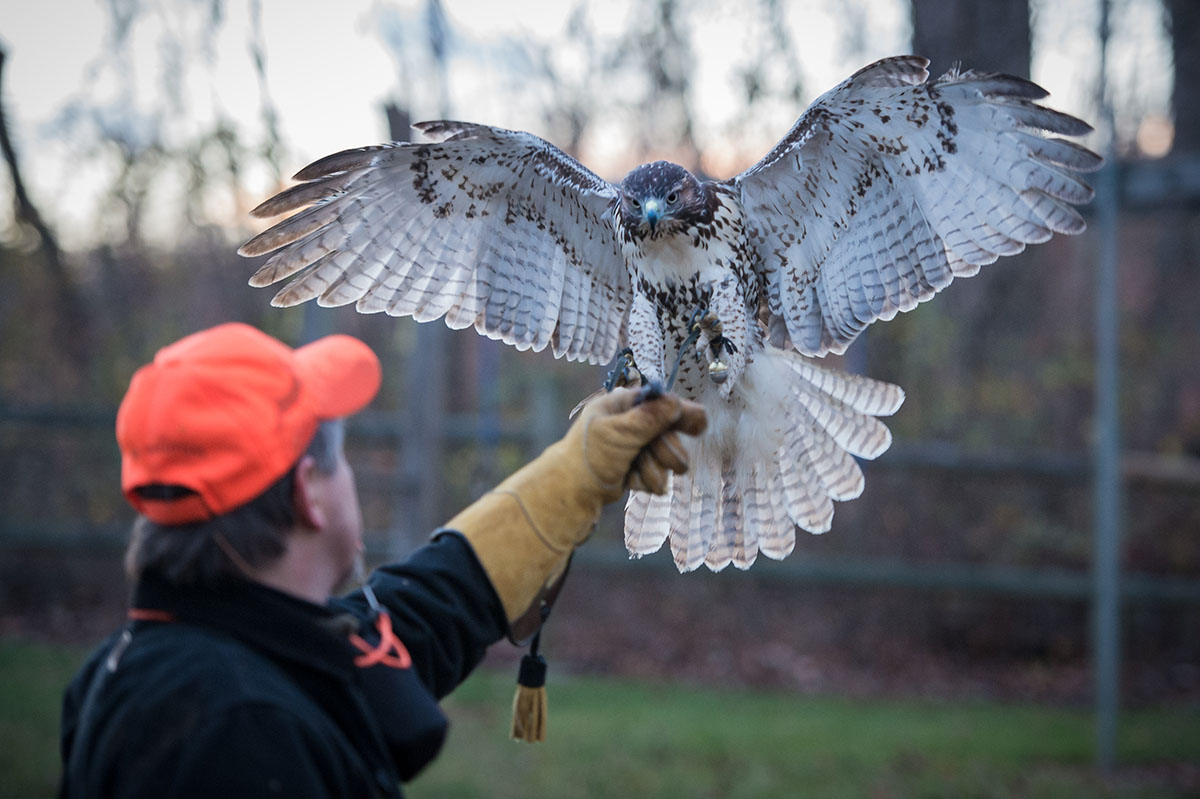 It’s not a sport to be undertaken lightly, as it demands significant investment of time and effort daily in the care and training of the bird. Raptors flown by falconers aren’t pets. In fact, if a falconer is absent from their bird, they’re required to have another permitted falconer feed the bird. “The bird has to hunt; it has to be able to survive on its own,” said Stevans. “It doesn’t mean you can go out hunting just every Saturday. It might not be convenient for you, but that bird has to go out four or five days a week to hone its skills because eventually it has to survive on its own. It’s hard to describe that to people.”

“You have to find the time to give the birds their due attention,” said Nichols. “Being a part of nature is a big responsibility, and nature goes on without you. If that bird isn’t hunting like it would in the wild, then bad things happen to it. We all feel that responsibility to do that. It all comes down to time and effort. You can’t put a bird in a closet like a gun or fishing pole. It’s a living creature that needs care and time. That’s the biggest obstacle to overcome for falconers.”

The other requirement for a falconer is a willingness to accept the challenges of an outdoor activity and the stark reality that falconry is hunting. “I had a 16-year-old who had read The Other Side of the Mountain and he couldn’t wait to get out hunting. I finally took him out, and the first thorn bush smacked him in the face and he realized, this sport is not for me,” said Stevans. “You have to understand that when you hunt or fish, something’s going to die. Some people don’t understand that and they don’t want to be part of that cycle of life.” 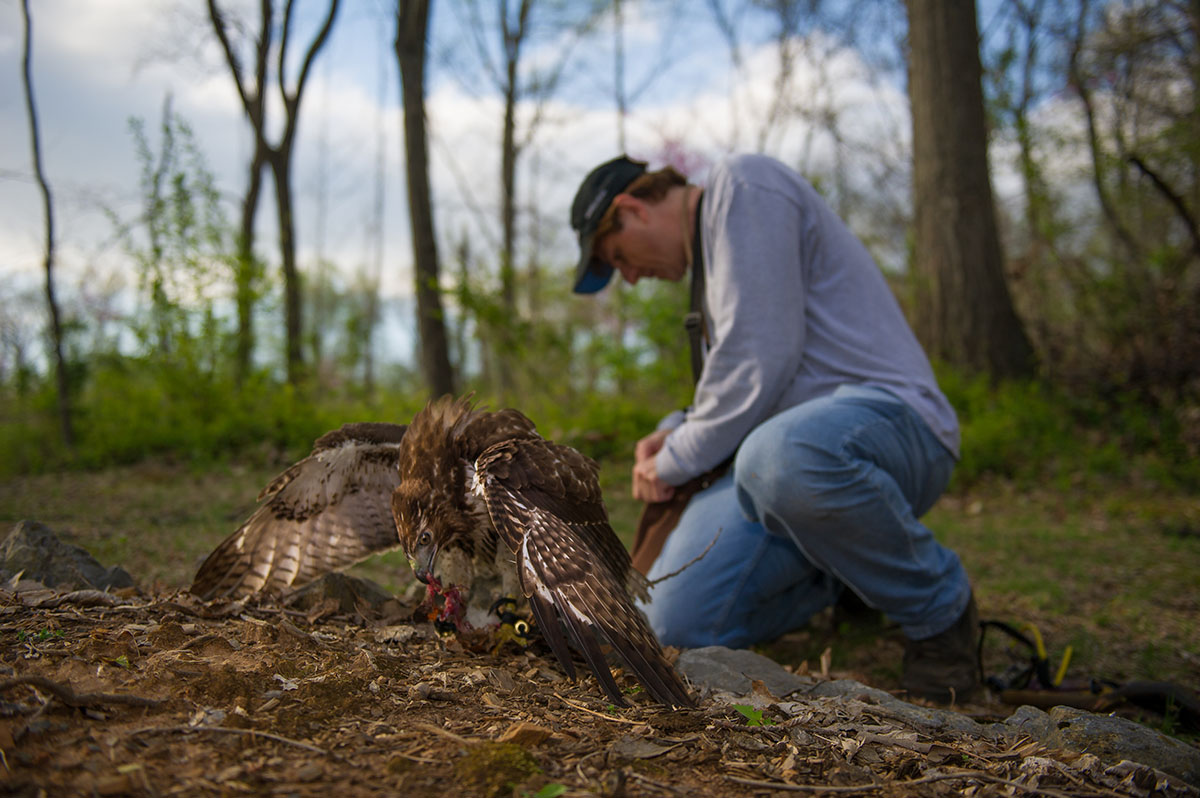 Nothing is more satisfying to a falconer than seeing their bird mantle over its prey. Photo by Joe Mikus

While falconers have a strong appreciation and affection for their birds, they understand that there is no emotional bond on the bird’s end. A raptor doesn’t see the falconer as anything but a source of food. “There is no bond that happens. We are the dogs; it’s our responsibility to find the game,” said Stevans. During the training of a bird, the goal is to build trust and have the bird identify the human as a reliable food source, whether it’s providing meat in the mews or beating the bushes to find prey while hunting.

Falconers carry pieces of meat with them and hold them in their gloves to encourage the bird to return to their glove if a hunt isn’t successful. If they aren’t successful hunting, the birds return to the glove only because they know there will be food there. Every time a falconer releases the bird to hunt, there is a chance that bird may not return. It is a choice the bird makes on its own, and so if a bird considers its chances of finding prey are better in the wild, he will fly away.

Falconers transport their birds in compact, closed boxes called giant hoods, but they also use close-fitting leather hood on the birds’ heads to block their vision until they’re ready to hunt. “A bird is like a child; if it can’t see, then it doesn’t know to be afraid of something. When you hood your bird, it calms the bird down,” said Stevans. 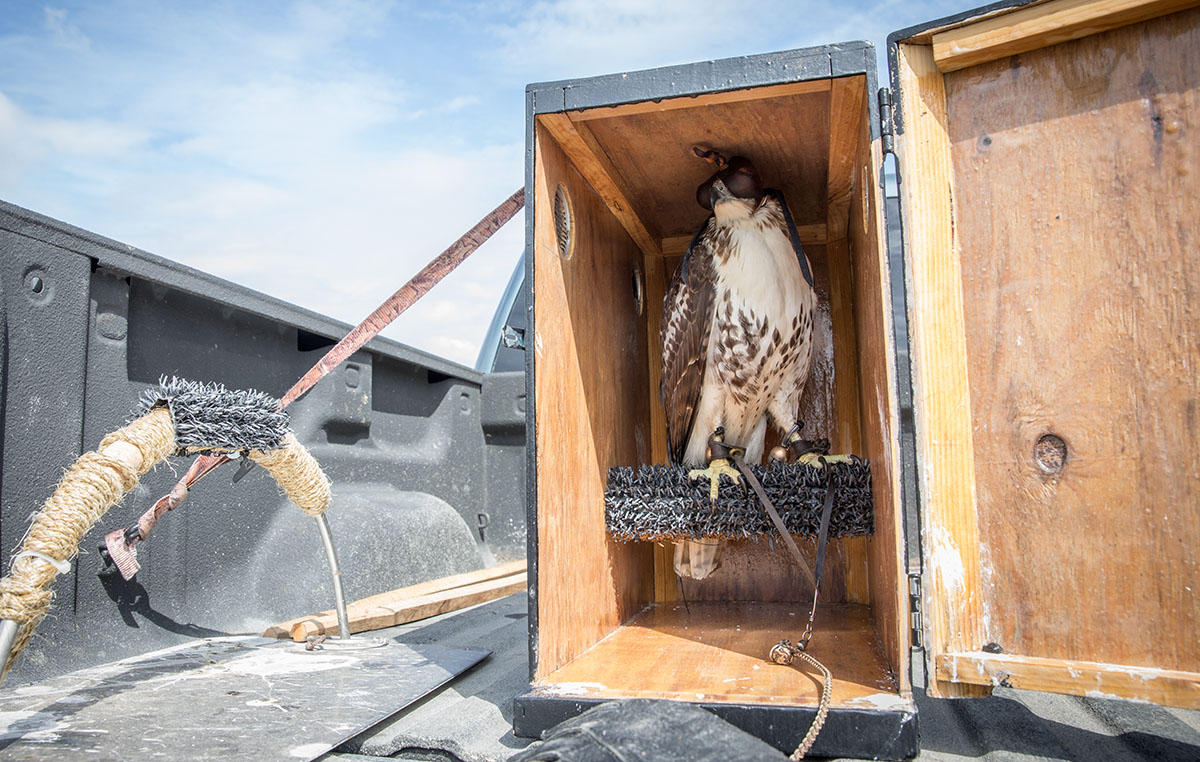 The bird also wears leather anklets called bewits with bells attached to them so that the falconer can track the bird’s location. Attached to the anklets are jesses, short straps that the falconer holds in his hand or glove to anchor the bird. A falconer can also attach a longer leash to the jesses, used to tie and handle the birds. This equipment is usually made of leather because it will degrade and fall off if the bird accidentally returns to the wild while hunting and wearing it. Some falconers so use GPS and telemetry equipment to enable them to track the bird. 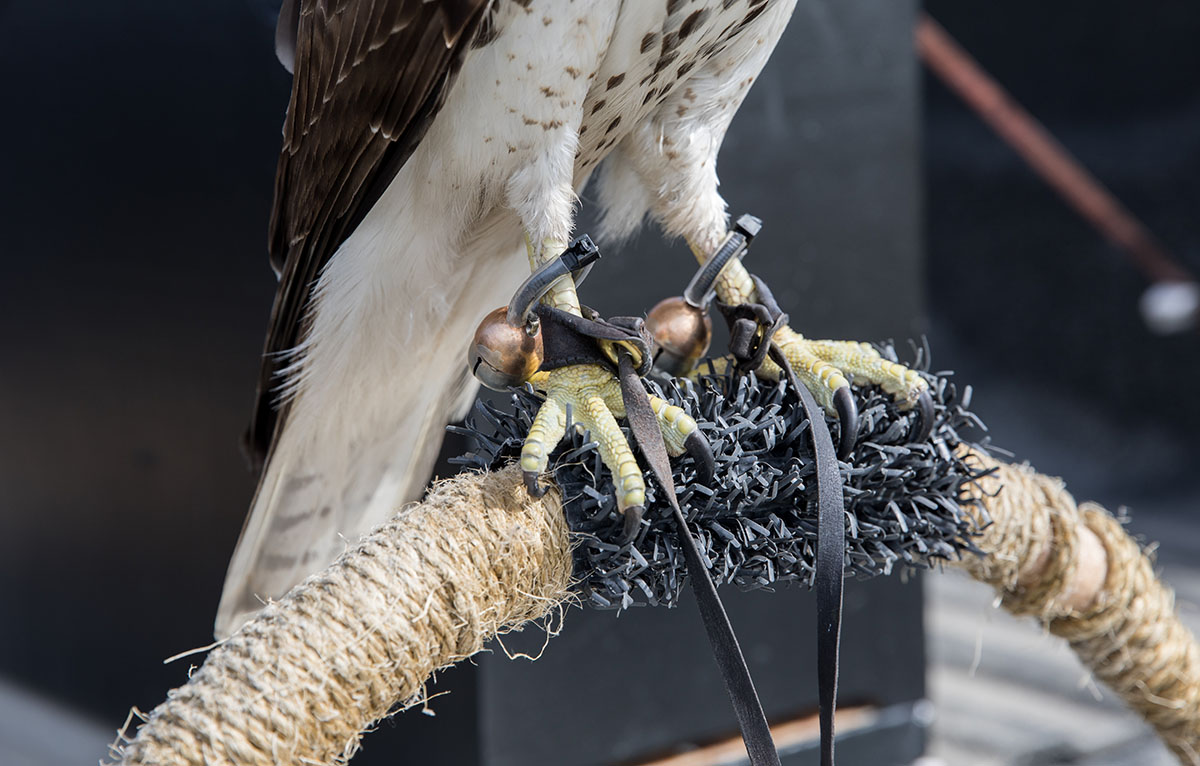 Most falconers wear a glove for the bird to perch on to protect themselves from the sharp talons and give the bird a surface to grip, but some smaller birds such as kestrels can land and perch without a glove.

Falconers keep a close eye on their bird’s weight both to monitor their health and to know when the bird is ready to hunt, weighing them daily on a digital scale. They aim to have a bird fit and healthy, but also quite hungry when they’re planning to hunt. In the training process, falconers get to know each bird’s ideal hunting weight to the gram. In addition, they can read the bird’s temperament and know when increased aggression indicates hunger and an urge to hunt.

When a bird is successful and downs prey in the field, the falconer assists in killing the prey, then allows the bird to eat. Usually the falconer will pull portions of the prey away and save them for future meals in the mews.

That moment when a raptor mantles over its prey provides the falconer with numerous rewards—the satisfaction knowing they’ve helped a wild creature survive, the culmination of their hard work and training, and the thrill of seeing nature’s life cycle up close. “What really drew me to falconry had to do with admiration for the bird and its ability to survive,” said Stevans. “They’re fascinating.”