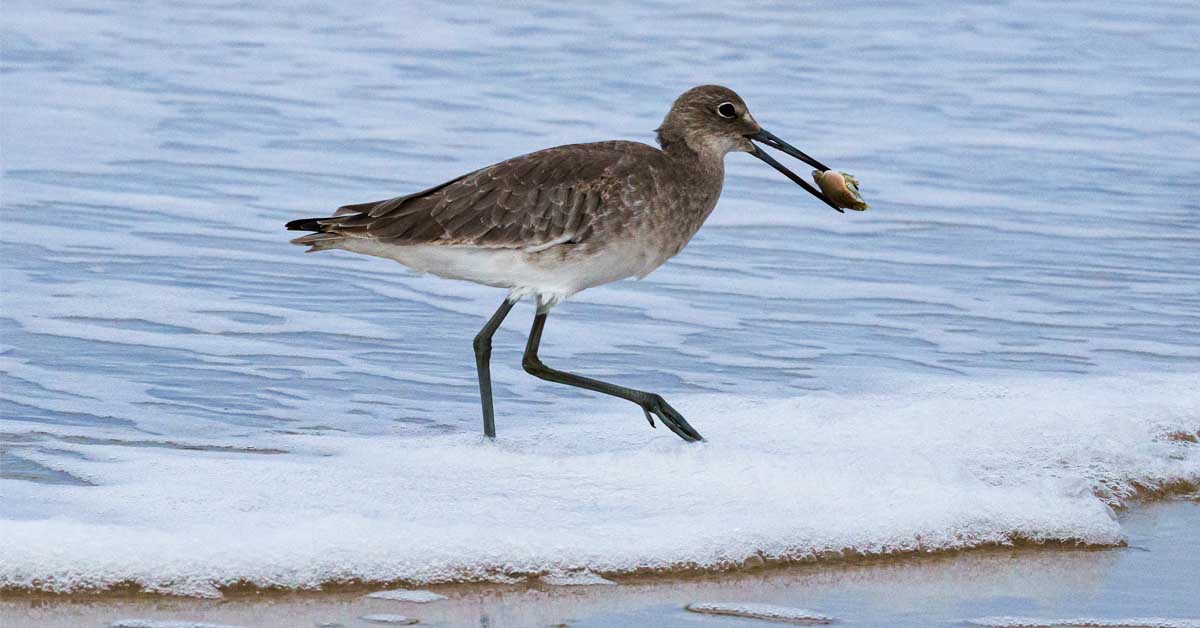 A willet spotted on the beach.

“Woke up at 4:30 a.m., too excited to go back to sleep. One of my favorite things about camping is waking up before dawn to make a fire, prepare breakfast, listen to the birds, and catch a sunrise.” This is how I began a journal entry after exploring locations on the Eastern Shore Loop of the Virginia Bird and Wildlife Trail (VBWT). First on my list was Kiptopeke State Park.

Before I began visiting the VBWT loops, I had already started my Trail Quest journey. Trail Quest is a program hosted by the Virginia State Parks that rewards adventurers with pins for visiting one, five, 10, 20, and finally all Virginia state parks. It was a two-birds-with-one-stone happening for me to enjoy both the VBWT and Trail Quest at Kiptopeke State Park.

I spent my first day covering the trail system at Kiptopeke State Park in the morning, and Magothy Bay State Natural Area Preserve and Savage Neck Dunes Natural Area Preserve in the afternoon. Kiptopeke’s trails total just over six miles and are appropriately named after birds, with titles such as Brown Pelican Trail and Songbird Loop. As soon as I set boot on trail, the birdsong began. Standing still in the woods, I heard flutters and rustlings of birds playing in brush and leaf litter. Taylor Pond was especially alive with feathered friends. It made sense, then, that I would be across the pond only to turn around and see a large gathering of folks with binoculars birdwatching. The pond is equipped with two bird blinds, but I found the best luck with birdwatching on the far side of the pond near the butterfly garden. 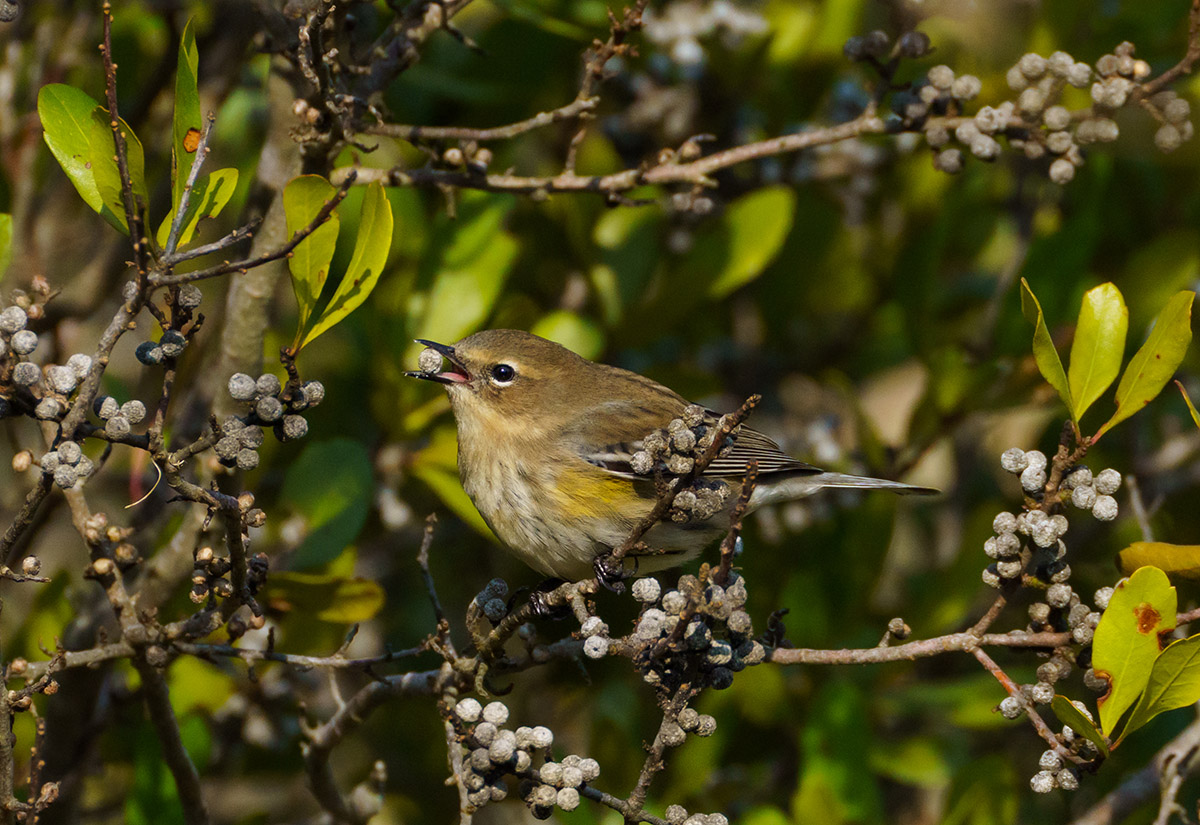 After exploring the trail system, I returned to the hawkwatch platform that I had passed earlier in the day. Being a mostly solo adventurer, areas that are more crowded can make me somewhat nervous. This was one of those areas, but I pushed those feelings aside and am glad for it because I met a lovely woman named Jenny. She and I chatted about travels, birds, the states we’ve been to, and hopes for future adventures. She eyed my camera and asked me about photography, while I spotted her corgi and asked to give him some rubs. I shared with Jenny that I didn’t have any binoculars with me, and she graciously allowed me to borrow hers. I gazed above the platform while she identified the bird silhouettes for me: two bald eagles. I could hear several other spectators softly identifying bird calls to one another.

After a second breakfast, I drove over to Magothy Bay State Natural Area Preserve. The trail here is a flat 3.4 miles, which I took clockwise, traversing through woods, wetlands, and salt marshes. I caution anyone who plans to visit to please bring bug spray (even in October). Those mosquitos are no joke! 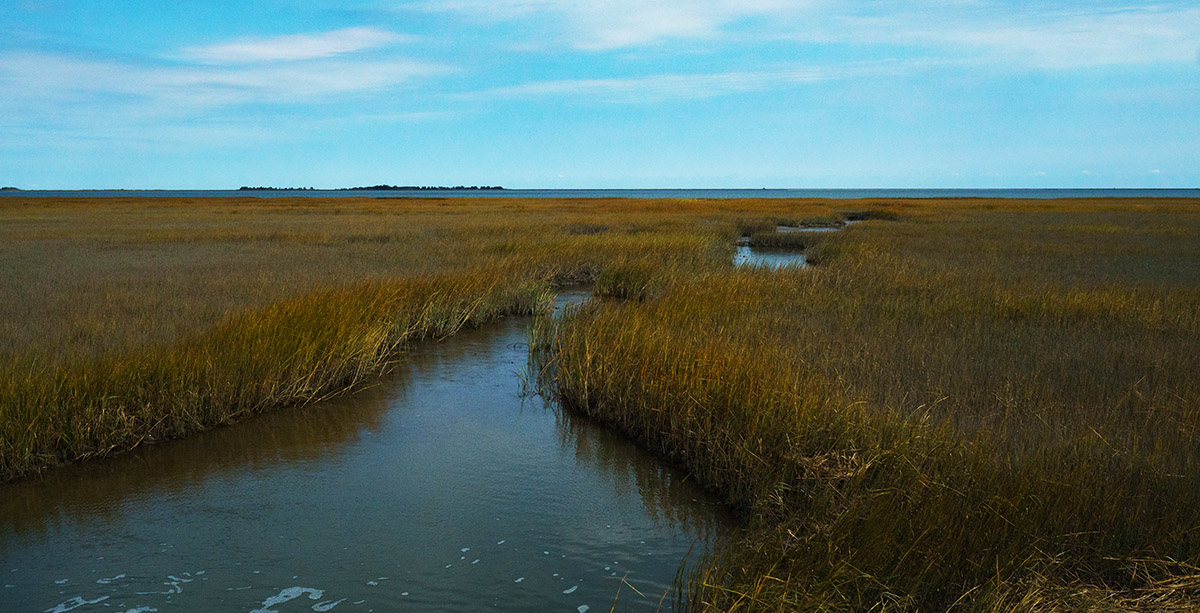 As the trail emerged from the woods and out into the wetland area, the wildlife came out too. I watched a small group of deer bound through a field visible by their perfectly white tails flashing through the tall grasses. Further along the trail, I came upon a white ibis gracefully stepping its way down the trail. After it realized I was behind it, the ibis gave me many side-eye glances before flying off to a nearby tree. Not yet recovered from its piercing sky-blue eyes, I didn’t immediately notice the committee of vultures around a turn of the trail. It must have been a group of at least 30 gathered on a grassy area of the path. After my presence was noticed, each vulture took off—one by one—as if offering a salutation before flight. 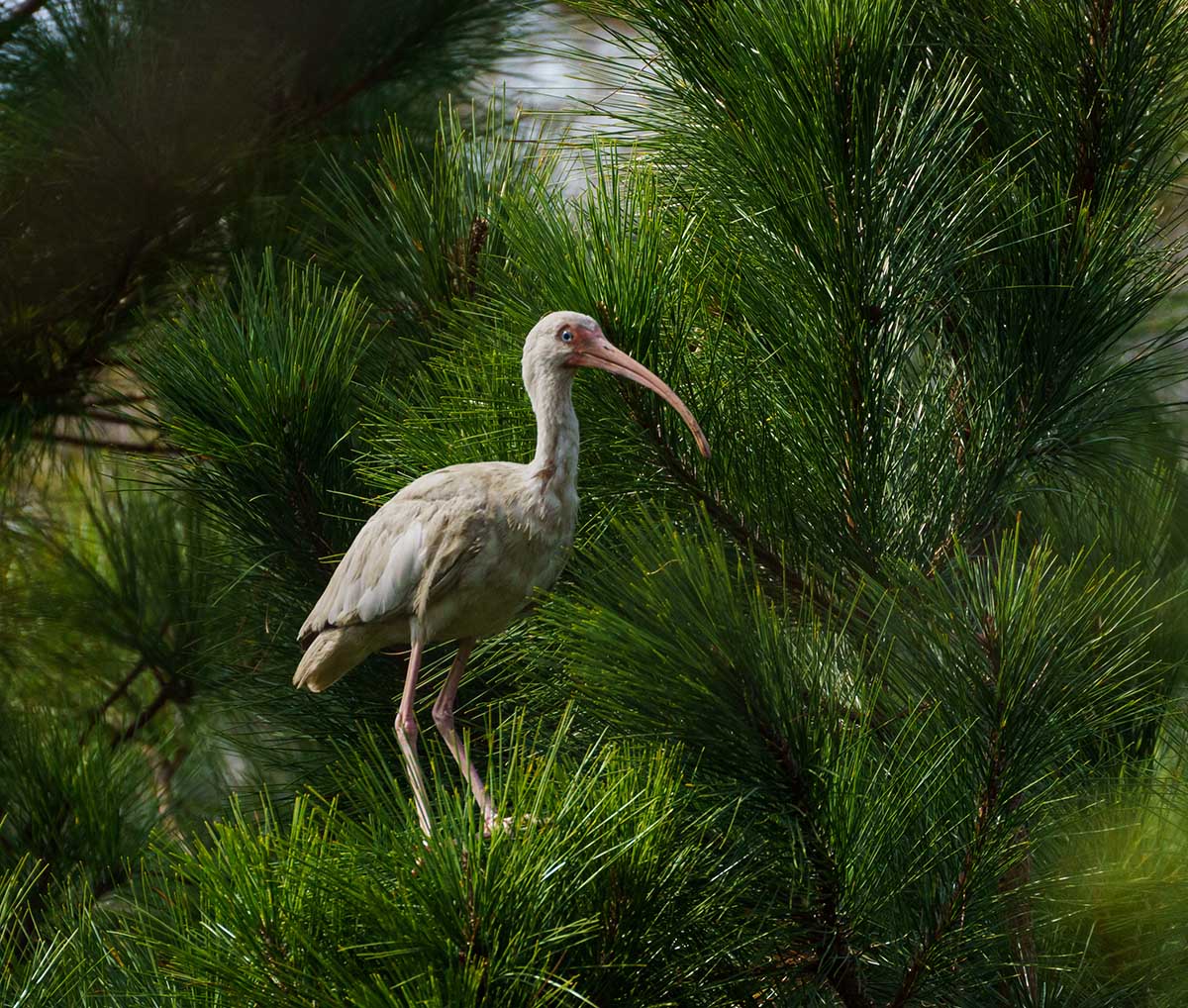 Ever been side-eyes by a white ibis? I have.

That evening, I returned to Kiptopeke State Park to catch some sleep before venturing off to Cape Charles Natural Area Preserve the following morning. I awoke to trills and whinnies of screech owls outside my tent. In the distance I could also hear the “who-cooks-for-you” call of a barred owl. Already, I knew this would be another grand day of adventures.

Cape Charles Natural Area is a lovely little spot with several boardwalk trails that lead down to the beach, though there is no direct beach access. A small portion of the trail is directly beside the parking area and provided the best wildlife viewing during my visit. I watched warblers and catbirds dart between boardwalk rails and into trees so quickly that I feel fortunate to have stolen a few photos of them.

After exploring the remains of Fort John Custis, I followed the trail to a small boarded overlook with a grand view of the ocean beyond wetlands. It was here that an osprey put on quite a show for me and another woman who was quietly watching. It glided with ease across the sky, swooping low and cruising high. Just when we thought we had lost sight of the osprey, we heard the tree branches just above us crackle under its talons. No idea if it was crashing through the tree or had landed there, but it gave us both a scare! 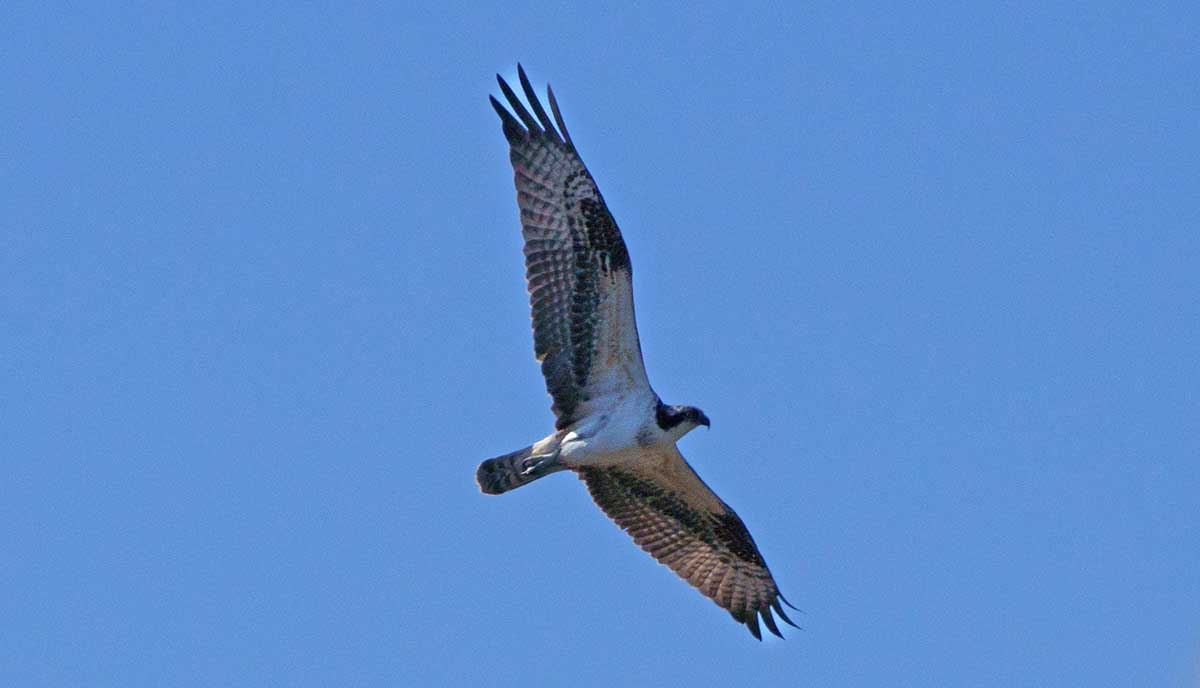 The ospreys soaring above were striking.

This is the first time I’ve visited the coast in fall and I now understand the excitement of birdwatchers. What a joy to watch smaller birds like warblers quickly dancing and larger birds like eagles soaring with ease during fall migration. My new friend Jenny shared that she had just visited a different hawk watch event near Shenandoah National Park, closer to my home. I asked if she had a chance to visit the park and she gleefully shared that she snuck away from birdwatching to enjoy a bit of Shenandoah. A seasoned hiker of the national park myself, I think I may have to sneak away from a hike to a few hawk watch events next year.

Explore the Wild with Meg Raynes 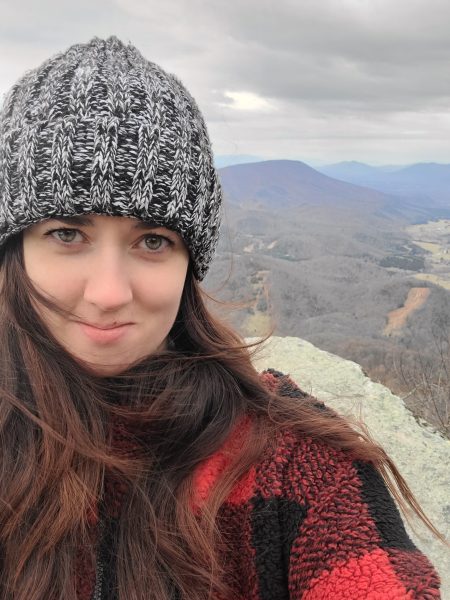 Meg Raynes is a hiker, traveler, photographer, and teacher.

If you would like to follow along as she explores the Virginia Bird and Wildlife Trail, then make sure to subscribe to DWR’s Notes From the Field newsletter.

You can see more of Meg’s plant and animal observations during her adventures by following her on iNaturalist.