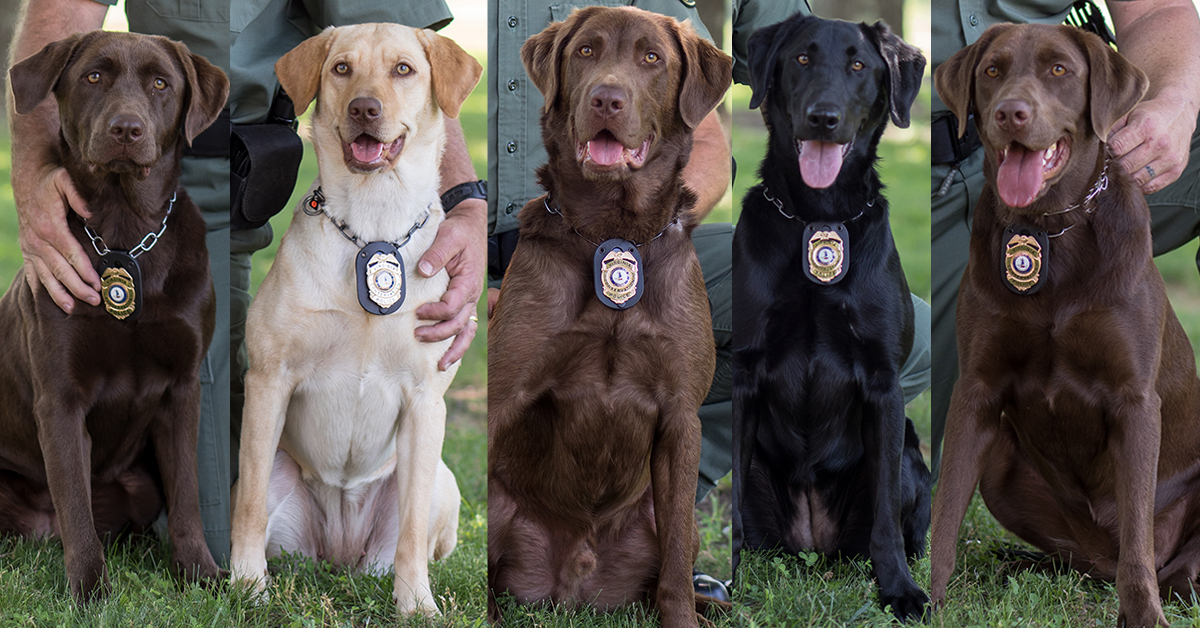 The five handlers and dogs that have spent the spring training to be K9 Conservation Police Officers for the Virginia Department of Game and Inland Fisheries (DGIF) have completed their training sessions and are currently working as officers with the DGIF Conservation Police. Several of the dogs have contributed to solving cases already! 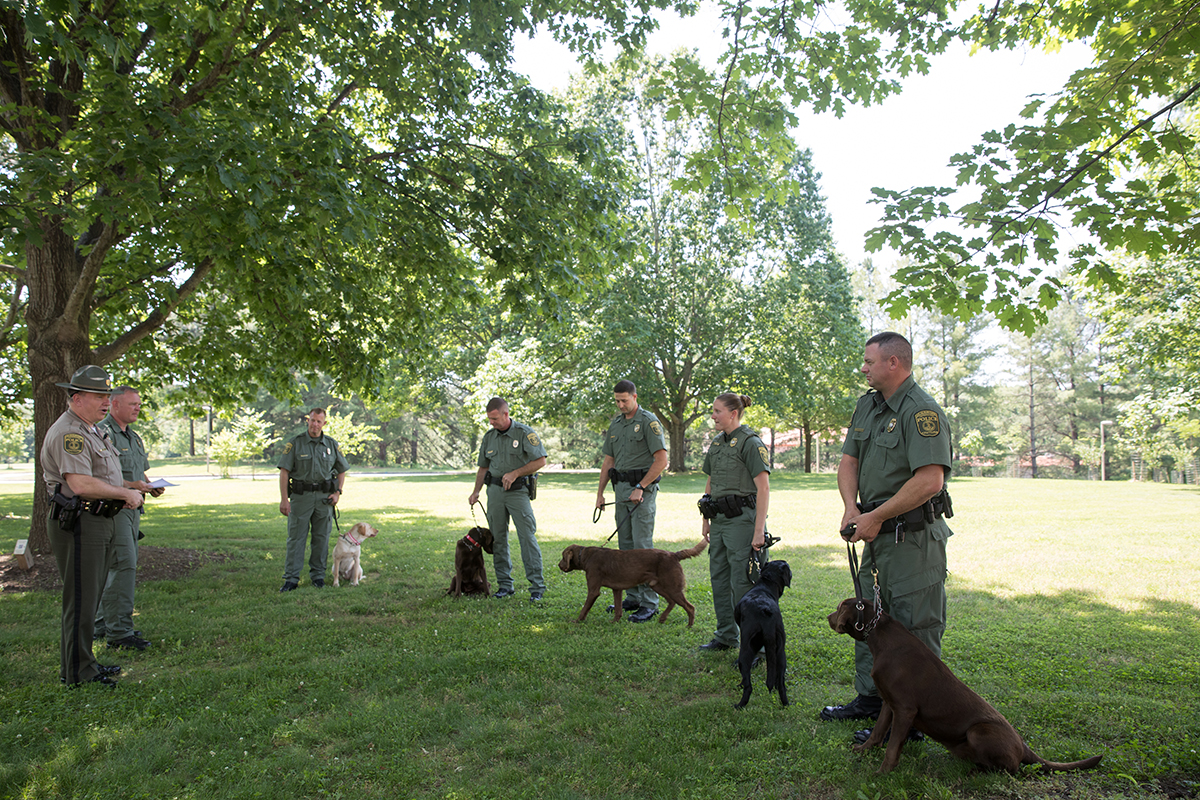 The five K9 trainees and their CPO handlers participated in a certification ceremony.

K9 Bruno and handler CPO Tyler Blanks were called to assist on a call where an individual had trespassed onto posted property and killed a hen turkey after hours. “Bruno and I arrived on scene and began an area search just like we had practiced in training except this time everything was unknown to us,” Blanks said. “Bruno located turkey feathers at the kill location in tall grass and then located the wad from the shot shell. I rewarded him for the find with his toy and put him back to work to find the shotgun shell, which was in the woods. The evidence Bruno found confirmed the shooter’s location when the shot was fired and shot direction. It was determined that the individual trespassed on two separate properties and killed a hen turkey out of season and after legal hours.

“I was stunned for a second when Bruno found the shotgun wad in the field,” Blanks continued. “I noticed his change in behavior when he located the odor, and then he sat to alert on the item. When I approached and saw it was the wad from the shot shell I could not have been more proud of him. Even the officer I was assisting yelled from a distance and said, ‘Man that just made me proud.’” 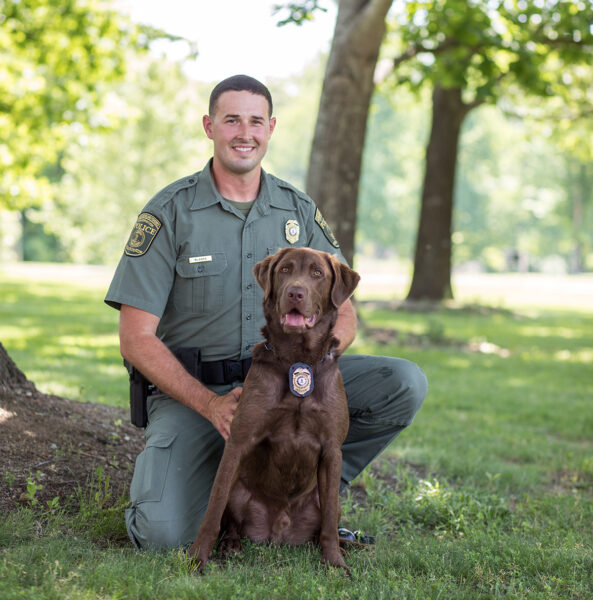 With the evidence Bruno found, CPOs were able to confirm the statement a witness had given them. “Being able to see exactly what happened and having evidence in hand made an interview much easier once contacting our suspect,” Blanks said. “Locating small evidence items is very difficult and impossible in most cases, especially when the incident occurred 17 hours prior as it did in this case. We could have walked that tall grass field for hours and never found what we were looking for. Bruno was able to quickly piece the scene together with his keen sense of smell and saved officers valuable time.”

Bruno is just one of the recently graduated K9 CPOs that has contributed considerably to positive outcomes in cases. The K9s and their handlers have been able to immediately apply the skills they learned in training to work in the field.

In the final of the three intensive sessions of training, the five trainees solidified their skills in tracking and article searches. Instructor and Senior CPO Richard Howald increased the technicality of their exercises to test them in new ways and expand their capabilities. The K9 handlers also got some training on how to conduct education presentations with their K9 partners.

“We really got to focus on the dogs, on the training, on working together,” said Master CPO Mark Diluigi, who handles K9 Lily, of the final training. “Things got a little trickier in that last session. I would say we are ready to go to work, but just like a new recruit who’s all trained and sworn in, the actual situations in the field will be all new. But we’re ready for what the world is going to deliver to us!

“We made sure everybody was where they needed to be in the training process,” Diluigi continued. “All the handlers are different, and so are the dogs. It’s like kids in school; some kids take a little longer to grasp it, but they really get it and run with it when they do. Every dog is different; every handler is different. You have to work with your dog and read your dog. I can track with my dog and understand what’s going on and what she’s doing, but I couldn’t take Reese out and run him and be successful right off the bat because each dog is an individual and works differently. It was interesting to hear us all talk about our dogs.” 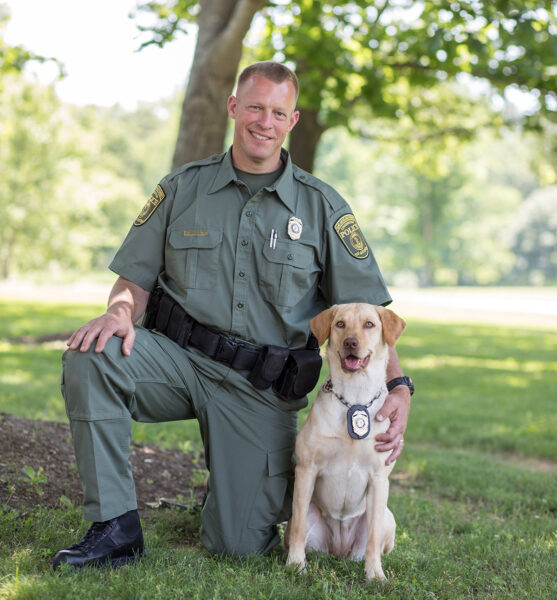 The K9s and their handlers will continue to train to keep their skills sharp and even to add to their repertoire. “We’re going to try and train together as a K9 unit two times a month,” said CPO Bonnie Braziel, who handles K9 Grace. “We are ultimately responsible for the progression or regression of this dog. The amount of time and effort, not only us, but also our instructors, the other handlers, have put into it, you don’t want to let anybody down.”

K9 Grace has impressed Braziel with not only her stellar work ethic and abilities, but also her endearing personality. “I’m extremely proud,” Braziel said. “Grace is such an awesome worker. I just want to keep giving her the spotlight she deserves. She failed out as a field trial dog [before she was donated to the DGIF K9 program], but I think she can really be a superstar at this.” 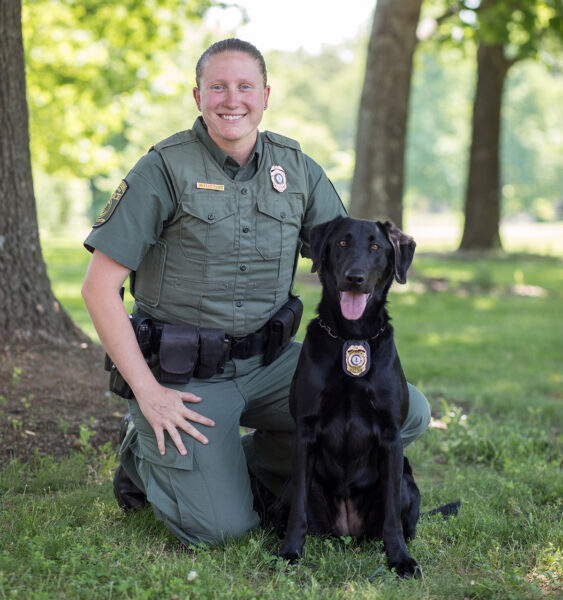 Due to social distancing restrictions because of the coronavirus pandemic, there wasn’t an official celebratory graduation ceremony for the K9s and their handlers, but they were able to meet as a K9 unit where the dogs received their badges and certification. The five recent K9 graduates—Master CPO Mark Diluigi and K9 Lily, Senior CPO Wes Billings and K9 Molly, CPO Tyler Blanks and K9 Bruno, CPO Ian Ostlund and K9 Reese, and CPO Bonnie Braziel and K9 Grace—join current K9 officers Senior CPO Richard Howald and Sky, CPO Glenn Cramer and K9 Waylon, CPO James Patrillo and K9 Bailey, and CPO Mark VanDyke and K9 Avery to form the complete K9 unit of nine K9 teams. 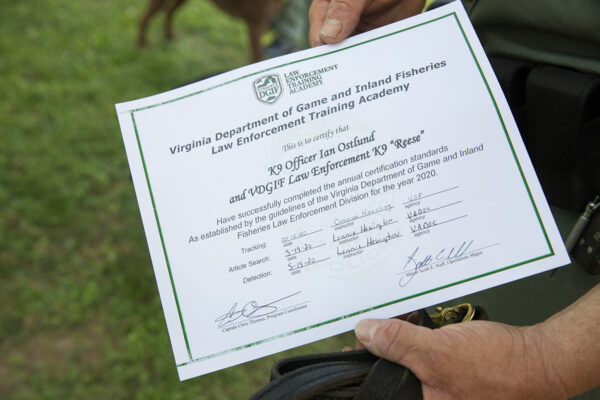 “The additional officers give us a strategic coverage of the entire state now,” said Major Scott Naff of the DGIF Conservation Police. “We are able to have K9s respond to officers everywhere in the state. When we only had five K9s, there were some areas that were under-served by the K9s. With adding these five, we were able to address our Northern Virginia and Tidewater needs, as well as Southside Virginia and the Shenandoah Valley.” 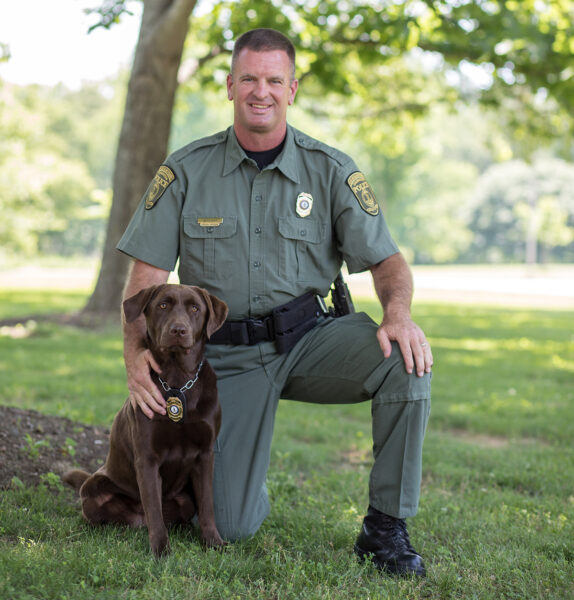 Read all about the K9s’ training and progress in previous posts.

And make sure to also read the September/October issue of Virginia Wildlife magazine for more about the DGIF K9 CPO program!

The DGIF K9 program is supported by the Ward Burton Wildlife Foundation (WBWF). You can help by donating to the Caring for the CPO K9s Fund through WBWF. Your donation will go to veterinary care, maintenance costs, and training for the K9 CPOs. 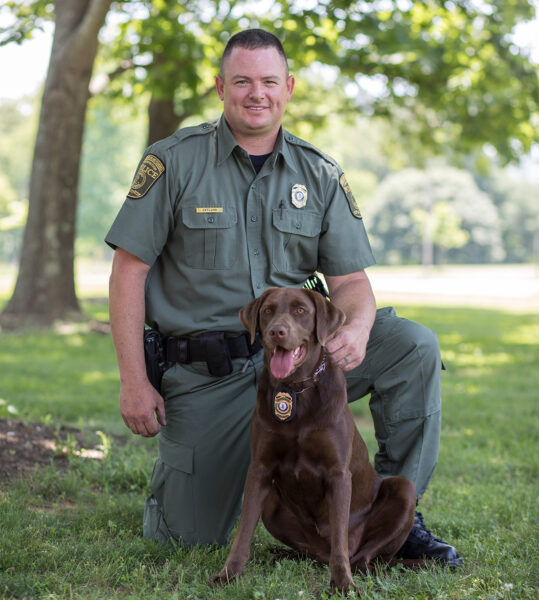