From Delicacy to Decline: A Tale of the Diamond-Backed Terrapin

The Northern diamond-backed terrapin has played an interesting role in the culture and history of Virginia’s shore over the centuries. 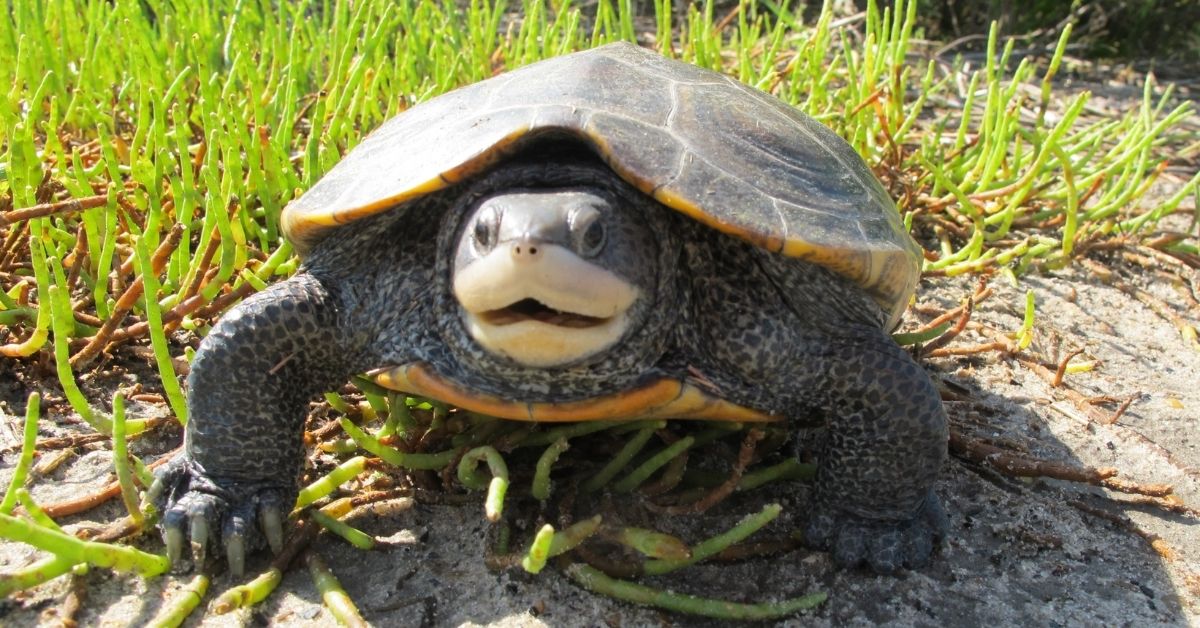 This female Northern diamond-backed terrapin was on land searching for a nest site. Her "lips" are actually jaws well-adapted to crush mollusks such as periwinkles. Photo by J.D. Kleopfer/DWR

While coastal Virginia is nationally known for its crabs, oysters, and other seafood, another resident, the uncelebrated Northern diamond-backed terrapin (Malaclemys terrapin terrapin), has also performed a colorful role in our history.

The Northern diamond-backed terrapin is strictly an American animal, one that fed indigenous people for centuries and was then shared with European colonists when they arrived in the early 1600s. It has thrived in our waters, but it once was nearly extirpated. On Virginia’s coast, the diamond-backed terrapin has been both revered and reviled as it threaded its way through our food culture.

According to the Virginia Herpetology Society, the Northern diamond-backed terrapin is commonly found in 11 Virginia counties and seven cities, all in the Chesapeake Bay region and on the Eastern Shore. This is North America’s only species of brackish water turtle. The scientific name terrapin means turtle, and is derived from the Algonquin Native American word “torope,” which means “edible turtle.” 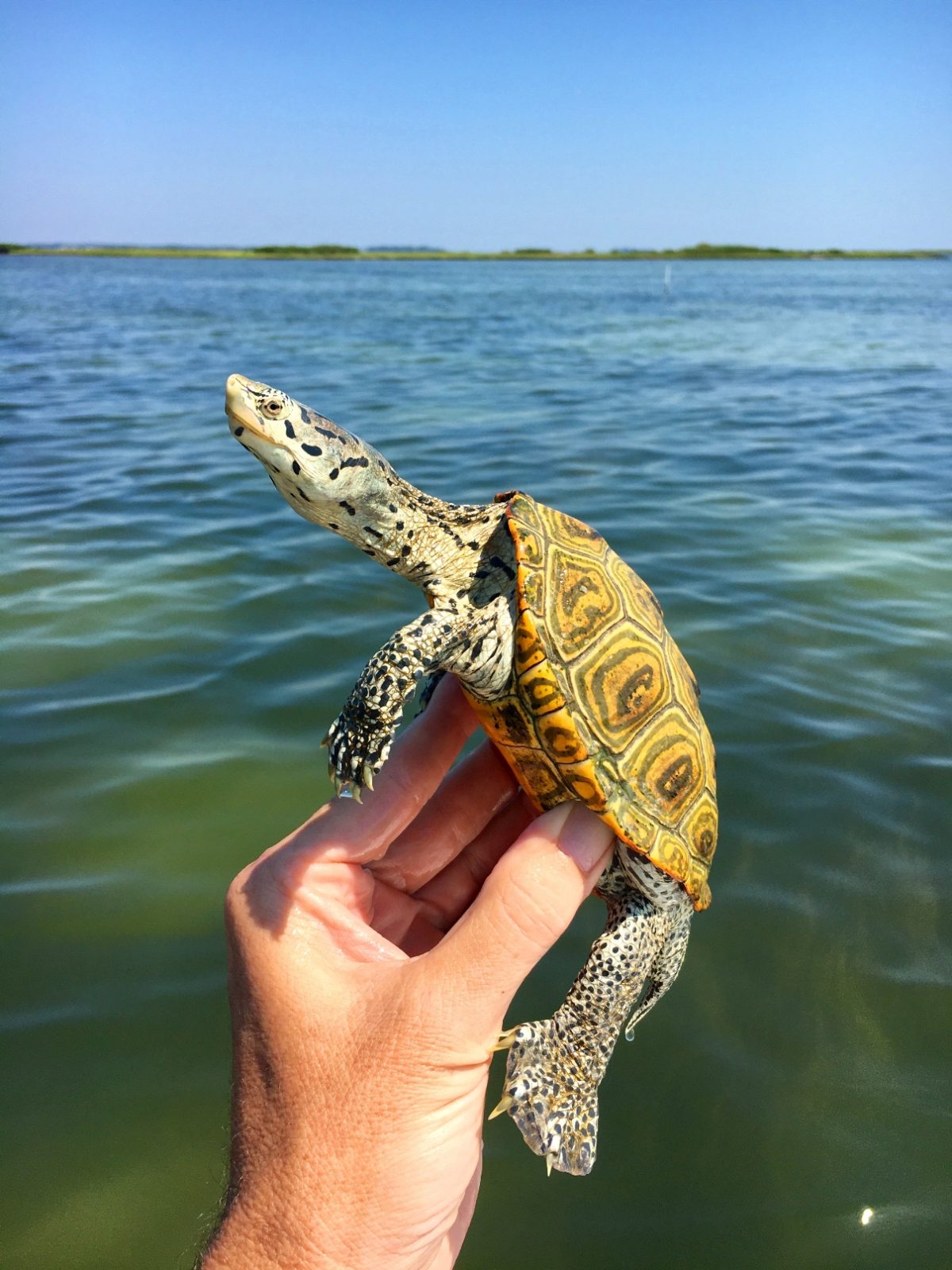 The Northern diamond-backed terrapin is Virginia’s only true estuarine turtle, living in brackish rivers, creeks, bays, and streams along the Chesapeake Bay and the seaside of the Eastern Shore. It nearly became extinct a century ago because of overfishing, and today it remains a species of concern with a Virginia Wildlife Action Plan rating of Tier IIa because of habitat loss, incidental capture of juveniles and adults in crab pots, egg predation by mammalian and avian predators, and road mortality of females as they search for suitable nest sites.

Prior to the Civil War, terrapins were plentiful and commonplace. Plantation owners provided them as food for enslaved peoples as an alternative to pork. George Washington used terrapins to feed the troops at Yorktown when supplies were running low, and it was common for farmers to feed terrapins to chickens and pigs.

Terrapins were part of the rural fabric of the Eastern Shore and other communities along the bay. They were a reason for people to get together and share food and fellowship.

Benjamin Azariah Colonna was born on October 17, 1843 on a farm near Pungoteague in Accomack County. Late in his life he wrote a narrative about terrapin suppers, a winter social function popular during the years following the Civil War. Farmers would get together and have terrapins that had either been boiled in water or roasted over coals. It was the guests’ choice as to the cooking method.

“Each man would mix up his terrapin thoroughly in the shell and season it to suit his taste and proceed to eat it with knife, fork, and spoon right out of the shell,” wrote Colonna. “They used liberal quantities of butter in the terrapin along with other things to suit their taste. Whiskey and coffee were passed around and the supper eaten with great gusto.” Colonna added that card games usually followed the terrapin supper and typically lasted until the early morning hours.

But the tide shifted. An article on terrapins in Forest & Stream magazine in 1899 said that over a period of a few years, terrapins went from selling for one dollar for an oxcart load to as much as $160 for a dozen. The reason, of course, is that terrapins were discovered by restaurants in eastern cities, and demand skyrocketed over a relatively brief period of time. This was stimulated chiefly by the New York, Philadelphia, and Norfolk Railroad, which opened a line on the Eastern Shore in 1884, making travel from eastern cities to the Shore relatively quick and easy.

City dwellers visited the rural peninsula, discovered terrapin stew, and spread the word, with nearly disastrous results. This led first to overfishing of the natural population of terrapins, and eventually to a proliferation of terrapin farms, where thousands of terrapins would be raised in captivity to satisfy the demand of the restaurant trade.

It would be fair to ask how a humble reptile that once was used as emergency rations for troops achieved its elite menu item status. The answer is that when Washington’s enlisted troops and the plantation enslaved peoples were fed terrapins, they were likely roasted in their shell over a bed of coals. If they were lucky, the recipients might have been provided a dollop of butter for seasoning.

Restaurants prepared terrapin dishes with profuse amounts of cream, butter, liquor, egg yolks, and spices. If I gave you my gardening shoes and you slow-cooked them for two hours, then cut them into bite-size pieces and prepared them according to a terrapin recipe from a late 19th century cookbook, you would get a three-star rating from Michelin.

On the Way Back

Of course, in order to have a terrapin supper it was necessary to know how to catch terrapins, and this was a skill, like fishing and clamming, that most people who lived on the rural coast developed early in life. Colonna said he would go out in his skiff early in the morning in late fall when the water was clear. 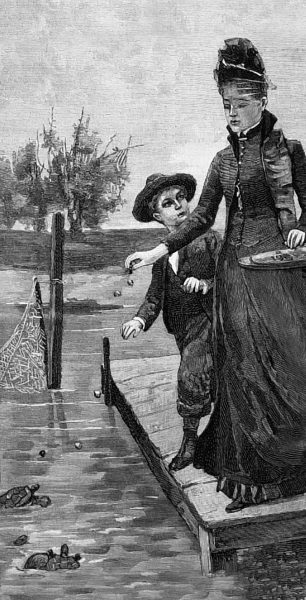 This etching from 1888 shows a woman feeding terrapins at a so-called “farm.”

“An expert at taking terrapin will select some quiet morning after a northwest blow, and before the water has a ripple on it will be out with his tongs looking at the bottom of the creeks. To one unaccustomed to this business, the bottom would look the same everywhere; but an experienced man will observe a number of prints on the bottom which look something like a horse’s footprints. Under such a sign there will always be a terrapin, the bigger the sign, of course, the bigger the terrapin. But big or little, it was not extraordinary luck to take from 50 to 80 terrapin in one morning, while with exceptionally good luck I have known them to take more than 150.”

As the wild populations dwindled due to over-harvest, terrapin “farming” sought to meet the demand for a few years. But the term “terrapin farm” was quite a bit misleading. Terrapins are slow-growing animals, and they take years to reach marketable size. It simply was not feasible to raise thousands of them in a confined setting for an extended period of time. It was more a matter of wild terrapins being caught and stockpiled in pens until they could be sold, which further advanced the species’ slide toward extirpation. Another factor in the decline in popularity of terrapin as a menu item in the early 20th century was Prohibition, which made the addition of liquor to the cooking difficult.

Over the decades, the populations of Northern diamond-back terrapins gradually recovered. Multiple states in the Chesapeake Bay area have passed legislation to protect them. While their numbers aren’t what they were in the 19th century, now it’s common to paddle a canoe up a remote creek and see their heads popping up around you.

The greatest threat to Northern diamond-backed terrapins today is loss of nesting habitat from sea level rise, especially sandy beaches with a gentle berm that are vital to them in the spring when they lay eggs. As waterfront property is being developed, sandy beaches are disappearing and being replaced by bulkheads, rock walls, and other hardened shorelines. Terrapins simply cannot nest there.

Recreational and commercial crab traps are also a threat to Northern diamondback terrapins, as the animals can get caught and drown in the traps. The Virginia Institute of Marine Science (VIMS), the Virginia Department of Wildlife Resources (DWR), and other organizations have worked to help encourage the use of by-catch reduction devices (BRDs), which keep terrapins from entering the traps. 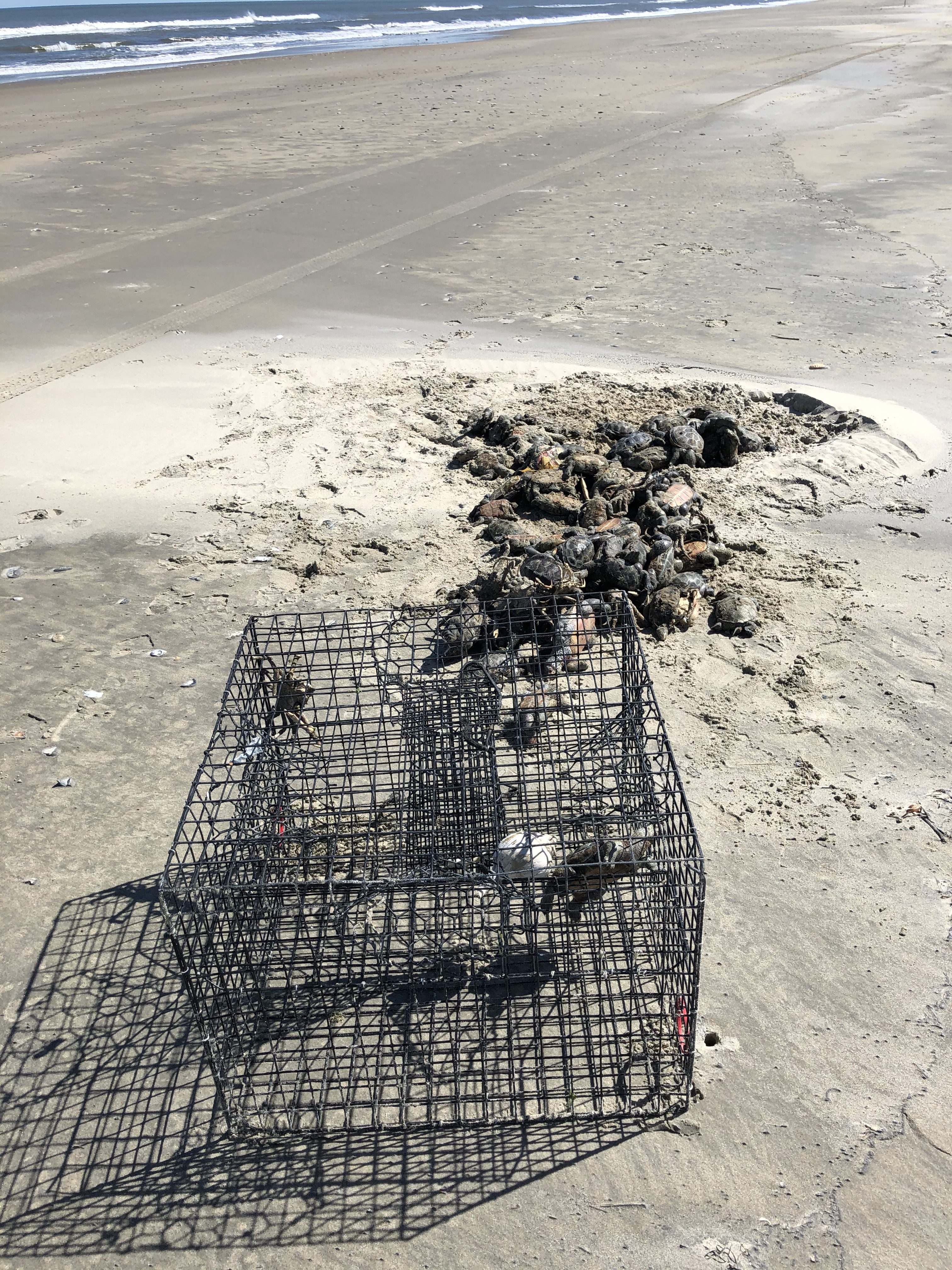 There is a ban on the possession of Northern diamond-backed terrapins in Virginia and there is no longer a commercial harvest.

About the Northern Diamond-backed Terrapin

Freelance writer Curtis J. Badger has written widely about the natural and human history of the coast. His most recent book, Letters Home, written with his wife Lynn, is a collection of letters written by family members during the post-Gold Rush days in California to family back home in Virginia.