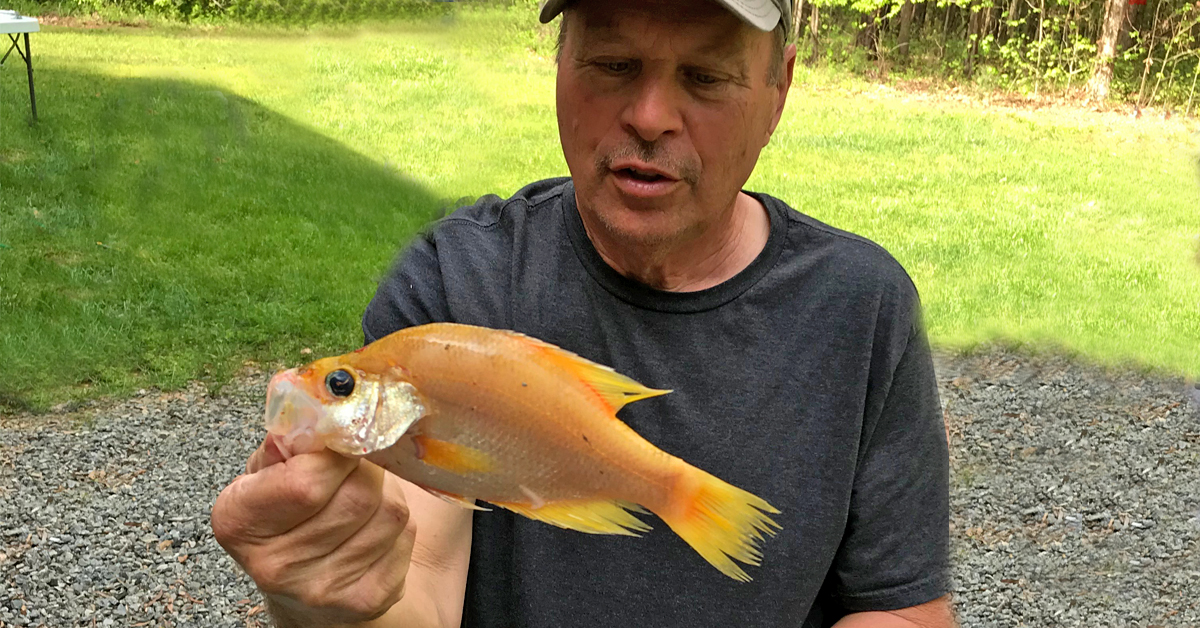 David Rathburn holds his golden crappie catch of a lifetime.

Photos by courtesy of David Rathburn

A lucky angler reeled in an unusual catch on Virginia’s famous Buggs Island Lake. On Easter Sunday, April 12, David Rathburn of Staunton couldn’t believe the golden fish that was swimming at the end of his line. Rathburn had already caught 15 crappie that afternoon fishing with a Kalin grub on a 1/8 oz. jig head.

“I have been fishing Buggs Island Lake for 50 years and I always target crappie in the spring,” said Rathburn. He said that day the fish were holding off bridge abutments and were suspended midway in the water column in about 15 feet of water.

Soon he came tight to another fish off the abutment. The water was fairly clear that day and when the fish got to within three feet of the surface he saw the colors. With a gold flash and glowing, the most unusual crappie he had ever seen was on the surface in front of him.

“What in the world is that?” Rathburn recalled thinking. “I was shocked because I didn’t think it could possibly be a crappie.” Rathburn had caught the fish of a lifetime, a golden crappie.

“Golden crappie are extremely rare and most anglers have never seen them, let alone heard of them before,” said Alex McCrickard, Virginia Department of Game and Inland Fisheries (DGIF) Aquatic Education Coordinator. “The fish is a product of a genetic mutation that alters the skin pigments called xanthism. Yellow pigmentation dominates in xanthism, as you can see in Rathburn’s golden crappie.”

Dan Michaelson, DGIF Fisheries Biologist, was also surprised about Rathburn’s catch. “I have been working on Buggs Island Lake since 2001 and have put my hands on a lot of fish in that time. This is the first time I’ve seen or heard of a golden crappie being caught at Buggs Island,” said Michaelson.

“While this unique golden color isn’t unheard of in crappie, it certainly isn’t common. Consider also that as a fish matures they do everything in their power to avoid being eaten,” said Michaelson. “Often cryptic coloration or camouflage is a fish’s first line of defense against a predator and being a bright, gold color doesn’t lend itself well to a long life.  This is definitely a unique catch and one that I’m glad I got to see!”

Rathburn plans to mount the 9.5-inch trophy golden crappie. “It’s definitely in my top three catches of all time,” he said. “It will be mounted and hung alongside a five-pound smallmouth bass and a three-pound white crappie here at home.”