Catch the Rain and Clean the Water: Rain Gardens and Living Shorelines for Wildlife 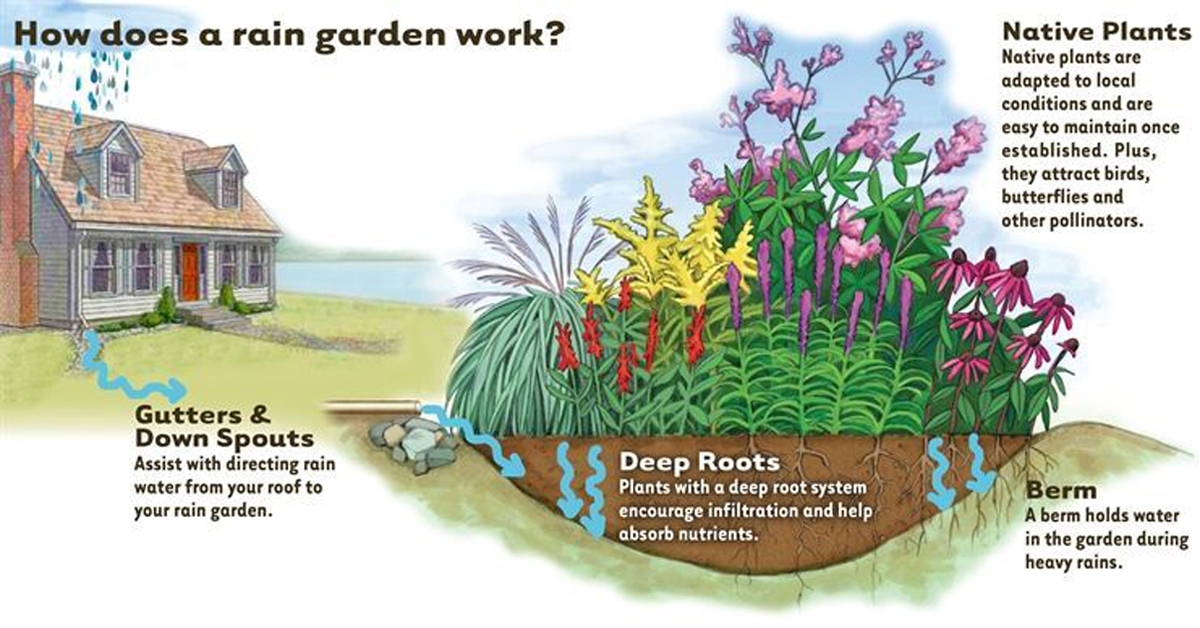 A rain garden has a bowl-like shape, permeable soil that drains well, and native plants that can handle alternating periods of wet and dry conditions.

Photos by Carol A. Heiser

Rain can be a blessing when it falls gently, moves slowly through lush vegetation, and soaks gradually into the soil.  At other times, when the sky opens up and releases a deluge, the energy and volume of downpours can pose significant problems as water collects and runs off the land with high velocity.

Regardless how much water falls in any given event, each flush of rainwater can carry a load of soil particles from eroded areas and deposit them as sediment in waterways further downstream. Sediments cloud the water and eventually deposit on streambeds, interfering with the life processes of aquatic organisms that call the streambed home.  Even more damaging are additional pollutants from our yards, driveways, roads, fields and parking lots that hitch a ride on the raindrops and get carried along with the runoff. 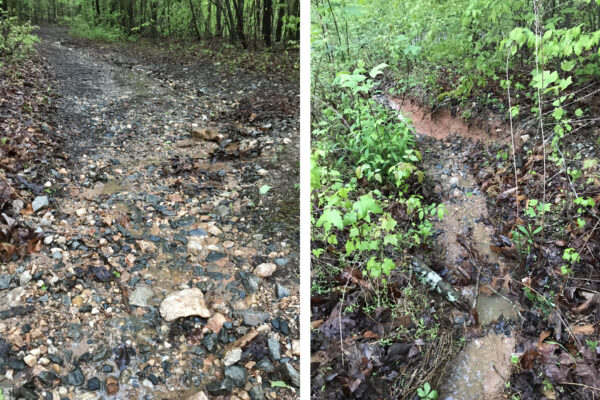 Gullies form when roadways are improperly maintained.  High volumes of water can run off the ground very quickly after a storm event, cutting through the roadbed (left) and then washing out soil from adjacent drainages (right). 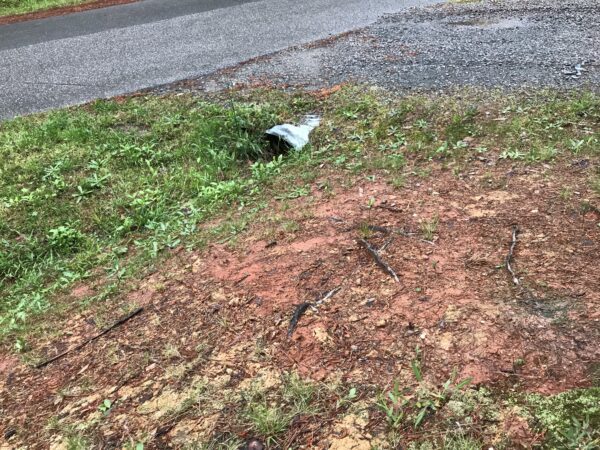 When ground cover is lost because of improper mowing and compaction, the exposed soil can easily run off directly into the nearest culvert pipe. 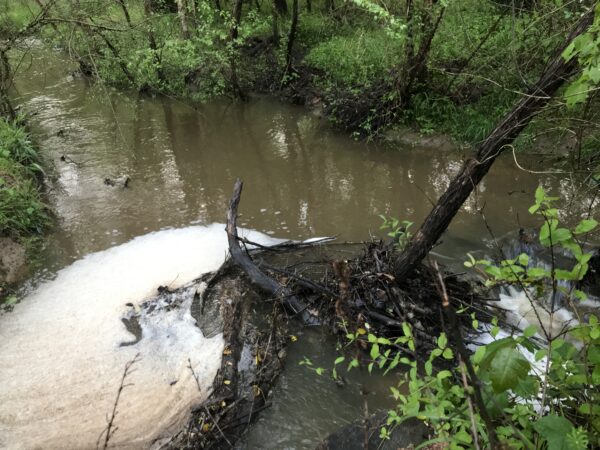 The resulting sediment is carried into creeks and streams where it clouds the water, blocks sunlight, and interferes with the aquatic vegetation and wildlife living there.

Every time we wash our car, pump gas into the tank, salt the sidewalk, or spray insecticides or herbicides on our gardens, we add pollutants to the environment that will potentially be washed off the land during the next storm.  These guilty molecules of excess nitrogen and phosphorous from landscape fertilizers and bacteria from pet waste, combined with heavy metals, petroleum and other toxic chemicals that leak onto roadways from our vehicles, can contaminate local waterways and have a detrimental impact on the water quality that fish and other aquatic wildlife rely on to survive. 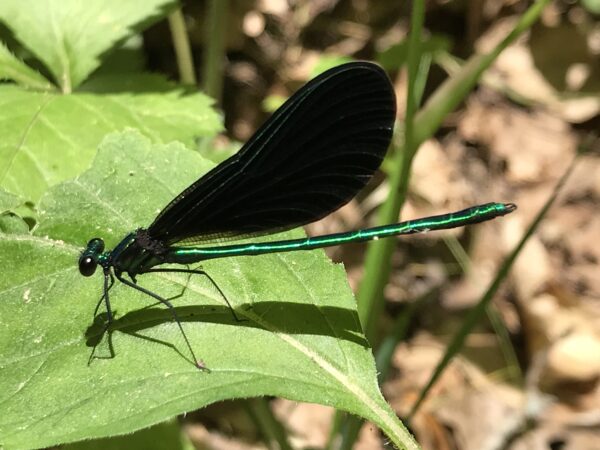 An ebony jewel wing damselfly rests on the vegetation near a freshwater stream.

Rain Gardens to the Rescue

One of the best ways to combat the problem of uncontrolled runoff and the pollution it carries is to install a rain garden, also known as a “bio-retention” best practice.  A rain garden is a bowl-shaped depression in the ground that’s filled with vegetation (which provides the biological or “bio” part of the name), and whose overall size is specifically designed to hold water for only a short period of time after a storm event, usually no more than 72 hours – hence the “retention.”

Depending on how permeable the soil on a site is, a rain garden basin may be constructed with the existing soil or with specially engineered or amended soil that will drain well. A berm of soil and rock on the downslope side of a rain garden facilitates water collection, and the ponding area is usually only about 6 to 12 inches deep. 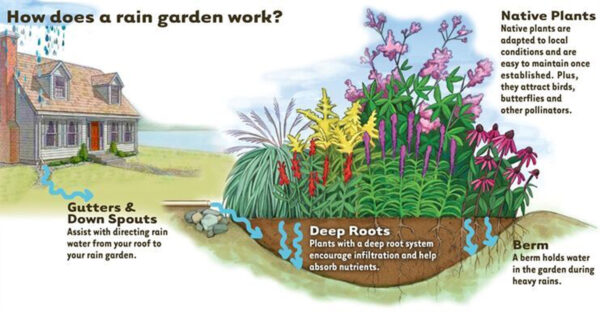 It’s important to note that a rain garden is not a water garden. A water garden is a permanent body of water that’s recirculated by a pump, whereas a rain garden only collects water during storm events. The goal of a rain garden is to capture the first inch of rain, which is typically the dirtiest. A one-inch rain storm produces 13,000 gallons of water over a half-acre lot: enough to fill a swimming pool! As the water soaks down into the rain garden—a process that’s vital for recharging groundwater aquifers across the watershed—the garden gradually dries out and will stay dry until the next storm comes along. Groundwater recharge via rain garden is up to 30 percent greater than in a conventional lawn.

Native plant species, including grasses, perennials, shrubs and trees, are installed within the rain garden depression and also along the surrounding slopes and edges, chosen for their adaptability to the varying moisture regimes. Plant roots intercept and filter the water, while the soil particles within the basin, as well as the mulch on top of the bed, all serve to absorb pollutants like heavy metals and hydrocarbons. In this way, rain gardens mimic the hydrologic function of a natural system, such as a forest habitat, where the vegetation and spongy leaf litter would absorb excess water and allow it time to percolate into the soil.

Rain gardens are very effective at boosting the habitat diversity of your landscape, especially when located within or near large areas of conventional turf grass, which have very little wildlife value. The mixture of groundcover, flowering plants, and shrubs in a rain garden can become an oasis for insects on the lookout for food, or birds ready to build a nest, or small mammals or amphibians seeking temporary shelter.

Regardless of size, such as the large neighborhood garden at left, or the smaller residential garden at right, a rain garden planted predominantly with native species will provide invaluable habitat to a variety of pollinators, birds and other wildlife species. Photos by Beth Ginter 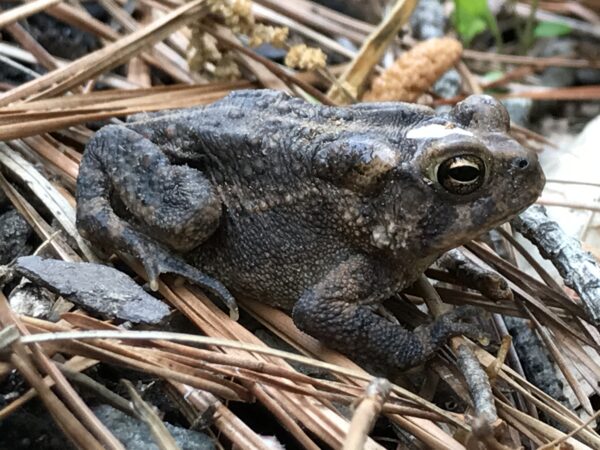 A toad finds cover on a sunny day.

Rain gardens aren’t the only way to catch and filter polluted water before it enters a body of water. Restoring or maintaining a wide strip of healthy vegetation next to riparian zones such as creeks, streams, and rivers is a fundamental way to “buffer” or intercept and filter contaminants in the run-off that would otherwise flow directly into the waterway. 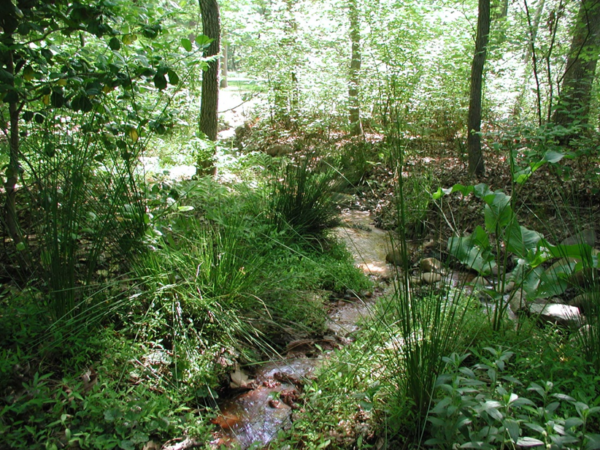 A shoreline that’s protected by a living layer of vegetation will slow the effects of flooding, be more likely to hold the soil in place along the streambank, and provide a greater amount of space for minimizing stormwater damage. Living shorelines made up of complex plant communities provide critical habitat for a multitude of wildlife species, including songbirds that feed on fish or aquatic insects, waterfowl that need stopovers during migration, and aquatic animals that require mud or streamsides for nest-building or denning.

For example, the Elizabeth River Project has a short video of a successful streambank buffer planted by a homeowner who participated in their River Star Home program.

The wider the better!  A buffer of at least 35 feet is recommended, and 75 to 100 feet will be much more effective. By protecting the edges of streams and rivers with native grasses and other flowering plants, you can make a big difference in reversing habitat losses facing wildlife today. 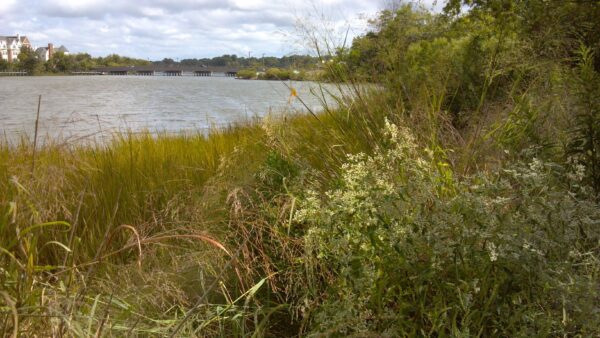 A living shoreline and buffer of water-loving native grasses and shrubs at the Virginia Zoo in Norfolk. Photo courtesy of Wetlands Watch, Inc.

Resources for Getting Started