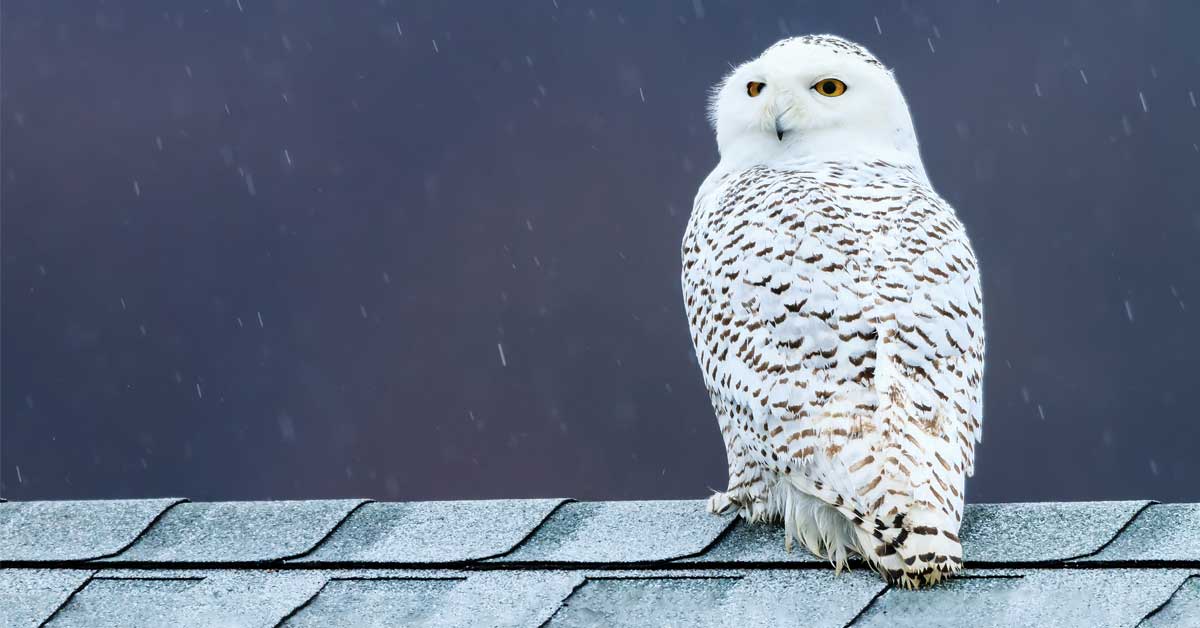 In the dead of winter 2015, people lined up spotting scopes all day long just north of Reagan National Airport’s runways, transfixed by a snowy owl (Bubo scandiacus) patiently perched under arriving and departing planes. Others stood for hours in JC Penney’s Springfield Mall parking lot where another snowy owl sat on the roof for hours, mostly immobile and unfazed by the local “paparazzi.”

In 2013-14, Virginia had what retired biology professor Clair Mellinger calls “a snowy owl invasion.” Snowies were recorded all over the state in “numbers not seen in a century or more,” observed Bryan Watts. The year 2013 was “like a tsunami” that gave Virginians “an adrenalin rush,” he observed in a William and Mary College Center for Conservation Biology blog. Ornithologists call this phenomenon an irruption.

Few people see owls in their lifetimes, so to see a bright, white Arctic bird in Virginia is a thrill for birders and non-birders alike. Colin Surovell, then age nine, marveled, “That snowy owl was way cooler than a crow.”

The over 220 or so owl species in the world have intrigued people for millennia. At times called “ghost birds,” owls are largely nocturnal and to some people, seem mysterious, stealthy, and even spooky. They hoot, hiss, howl, wail, yowl, and scream. To the Romans, owls presaged death. For the Greeks, owls portended military victory. Owls are common nursery rhyme themes and school mascots. “Owls are icons for everything from potato chips to cigars,” Virginia expert John Spahr says.

Owls live on all continents except Antarctica and are found in many habitats: suburbia, forests, farms, high desert steppes, the tropics, and polar regions. The elf owl (Micrathene whitneyi) in the western United States weighs around 1.5 ounces; the Eurasian or European eagle owl (Bubo bubo) can weigh up to 9.3 pounds.

Four owl species regularly nest in Virginia. Short-eared and northern saw-whet owls, common winter residents, are also known to breed in the state. People see a few additional species, but there’s never been a statewide survey of all species, says Jeff Cooper, a biologist who specializes in raptor research for the Department. Surveying owls is challenging. Most are excellent at camouflage and primarily active at night.

Owls have several special features or adaptations. Their satellite-dish-shaped face funnels sound to their asymmetrical ears, positioned to help determine where sound is coming from. With supersensitive hearing, owls can pick up the sounds of prey rustling on the ground or a mouse digging under two feet of snow.

Unlike most birds with eyes on the sides of their heads, owls have large eyes that face forward, like human eyes, and probably ten times better. Their tube-shaped eyes help them see faraway objects. Owls have nictitating membranes that help block dust. To see at their sides, owls must swivel their heads, and most can turn their heads 270 degrees.

Owls have comb-like, primary flight feathers on their large wings’ leading edges enabling silent flight and stealthy approaches. Their talons are curved and sharp, adapted to seize and squeeze prey. Their leg and foot bones are especially stout for landing hard on prey.

An owl’s beak curves downward, unlike most other raptors with protruding beaks. Mice, shrews, voles, and small birds are their most common prey. Adults eat their prey whole and regurgitate indigestibles, like bones and feathers, as a pellet. They can tear large prey apart, gulp down pieces, and take pieces to nesting owlets. 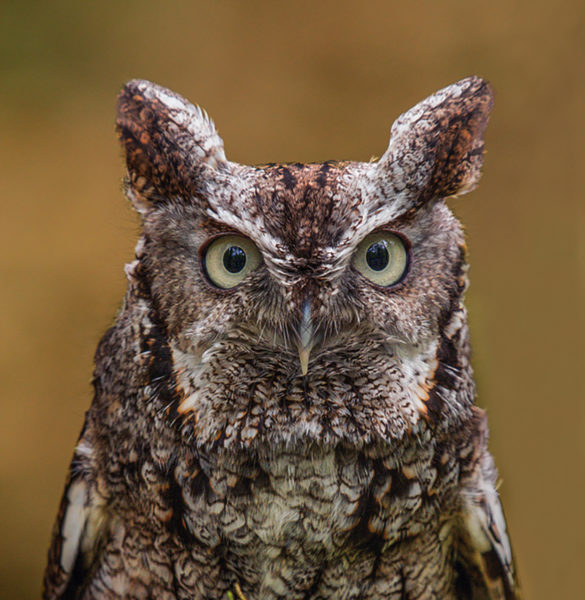 The eastern screech owl (Megascops asio) is one of the most common owls seen in Virginia, “ubiquitous,” reports Spahr, adding, “not that they are that easy to see.” They are 8.5 inches in length and weigh around six ounces. Masters of disguise, the owls’ plumage blends in with the tree bark of the holes and hollows of trunks where they spend much of the day. Some are reddish brown, while others are gray.

If you think you hear a horse whinnying in the spring, it’s likely screech owls pairing up, says Spahr. Their name comes from their screeching call. Spahr has done nocturnal surveys and monitored nest boxes in Highland County for about five years to understand the relative distribution of the red and gray morphs. He estimates that in Virginia around 60 percent are red and 40 percent, gray. “These projects have yielded hundreds of encounters with this attractive little owl and have given me some insights into the how, what, when, and where of searching for this species and potential breeding documentation,” he offers. 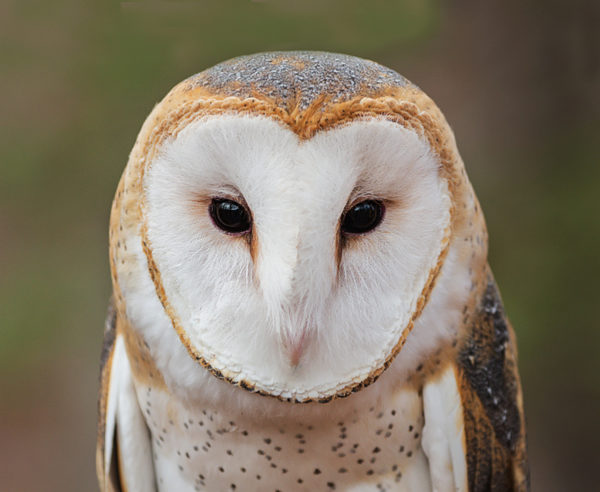 Barn owls (Tyto alba) have a distinctive, heart-shaped face, earning this species the nickname “monkey owl.” They have a white underside, long legs, and several calls—a bark, hiss, and click trill. They weigh about a pound and are 16 inches long.

Barn owls usually hunt over open fields at night. According to Cornell University’s All About Birds, “The barn owl has excellent low-light vision and can easily find prey at night by sight. But its ability to locate prey by sound alone is the best of any animal that has ever been tested. It can catch mice in complete darkness in the lab or hidden by vegetation or snow out in the real world.”

Cooper surveyed barn owls for many years in central Virginia and says they are relatively common in Orange and Culpeper counties. He installed nesting shelves in barn silos, monitored the birds’ activity, and banded chicks. Cooper dubs them “wacky birds,” because they can have young at any time of year.

While some nest in natural cavities in hollow trees or in river banks, like those of the Rappahannock River’s Fones Cliffs, Cooper says that barn owls are almost solely dependent on artificial structures. These can include barns, abandoned buildings, church steeples, bridges, and tunnels. Traditionally, “barns were easy for them,” but today Cooper is seeing older silos with an open ledge at the top being replaced with tank-type silos without ledges. Because of their declining population, the state lists the barn owl as a “Tier III, Species of Greatest Conservation Need” in its Wildlife Action Plan. 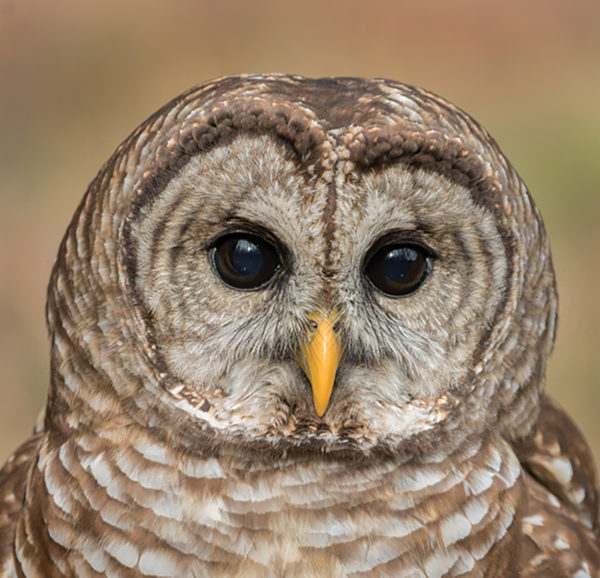 Barred owls (Strix varia) are more heard than seen, known for their haunting, baritone night call, “who cooks for you, who cooks for you-all.” They get their name from their “bars” or striped plumage.

Around 21 inches in length and a little over a pound, they are one of the few owls that people see during the day, but generally, they roost during the day and hunt at night. They tend to be in older forests but are highly adaptable to varied habitats, including mixed forests and disturbed areas. “Barred owls are the opportunists of the owl world,” wrote Leigh Clavez in The Hidden Lives of Owls. 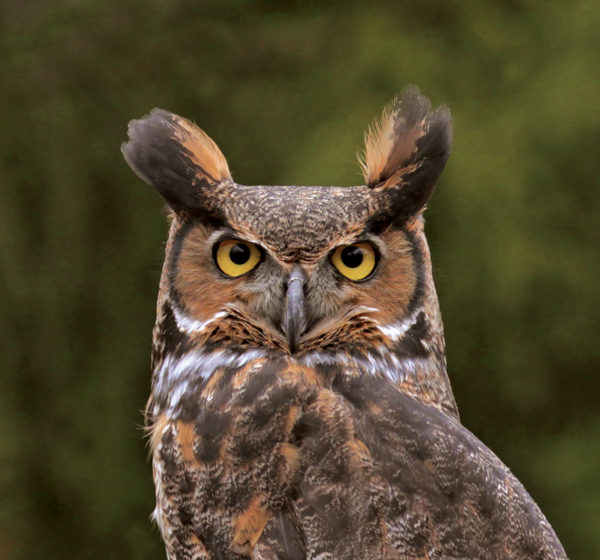 Great horned owls (Bubo virginianus) have no horns, but with long feathered tufts on their heads, an intimidating stare, and hooting voice, this is the owl every schoolchild would likely draw if tasked.

Among owls, they are big, at 22 inches in length and three pounds in weight. Considered to be widespread, great horned owls prefer undisturbed habitats and forests, but are also found in wetlands, grasslands, and other semi-open habitats. Because they have excellent night vision and are ace hunters (they can take large raptors, skunks, rabbits, snakes, even porcupines), they’ve been called “tigers of the sky.” Their deadly grip can sever the spine of their prey. 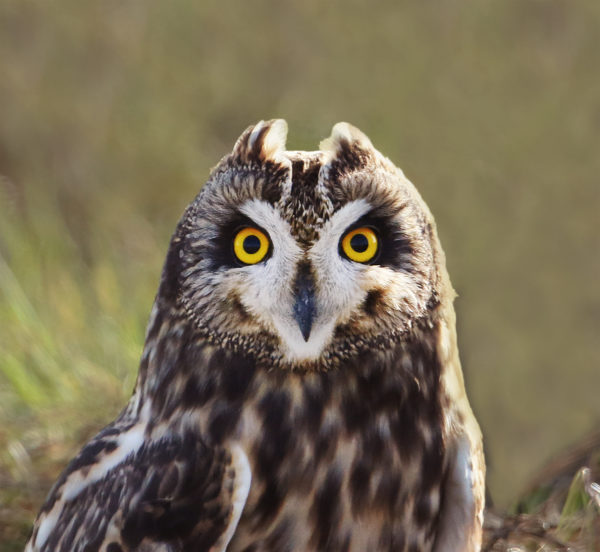 Short-eared owls (Asio flammeus) are uncommon to rare in Virginia, but are known to breed here. They are most often seen outside the breeding season, in places like the UVA’s Blandy Experimental Farm in Boyce, in Tazewell, Culpeper and Orange counties and at DGIF’s Saxis Wildlife Management Area, among others. Their small ear tufts are often invisible. Heavily streaked overall with a whitish face and yellow eyes outlined in black, they are 13-16 inches long and weigh seven to eight ounces. They prefer open areas like marshes, meadows, and fields and hunt during daylight low over the ground. 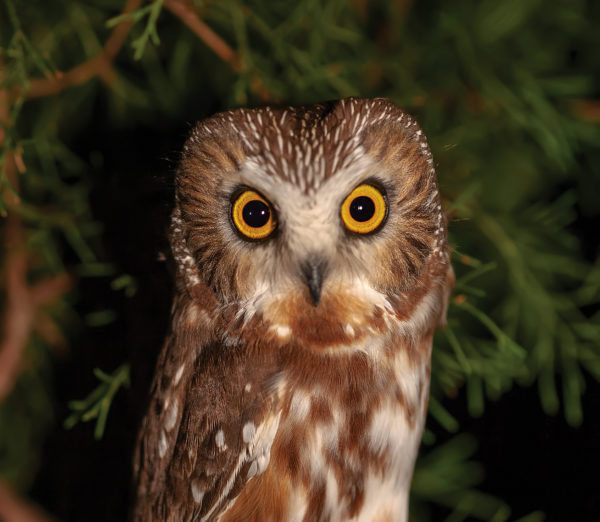 Several Virginians are studying the state’s most elusive owls. Northern saw-whet owls (Aegolius acadicus) are Virginia’s smallest breeding owl. At seven to eight inches in length and weighing two to five ounces, they have bright yellow eyes and a cat-like face. The male’s shrill breeding call sounds like sharpening a saw blade on a whetstone; hence their name. They are highly nocturnal and masters at avoiding notice.

The northern saw-whet is one of the most understudied birds in the state, says Dr. Ashley Peele, coordinator of Virginia’s second Breeding Bird Atlas. Jay Martin of the Blue Ridge Discovery Center concurs: “Not a lot is known about it in this range, this far south.” Virginia’s Wildlife Action Plan lists them as a Tier I, Species of Greatest Conservation Need.

To better understand this little gnome of a bird, several Virginians are banding saw-whets. Martin is surveying the saw-whet population on Whitetop Mountain and Mount Rogers, in coordination with DGIF and the U.S. Forest Service. He gathers field data to eke out the differences in forest types between occupied and unoccupied habitat. He is also mapping breeding and wintering ranges. “The Northern saw-whet owl is the perfect charismatic species to inspire a broad range of people to appreciate the biodiversity of the Blue Ridge,” he argues.

Liberty University’s Dr. Gene Sattle has banded over 400 migrating saw-whets near Lynchburg, and Clair Mellinger, a retired Eastern Mennonite University biology professor, has banded over 1,700 saw-whets moving through Virginia since 2001. His team catches from 50 to 300 birds every November in Rockingham County, with a five to ten percent recapture rate.

These biologists are analyzing migration timing, differences in magnitude of flights among years, and differences in timing and movement among age and sex classes. “The exciting part is that there are a lot more owls around than we thought,” says Mellinger.

At the Blandy Experimental Farm in 2015, Judy Masi heard some “little birds going crazy,” says her husband, Dr. David Carr, Blandy Director. Carr soon learned that the birds were aroused by an unexpected visitor, a long-eared owl (Asio otus) perched in a dense arborvitae near a building.  The “Blandy” owl, presumably the same bird, returned the winter of 2016-17.  “It is extremely rare to find this bird in Virginia,” explains Carr. “We’re at the southern limit of where it winters in the East. It is an extremely secretive bird, highly nocturnal, and picks roosts hard to find.”

Long-eared owls are around 14 inches in length and weigh from 7 to 15 ounces. Their populations have fallen an estimated 91 percent in North America since 1970, reports Partners in Flight.

Habitat loss and fragmentation and human encroachment are the leading threats to owls. The habitats of mice, voles, and other small prey—typically meadows, fields, and grasslands—are vanishing. Climate change is altering habitat, ranges, and migration timing.

Owls can be injured or killed as they navigate the human-modified landscape. Many fly low over roadways or catch prey on roadsides, risking collisions with vehicles. Because they hunt at night, they are hard for drivers to see. Owls can also collide with fences and become tangled in the wire. They can die from ingesting poisons used to kill rats, mice, and other rodents. Some rodenticides can interfere with blood clotting and cause victims to bleed to death. At the Wildlife Center of Virginia, screech owls are the most common injured owl brought in, but the center also gets barred, barn, and great horned owls. In 2017, of 1,208 intakes, ten percent were owls.

And there’s the information gap. Peele puts it this way: “Nocturnal species are a perpetual challenge for bird conservation. Many volunteers may not feel comfortable walking a trail or driving rural roads at night to listen for owl hoots or whip-poor-will cries. This means that, at any given time, our understanding of the current distribution and status of owls, nightjars, or American woodcocks is incomplete at best.”  She invites help in filling in our knowledge of what she calls, “Virginia’s most mysterious bird species.”

Glenda C. Booth, a freelance writer, grew up in Southwest Virginia and has lived in Northern Virginia over 30 years, where she is active in conservation efforts.