What’s Going On With The Butcher Bird? 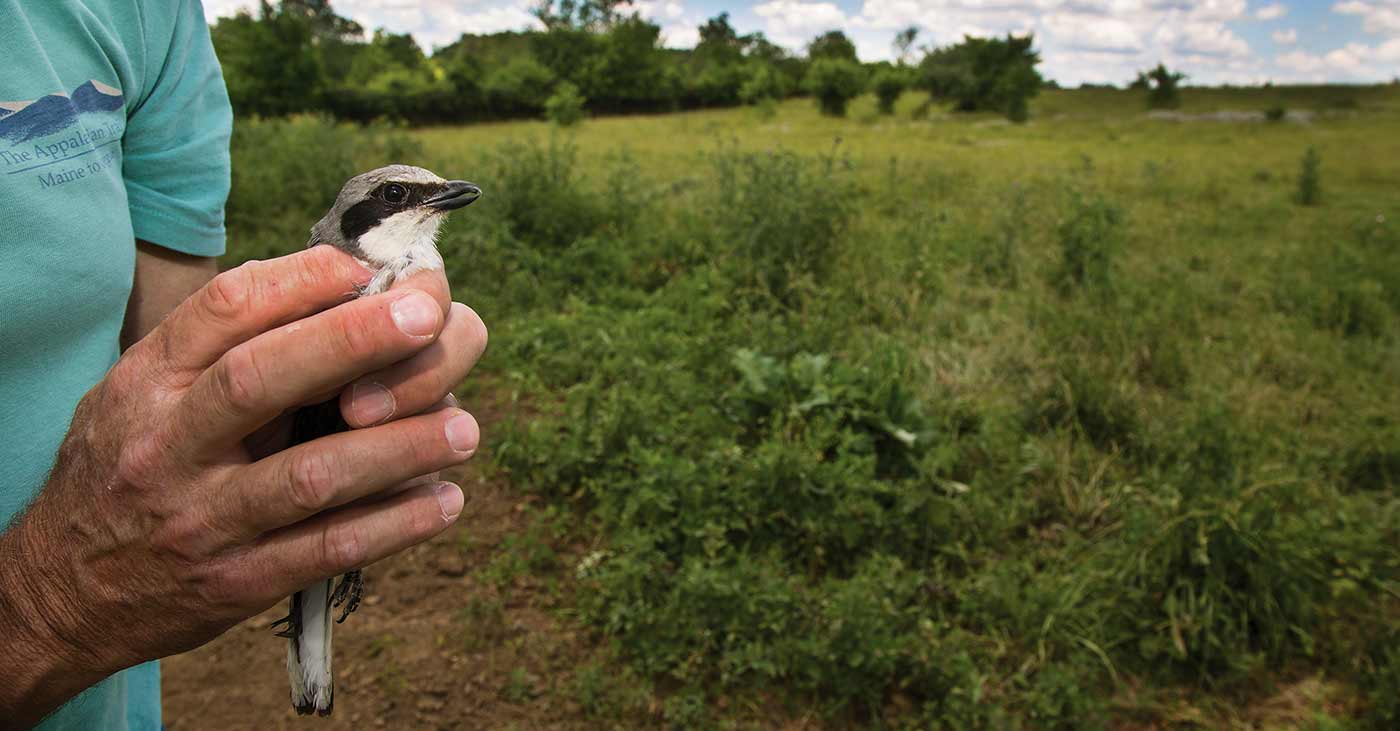 When she first arrived in Virginia and was hiking in Rappahannock County, Amy Johnson came upon a meadow vole impaled through its head. To determine what had happened, she took it to the Smithsonian Conservation Biology Institute (SCBI) in Front Royal. The answer: This hapless rodent had been caught and stabbed by a loggerhead shrike. Impaling its prey is the signature behavior of the loggerhead shrike, aptly nicknamed, the “butcher bird.” Amy chuckled, “It’s so much fun to find impaled things because you know a shrike is nearby.” 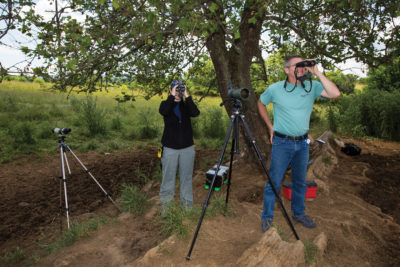 Warren Lynch and Priscilla Joyner scan the fields for shrikes and report by radio to Sergio Harding, who is waiting to place the live traps.

Loggerhead shrikes (Lanius ludovicianus) are nine-inch-long, stocky, thick bodied birds named “loggerhead” because their block shaped head is unusually large compared to the body. They have gray upperparts and a white breast and belly, white flashes in their black wings, and a distinctive black mask. They are often confused with Northern mockingbirds (Mimus polyglottos), but mockingbirds are slimmer with muted plumage, yellow eyes, and no mask. “Mockers” have slower, flappy wingbeats. A shrike’s flight can be fluttery or fast, rocket-like.

Loggerhead shrikes have thick bills with a small hook. The bill’s upper edge has pointy projections called tomial teeth for attacking prey. Shrikes behave like raptors, but lacking a raptor’s talons, shrikes catch their prey in their beaks and skewer them on a sharp thorn or barb or wedge them into tight spaces. After eating, they wipe the remains from their bills.

Throughout much of North America, loggerhead shrikes inhabit grasslands and open fields with scattered shrubs and trees where they wait on power lines, fences, signs, or other conspicuous perches and scan for rodents, insects, lizards, snakes, frogs, ground squirrels, and other birds. They favor habitats like farm fields, pastures, old orchards, scrublands, golf courses, and even cemeteries.

A bit to the south, in Augusta County, Bobby Whitescarver has been spotting shrikes since 2008 around his farm in Swoope. “It’s a beautiful bird and has unusual behavior,” he says. “I look for them all the time.”

Between 1966 and 2015, loggerhead shrike populations declined by a cumulative 76 percent over the bird’s range, Ontario to Florida, reports the North American Breeding Bird Survey. They are a “common bird in steep decline,” according to the 2014 American Bird Conservancy’s State of the Birds Watch List and the 2016 Partners in Flight Landbird Conservation Plan. Virginia lists them as state threatened and Virginia’s Wildlife Action Plan designates them a Tier I Species of Greatest Conservation Need.

Nongame Bird Conservation Biologist Sergio Harding, with the Department (DGIF), offers a cautious clarification: “Although the loggerhead shrike is still relatively common within much of the Southeast, it is an uncommon bird in Virginia due to population declines. Loggerhead shrikes may very well be extirpated within the United States north of Virginia. I consider Virginia and West Virginia together to be the strongholds for the species in the Eastern United States.” 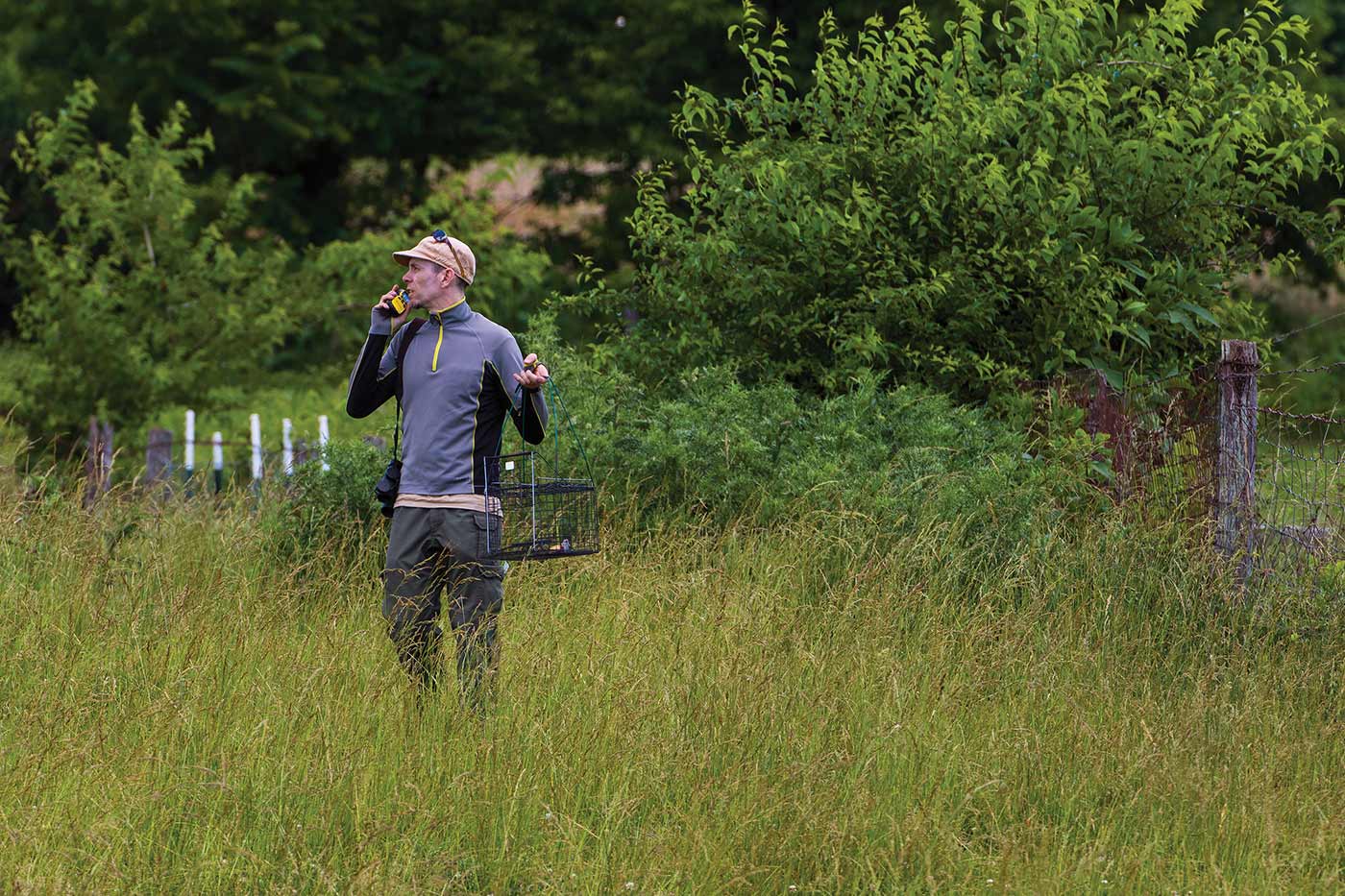 Harding radios spotters for the shrikes’ location before placing a trap containing a live mouse. (No mice were harmed during trapping of the shrikes.)

Often working with partners from other agencies, Harding traps and bands loggerhead shrikes in Virginia to analyze population characteristics, causes of their decline, and connections among populations in different areas. They are asking, for example, are the same birds they see at a site in the winter breeding at that site or are they replaced by different birds? Shrikes in Virginia include both year-round residents and individuals that might migrate.

To catch shrikes, biologists visit sites, listen for calls, and scan for birds perched or flying. Once they spot an unbanded shrike, they place a rounded, wire-mesh, cage-type trap in the shrike’s foraging area. The trap has doors on the top and side, and houses a live mouse as bait. Upon entering the trap, the shrike’s weight triggers the door shut, trapping the bird.

Harding attaches four leg bands: on one leg, a federal steel band and a color band; on the other leg, two color bands. In Virginia, they use a color band over the steel band on the right leg, with the color band changing every year. Each color combination is unique, so observers can identify individual birds. Through re-sightings, experts can analyze site fidelity, habitats, distribution, mates, movements, and migration patterns. To date, observers have re-sighted 13 of the 45 shrikes Harding has banded, some more than once.

Why study shrikes? “In the 1980s and 1990s, we concluded that the Virginia shrike population was too small and scattered to effectively study further in order to get at the causes of its decline,” Harding explains. “We now partner with several other states on a banding and monitoring project through the Loggerhead Shrike Working Group. This gives us a better opportunity to understand what is causing shrike declines by pooling our data with that of other states and examining the relationships between populations across political boundaries.

Banding with unique color combinations allows us to identify individual shrikes and can be paired with information on their reproductive status across years and on their movements. Collecting feather samples from these same shrikes allows us to better understand how different shrike populations are connected and from where they originate. Comparing declining populations to more stable populations may also help us understand the causes of declines.”

“Sergio is a one-man team for the loggerhead shrike in Virginia,” says Johnson. Harding banded shrikes in 2015, 2016, and 2017 in Clarke, Warren, Loudoun, Pulaski, Bland, Smyth, Russell, Tazewell, Cumberland, and Lunenburg counties. He hopes to expand to other areas.

The most he has trapped in one day? Five. “Trapping two is a good day,” he says. His work continues in 2018.

In 2016, a breeding loggerhead shrike was re-sighted in Ontario some 550 miles north of its Smyth County banding site. That same week citizen scientists in Augusta County videoed a banded, captive-reared shrike that had been released in Ontario in late August. In the past five to six years, two shrikes from Ontario have been re-sighted in Virginia. Collectively, these sightings point to a connection between the shrike populations in the two places, leading Ontario scientists to suspect that breeding population declines may be taking place on the birds’ southern, U.S. wintering grounds.

Warren Lynch manages a loggerhead shrike captive breeding population at SCBI to help understand the birds’ decline and stabilize the population. Since 2014, Lynch’s team has bred and raised 56 shrikes and released most in southern Ontario to augment the wild population in the province. “If not for the breeding and release program,” he says, “it is likely that this population would already have gone extinct.”

At SCBI, scientists pair shrikes through the winter and hope that around April, the birds start courting and nest building.   Lynch furnishes enclosures with shrike-friendly items like a bristling hawthorn tree, barbed wire, crickets, mealworms, and even exotic animal hair for lining nests. The hair can include cheetah, Mongolian horse, Persian onager, clouded leopard, red panda, maned wolf, and bison—nearby “neighbors.”  Researchers check nests with mirrors or ladders, count eggs, and monitor the new nestlings’ health. They hope to release birds into the local area eventually.

The VWL program complements DGIF’s work by teaming up with scientists, landowners, and non-scientists to monitor grassland bird populations, including shrikes, on private lands and developing a monitoring protocol.  VWL supports DGIF’s shrike work by monitoring current and historical sites, engaging private landowners, arranging for land access, and helping with trapping and banding. 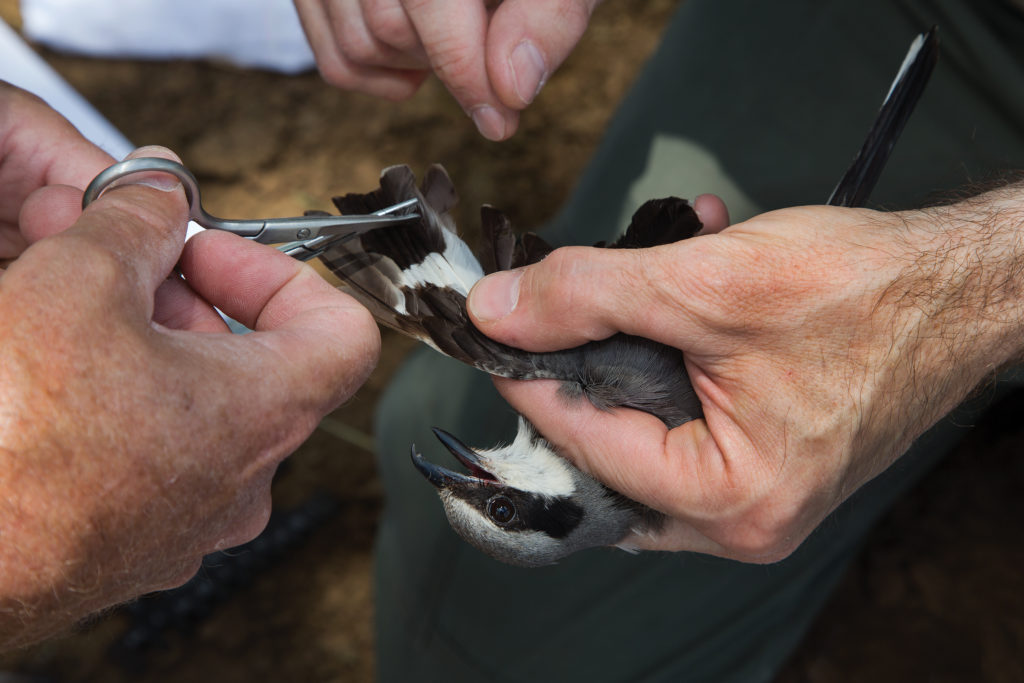 Afer a shrike is captured the team works quickly collectng DNA samples, banding, and measuring the bird before release. A tiny sample clipped from a feather provides important data. 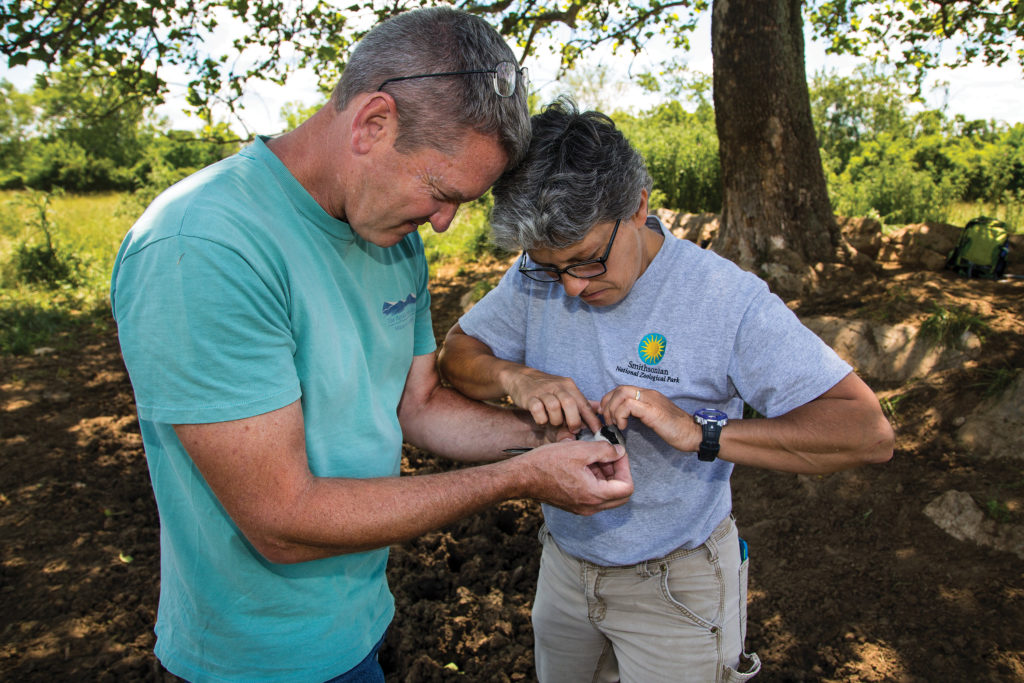 Warren Lynch holds a shrike while Lisa Ware checks it before collecting a blood sample.

Why has this intriguing bird experienced such a dramatic decline is the question challenging Harding and his colleagues. Some point to the increased use of pesticides between the 1940s and 1970s, speculating that shrikes may ingest pesticide-laced prey. Others posit vehicle collisions, vanishing farmland, conversion of pastures to other uses, hedgerow decimation, and habitat destruction.

Harding offers, “Many researchers across many geographies over many years have sought to identify the causes of loggerhead shrike declines, but to date have been unsuccessful. All of these factors are plausible, but ultimately, we don’t know. In certain parts of the range, habitat loss has very likely played a role.”

While the numbers are disconcerting, Harding is guardedly upbeat. “My ‘guesstimate’ is that we have around 100 breeding pairs in the state. In Virginia, they are not on the brink of extirpation. Through our work we know that there are a lot more shrikes out on the landscape than people might think. You can find them if you know where to look, but they definitely need conservation attention.”

Report banded or unbanded shrikes to DGIF by email or call 804-367-0143. Try to identify the color bands and provide date, time, location (the more precise the better), and other pertinent information—behaviors, for example. Photos are welcome but not required. 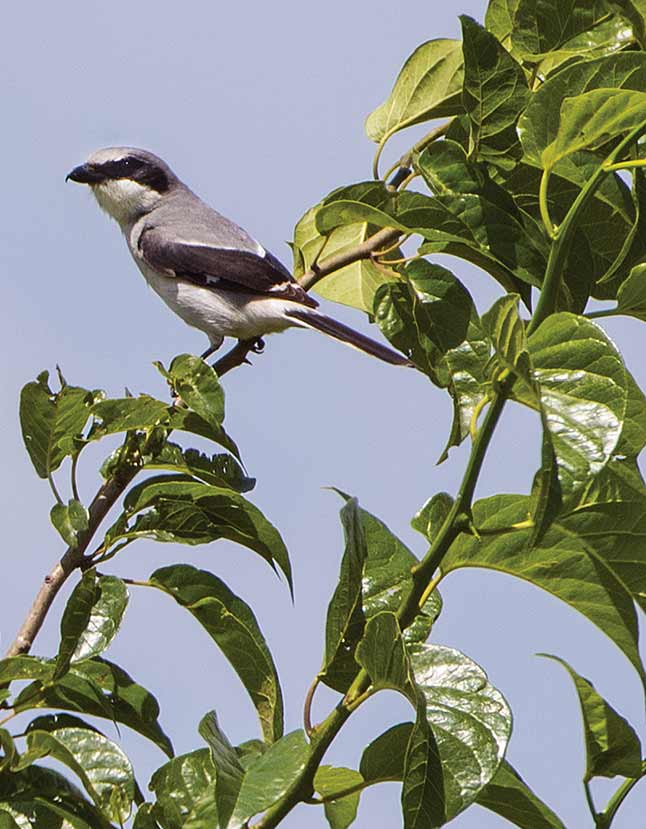