Work Hard and Try To Do the Right Thing: Matt Knox Reflects on Decades of Deer Management 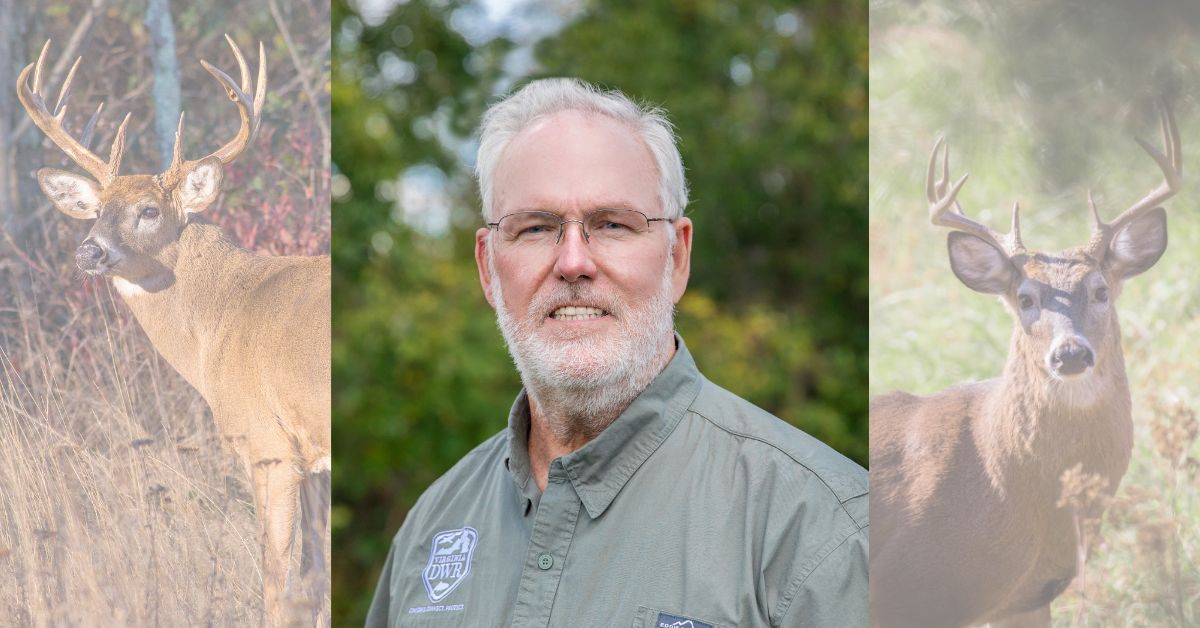 Matt Knox, Deer Project Leader for the Virginia Department of Wildlife Resources (DWR), sat in his Bedford County office twirling a miniature baseball bat. Behind him hung deer antlers draped in marathon medals, two degrees from the University of Georgia, a UGA flag, and a large map of Virginia. After 30 years as the DWR Deer Project Leader, Knox may be the most knowledgeable deer hunter in the state with more than a little wisdom to impart on the subject. This fall is his last in the role, as he’s retiring, so we asked him to reflect on his time at DWR.

Looking back on your career with DWR, is there anything that stands out to you?

The challenge of it, and all the accomplishments we’ve made. We’ve done some things that other states look at and say, “How did y’all do that?” I’m not going to take credit, but I was part of it. I was a cog in the machine.

In the early ‘90s, Virginia had a few private, exotic deer farms, but given concerns over disease management issues, we got out of the deer farming business. We outlawed high fence hunting operations. We’ve taken probably the strongest position in the country against deer feeding. Then there’s shooting over bait and fair chase issues. We’re not trying to make it easy to kill a deer. You’re not going to go out there and shoot a deer beside a bait pile in Virginia.

But it’s not just my career, it’s governors, Secretaries of Natural Resources, delegates, senators, multiple directors of this agency, board members, all the wildlife staff, the law enforcement staff, and more. It’s a team effort. Everyone didn’t always 100 percent agree, but there’s a culture of, “We’re going to try and get this done,” and we’ve been successful.

Looking back, a lot of the times I got the blame, sometimes I got the credit, but it wasn’t me, it was us. We’ve done some spectacular stuff. Our deer management program isn’t the best in the country because it’s not a competition, but if you asked, they’d say Virginia’s unique.

How has the deer program evolved since you began at DWR?

I think it’s become streamlined. We’ve got a deer management plan. When I came here we didn’t have a deer plan. We don’t get lost in the weeds as much because we have a plan that tells us what we’re going to do.

The plan helps us set deer seasons with a management objective. You can’t get in your car and go somewhere without knowing where you’re going. We’ve got to have a way to get there and a destination.

In my early DWR days, all the deer seasons were the same. They’re complex now because we have different objectives for different areas. We say, “Here’s our status, here’s our method, here’s our goal.”

We have a lot of really good data sets now. We are able to justify every decision we make in the deer program with data. We can’t do stuff that we can’t defend to a rational group of people, whether it be the governor and his staff, or the board of this agency, with a sound argument. We’re prepared to say” “Here’s how we do this, here’s why we do this and here’s what we’re trying to accomplish.”

The thing that’s unique about deer is that everybody knows deer; everybody has a stake in deer. For example, hairy woodpeckers, most people don’t know what they are and they don’t have any impact on most people’s life or livelihood. But think about white-tailed deer. People know what a deer is, they’ve seen one, and if they haven’t had it impact their life, they’ve had it impact the life of someone they know. So deer are very different from all these other species. Deer is our most public species.

If you had to pick a career highlight what would it be?

The whole 30 years, the journey. There are a few diamonds within that, but the whole 30 years I’ve enjoyed. That’s the only answer I can give. Like I said—politicians, administrators, staff, across the board, one person doesn’t accomplish this. It has to be a team effort.

What is the most important lesson you’ve learned during your career?

To work hard and try to do the right thing. The right thing is not always the easy thing. In fact, it’s generally not the easy thing. Don’t take the path of least resistance, take the right path. There’s always a rationalization you can come up with, like ‘It’ll be easier and there will be less blowback,” but what you do listening to that is you achieve mediocrity.

You need to take a very long-term view. One of our goals has been to outlaw deer feeding all together. We haven’t gotten there, in 30 years we haven’t gotten there. We’re almost there, but you can’t expect instantaneous gratification. Some things take decades. You have to do the right thing and be patient. Two steps forward one step back is fine—that’s one step forward. A lot of people have a fit about taking a step back. It doesn’t bother me at all; as long as I took two other steps forward, I figure I’m closer to where I wanted to go.

If you had to pick the most significant accomplishment of your career what would it be?

When I took over this job from the person before me 30 years ago, he passed on that we had four F’s: feeding, fencing, farming, and fair chase. They have been the four principles that we have tried to work on. Have we been perfect? No. But we have made tremendous progress.

And hopefully in the future, other people will make more progress. Fair chase is probably the one I’m proudest of. Fair chase is kind of a gray area, but in a lot of states, you can shoot a privately owned, half-tamed, semi-domesticated, supplementally fed, genetically engineered buck, standing inside a pen beside a bait pile. Not in Virginia.