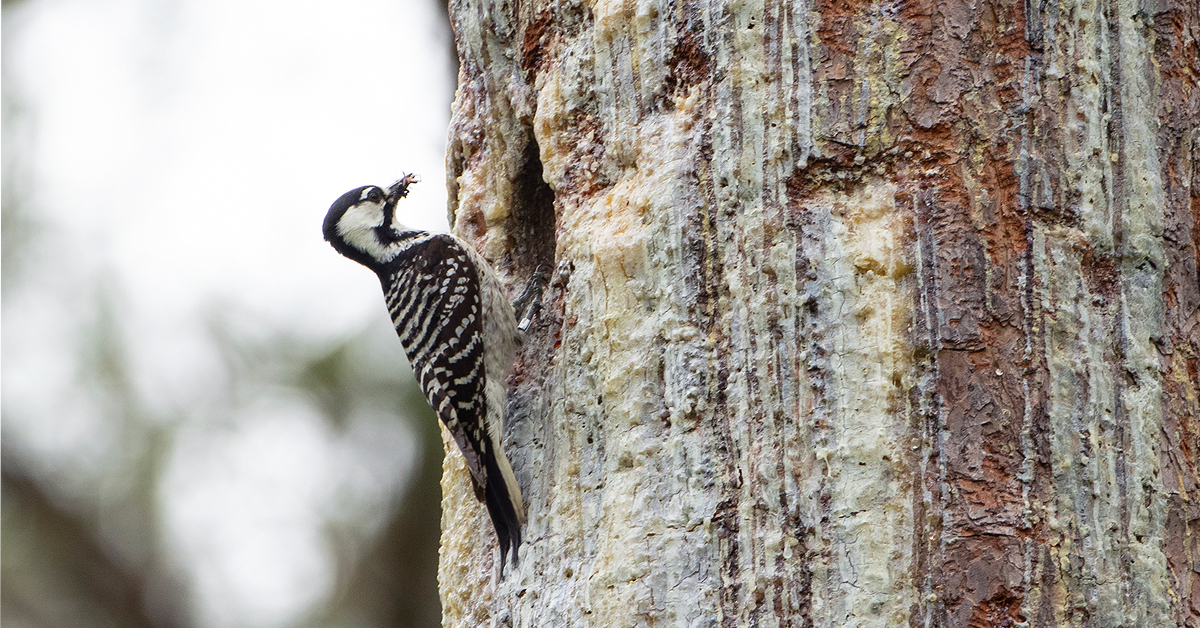 Following the banding of two red-cockaded woodpecker nestlings at Big Woods Wildlife Management Area on May 11, a May 26 check on the nest cavity revealed one dead and one missing nestling. Both nestlings had been judged to be developing slower than expected based on their size at banding, with the dead nestling being considerably smaller than its sibling. The missing nestling was thought to also have perished, which was confirmed through a survey by Department of Wildlife Resources (DWR) biologists on May 29 that detected the adult birds but found no sign of a young fledged bird.

A follow-up survey by DWR on June 5 led to the discovery of a second woodpecker nest in a different cavity tree within the same pine stand. This late re-nest by the pair, following the failure of their first nest, was a pleasant surprise. Two eggs were observed, with a nest check on June 8 confirming the adult female to be incubating a completed clutch of three eggs. Unfortunately, the cavity was found to be empty during a check on June 24, two days prior to the planned banding of the chicks. It is unknown whether any chicks were ever hatched, and the reason for this second nest failure is uncertain.

Despite these events, we are encouraged by the persistence of this breeding pair of red-cockaded woodpeckers, which consisted of last year’s breeding female and of a new breeding male. We look forward to next year’s breeding season, and are hopeful that the pair will successfully produce young birds to continue growing the woodpecker population on the WMA and the neighboring Piney Grove Preserve.

Read more about DWR’s efforts in restoring the red-cockaded woodpecker population in Virginia.