We’ve Got a Scrape

The male peregrine falcon has been observed working on a scrape in the nestbox at the Riverfront Plaza building. A scrape is a shallow bowl/ depression in the substrate of a falcon’s nesting area, in this case the gravel of the nest box. At the beginning of each season, male peregrine falcons create scrapes in different nesting locations and from these the female chooses her preferred location to nest.

In the past, another location where the original pair of falcons occasionally created a scrape was at a nest box behind a louver/ air vent of the Dominion Energy building (located at One James River Plaza). However, in coordination with Dominion Energy, this nest box was removed on March 6th.  This was done in anticipation of upcoming work at the building that may have interfered with this current pair’s nesting activities, should the falcons have chosen to nest there.

With the increased amount of time the female has been spending at the Riverfront Plaza nest box and the male’s continued attention to the scrape, we are optimistic that the female will select this site to nest. 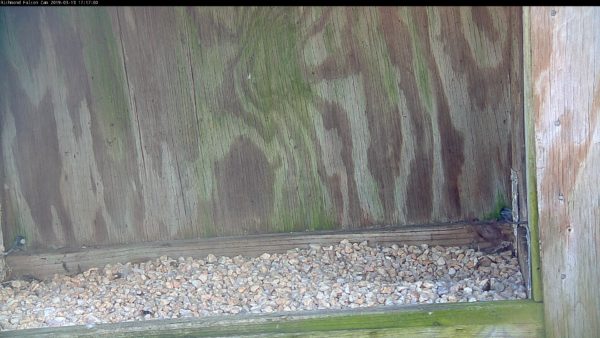 A scrape in the nest box at the Riverfront Plaza building, as seen on March 13. The scrape is the shallow depression/ bowl in the gravel on the right side of the box. 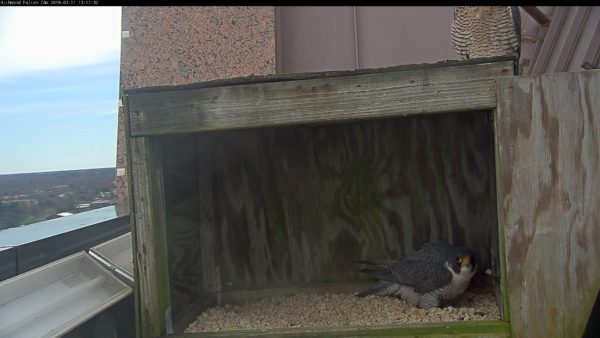 The male stands in the scrape while the female sits on top of the box. Observed on March 11. 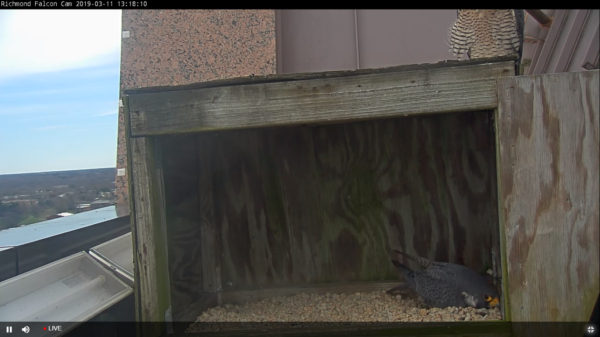 The male works on creating the scrape, while the female sits on top of the box. Observed on March 11.

The pair communicate over the scrape. The female is on the left and the male on the right. Seen on March 11.