We are happy to report that the first egg in the clutch of four has hatched. DGIF biologists detected pipping in one of the eggs on the afternoon of Monday, May 11th and continued to document further hatching progression into the next day. An incubation exchange occurred at 7:17 pm on May 12th where it was revealed that hatching had not yet occurred. However, roughly 10 minutes later at 7:27 pm the chick made its first appearance on camera, mostly hidden by the wing of the adult female. The female appears to assist the chick to some degree in removal of the eggshell and almost immediately begins to eat the remaining yolk and portions of the eggshell before moving the remnants to the side of the nest box. The yolk and the eggshell is incredibly nutritious and is often eaten by the adults after hatching. By consuming what is left over after the chick is free from the egg, the female is able to recoup some of the nutrients that were lost in the egg laying process.

Immediately after hatching, chicks are damp with lots of bare, pink skin exposed. However, within just a few short hours, they dry out taking on a much fluffier appearance due to their white, downy plumage which covers most of their body. Newly hatched falcons weigh approximately 30–40 grams (1.25 ounces) when they first hatch and are unable to fully thermoregulate (maintain core body temperature) for the first two weeks of life. This means the parents will continue to spend time on the nest “brooding” the chicks after they hatch and incubating the remaining eggs. 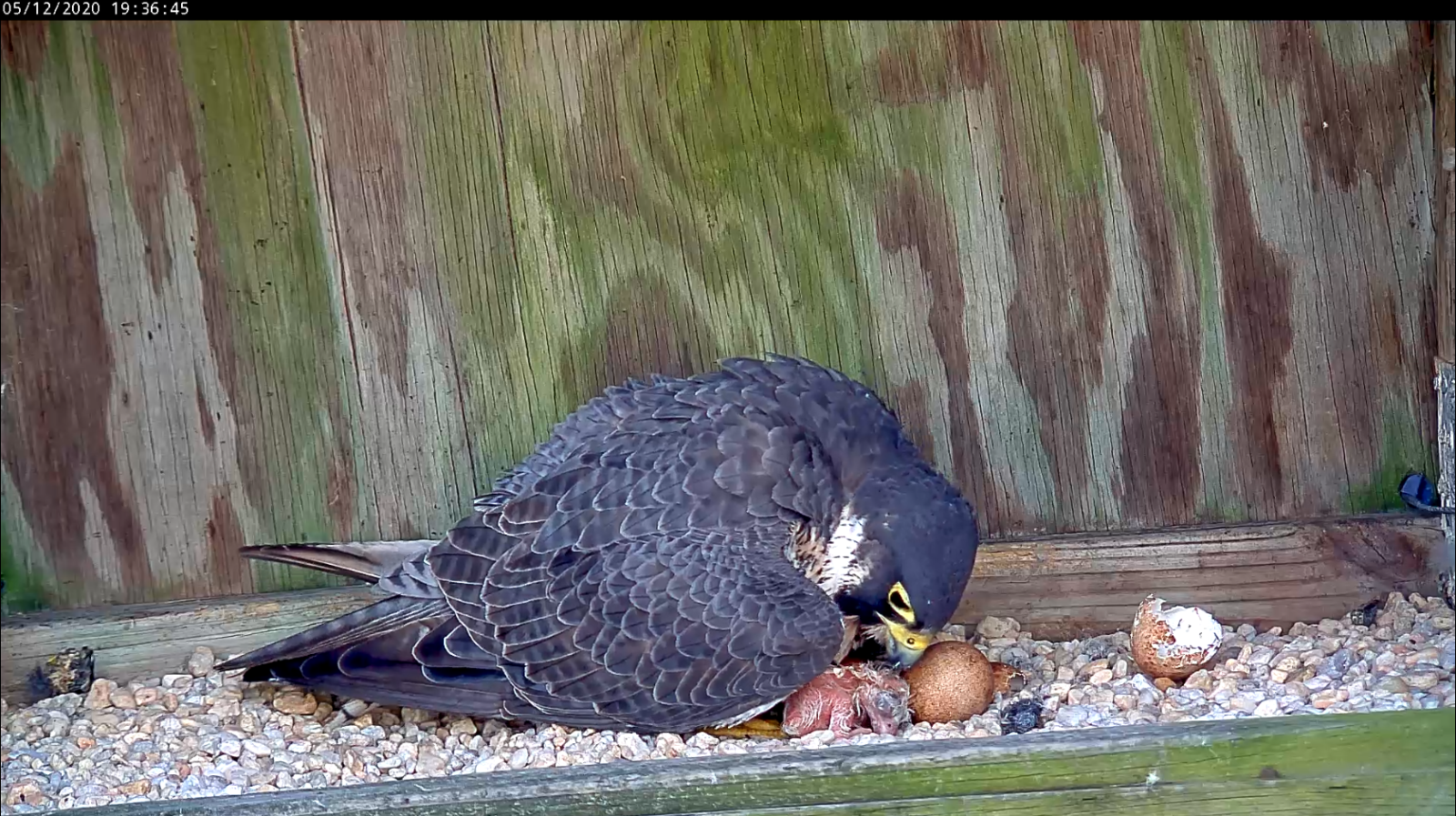 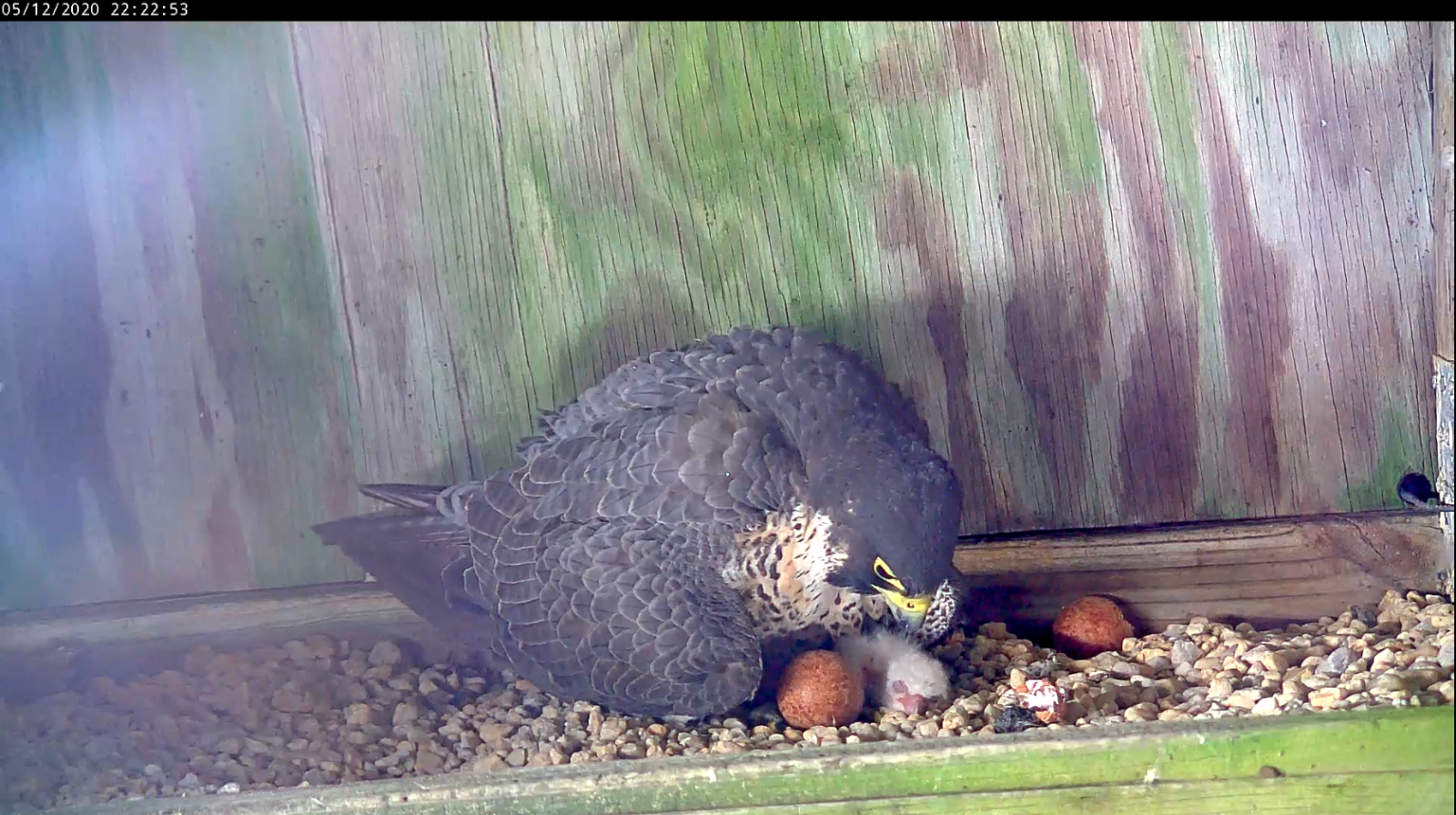 At some point in the early hours of the morning when the camera was dark, another exchange occurred where the male was presumably introduced to the new chick for the first time. At 6 am on Wednesday, May 13th the female falcon returns to the nest box with a prey item which was likely killed earlier by the male. She uses her beak to tear off small portions of meat which she then proceeds to feed to the chick. Although the chick is wobbly and uncoordinated now, it will become a much more efficient feeder over the course of the next few days as its muscles continue to develop and strengthen.

Diligent Falcon Cam watchers may remember that this adult female fledged in 2018 from the St. George’s Bridge in Delaware. DGIF Biologists believe this may be her first nest, and thus her first hatched chick! Be sure to check back in regularly as we hope to see the other eggs hatch within the next 24-48 hours. 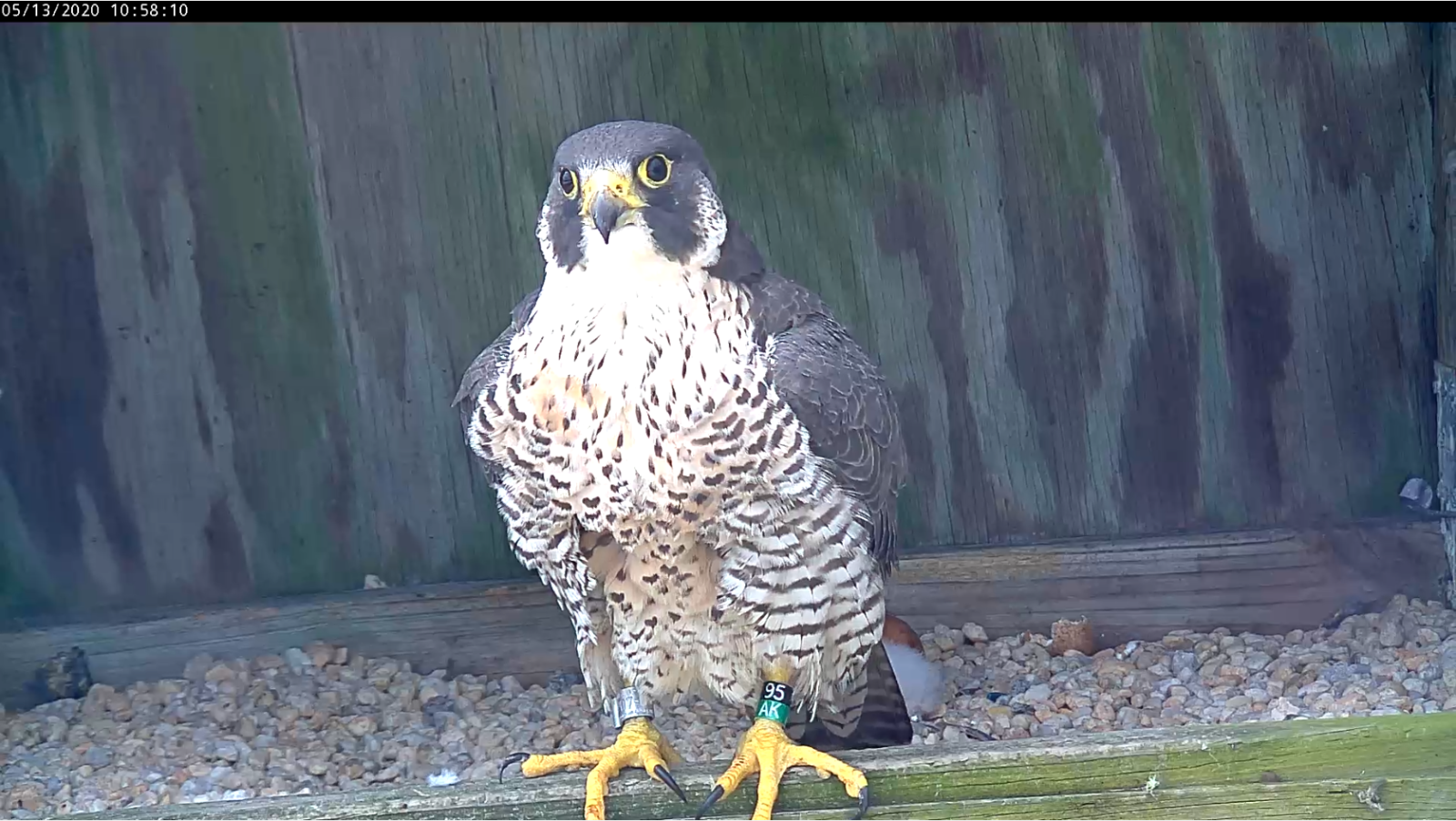 Female taking a short break from her incubation and brooding duties