Two DGIF biologists spent the day in downtown Richmond on Monday, June 22nd monitoring the chick’s activity after it fledged from the nestbox over the weekend. When staff arrived at 8:00 am the chick remained in the same position atop the windowsill of the Riverfront Plaza West Tower where it was last seen the night before. Both the adult male and female were seen flying overhead in the immediate vicinity of the West Tower between 8:00 am and 9:00 am, before the female eventually settled on the north-facing tower ledge. The adult female left the ledge at 10:50 am and returned approximately 20 minutes later with a prey item. The female made contact with the windowsill where the chick was located several times between short flights, during which time she circled the tower but did not drop off the prey item. After disappearing behind the West Tower for several minutes she returned again to the windowsill at 11:33 am where she handed the prey item off to the chick who began feeding several minutes later. 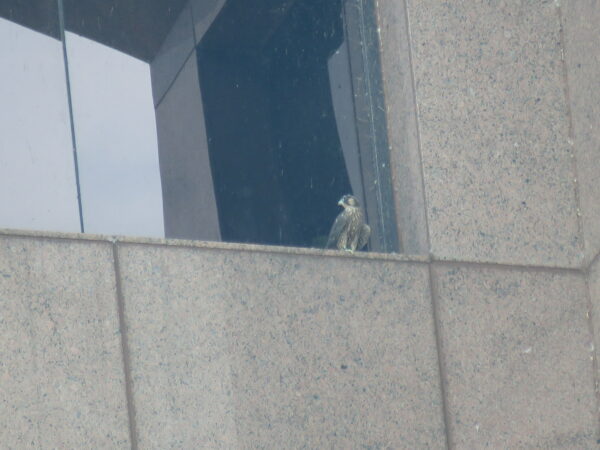 Falcon chick on the West Tower windowsill ledge at approximately 11:00 am on June 22

At approximately 2:30 pm a storm accompanied by heavy rain, winds, and lightning passed through downtown Richmond requiring staff to temporarily seek shelter indoors. When able to return to their original viewing positions at 3:38 pm biologists were unable to detect the chick in its former location atop the windowsill. Staff was granted access to the upper levels of both the Federal Reserve building as well as the Riverfront Plaza West Tower to better survey the surrounding landscape for the chick. Although the chick was not detected during these visits, the adult female was seen perching on the Riverfront Plaza West Tower’s BB&T sign while the male was observed perching on the Towne Bank sign attached to the Gateway Plaza Building located north of Riverfront Plaza. At 6:03 pm staff received a call regarding a tip from a concerned falcon watcher (thanks again Dan!) stating the chick was currently located on a Jersey barrier in the middle of Interstate 195 close to the 10th street overpass. DGIF biologists arrived on the scene within 10 minutes and confirmed the chick’s location atop the barrier between multiple lanes of traffic. Our staff was able to coordinate with the Richmond Police Department who was kind enough to deploy a traffic blockade along I-195 West which gave us the opportunity to access the chick. The chick evaded initial capture attempts along I-195 by flying low to the ground towards East Byrd Street, but was quickly captured afterwards outside of The Locks apartment building at 7:44 pm. 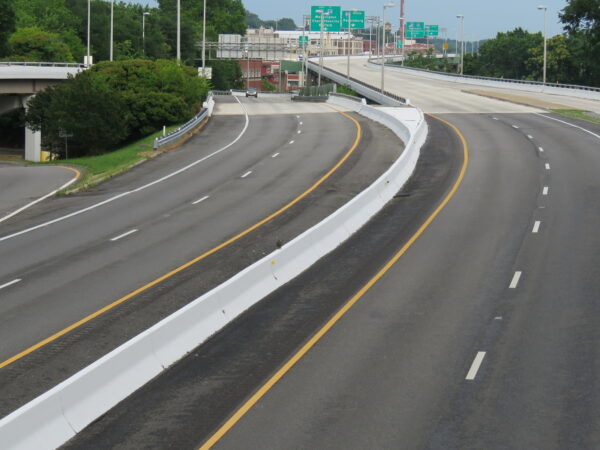 Falcon chick atop a Jersey barrier on I-195 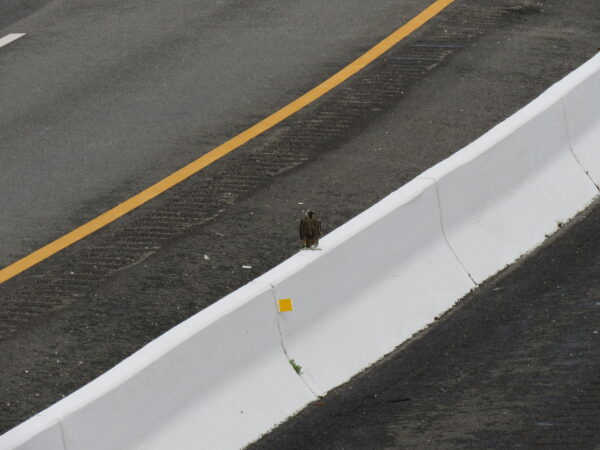 Closeup image of the falcon chick atop the barrier

After safely securing the chick, biologists examined her and noted that the chick appeared alert and did not display any external signs of injury. Despite this, the decision was made to transport the chick to the Wildlife Center of Virginia for additional examination given her young age, difficulty flying, and the fact that she had already been returned to the nest box ledge once before. We will be posting updates on the chick’s status as they become available.