Virginia Department of Game and Inland Fisheries (VDGIF) biologists accessed the ledge this morning to band the falcon chick and collect the remaining unviable eggs from the nest box. 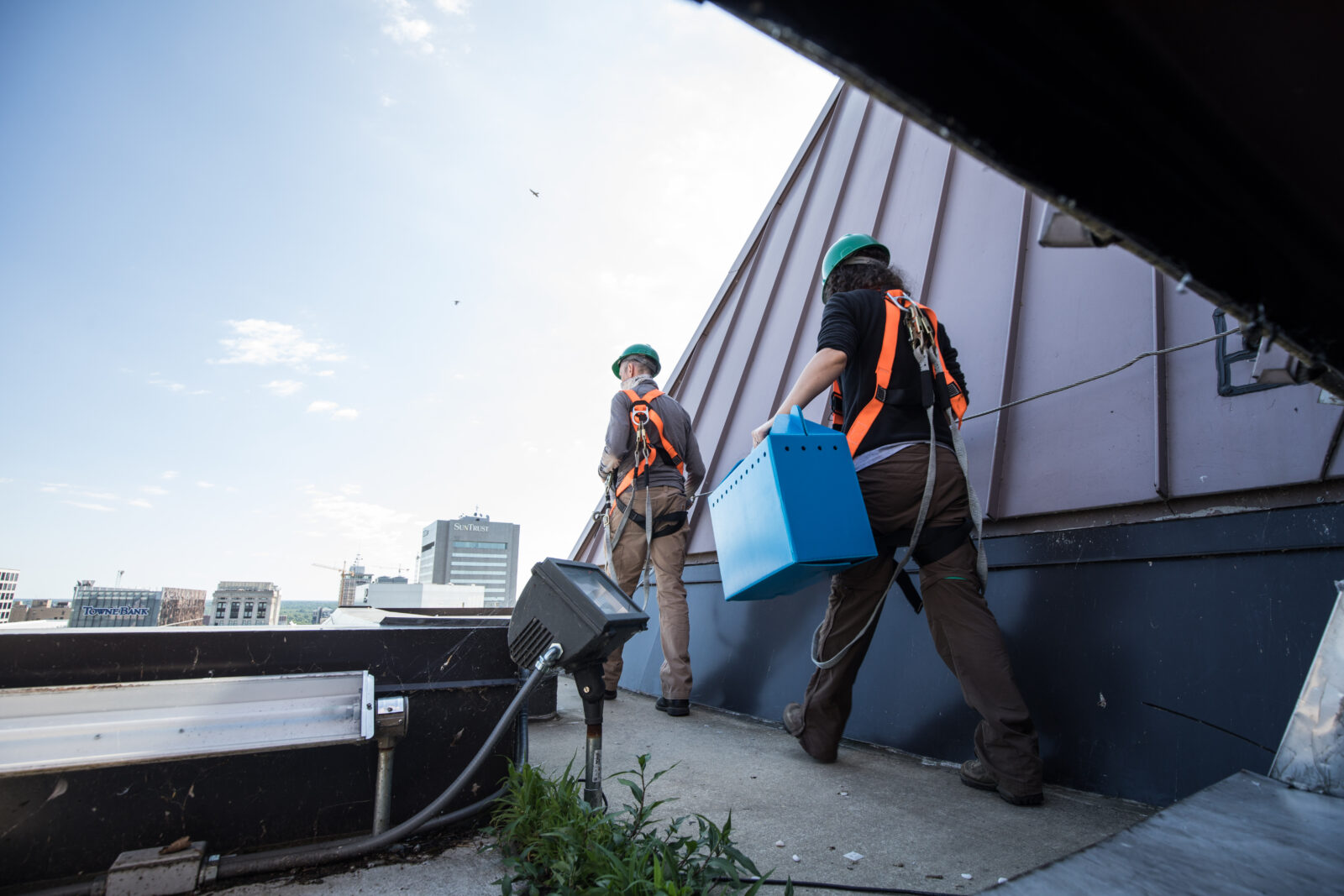 DGIF biologists making their way to the nest box. The adult male and female falcons can be seen circling overhead.

After successfully capturing the chick, it was taken indoors for data collection and banding. The chick was identified as a female based on its weight of 917.3 grams (approximately two pounds) and the diameter of its tarsus (portion of the bird’s leg immediately above the foot). Male peregrine falcons are smaller than females and thus have a thinner tarsus which would be given a smaller set of bands. Her right leg received a green USGS federal band which reads 1907-01925, while her left leg received a “field-readable” black over green band which reads 88/AV. The chick remained alert throughout the process, and was judged to be in good health based on her overall appearance and behavior. The chick was promptly returned to the nest box after banding and data collection was completed, which took approximately 15 minutes. 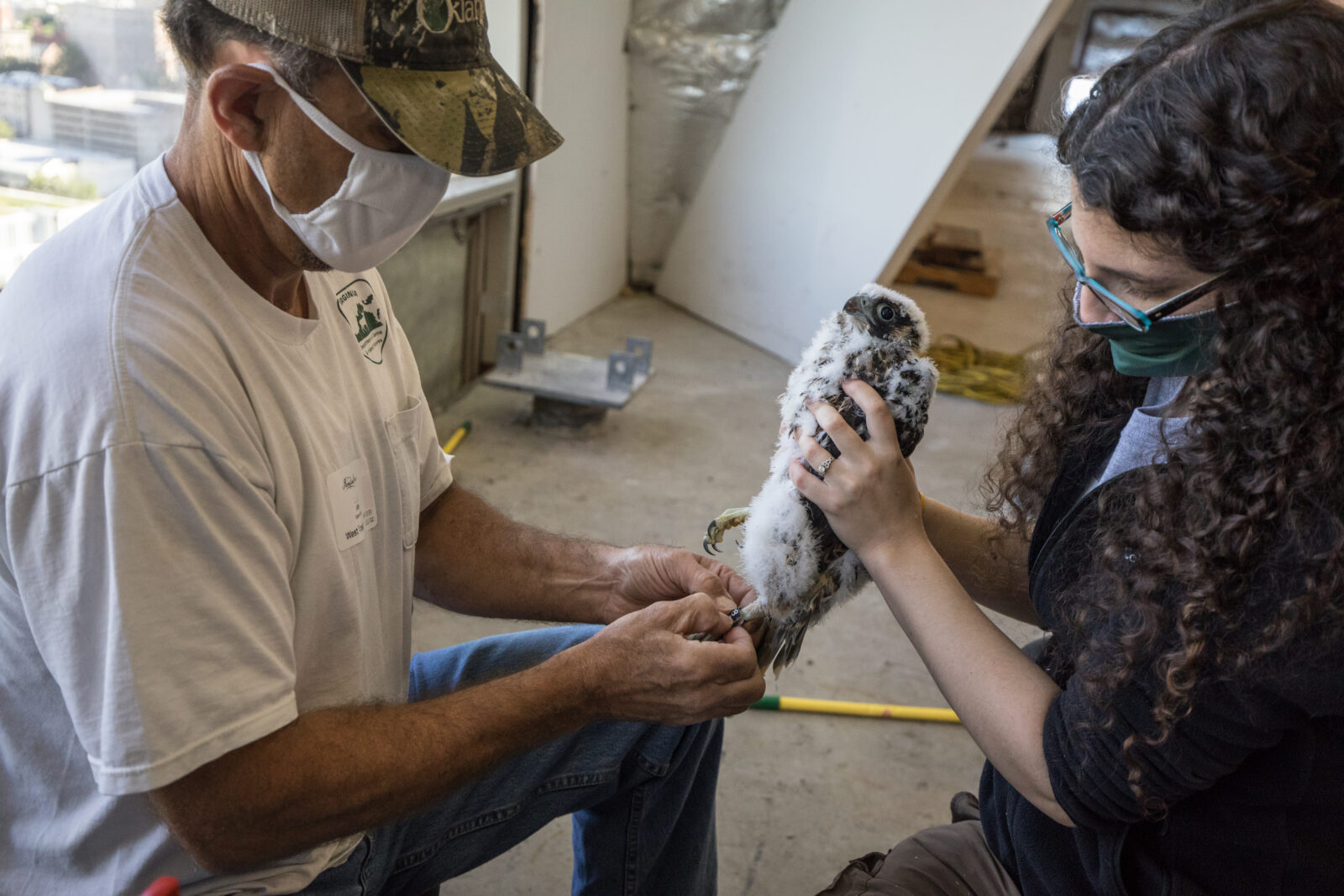 Biologists equipping the black over green field-readable band on the chick’s leg. 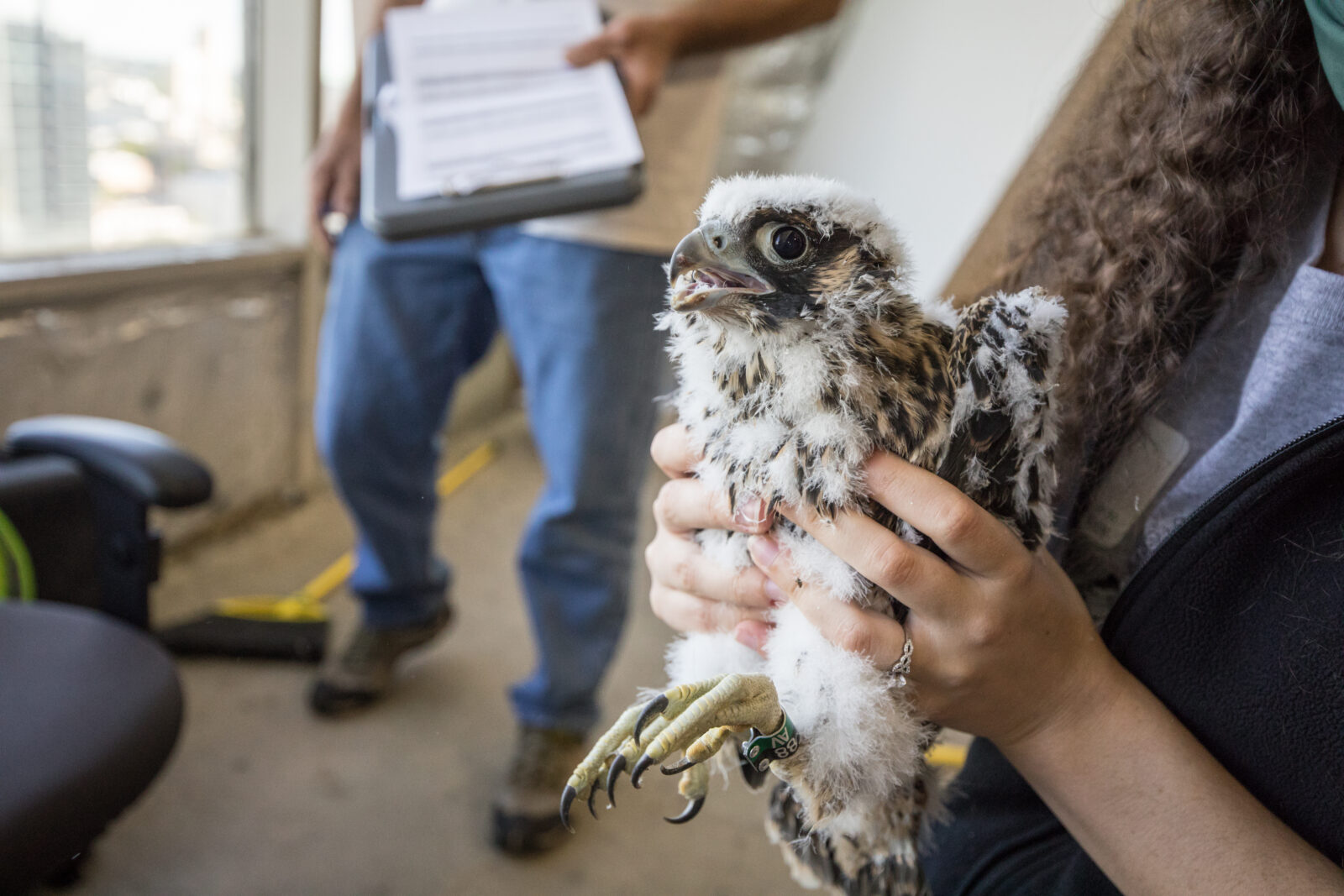 The falcon chick can now be identified by onlookers with the 88/AV band on its left leg. 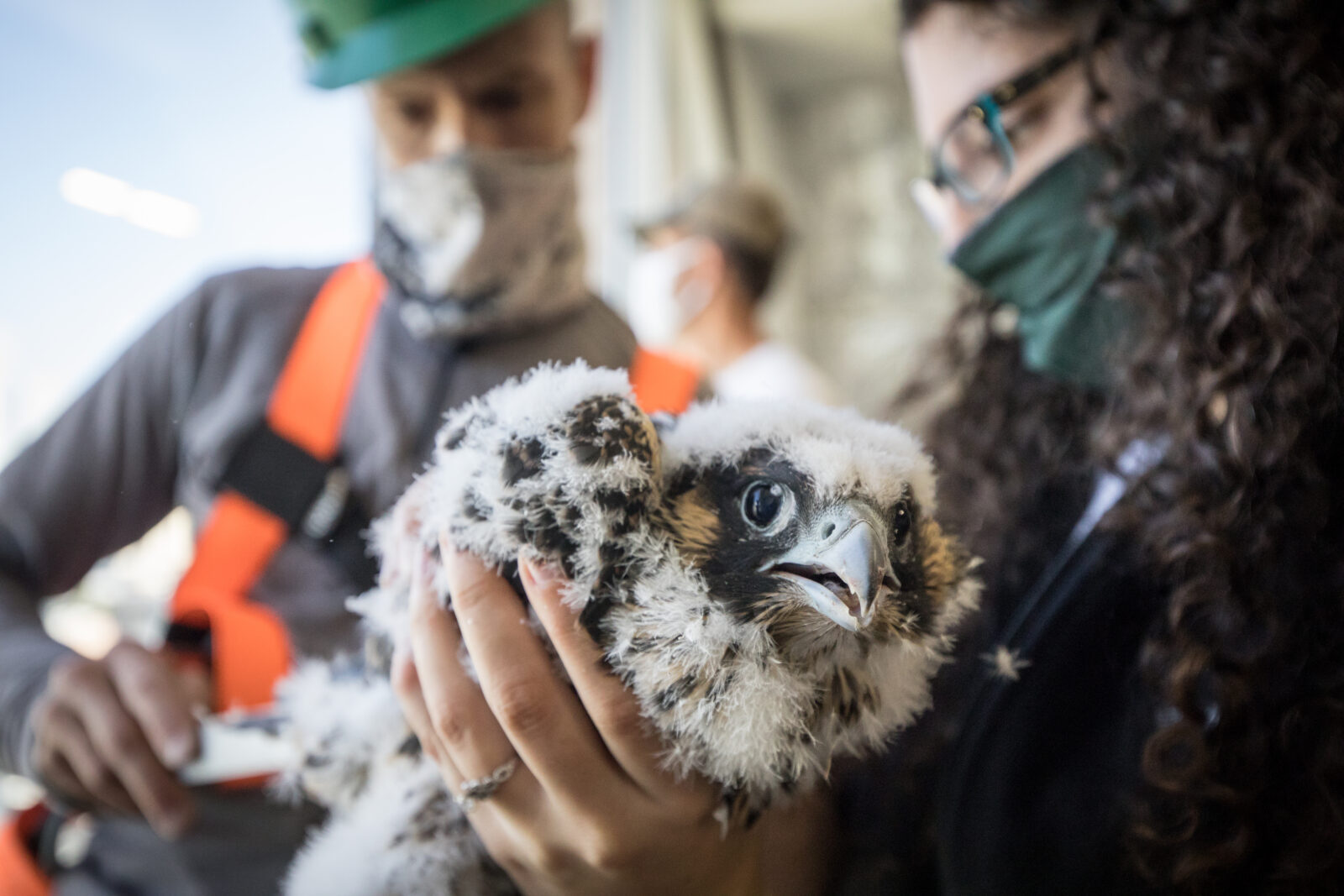 Chick in the process of having its tail feathers measured.

In previous years while banding peregrine chicks, DGIF biologists have installed a pen in front of the nest box as a precautionary measure to prevent chicks from fledging before they are fully able to fly (see FAQ for more information). If there had been multiple chicks this year we would have been concerned about at least one of those chicks fledging prematurely and exposing itself to potential injury. With only one chick however, the odds of this happening are lower. Furthermore, because this is a recently formed breeding pair that are first time parents we wanted to give them a wide berth. For these reasons we opted not to install the pen this year.

We expect to see the chick continue to explore the ledge as it has been periodically doing over the course of the last few days. Not seeing the chick on camera should not be cause for alarm as the building has several other features which can be used as shelter, and oftentimes the parents cache food items off camera along the ledge. Even though the parents may not be visible at all times, at least one parent is almost always nearby keeping tabs on the chick’s location.

We anticipate the chick will fledge sometime within the window of June 21st – June 25th and will be posting more updates related to fledging within the upcoming weeks. Finally, if you can’t get enough falcons check out the video below to get a behind the scenes look at the banding process! 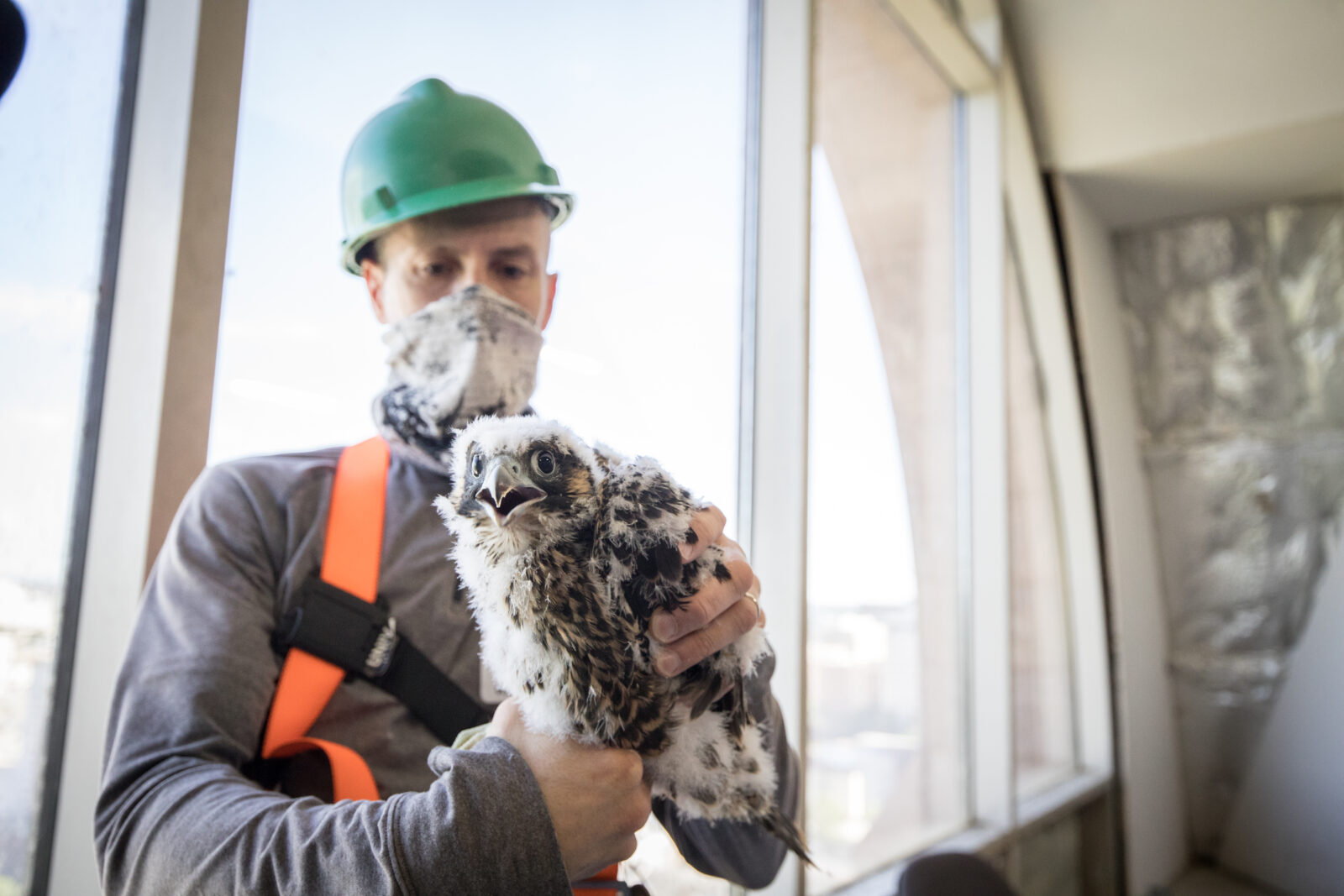 Ready to be released in the nest box!