We regret to report that the 2021 falcon breeding season will be starting under unfortunate circumstances as the male of the Richmond pair of peregrine falcons has died. An injured falcon was reported by a citizen and picked up by Richmond Animal Care and Control on January 9th in a residential neighborhood approximately 1.5 miles from Riverfront Plaza where the falcons nest. The bird was identified as the male of the pair based on its leg bands (24/AU). The falcon had sustained a severe injury which resulted in the right wing completely detaching from the scapula (shoulder blade). Due to the gravity of the injury, euthanasia was determined to be the best course of action. 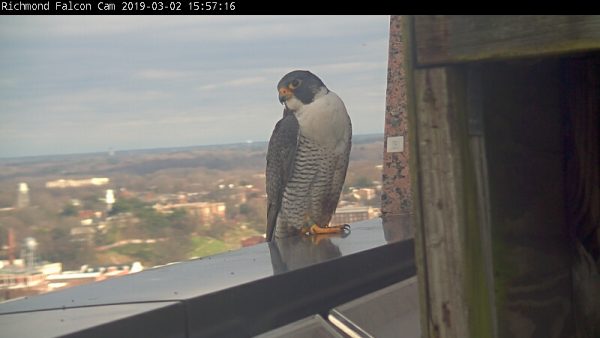 Although its cause is ultimately unknown, the injury is consistent with the falcon having been struck by a moving vehicle or having collided with a stationary object such as a transmission line or guy-wire (a tensioned cable used to help stabilize tall, free-standing vertical structures such as utility poles and communication towers).

24/AU hatched in 2015 at a nest box in Dumfries, Virginia. The bird first claimed his territory in downtown Richmond in 2019, following the disappearance of another male which had bred there since 2003. Despite not producing any eggs in that first year, 24/AU and his mate (banded as 95/AK) produced four eggs and fledged one chick in 2020. 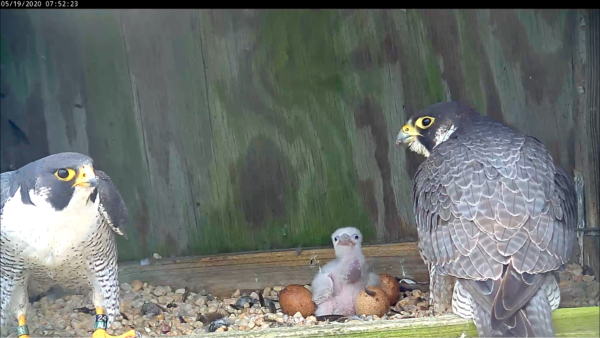 Though we cannot know for sure, we expect that 24/AU will be replaced by another male in the upcoming breeding season. There are many peregrines in the broader Coastal Plain of Virginia that are not attached to territories and readily compete to occupy breeding vacancies when they arise. The Richmond territory has in fact seen a high turnover of falcons in recent years as a result of breeding competition by females.

Although 24/AU only appeared on camera for two short years, we will remember him fondly and hope to see his mate 95/AK return to the nest box this year. We invite you to watch with us in the upcoming breeding season, once the Richmond Falcon Cam resumes its live stream in early March, as we hope for a new pair and successful nest in the months ahead.