Yesterday was an incredibly eventful day at the Richmond Falcon nest box! 38 days after the first egg was laid, three of the four eggs hatched overnight and in the early morning hours of May 5. The chicks were brooded by the adult female throughout the majority of the day, but we were treated to glimpses of the hatchlings when the adult female shifted her position or made short trips out of the box. And, if you missed out on yesterday’s action, check out our Hatch Day Highlight Reel at the bottom of this post which contains clips from the major events we documented throughout the day. 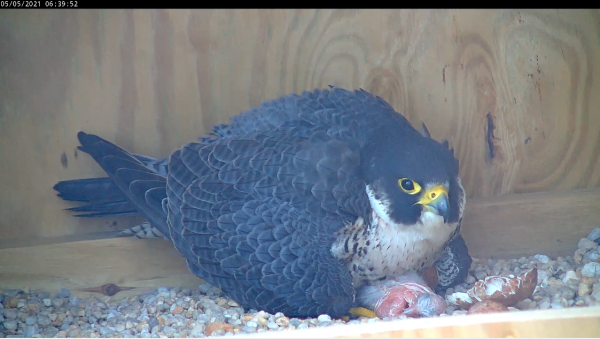 Adult female brooding her chicks on hatch day. The third chick, which had hatched just minutes before this photo was taken, can be seen resting in front of her.

The three chicks received their first meal, fed to them by the female at 11:30 a.m., but due to her position facing away from the camera, the feeding wasn’t visible. Fortunately, viewers were treated to several other feedings throughout the day, including a blue jay which was delivered to the female by her mate around 2:45p.m. Using her beak to tear off small portions of meat, she delicately delivered several pieces to each chick’s open mouth before carrying the remains of the blue jay out of the box. Although the chicks appear wobbly and uncoordinated now, they will become much stronger and more efficient feeders over the course of the next few days as their muscles continue to develop and strengthen. 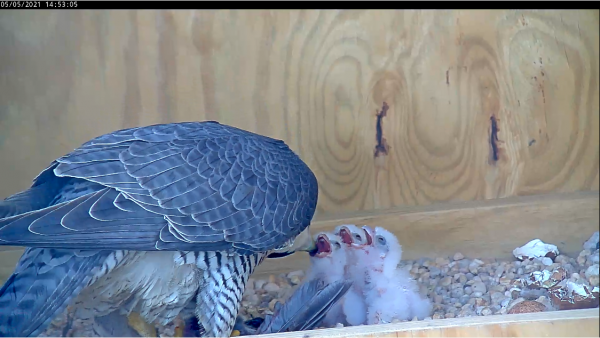 The falcon chicks receiving their second ever meal, a blue jay, fed to them by the female.

The adult male of the falcon pair checked in on the chicks several times yesterday but didn’t spend any extended period of time brooding the hatchlings. However, this morning around 6:00 a.m. he was observed atop the chicks until the female entered the box with a prey item that was promptly fed to her offspring. This male is relatively young, having hatched from Yorktown in 2019, and thus these are the first chicks he has ever fathered or raised. 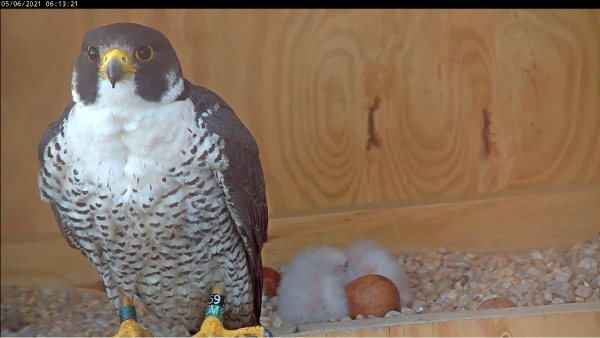 Male falcon taking a short break from brooding duties. The three chicks and the fourth currently unhatched egg are visible in the scrape behind him. 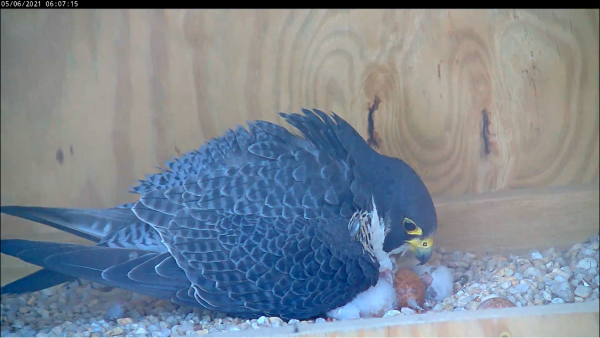 Yesterday was also a big milestone for the female in the pair as this is her first ever multi-chick brood, considering her very first clutch was laid last year and had only one of four eggs hatch. 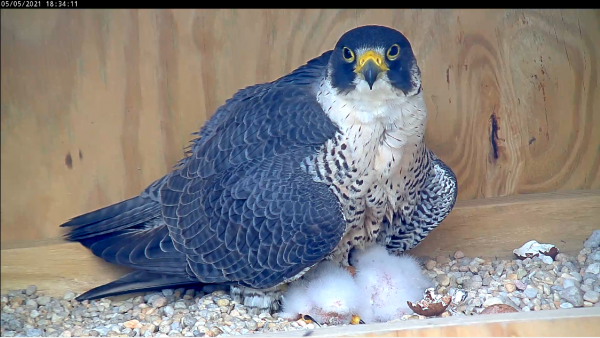 We are continuing to watch and wait in hopes that the fourth egg will also hatch!