With the dawn of a new day, five DWR biologists once again descended onto Downtown Richmond to continue monitoring the juvenile falcons following yesterday’s fledge event.

Staff left the Riverfront Plaza buildings the previous evening following a note of uncertainty after a juvenile was spotted perched atop the Williams Mullen building. We were optimistic that this fledgling was one of the two males (red or blue) which hadn’t been spotted since approximately 12:30pm that day despite our extensive scans of the surrounding landscape. There was also a chance, albeit a less likely one, that this unidentified fledgling could be orange who earlier appeared to be hunkering down for the night atop the Towne Bank parking deck. Additionally, one of the female fledglings (yellow) was transported to the vet on Fledge Day following a failed landing attempt on the Dominion building which left her grounded at street level.

Upon our return to the Plaza this morning, we were thrilled to see that the unidentified juvenile was still perched in the same location atop the Williams Mullen building. Fortunately, at 7:15am, shortly after our arrival we were lucky to catch a fleeting glimpse of this juvenile’s band when it stretched its right leg out, allowing us to confirm that it was the blue male. 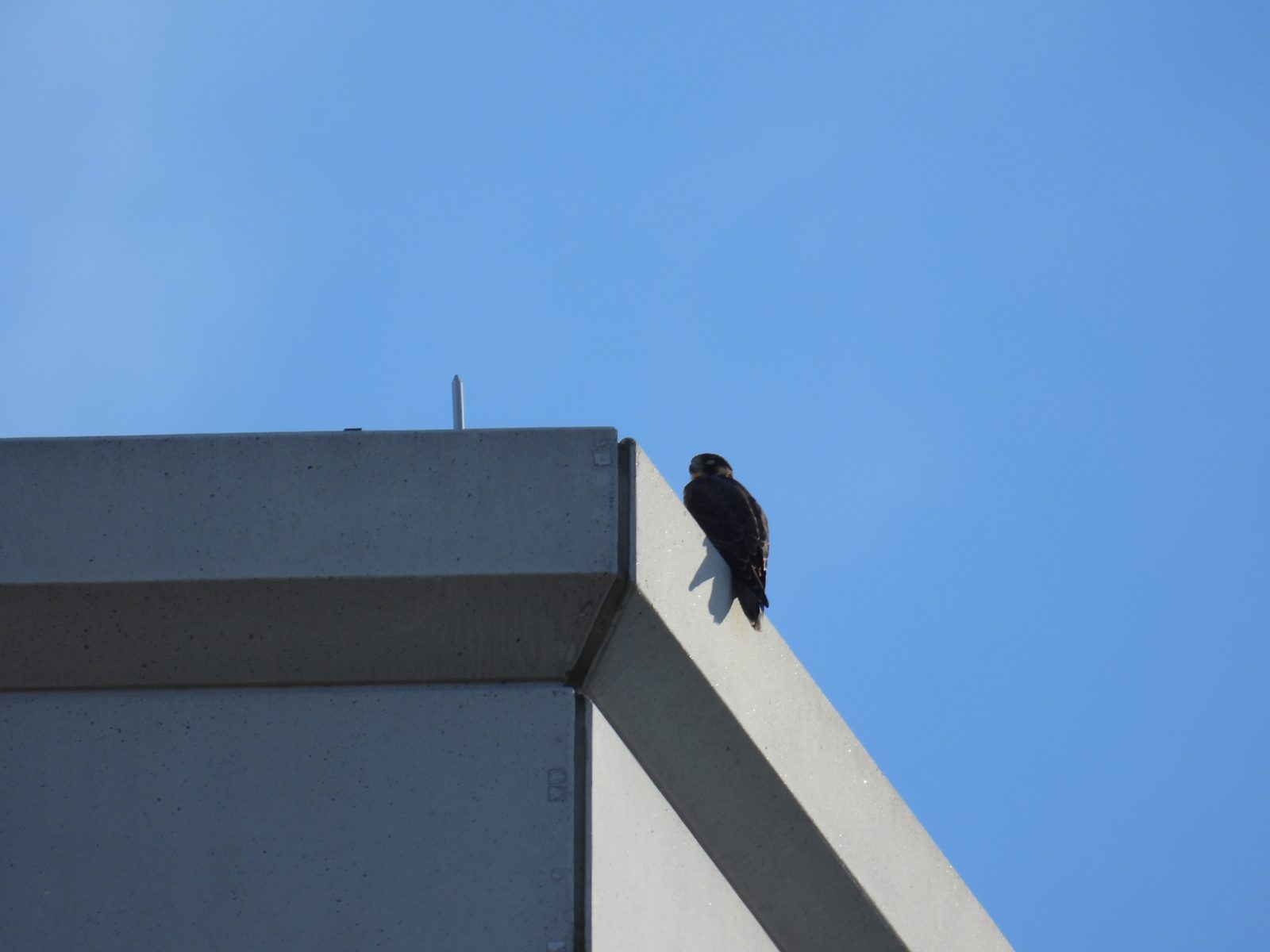 Juvenile male (blue) perched atop the Williams Mullen building during the morning hours of June 24th. 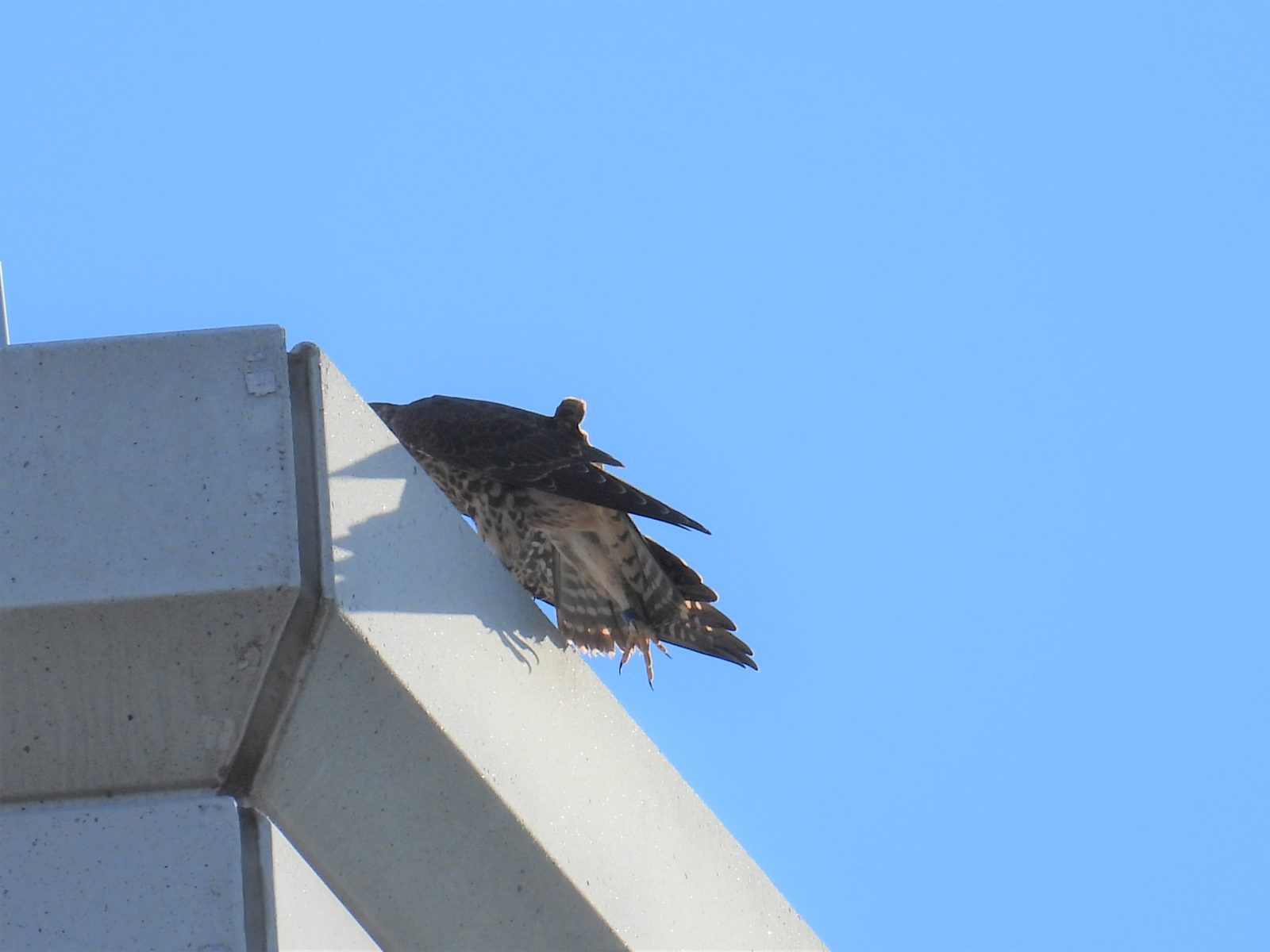 At 8:00am, staff split up and moved to their respective locations in an effort to keep tabs on blue while also attempting to locate the adults and remaining fledglings—orange and red.

Both adults were located rather quickly atop the SunTrust building signs with one adult on the south-facing sign and the other on the west-facing sign but orange was no longer perched on the parking deck. Blue left the Williams Mullen building and joined the adults on the roof of the SunTrust building at 9:35 am. His flight to the building was strong, and while this landing wasn’t perfect, it was still an improvement relative to the landing attempts observed the previous day. 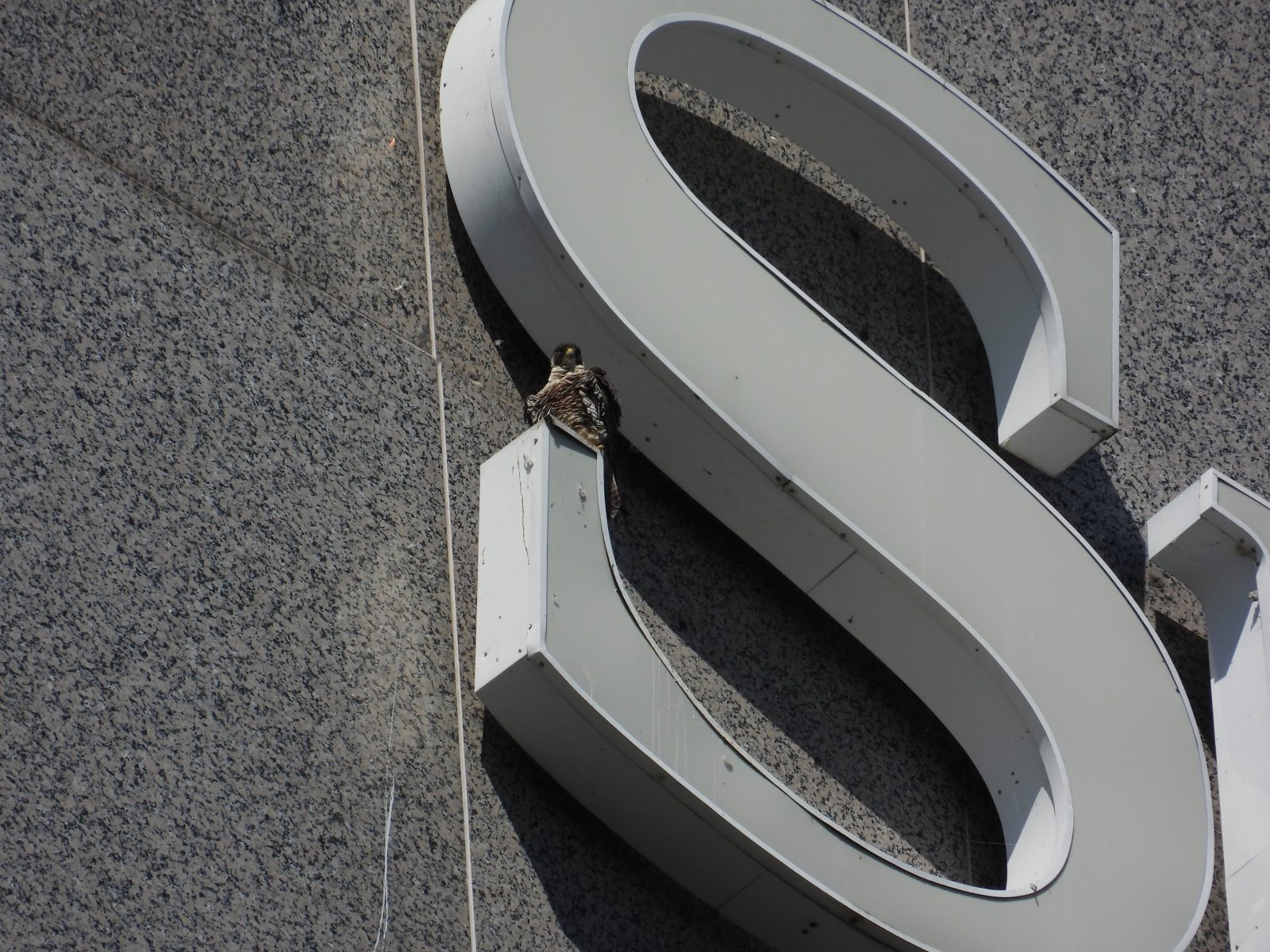 Adult female perched atop one of the SunTrust building signs.

The remainder of the morning was spent monitoring blue and attempting to locate red and orange. The adults made short flights out of view of staff, but regularly returned to the SunTrust signs. Multiple attempts were made to keep up with the adults during these trips in the hopes that they could offer insight into the location of the missing juveniles, however these efforts ultimately proved unsuccessful.

The slow morning quickly shifted into an action-packed afternoon around 1pm when a flurry of falcon activity picked up around the SunTrust building. Multiple birds, including adults and juveniles, were observed flying around this building and landing at varying times atop both the roof and signs. At one point, blue was flushed from his corner by another juvenile and relocated to a different corner of the roof. Shortly after this event, while blue remained perched and visible, four falcons were observed in flight together, just north of the building. This observation was a major event for this year’s Watch, as it was the first time that we had known locations on all birds at the same time post-fledge. After the group of four was spotted, the two juveniles (red and orange) broke away from the adults and headed west towards the Virginia Lottery building and out of sight from staff. The adults eventually perched again on the building signs. 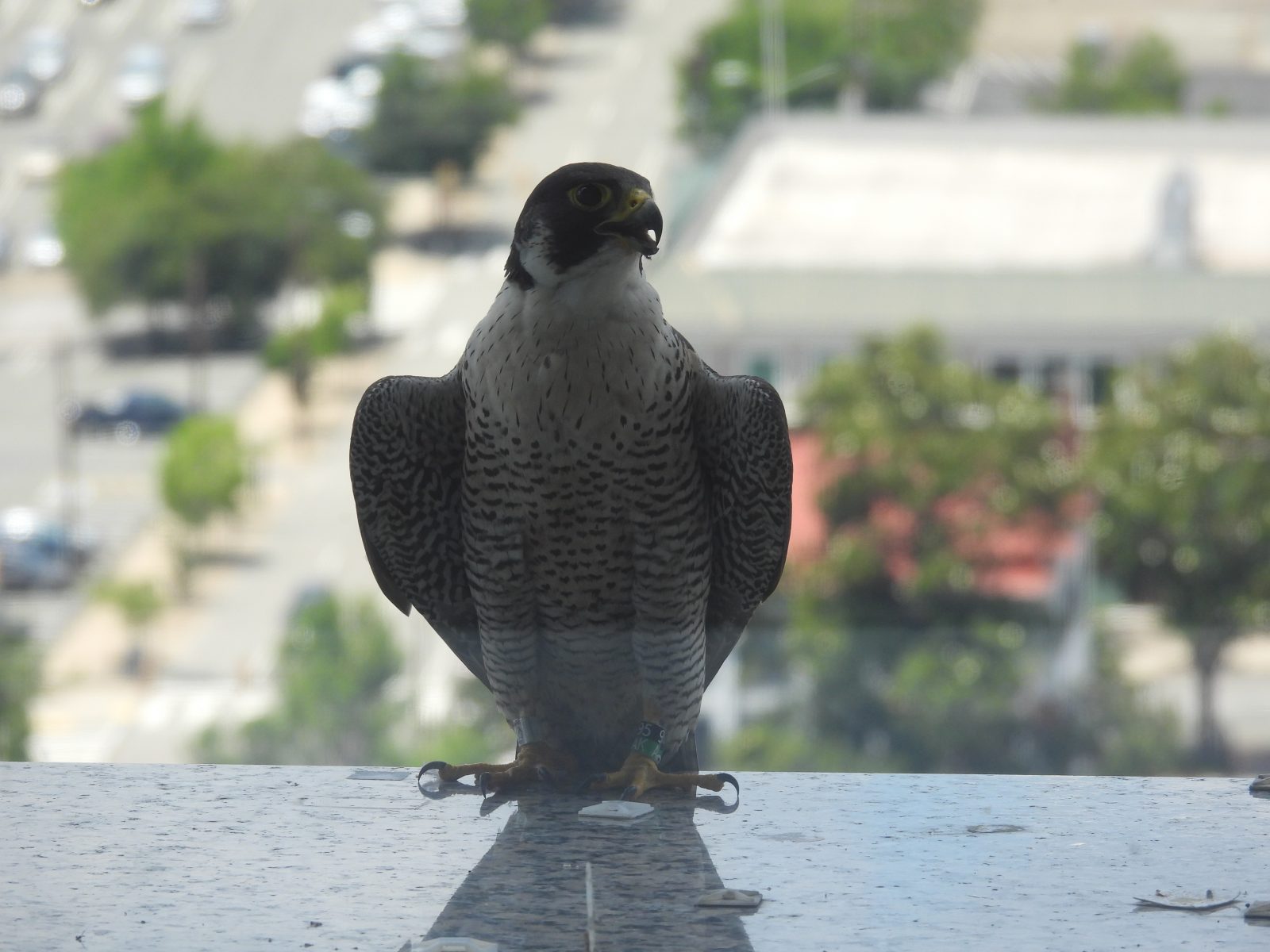 Adult female on the west ledge of the SunTrust building.

About an hour after observing orange and red fly away, orange was again spotted—this time atop the building immediately west of SunTrust, where both the adults and blue were perched. Staff continued to observe orange and blue for the next several hours, noting a prey delivery to orange and a short flight from blue around the SunTrust building that ended in a smooth landing on his prior perch atop the building’s roof. 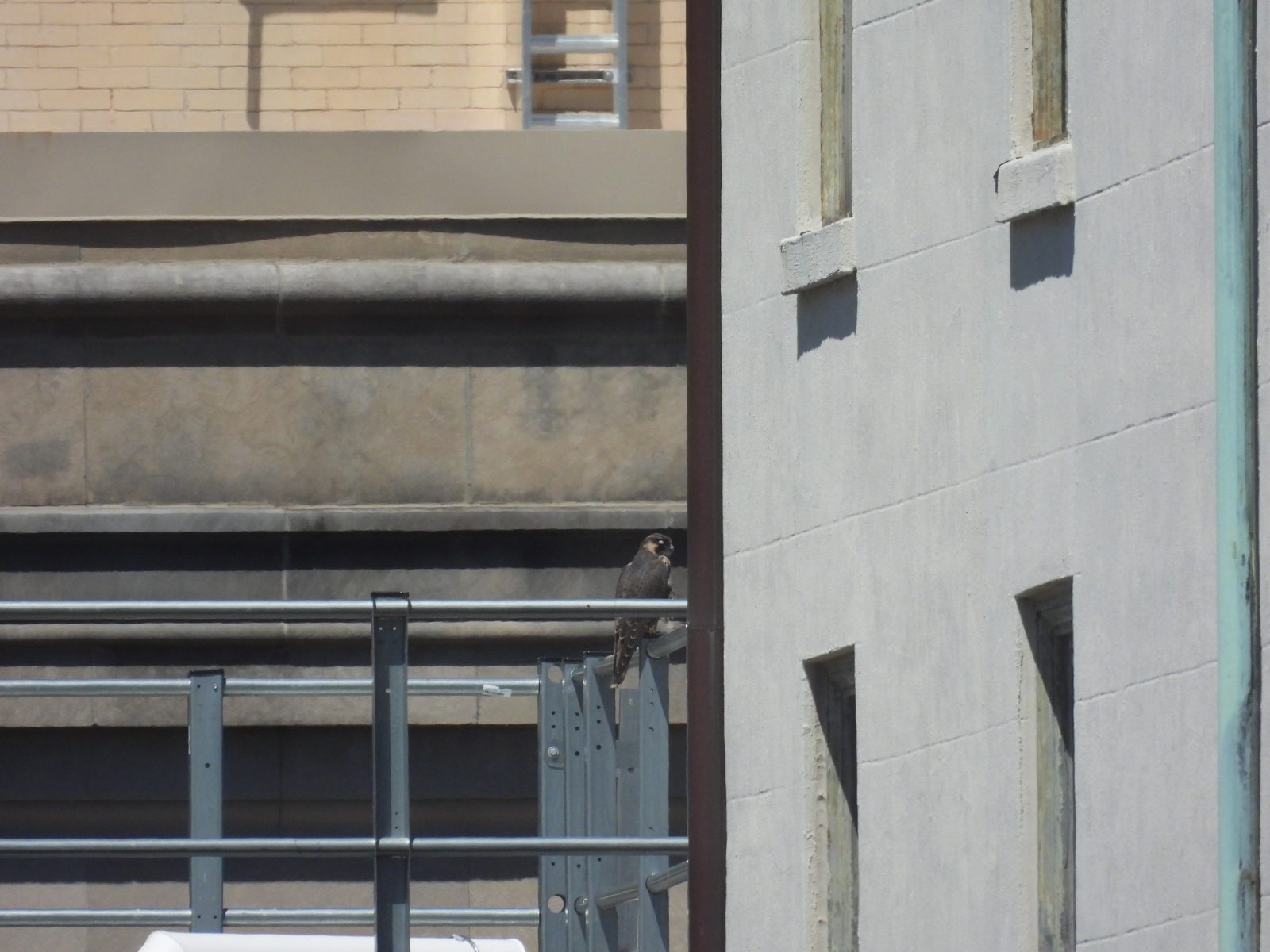 Juvenile female (orange) perched on the roof of the building immediately west of the SunTrust building.

Although we did not see red again, our earlier observations of each of the three fledglings leave us confident that each is growing in their mastery of both flight and landing skills. Additionally, DWR staff were incredibly pleased by the attentiveness shown to the juveniles by the adults who appeared to be regularly keeping up with their respective locations. Today’s promising observations are bittersweet as it also signals the end of our 2021 Fledgewatch and DWR’s constant Downtown monitoring of these three fledglings. The juveniles are sure to remain in the Richmond area for the next several weeks before ultimately moving on to other regions, and likely even other states. With that in mind, we may receive additional reports of the their whereabouts and will be sure to update all of our Falcon Cam followers if this happens. We will also be providing updates on yellow, the fldgling who was taken to the wildlife veterinarian yesterday. Today, she was transported to the Wildlife Center of Virginia and we have received reports that she remains just as feisty as ever but still in need of additional evaluation. We will continue to provide updates on her condition as we receive them.

And, if you weren’t able to catch the fledge events live on cam, fear not! We will be posting a video montage of camera footage from Fledge Day next week – just after our biologists get some well-deserved rest!

Last but not least, we want to extend a big thank you to the many people who made this year’s Fledgewatch such a success, especially our volunteers and building partners. We hope to see you all again next year!