Post-Release Update on the Yellow-banded Fledgling

Despite a few bumps on the road, we are happy to report that the yellow juvenile fledged from Riverfront Plaza for the second time this season. This female falcon had been previously transported to the Wildlife Center of Virginia (WCV) following a grounding during her first flights on Wednesday, June 23. Following a clean bill of health for the bird by the WCV, biologists from the Virginia Department of Wildlife Resources received the bird at Riverfront Plaza from a WCV volunteer transporter at approximately 8:45 am on Monday, June 28. We quickly moved the bird from a large transport crate into a small, portable pet carrier, and from there to the nest ledge. We then opened the carrier and let the bird gently slide out onto the gravel in the nest box. We immediately backed away and headed back inside the building, as the still-territorial parents had appeared by this time and we wanted to avoid agitating the juvenile into taking flight before she was ready.

Within minutes of the release, an on-the-ground volunteer noticed and alerted us to a piece of plastic attached to the juvenile’s tail, which we had not observed due to our efforts to minimize our handling of the bird. We immediately contacted the WCV and were informed that the plastic sheath was a tail guard designed to prevent damage to the tail feathers during transport. A raptor’s tail feathers help it to achieve lift at slow speeds, as well as to steer and, when flared downward, to decrease its velocity, which is especially important when landing.  Because the guard interferes with the bird’s use of its tail feathers, we attempted to recapture the juvenile with a long-handled net in order to remove the guard, but she  took flight almost immediately as we exited onto the ledge. Despite the tail guard, she displayed absolutely no difficulty in flying and was quickly joined by the adults. After making several circles around the building, she settled atop the west arch of the tower, which was physically inaccessible to us. Roughly thirty minutes later she flew towards the SunTrust building where we believe her to have landed on the roof.

While we worked to gain access to this roof in another attempt to capture the bird, she again took flight, this time towards a parking deck near the Dominion Building. She was seen circling and flying in this area several times but quickly disappeared out of view.

At 2:40pm we observed a juvenile peregrine perched atop the ‘S’ of the SunTrust sign on the west facing side of the building. This was a pleasant surprise, as it was the first time that we had seen a juvenile bird on the sign, a testament to its skills in landing onto such a small space.  We were even more pleased to identify the juvenile as yellow by both her bands and the presence of the tail guard. 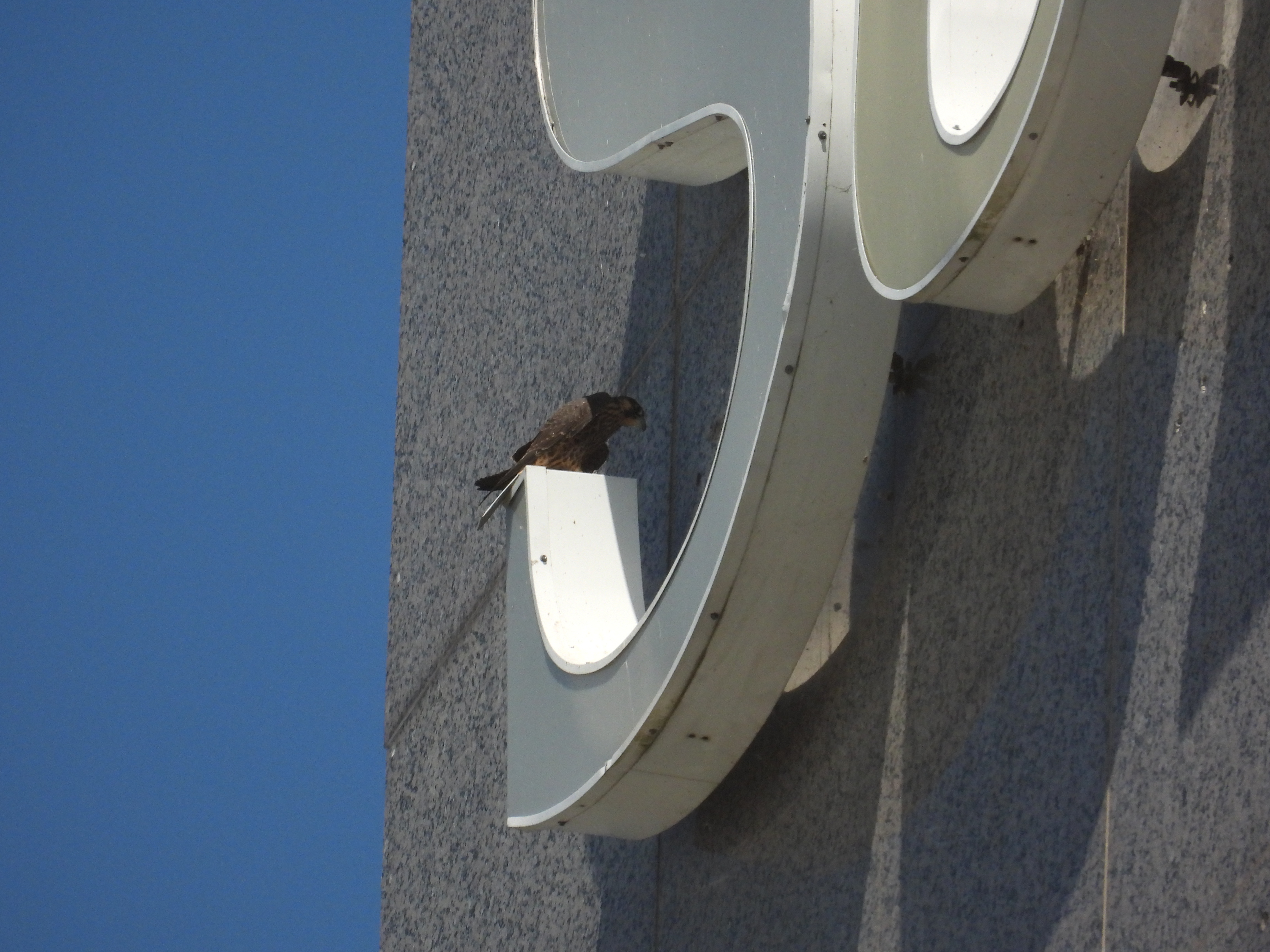 Juvenile female (yellow) perched on the S of the SunTrust sign. The bird’s rectangular tail guard is visible below her wings.

An hour later she flew west towards the Virginia Lottery building. We observed her make several laps around the surrounding buildings before she ultimately returned to the SunTrust building, landing on the roof on the west-facing side and, a few minutes later, on the roof of the south-facing side. She remained visible to in this position for a short period of time before walking out of sight towards the center of the roof.

While tracking the yellow juvenile we also observed other juvenile peregrines as they flew and received meals from the adults around the vicinity of the SunTrust building. The blue male spent a portion of the afternoon feeding on a prey item which was left on a window ledge of the south side of the SunTrust building. Another juvenile (red or orange)  spent a substantial amount of time perched atop the Bank of America building during the afternoon. At one point we also observed an aerial prey exchange between one of the adults and an unidentified juvenile.

In addition to monitoring the yellow fledgling and attempting to capture it, we consulted with the WCV and other partners to discuss the likely outlook for the bird. All are confident that the tail guard will fall off naturally over the next few days, as it is only lightly attached to the body feathers of the bird’s lower abdomen (near the cloaca) via masking tape, and not directly to the tail feathers. We will continue to monitor the bird over the course of the week in an attempt to verify that the tail guard has come off, and  will report any major updates. We are encouraged by the prediction for rainy weather later this week, as it may contribute to the guard’s falling off, if it has not already done so by that time.

Both the WCV and the DWR are also encouraged by the flight and landing skills that yellow displayed today. Given that she will be tended by the adults for some time to come, we are optimistic that this juvenile will not be impacted by this short-term inconvenience.