DWR biologists continue to monitor the yellow fledgling with the objective of documenting the loss of her tail guard.  See below for our most recent updates!

Following yellow’s release the day before, a DWR biologist spent over three hours tracking the juvenile falcons downtown. Beginning the survey at 2 pm, he quickly found three fledglings perched on different buildings. Yellow was on a window sill of the Riverfront Plaza West Tower, one story below her nest ledge, with her tail guard still visible. In speaking with the person occupying the office behind that window, he learned that yellow had been seen biting at her tail guard, a good sign as we hope that the guard will come off soon. 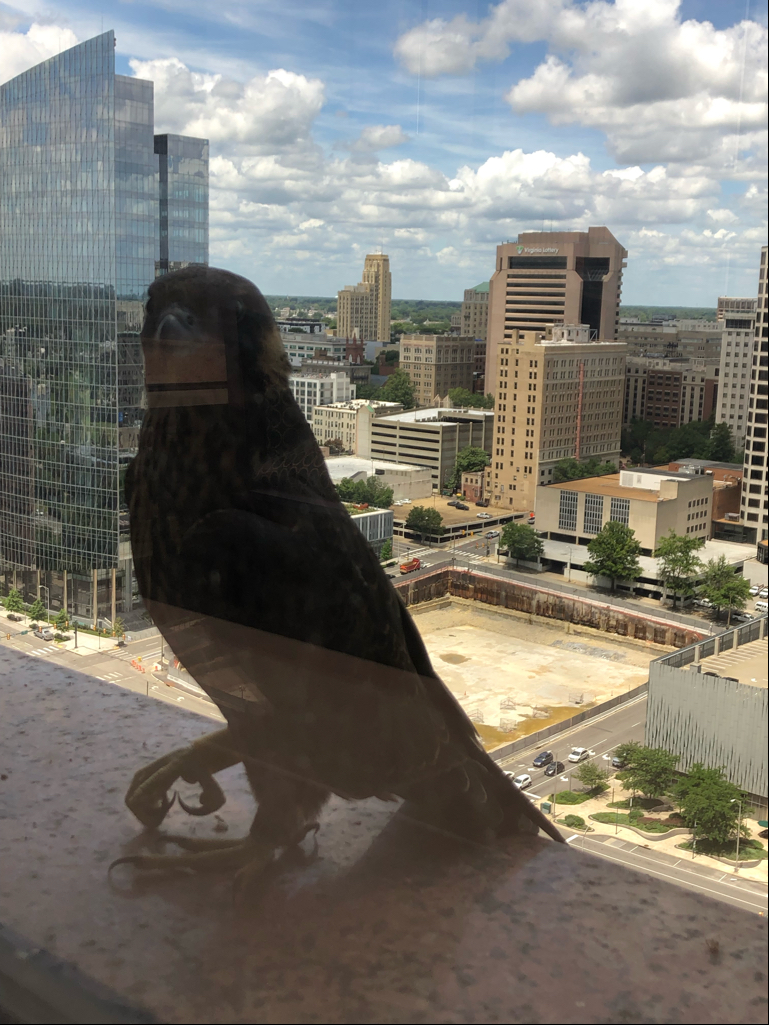 The biologist observed yellow in flight on multiple occasions, and last saw her flying north at 4 pm.  Orange was perched on the Bank of America building, where she remained for nearly three hours; after a few flights she settled atop a nearby building, and was still visible there on camera as late as 7 pm.  Blue was on the ‘S’ of the west-facing SunTrust sign, and was last seen at 3:20 pm.

The birds spent most of today on or flying around the SunTrust and Bank of America buildings which are within close proximity to one another. At one point around 10 am we were fortunate enough to have five out of the six falcons (this includes the two adults and four fledglings) visible from one vantage point—a rare treat for us considering it is nearly impossible to have each bird simultaneously accounted for with five staff members on site, let alone the two present today!

Each of the birds appears to be doing well as the adults are still delivering prey items to the fledglings who are continuing to perfect their flight and landing skills. The fledglings have shown remarkable improvement in their level of aerial competence within the last week, as their flights today appeared much closer in resemblance to the graceful and precise aerial movements displayed by their parents. We are also happy to report that we were able to identify each of the four juveniles at varying times throughout the day.  This marks the first time that red has been identified since he fledged on June 23rd. 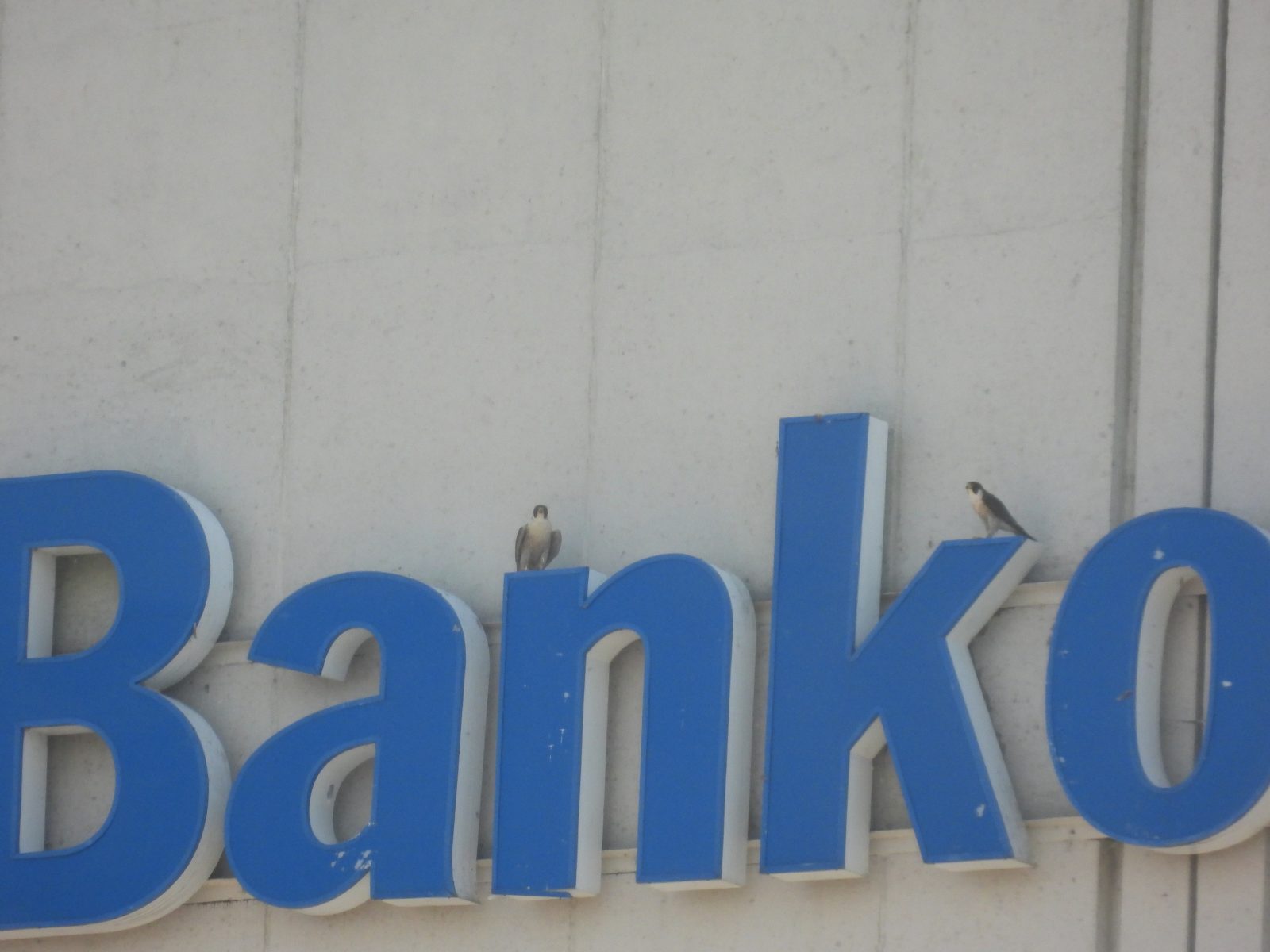 Adult female (left) and adult male (right) perched atop the west-facing sign on the Bank of America building.

Yellow was first detected flying overhead with the tail guard still in place mere minutes after we settled into our respective viewing positions around 8:45 am. We then spent a large portion of the morning searching for her, but it wasn’t until she was observed smoothly braking and landing atop the SunTrust building around 1 pm that she was relocated. At approximately 4:00pm she took off from this building and proceeded to gracefully circle and glide around the downtown area between the Riverfront Plaza, the Federal Reserve, the SunTrust building, and the surrounding cityscape. We observed her in the air for over 12 minutes until she ultimately disappeared from view behind the East Tower of Riverfront Plaza. Despite the tail guard still being in place, her flight and landing skills do not appear to be impacted as she seems just as competent in the air as the other juveniles are.

Red spent most of the morning atop the Bank of America building, first on the roof where he fed on a prey item delivered by one of the adults, followed by time spent perching on one of the building’s signs. 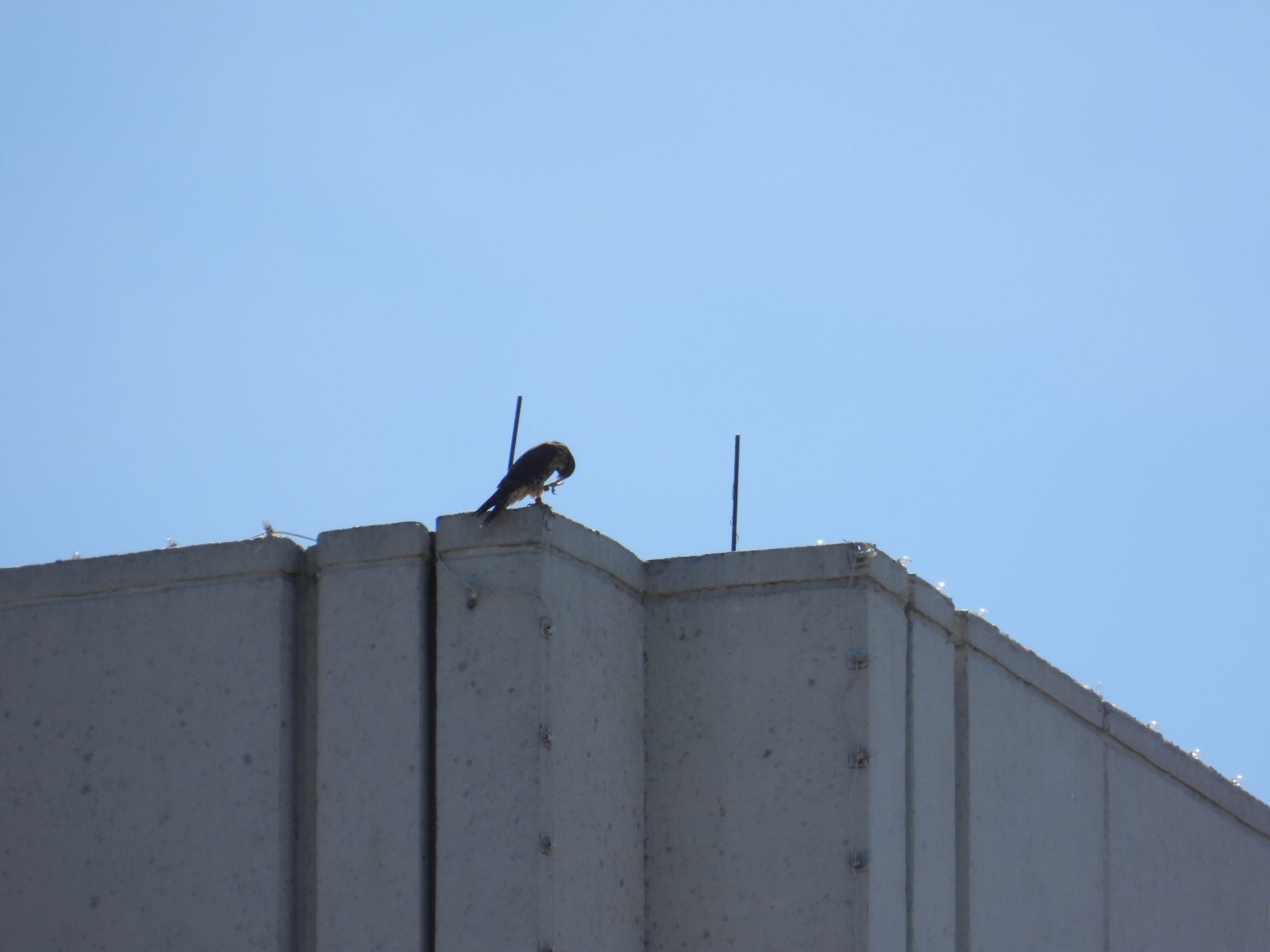 ‘Red’ shortly after feeding on a prey item atop the Bank of America building.

Blue was observed in the morning and then again in the early afternoon atop the capital ‘S’ of the SunTrust building. The latter was a particularly entertaining observation as he flushed one of the adults while coming in and ultimately ended up stealing the perch and flushing the adult to one of the Bank of America signs. 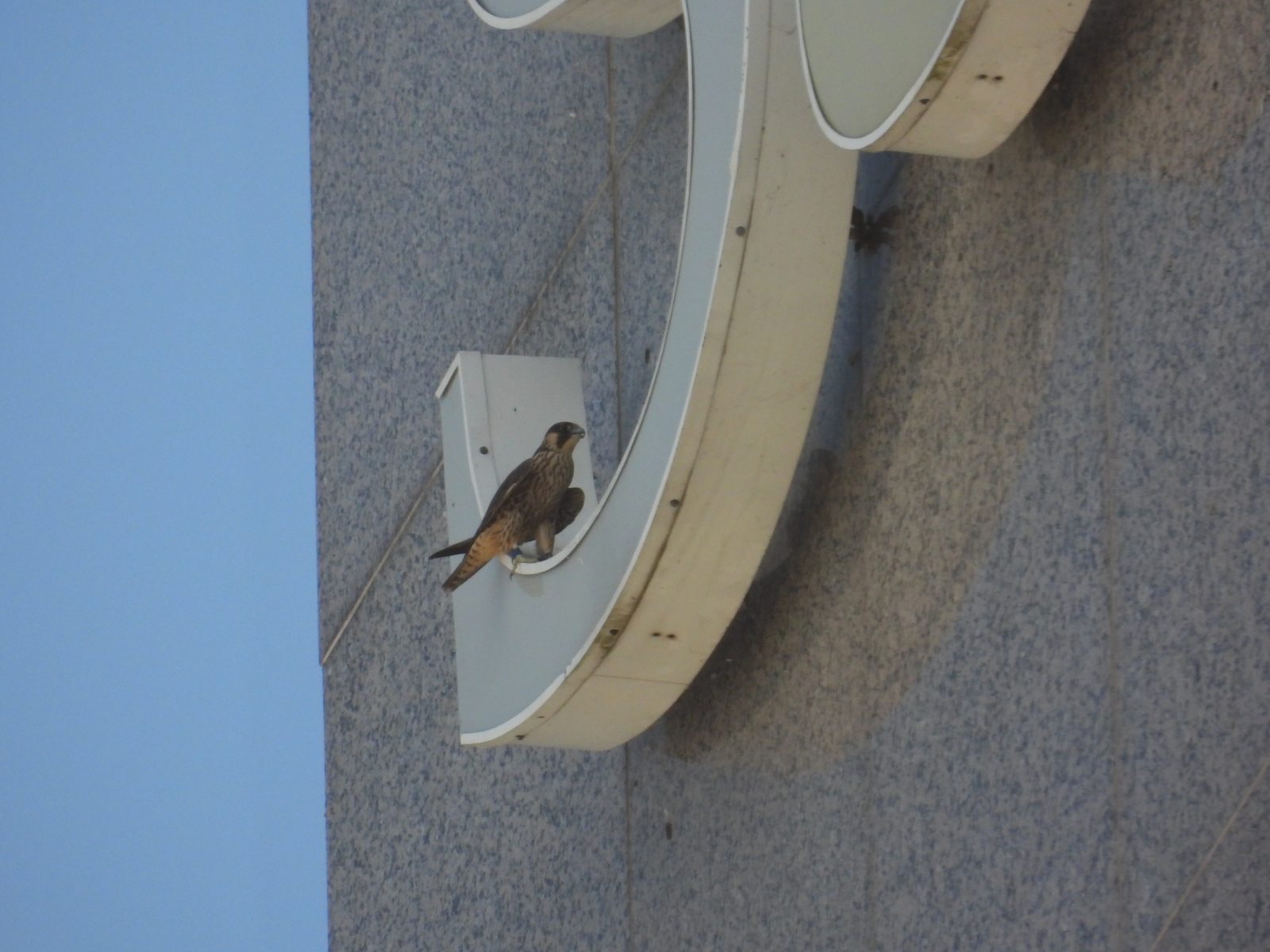 ‘Blue’ perched on one of the SunTrust signs after he displaced an adult from the same location. 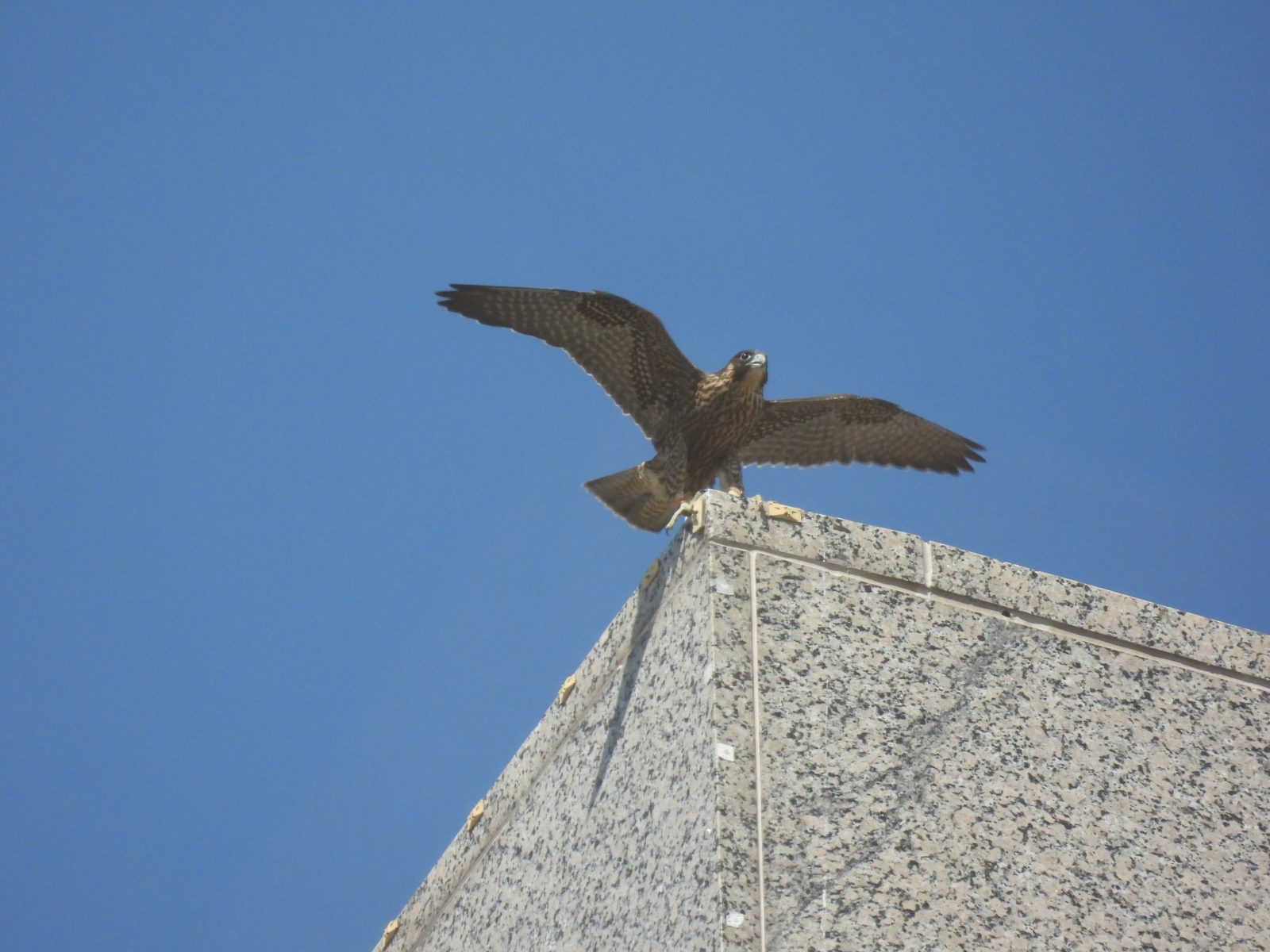 ‘Orange’ preparing to take flight from the roof of the SunTrust building.

Although our primary focus is to monitor yellow in the hopes of documenting the loss of her tail guard, we are happy to note that all four juveniles appear to be thriving. We will continue to provide updates based on our future observations.