Two DWR biologists spent the afternoon monitoring the fledgling peregrines on Friday, July 2nd. Three of the four juveniles were spotted by 11:00 am, each of which did not have a tail guard in place. Two of the juveniles were identified as orange and blue, while the third juvenile could not be immediately identified seeing as the colored electrical tape had fallen off of its band. As a reminder, this tape was put on the birds federal bands on banding day to assist with identification of the birds both on camera and during Fledgewatch. This tape is temporary and falls off naturally within the weeks following fledging.

Around 1:15 in the afternoon a juvenile was detected feeding on a prey item at the southwest corner of the Bank of America building. After closer examination, this bird was determined to be yellow as a tail guard was observed on the bird and the yellow tape on her band was still clearly visible. This observation also confirmed that the bird observed earlier in the day without tape on the band was red. 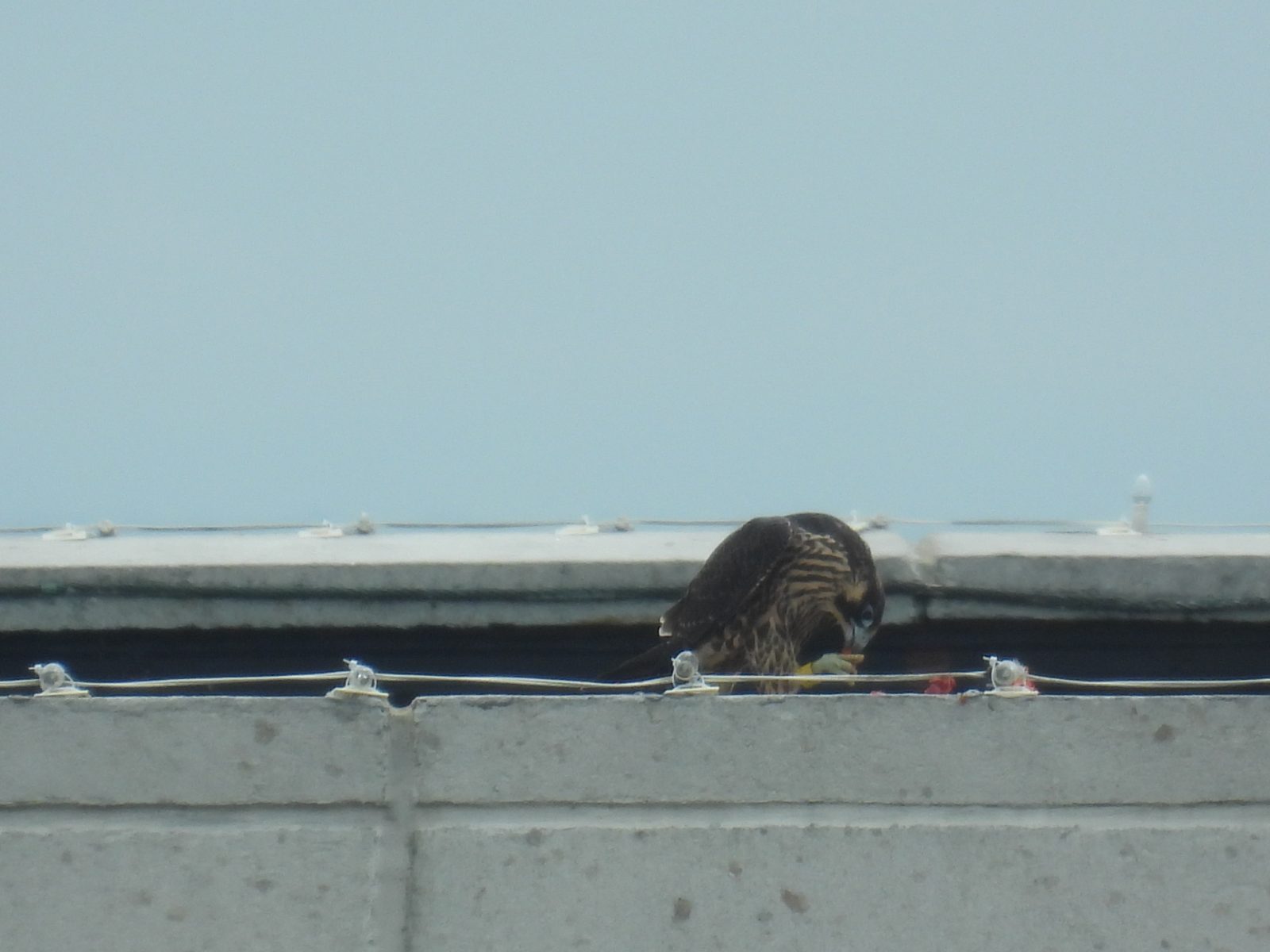 ‘Yellow’ feeding atop the Bank of America building.

We are happy to report that the birds are continuing to thrive downtown. In addition to yellow feeding atop the Bank of America building, orange was also observed feeding there, and at one point red was seen picking up a prey item and eating atop the symbol within the west Bank of America sign. 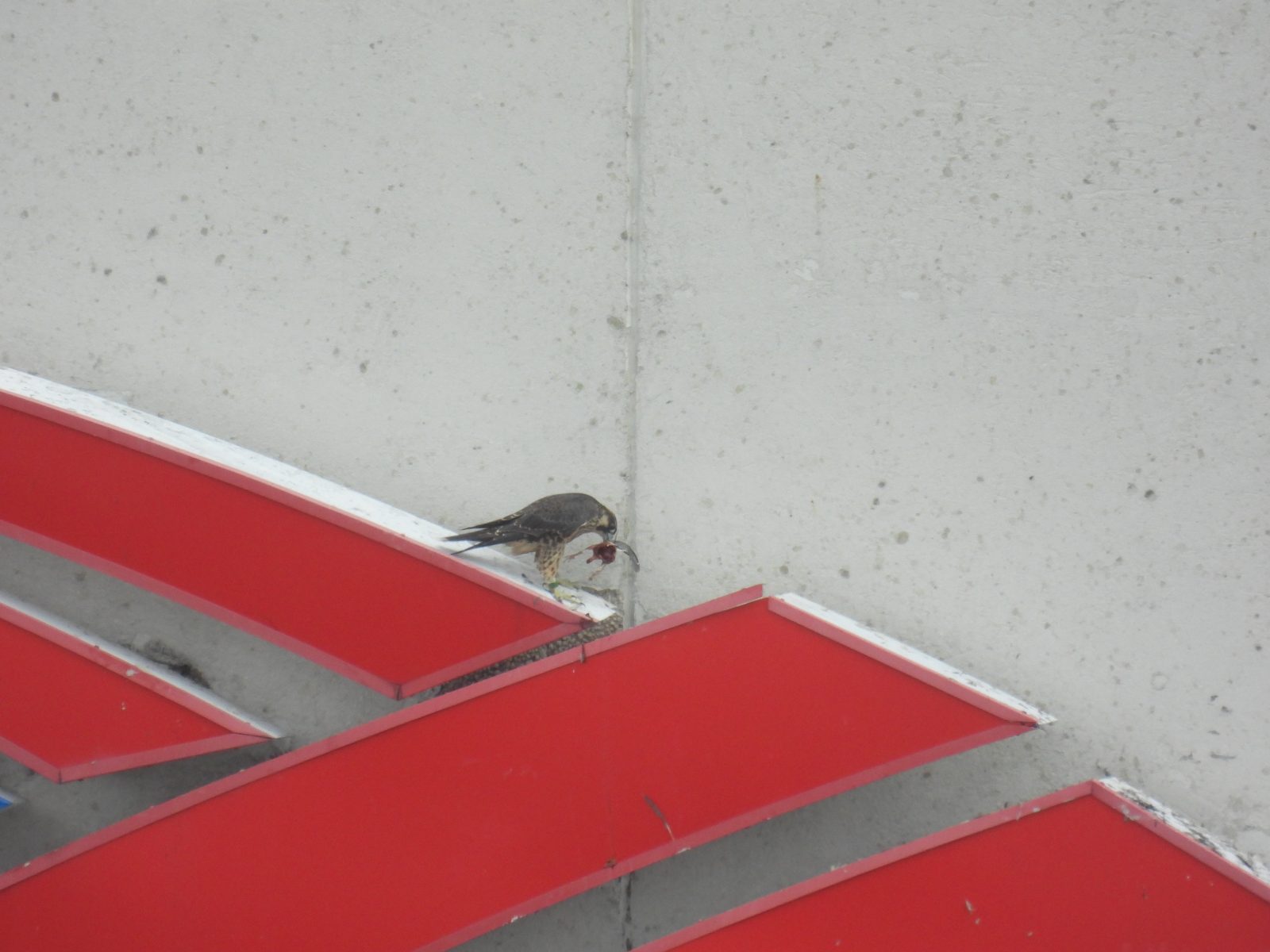 Red, whose colored tape has fallen off, with a prey item atop the Bank of America sign.

A major highlight of the day was observing yellow and red interact with one another atop the Bank of America building. We were able to photograph the interactions, so check out those images below. 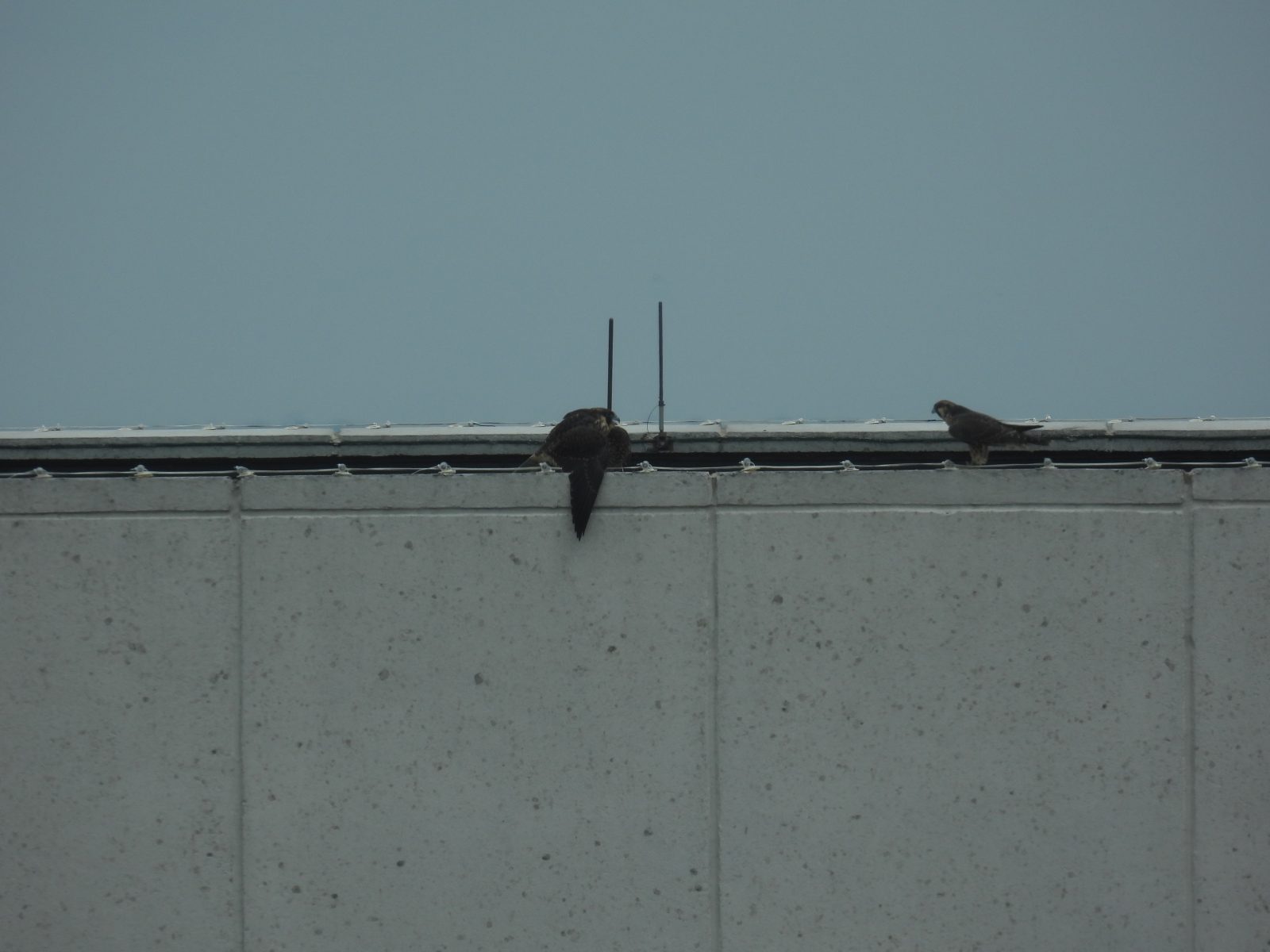 Red (right) approaches yellow (left) while she vocalizes and takes a defensive stance. 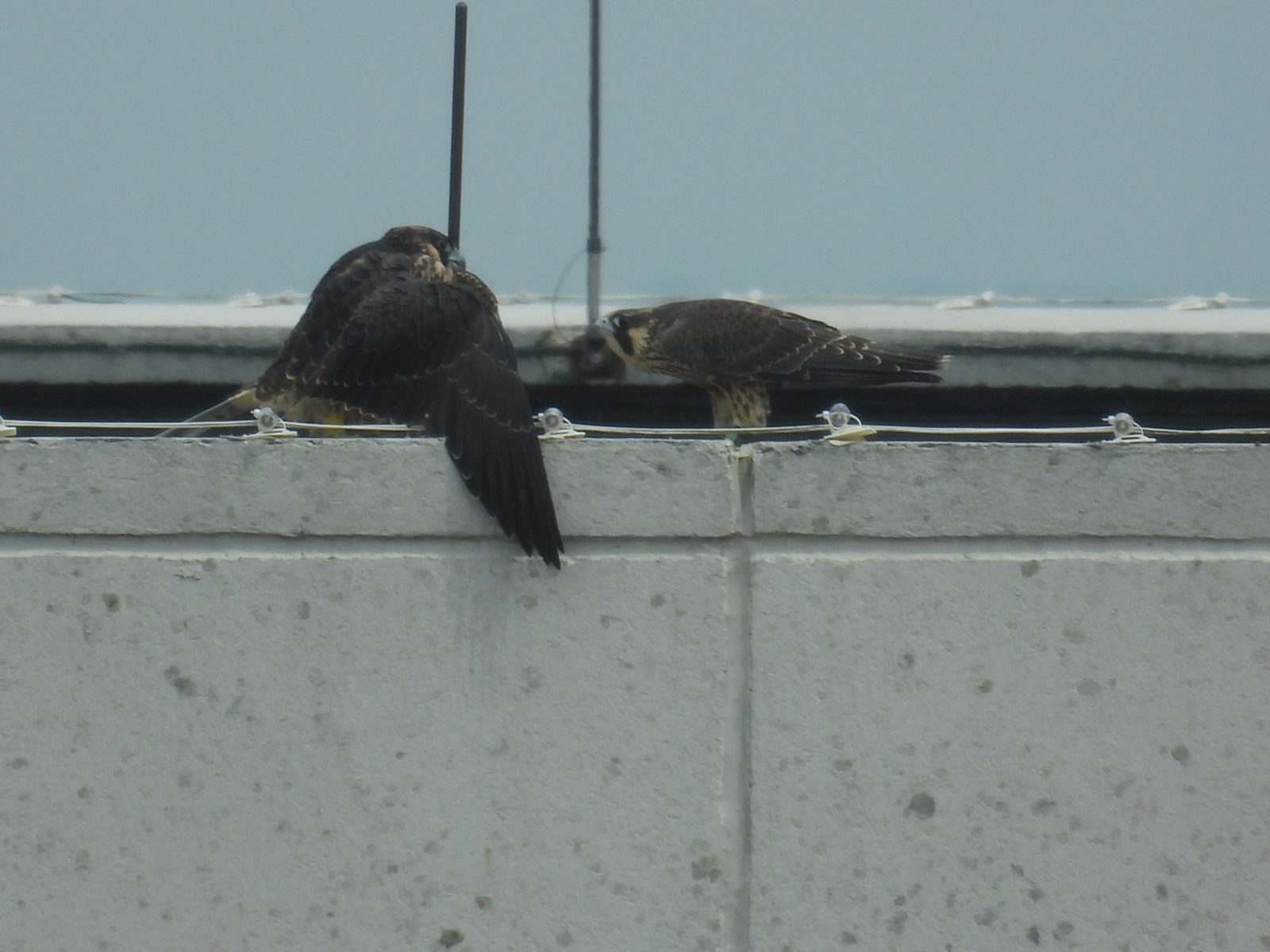 Red (right) gets closer to yellow (left) and bows to her several times while she remains defensively postured. 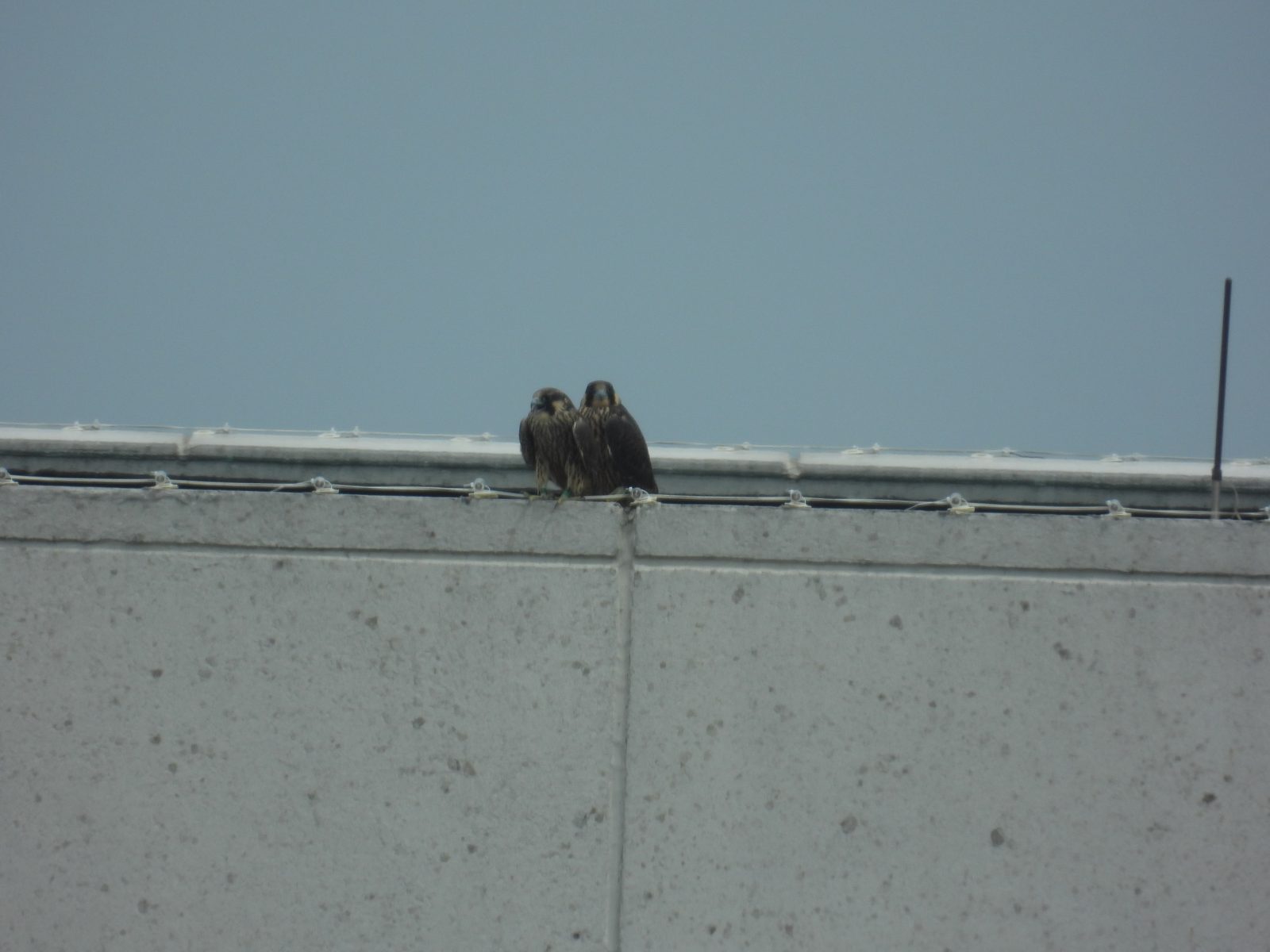 Red (now on right) perched closely next to yellow (left) atop the ledge.

Stay tuned for additional updates on the fledglings progress next week!