2021 has proven to be a truly monumental year for falcon viewing in Richmond. This season saw the return of last year’s breeding female, 95/AK, and her successful pairing with a new male, 59/BM. Together the two went on to hatch and raise a brood of four chicks, all of which fledged in late June. 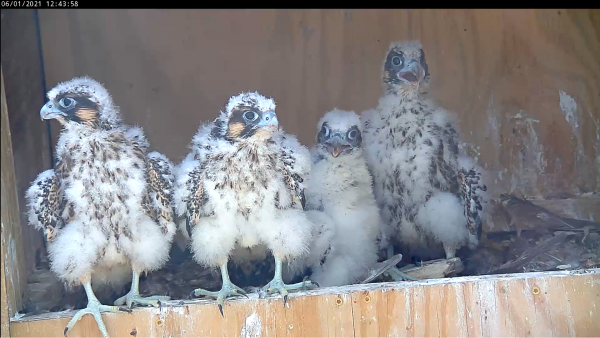 As far as we know, all of the juveniles are alive and well and have been spotted multiple times downtown throughout the course of the past month, especially in the first half of July. In addition to DWR’s regular monitoring efforts, we are fortunate to have a falcon cam viewer who works downtown and has been able to provide us with almost daily updates for a period of time on any sightings of juvenile peregrines. At their current age, it is not unusual for the juveniles to begin ranging farther from the vicinity of the nest site ahead of dispersal and as such, there have been fewer sightings of the birds in recent weeks. Even though falcon sightings in Richmond appear to be winding down, there have been several instances in past years when we have received reports of falcons banded in Richmond being spotted in other states. Most recently this occurred in 2017, when a juvenile male falcon (and half-sibling to our current breeding male) was spotted in New Jersey six weeks after fledging the nest box in Richmond. Should we receive any notable reports of additional sightings or status changes on the falcons we will provide an update to the blog. 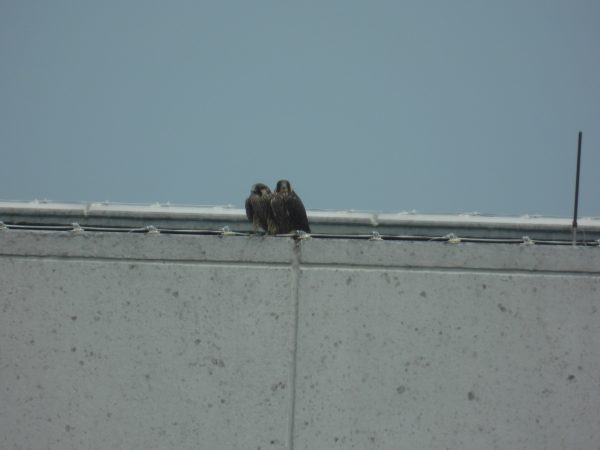 Two juvenile falcons perched atop the Bank of America building.

Following the release of ‘yellow’, we have continued to monitor her activities around Richmond in an effort to document the status of the tail guard. The last observation of ‘yellow’ came from our volunteer viewer on July 21, during which time he observed the tail guard to still be in place. He also spotted falcons on July 23, 27 and 30 but could not discern whether a tail guard was present.  No falcons were observed during a 3 hour DWR survey on July 30.

At this time, we do not know whether the tail guard is still in place.  However, this guard is not designed to be permanently affixed to the bird and we have been assured by the Wildlife Center that it will eventually come off on its own. Considering the prowess showed by ‘yellow’ in flight, and the fact that her flight behaviors are indistinguishable from those of the other juveniles, staff from both DWR and the Wildlife Center of Virginia remain confident that there will be no long term adverse effects due to the temporary presence of the guard.

With the nesting season having concluded and the juveniles nearing dispersal, the Falcon Cam stream will be turned off on Friday, August 13th. The stream will be turned on again early next spring so that we may bring you what we hope will be another successful peregrine breeding season. Thanks again to our partners at Comcast for their sponsorship, to our volunteer FledgeWatchers, and to all of the viewers who tuned in this season. We hope to see you again next year!