At approximately 3 1/2 weeks old, the eyases (falcon chicks) are now large enough to be banded! We (Virginia Department of Wildlife Resources biologists) are planning on accessing the ledge on Thursday, May 26 (pending suitable weather) to band the chicks and install the pen that is used to prevent premature fledging events. In the event that banding needs to be re-scheduled due to inclement weather, a notice will be posted on this blog entry announcing the new date. 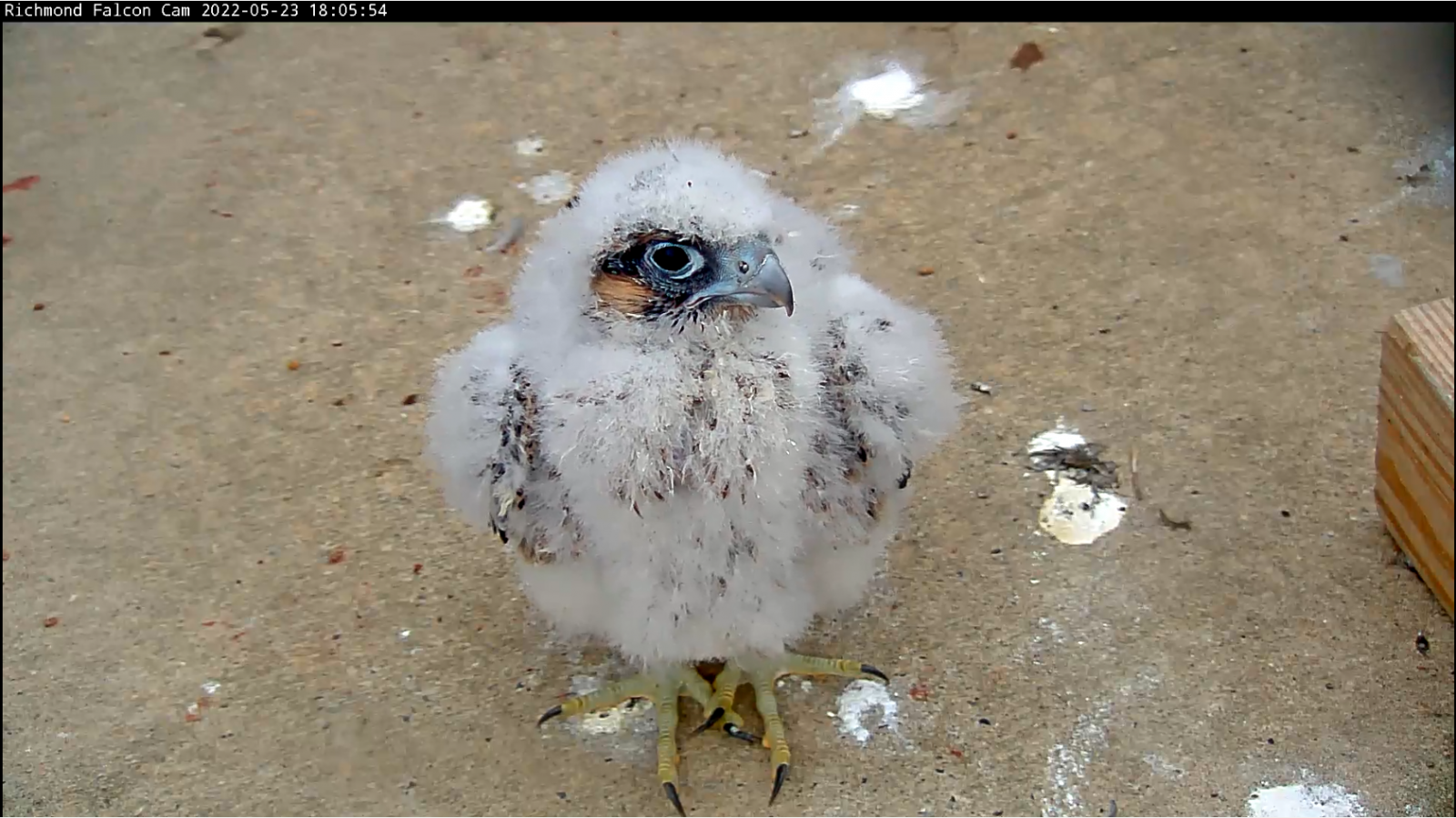 A close-up photo of one of the chicks provides a better look at its developing feathers.

Since hatching, the eyases have grown dramatically in size, with both feathered ‘eye masks’ as well as wing primaries now visible in addition to their white down. Additional body feathers, which when fully grown-in will give the chicks a brown, mottled-looking appearance, have already begun emerging beneath the down. In addition to feather development, the chicks have been exercising their muscles, regularly stretching their wings and practicing tearing off pieces of meat from prey items that have been delivered by the adults. 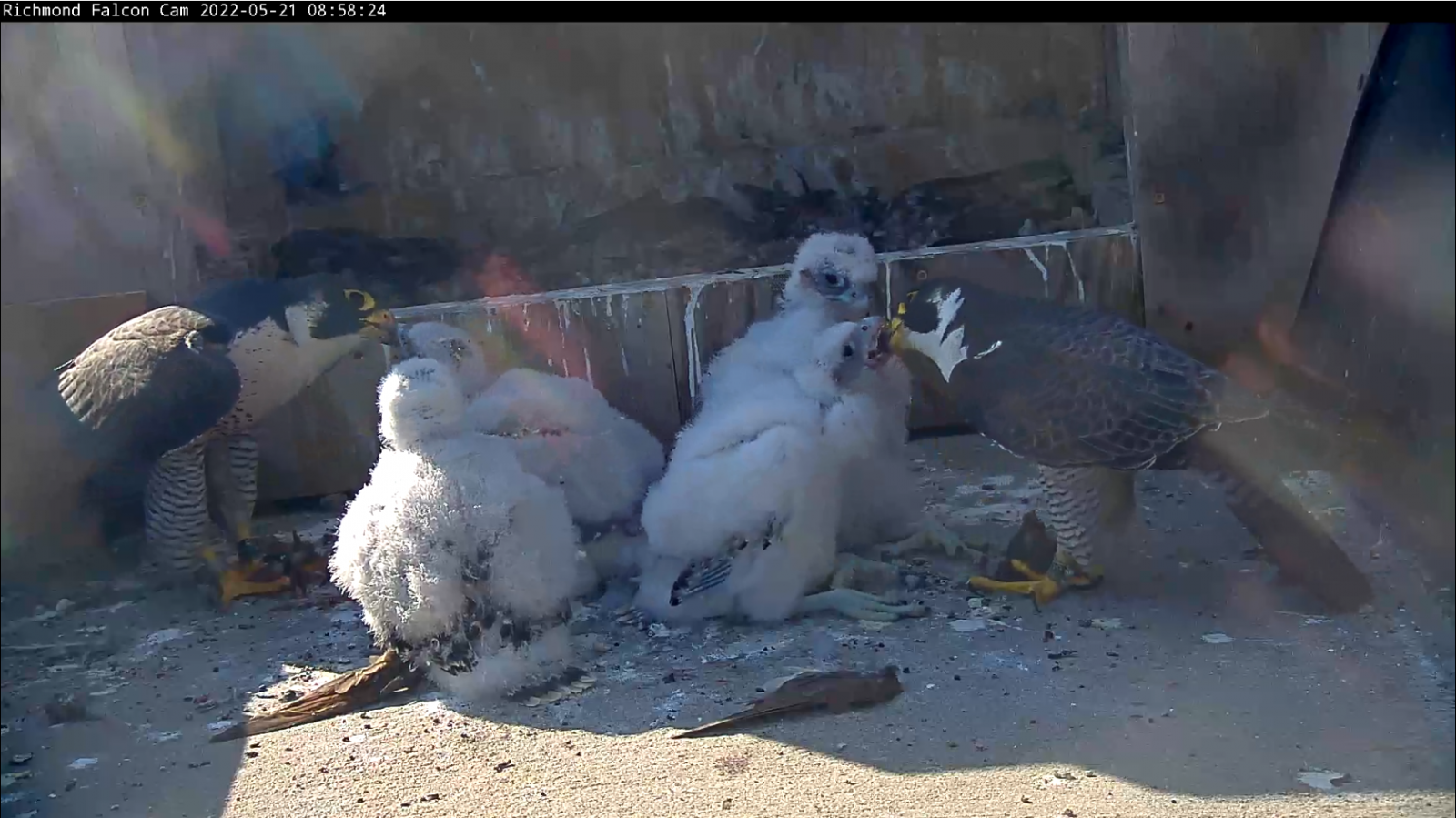 Now that they are able to come in and out of the nest box, it is likely that they will spend more time out of the box and on the ledge — especially as they become more mobile. This is a normal part of peregrine falcon chick development and has regularly taken place in past years with other broods. Don’t be alarmed if some or all of the chicks are at any point not in view of the camera! There are several other structures along the ledge which they can rest under, and the adults will continue to keep watch of the ledge as well as deliver prey items to their offspring.

On banding day, the camera will be turned off temporarily while biologists are on the building ledge. The eyases will be collected and brought inside where they will be weighed, measured, and fitted with two aluminum bands. 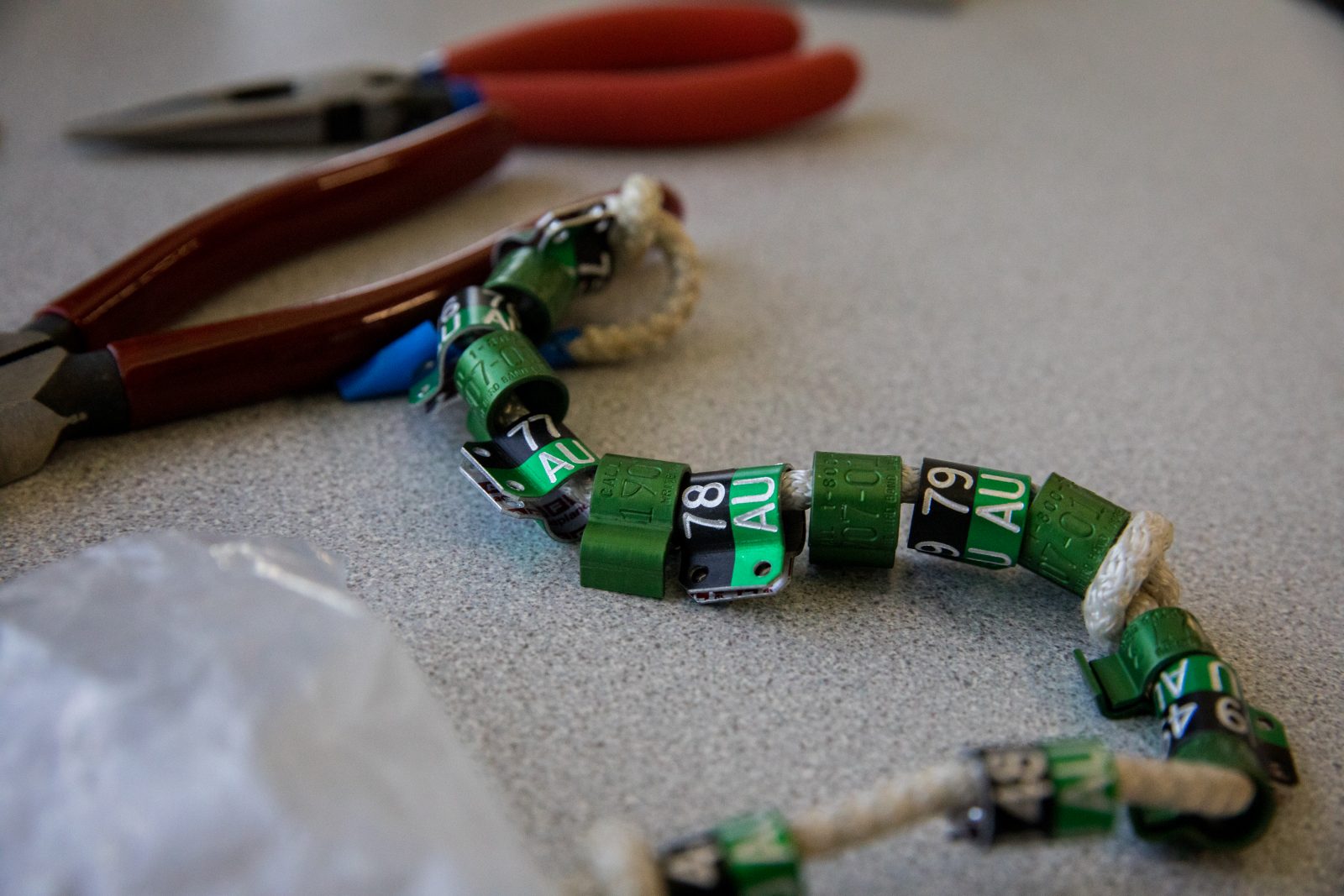 Each falcon chick will receive two bands, a solid green band as well as a “field-readable” black/green band.

In addition to banding and data collection, biologists plan to install the pen that has been used in previous years to prevent early fledge events. The pen will be placed in front of the nest box and will allow the chicks to continue to access the box. This pen is a precautionary measure to ensure that no premature flights take place before the chicks have fully developed their flight feathers and are therefore able to fly. Based on experiences in previous years we have observed that as the eyases become more mobile, they often spend time perched on the ledge wall where they are vulnerable to losing their footing and exposure to gusts of wind which may cause a chick to become airborne before it is able to fly. In such situations the chick may be able to glide safely to the ground without injury, but its inability to fly leaves it highly vulnerable to vehicular traffic on busy city streets. Use of the pen for this purpose is similar in concept to hacking, a technique regularly used to reintroduce young falcons to areas where they have historically nested.

Once banding and data collection has been completed, the chicks will be returned to the nest box and the camera will be turned back on. Be on the lookout for a follow-up post that will announce the sex of the chicks, their alphanumeric band codes, and their measurements.

And, if you want to see what exactly happens on banding day, check out the video we produced last year which shows all of the behind-the-scenes action!