Day Three of FledgeWatch began at 7:10 am at Kanawha Plaza, where a juvenile was quickly spotted along the catwalk of the Dominion building where we had last seen Red yesterday evening. The bird was intent on consuming a prey item and although it is likely that this fledgling was Red, we cannot confirm it as its legs were not visible. Both adults were also present throughout the morning, alternately seen in flight and perched on the Truist (formerly SunTrust) and Dominion buildings.

By 8:30 am, and within minutes of the arrival of an additional staff member, a juvenile was spotted atop the roof of an 11-story residential building directly to the east of Riverfront Plaza. The bird was quickly identified as Yellow, who had last been seen on Monday evening as it fledged on camera. As locating this bird was the primary objective of this additional day of monitoring, much rejoicing and high fiving was had by DWR staff on the ground. 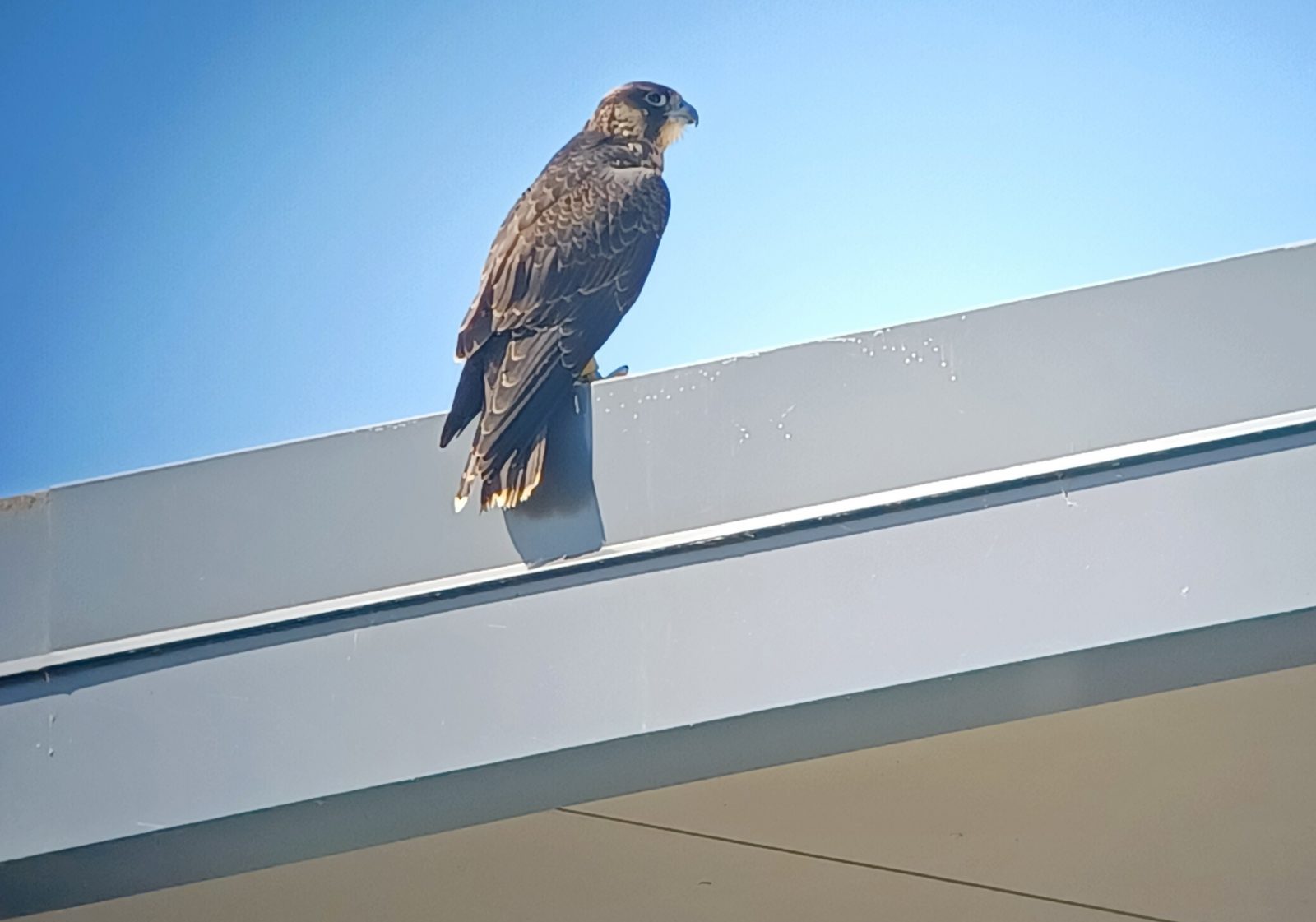 Yellow perched on rooftop of building adjacent to Riverfront Plaza. 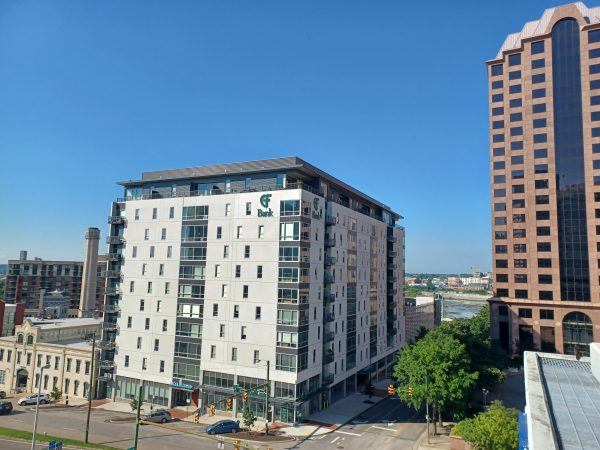 Residential building on whose rooftop Yellow was perched.

Following this observation, a flurry of falcon activity picked up around 9:00 am, with the adult female bearing prey on the wing in an apparent attempt to entice Yellow to fly. These observations were shortly followed by the detection of a second, unidentified juvenile landing on Riverfront Plaza East Tower.  A protective parent was seen striking a Black Vulture and later a crow.  And, at 9:30 am, Blue was spotted on the roof of the HCA Healthcare building before relocating to the top of the Towne Bank building at 10:00 am, where he spent the rest of our observation period.

Sometime before 10:00 am Yellow was seen taking flight, spurred by the adult female who landed near her on the roof. She immediately disappeared behind the building where she had been perched, but we believe that she landed somewhere on that same building, as some minutes later she was back in her original position without having been seen flying in.

Following these detections, we wrapped up our observation session by 10:45 am in exceedingly good spirits. With all four juveniles now accounted for, this year’s FledgeWatch has officially concluded. We are grateful to the property managers who graciously granted us access to their buildings, which gave us a much-needed bird’s-eye view of the downtown Richmond landscape. We also thank our partners at Comcast for their sponsorship and all of our viewers for diligently tuning in throughout the season!

The Falcon Cam stream will be turned off for the remainder of the year sometime next Friday, June 24, and we look forward to bringing you the stream again early next spring! In the event that we receive any major updates on any of the RVA falcons during the camera’s off-season, we will be sure to update the blog accordingly.

And, if you still haven’t had your fill of the falcons, fear not…you can always make a trip downtown in the coming weeks to see if you can spot the birds yourself!