After another long day downtown, Fledgewatch day two has come to an end with three of the four falcon fledglings having been located. Despite periodic intervals of rain, staff scoured the area in an attempt to locate each of the juveniles following yesterday’s activities but were unfortunately unable to locate Yellow.

However, we are happy to report that the three fledglings we were able to monitor are already showing improved prowess in flight with no failed landing attempts observed. Additionally, the adults were seen interacting with and delivering prey items to each of the identified fledglings. 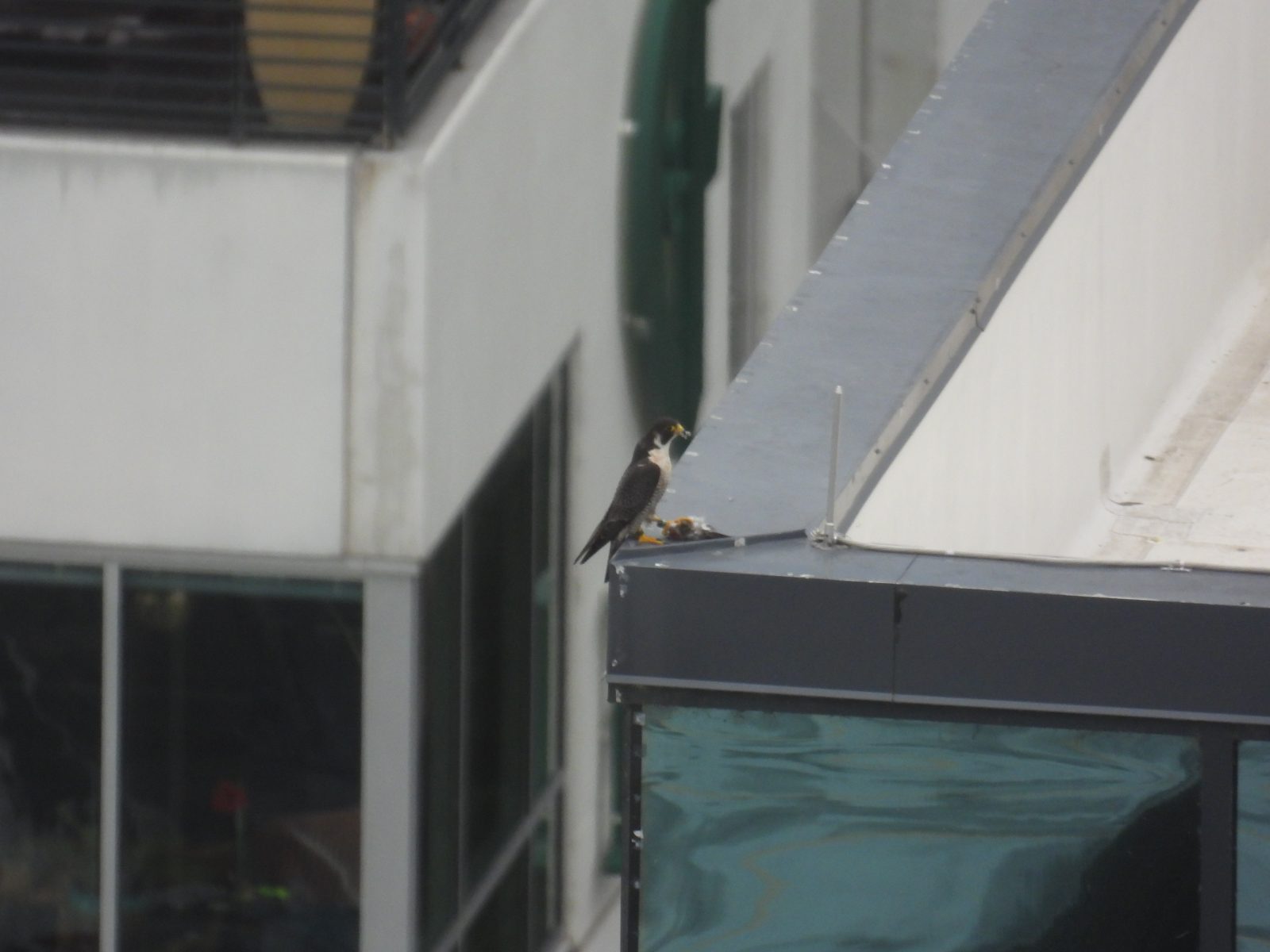 Adult male delivers a prey item to White atop the roof of the William Mullen’s building.

Efforts will be made to locate Yellow again tomorrow and in the event she is still not seen, an additional effort will be made next week to locate her. Additional details on White, Blue, and Red from the day’s observations can be found below:

White was the first fledgling of the day to be located. He was first observed atop the roof of the Riverfront Plaza’s East Tower within the first hour onsite. Considering he had been grounded in the street twice during yesterdays monitoring, seeing him perched at that height was a good indication of improved flight/landing proficiency.  A prey item was delivered to him by one of the adults around 10:30 am which he readily consumed. At 11:15 am he took flight from this perch and was seen circling several of the surrounding buildings before staff ultimately lost sight of him.

Approximately one hour later and shortly after the rain had once again picked up, a juvenile falcon was spotted atop the Williams Mullen building’s roof — this juvenile was later identified as White. He remained in place at this location for the remainder of the day and was observed numerous times vocalizing to the adults as they flew overhead and hopping up and down from a roof ledge. At one point in the afternoon a second prey item was delivered which he ate atop the roof. 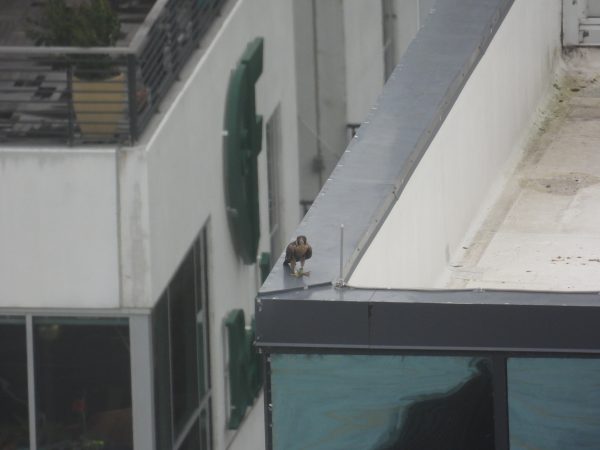 White, perched atop the roof of the William Mullen’s building.

Shortly after White left his morning perch atop the East Tower roof, another juvenile was observed circling overhead before coming in for a smooth landing atop the ‘K’ of the Towne Bank sign. Unfortunately, due to the position at which this juvenile was perched, it was difficult to discern the identity of this particular fledgling. After White was confirmed as the juvenile atop the Williams Mullen roof, staff speculated that this might be Blue based on a momentary glimpse of his band. However, it wasn’t until staff gained access to a better vantage point located at the 21st floor of the Riverfront Plaza’s West Tower that they were able to confirm his identify around 6:05 pm. Similar to White, the adults were observed ‘checking in’ on him throughout the day and delivered at least one prey item.

The camera was also pointed at Blue for the majority of the afternoon as it freed up additional staff to search downtown for the remaining fledglings while still being able to periodically check in on his location. 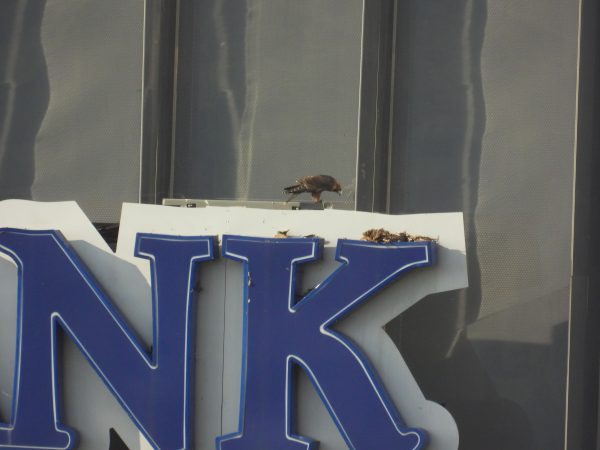 Blue examines a pile of cached prey items atop the Towne Bank sign.

Red was undoubtedly the most challenging bird to locate, and as such was the third and final fledgling of the day to be found. At approximately 2:15 pm, a staff member noted that there appeared to be a momentary instance where three falcons were observed in flight near the Dominion building. This is a very tall, structurally complex building which features numerous locations where a fledgling could perch and remain almost completely out of sight. No fledglings were located after an initial survey via binoculars and spotting scopes, however just a few minutes later the adult female was observed dropping off a prey item along a catwalk-like structure atop the roof. Thanks to this observation, staff were able to locate the third juvenile tucked up against the back side of the building along a mostly obscured ledge. This bird was later confirmed to be Red, who remained at this location for the remainder of the day. 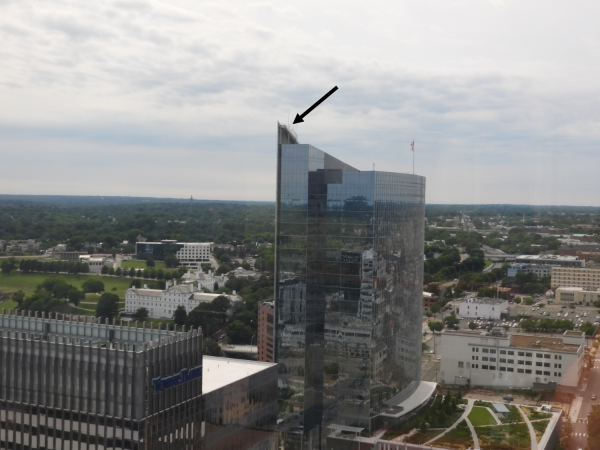 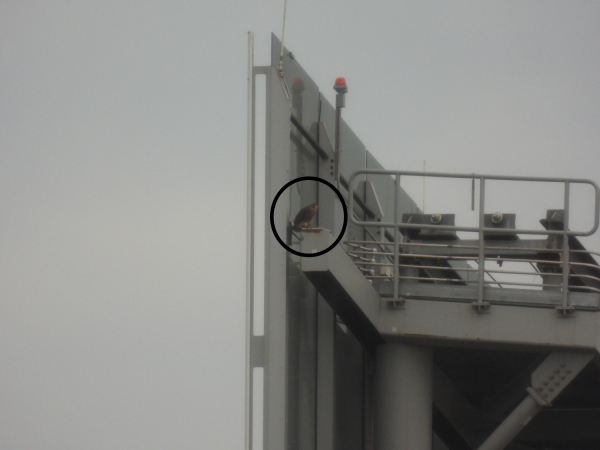 Red as seen on the Dominion building via 2000x optical zoom. The bird is located within the black circle.

Although we are ultimately unsure of Yellow’s current whereabouts, it’s worth noting that locating these birds just after fledging is very challenging as there are an endless amount of places where they can tuck away making them periodically impossible or near impossible to locate. Even with numerous staff on the ground and strategically positioned atop different buildings, it is not uncommon to exhaust an entire afternoon in search of a single fledgling.