Nothing is more disheartening to a pond owner than a fish kill. Fortunately, they are rare in most ponds, but no pond is completely immune to them. Fish kills can be partial or complete and are caused by a variety of factors including low dissolved oxygen, pollutants, disease, temperature extremes, or natural mortality. It’s not always possible to avoid a fish kill, but in most cases there are warning signs that the pond owner can look for and correct before it’s too late.

Low dissolved oxygen is the most common cause of fish kills in ponds. Contrary to popular belief, fish kills are never caused by natural over-population. A pond will naturally stay within its capacity to support fish under normal conditions. Low oxygen levels usually result from combinations of weather conditions and pond characteristics that fall into one of the scenarios described below. The most obvious sign of an oxygen problem is fish gasping at the surface, particularly in the early morning. Once the problem has reached this point, aeration is the only suitable option a pond owner has to prevent a fish kill. To prevent the problem from recurring, determine which of the scenarios listed below describes your situation and correct it as soon as possible.

At moderate levels, aquatic vegetation is beneficial to fish populations. But when it covers more than ½ of the pond, the potential for a fish kill is greatly enhanced. Plants produce oxygen during the day when there is sunlight, but not at night. During the night, plants, fish, insects, and naturally occurring bacteria use oxygen for respiration. If the oxygen produced during the previous day is insufficient to carry pond life through the night, a fish kill will result. As long as the weather is sunny, oxygen production is usually adequate. However, several consecutive calm, cloudy days can reduce the pond’s oxygen level to a point where fish may not survive the night. These types of kills usually occur during warm weather. The best way to avoid this problem is to prevent weeds from covering more than ½ of the pond. See Aquatic Vegetation section for more information.

Improper Use of Aquatic Herbicides

Excessive plant growth must be controlled gradually. Treating too much of a pond with herbicide at one time creates too much decaying plant matter, providing an abundance of food for bacteria. The bacteria grow and reproduce quickly and can easily deplete oxygen in the water. To avoid this problem, never treat more than one-third of a pond (less is better) at a time with herbicide. If multiple treatments are necessary, wait at least 2 weeks between treatments to allow for complete plant decomposition.

As discussed in the water quality section, microscopic phytoplankton are the base of the food chain, and their abundance determines a pond’s capacity to produce fish. The higher the phytoplankton population, the higher the fish populations. But like anything else, you can have too much of a good thing. If your pond receives excessive nutrients from runoff, phytoplankton can become overabundant and cause some of the same problems as rooted plants. Phytoplankton are overabundant when pond water becomes so green that water clarity is less than 12 inches. This can cause the same type of extreme oxygen cycling described above for rooted plants. If the phytoplankton suffer a sudden die-off, rapid decomposition can cause oxygen depletion and a fish kill. If your pond receives excessive nutrients and suffers from excessive phytoplankton blooms, take care of the problem before a fish kill occurs. The best solution is to reduce nutrient inputs from the watershed.

In residential areas where landscaping (and thus lawn fertilization) is extensive, excessive nutrients commonly enter neighborhood ponds. The best solution is to reduce fertilization and increase the use of xeriscaping. Xeriscaping is the use of landscaping techniques that minimize fertilization and irrigation requirements. It emphasizes the use of drought tolerant native plants that are adapted to local soil conditions. For more information on xeriscaping, contact your local County Extension Agent or the Department of Conservation and Recreation’s Division of Soil & Water Conservation. Planting and annually cutting native wetland plants such as cattails can also reduce the availability of nutrients to the plankton. However, some folks may consider these plants a nuisance. A diversion ditch could work here, but remember, this will reduce water flow to the pond. 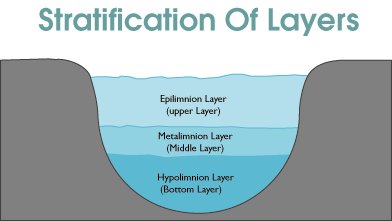 During summer, the heat and relatively calm weather causes pond water to stratify into layers (Figure 5). There is a less dense, warm, upper layer that is exposed to the sun and atmospheric oxygen (epilimnion), a very thin layer where temperature and density changes rapidly (metalimnion), and a cold, denser, lower layer that receives little sunlight and does not mix with the upper layers (hypolimnion). Because it does not mix, the hypolimnion has no incoming oxygen to replace what is used by bacteria that are decomposing dead animals and plants on the bottom of the pond. As the summer progresses, the hypolimnion usually loses its oxygen. If a storm carrying cold rains causes the pond to turn over (mix suddenly), the de-oxygenated water in the hypolimnion can reduce the oxygen level of the pond enough to cause a fish kill. Ponds with the proper maximum depth (6-12 feet) are less likely to have this kind of kill because they have a smaller hypolimnion. 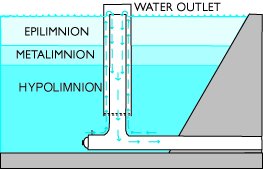 In ponds with a vertical standpipe (also called a riser), an easy way to reduce the size of the hypolimnion is to install a pipe over the existing standpipe so that pond overflow is drawn from the bottom of the pond instead of the top. (See Figure 2 on page 6.) Aerators or anti-stratification pumps can also be used to prevent or reduce stratification and associated fish kills, but electricity costs can be prohibitive.

Fish kills caused by pollution in ponds are rare. Aside from livestock wastes, which were discussed earlier, the most common pollutants that cause fish kills in ponds are pesticides. Pesticides can enter a pond with storm runoff from an agricultural field, orchard, golf course, or residential landscaping. They can also reach a pond by drifting through the air during crop dusting or spraying. Because pesticides are extremely toxic to fish, great care must be taken to keep them well away from ponds. If there is a farm in your pond’s watershed, discuss your concerns with the farmer and watch the pond closely when pesticides are being applied. If you use pesticides yourself, be careful to clean your mixing and spraying equipment in an area where runoff will not enter a pond. Although less common, herbicide pollution can cause an oxygen depletion by killing phytoplankton, rooted aquatic plants, or both. Pollution can contaminate living fish and make them unsafe to eat, but this is rare in private ponds. Unless your pond is impacted by industrial pollution, livestock wastes, acid mine runoff, or golf course drainage, it is highly unlikely to have a problem of this nature. If you think you have a pollution problem, consult with the Virginia Department of Environmental Quality. If they can’t provide direct assistance, they can provide you with a list of private consultants.

Fish kills resulting from disease usually only occur when fish are overcrowded. Although overcrowding can occur naturally during a drought when water levels are low, it’s usually the result of overstocking by man. Follow the recommended stocking rates in this brochure and you shouldn’t have a problem. If necessary, diseased fish can be treated with a medicated feed (if you feed your fish), but the improvement will only be temporary if the underlying problem is not addressed. Parasites generally do not cause fish kills. They are common in fish and usually cause them little harm. Because parasites have complex life cycles, attempts to control them are usually futile. Parasites often form cysts (commonly called grubs) in the fillets and make them unappealing for eating. However, properly cooked fish cannot transmit any bacteria or parasite to people who eat it.

Except for ponds with trout, water temperatures rarely cause sportfish kills in Virginia. Temperatures are usually not low enough to allow ice to cover ponds and cut off oxygen for extended periods.