Important Notices for this Waterbody

Amelia Lake is a 100-acre impoundment located entirely within Amelia Wildlife Management Area in Amelia County, Virginia. The lake is owned and managed by the Virginia Department of Game and Inland Fisheries. The impoundment is located close enough to Richmond for convenient access to boating and fishing or other recreational activities on the management area.

Amelia Lake is managed to provide a warmwater fishery comprised of largemouth bass, channel catfish, black crappie, bluegill, and redear sunfish. The lake has an over-abundance of largemouth bass, which results in high catch rates of small fish for anglers. This impoundment is well suited for beginning anglers who are interested in catching fish that aren’t necessarily trophies. Though the potential to catch a trophy largemouth bass still exists.

Amelia Lake can be reached by travelling on 360 to State Route 604 North. Once on 604, simply follow the signs to the lake. 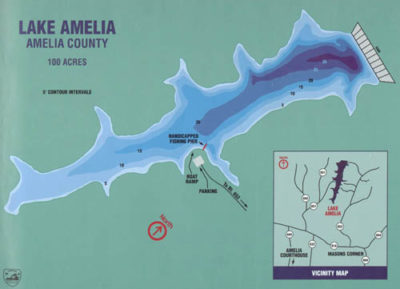 The Amelia Lake largemouth bass population currently exists in a very unbalanced state dominated by high numbers of small fish. Densities of bass collected in our samples (measured in number of fish per hour of electrofishing) reach levels over 500 bass per hour. Normal densities in comparable lakes in the Southeast are much lower at around 100-150 bass per hour. With densities of fish this high, food and other resources become limiting in the system and growth of the fish suffer. The end result is a population of bass over-run with fish around eight to ten inches. To combat this overcrowded bass population, the size limit restriction that was in place at Amelia was lifted in 2001 to encourage harvest and reduce numbers of bass in the system. Currently there is no size limit in place at Amelia Lake.

The impact of largemouth bass overcrowding not only results in stunted largemouth, but also has an impact on the panfish species (bluegill and other sunfish) in Amelia Lake. Due to the high numbers of bass preying on the sunfish in the lake, numbers of panfish are greatly reduced. Fewer panfish in the system result in less competition for food for those that remain and thus better growth potential. Overall, numbers of sunfish in Amelia are down but the average size is on the rise. Good-sized sunfish are currently available to anglers and with the high numbers of bass in the system, should continue for a while. Black crappie are also present in Amelia Lake in limited numbers. Growth rates of crappie are about average for Piedmont systems.

There is a limited catfish fishery at Amelia Lake even though channel catfish are stocked each year.

Amelia Lake boasts fair numbers of catchable size Black Crappie. Fish up to 12 inches have been collected in recent samples. In recent years, White Crappie have also been stocked in the lake in an effort to improve the fishery.

The following are prohibited on this property:

Hours of use: 24 hours per day

Fish stocking to supplement existing fisheries is performed on an annual basis. Channel catfish fingerlings are stocked every year at a density of 15 fish per acre.

In an effort to provide better fishing opportunities, several hinge trees were felled at Amelia in 2004. In addition, Christmas trees have been sunk each winter since 2004 near the fishing pier and other sites on the lake to provide cover for sunfish and hopefully increase catch rates for Amelia anglers.