Briery Creek Lake is an 845-acre lake that is owned by the Virginia Department of Game and Inland Fisheries and is within the Briery Creek Wildlife Management Area in Prince Edward County. The dam was completed in 1986 and the lake was open to fishing in 1989. In 1986 and 1987 the lake was stocked with Florida strain largemouth bass, northern strain largemouth bass, bluegill, redear sunfish (also known as shellcrackers), channel catfish, and crappie. Timber in the floodplain was left standing or felled and drumchopped resulting in an abundance of fish habitat. Biologists hoped that the presence of Florida-strain bass and the complex habitat would produce a high quality largemouth bass fishery. 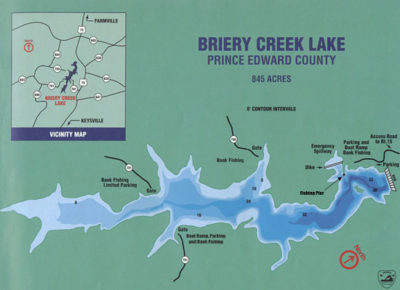 Briery Creek Lake is one of the most important largemouth bass fisheries in the state and biologists certainly treat it as such. Not only are annual electrofishing samples conducted, but creel surveys have also been used to gather information as well (angler effort, catch, harvest and attitudes and opinions on the fishery). Spring creel surveys (March thru May) are an effective method for following trends in fishing, particularly for trophy bass (greater than 22 inches). The creel data have given biologists the best information in evaluating this fishery and the trophy slot limits.

Overall, angler catch rates (number caught per hour of fishing) have remained remarkably consistent since 1999 (about 4 fish per 10 hours of fishing). This is a very good catch rate, particularly for the spring. What has varied is the catch rate of trophy bass which has declined due to Largemouth Bass Virus impacts and overcrowding of smaller bass. Recent catch rates for trophy bass has declined and efforts are underway to restore and improve this important aspect of the fishery.

The sooner the lake gets to 60 degrees, the sooner the fishing gets good. But it has to stay fairly constant. Anglers planning trips to Briery to target citation bass would be well served to shoot for the last week of March through April, but if it gets warm early, shoot for early April. Anglers are welcome to call the Farmville office or Worshams grocery for more information.

Briery is still one of the best waters in the state to chase 10 pound bass. But for those anglers who are not lucky enough to get a lunker, they should have a blast with 2-4 pound fish. We are collecting more fish over 15 inches than ever before. Hopefully some of these fish grow into trophies in the coming years.

Statewide fishing regulations apply for all other fish species.

Briery Creek Lake can be accessed off of Routes 790 and 701. Route 790 leads to a small parking area near the dam. Anglers may fish from the dam, which is mowed twice a year. At that parking area is a kiosk which provides visitors information on the Briery Creek Lake Wildlife Management Area, as well as information on fishing regulations. Just beyond the dam on Route 790 is a concrete boat ramp (with courtesy pier) with a large, paved parking area and two porta-john facilities. Fishing from the shoreline is limited here. Route 790 ends on a large peninsula that offers tremendous shoreline access for anglers not fishing from a boat. There is also an unimproved (gravel) boat ramp that is ideal for anglers with small boats or canoes. Also on this peninsula is a covered handicapped fishing pier that was built in 1999 (pictured below). Fisheries biologists place Christmas trees around the handicapped pier as fish attractors. A handicapped porta-john facility is also located on the peninsula.

Route 701 leads to the other major access on Briery Creek Lake. At this area is a two-lane concrete boat ramp (with courtesy piers), a large, paved parking area, and porta-john facilities. Anglers without boats will find plenty of shoreline to fish. This area provides boat anglers easier access to the upper end of the lake.

Biologists sample Briery Creek Lake each spring with an electrofishing boat to monitor the fish populations. Largemouth bass have a balanced size structure (meaning a good balance of young “recruits” and adults), and grow fairly well. It takes largemouth bass about three years to reach 12 inches and about 8.5 years to reach 20 inches. Creel surveys are also used to collect information on the condition of the fish populations at the lake.

During creel surveys, anglers are interviewed as they leave the lake and asked things like how long they fished, what they caught, and what they harvested. It is also a great opportunity for biologists to get information on angler attitudes and opinions and determine what they would like to see done with the fishery. Here are some highlights from the creel surveys:

Although known widely as a trophy bass lake, Briery Creek Lake is also one of Southside Virginia’s best lakes for bluegill, redear sunfish, and crappie. Biologists also use electrofishing and creel surveys to monitor these populations and all are characterized by moderate to high abundances and fast growth. Angler catch rates for bluegill and redear sunfish are best from late April to June while crappie are typically best in March and April.

Chain pickerel are fairly abundant in Briery Creek Lake but most fish are less than 20 inches.

Tips for Proper Care and Handling of Trophy Bass:

Some anglers at Briery Creek Lake are fortunate enough to catch a trophy largemouth bass. Often times, anglers will keep their trophy in a livewell and travel to one of the local stores to have their fish weighed on certified scales. Still others may keep their catch in a livewell in hopes of catching a bigger fish later that day. Anglers not wishing to have their trophy mounted will release their fish at the end of their fishing day. However, this does not guarantee that the trophy will survive. Anglers may take precautionary measures to decrease the likelihood of delayed mortality of released fish.

Land the fish as soon as possible. Playing a fish to exhaustion diminishes its chance of survival. Having the proper fishing tackle is important.

Avoid excessive handling when landing a fish, removing the hook, taking pictures, measuring, etc. Always make sure that your hands are wet before handling fish.

To handle trophy fish, wet your hands, then use your thumb to clamp down on the bottom lip and support the fish’s weight by placing the off-hand under the fish (toward the tail). Do not hold the fish just by the lower lip.

Fish should not be out of the water for more than 30 seconds.
Proper handling and care of trophy largemouth bass will increase everyone’s chances of catching a trophy bass.

For information on the Town of Farmville: